My wife and I moved a our 4 year old Red Baron Peach yesterday. Here is a short time-lapse of us doing it. 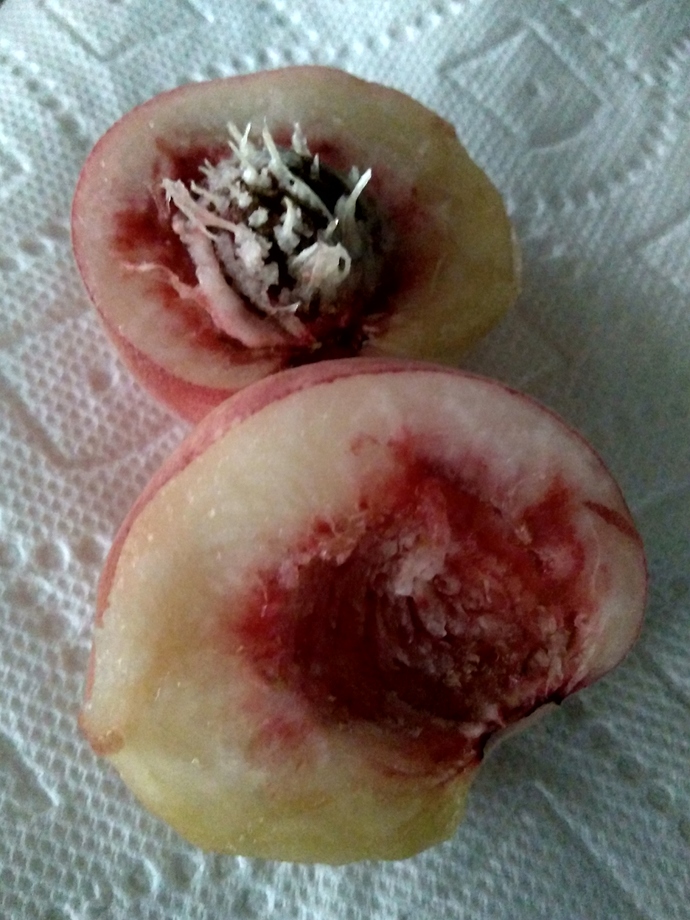 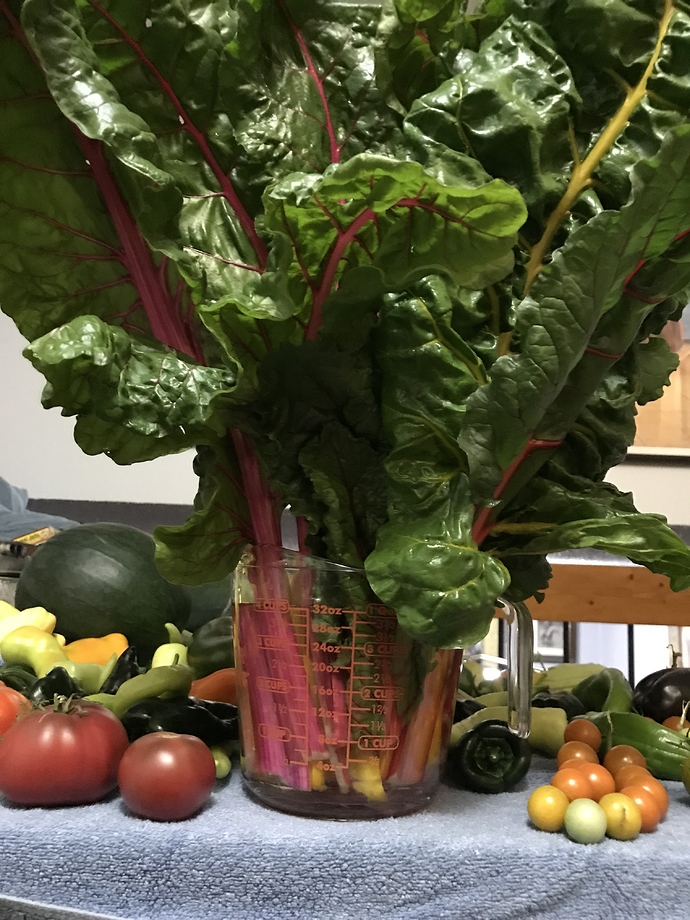 That chard is just gorgeous! better than a vase of roses!

Funny you mention that, My sister in law arranged that! and funny enough mentioned that she wanted us to grow chard for her wedding arrangement. 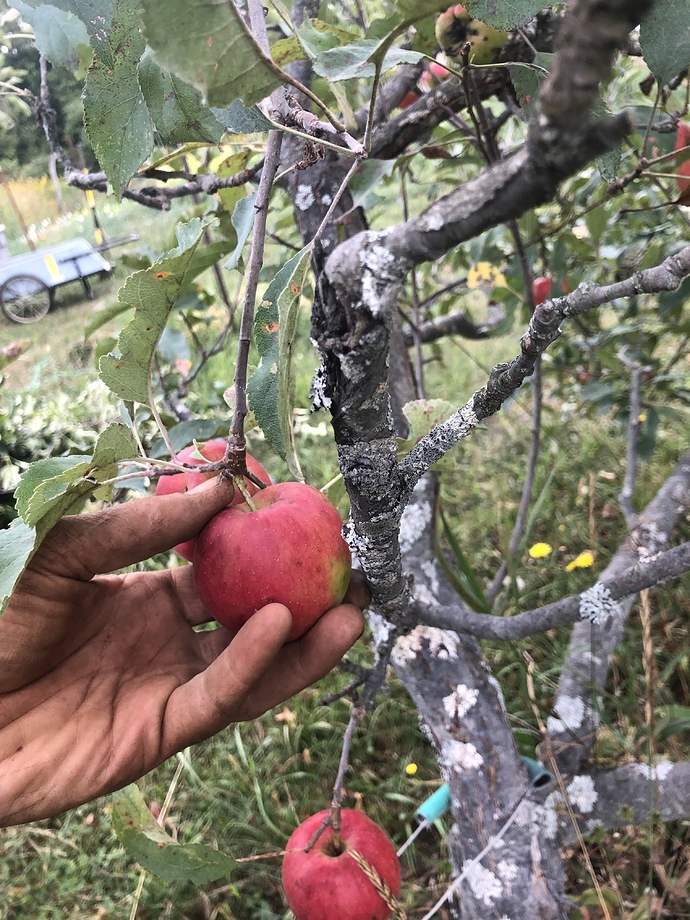 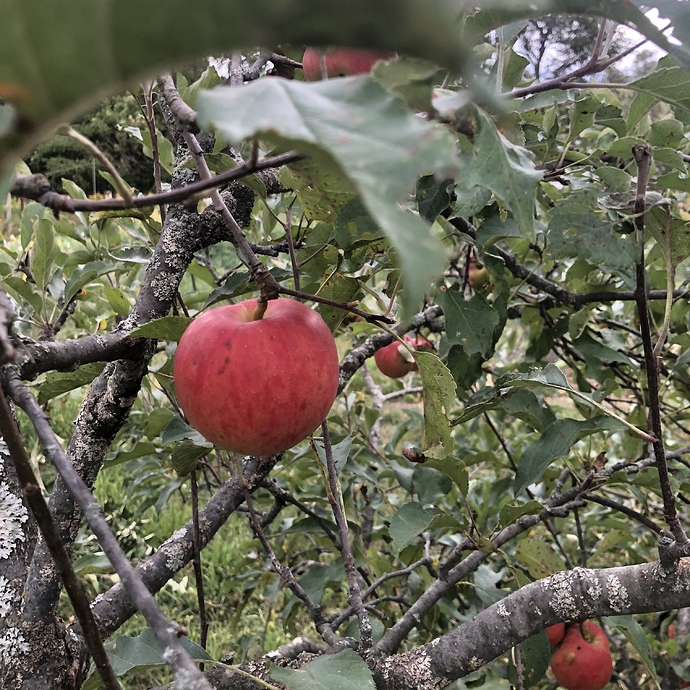 93237752-E78D-4B63-9F05-D38DF9D04A47.jpeg3024×3024 2.99 MB
Today’s pick is Autumn Crisp. Picked Saturday, actually. It was first recognized as a cultivar worth following back in 1968 and labeled NY 674. Introduced by the New York Sate Agricultural Experiment Station in 2009 as Autumn Crisp. We obtained our one Autumn Crisp tree when it was still only a number from Cummins Nursery back in the day when we’d stop by and have long conversations with Steve before selecting trees. When we heard it’s new name, we thought it a bit odd since it is ready to pick, at least in our orchard, a couple of weeks before the first day of fall. But it does stay crisp for quite a few weeks.

Autumn Crisp has a story. Its parentage is Golden Delicious and Monroe. Monroe is a cross of Jonathan and Rome Beauty. Mott’s, maker of apple juice and applesauce, made some inquiries with Cornell for a new variety with key traits of crispness and not turning brown. When NY 674 was offered, Mott’s valued it enough to negotiate with Cornell for exclusive rights to it. Someone at Mott’s had the idea of developing apple slices to compete with potato chips as a new snack food. By sometime before 2009, the deal between Mott’s and Cornell had fallen through. Mott’s moved on to other marketing schemes, and Cornell released the new apple to the general public. I’m sure the “Crisp” was added to the name to help it compete with Honeycrisp – and it shares some of that explosive crunch when fresh off the tree. Under our primitive storage conditions, it loses much of its crunch by early November.

In his book “Apples of Uncommon Character,” Rowan Jacobson writes of Autumn Crisp‘s favorable points: “It’s beautiful, kids love its crispness and gentle flavor, and it takes forever to brown after cutting. If only it didn’t try so hard to please.”

Although it has failed to achieve widespread attention and show up in supermarket bins (its only medium size may be at fault, and this year the fruits are smaller than usual), the apple has done well for us. It has consistently finished high in apple taste tests we have conducted and was the overall winner two years in a row (2016 and 2017) at our largest tasting during an early October cider pressing party.

There were a lot of ashes falling from the fires today. The good thing was the sun was blocked, so the temperature was less than 90F. I picked up the damaged fruits from the heat wave. They were burned, but not too bad.

Ashes on the patio. 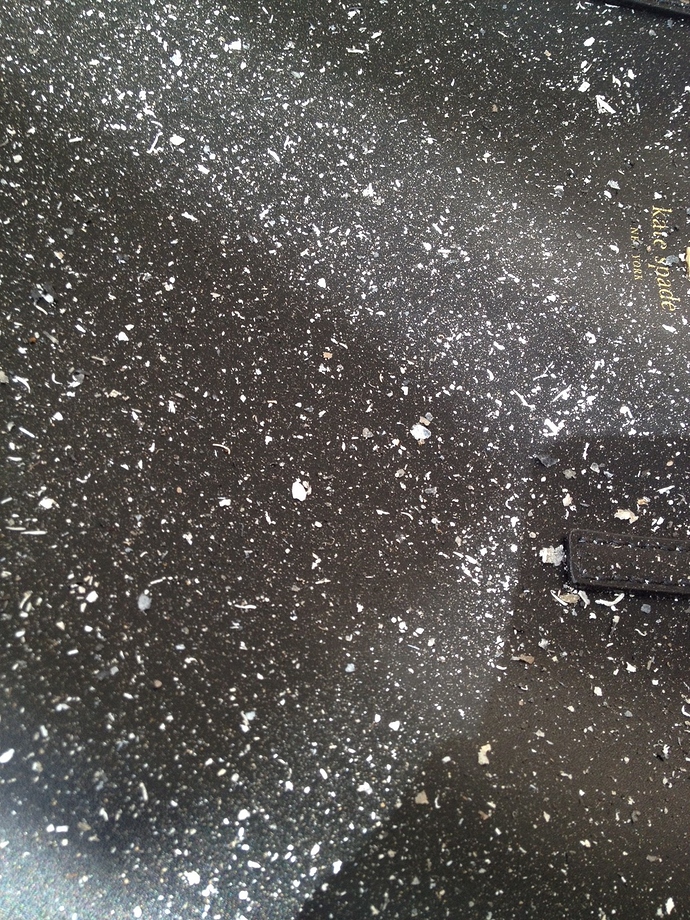 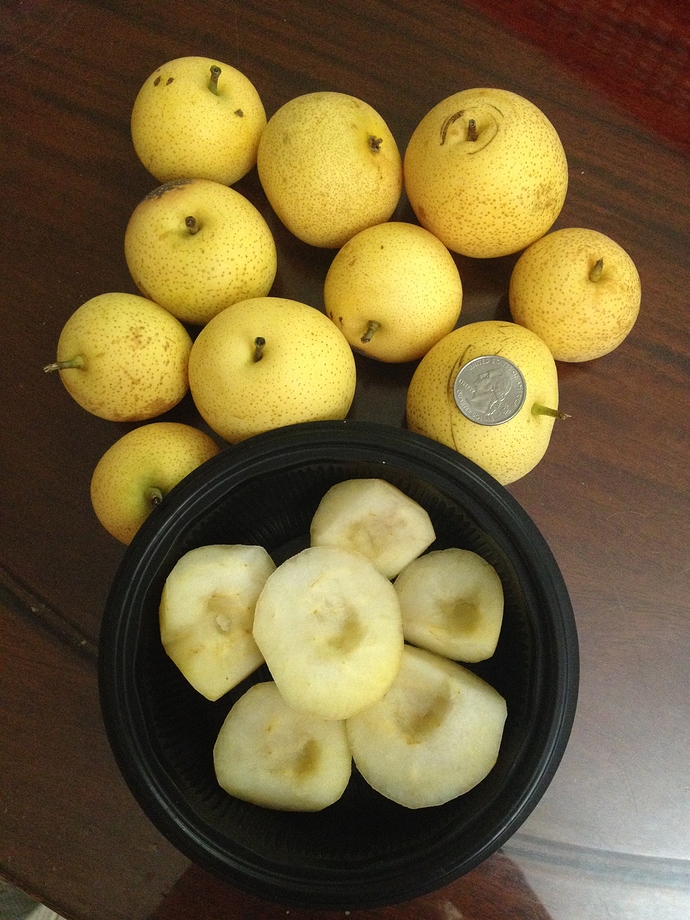 Ghost apples: the majority have the longer shape. A few were round shape, maybe from different pollens. The longer ones are light and crispier. This variety is my favorite apple so far this year. They have thin skin, are not so sweet, and all are good even the very small ones. Best of all, seemed like the codding moths don’t like them, not like Fuji apples. 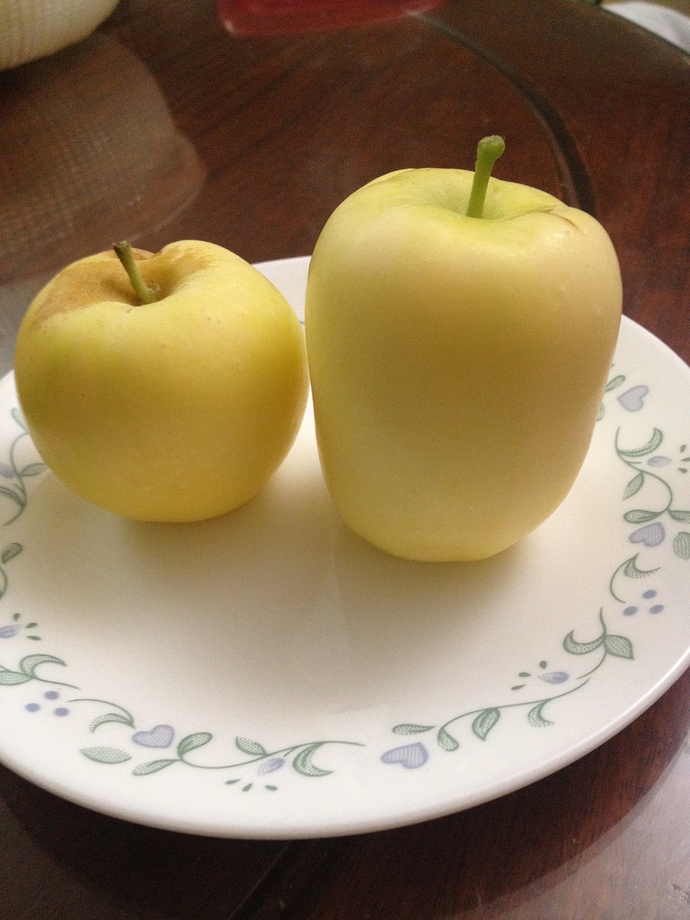 Elephant Heart: at certain angle the name truly describes the shape. They hang on the tree so well, and a lot are still unripe.
Flavor Grenade pluot: we have them in ziploc bags.I don’t know how, but only one is ripen everyday, just what we want.
Mariposa plums: the inside color is so beautiful and the pit is tiny, but the taste is just so so, soft flesh and not so sweet. 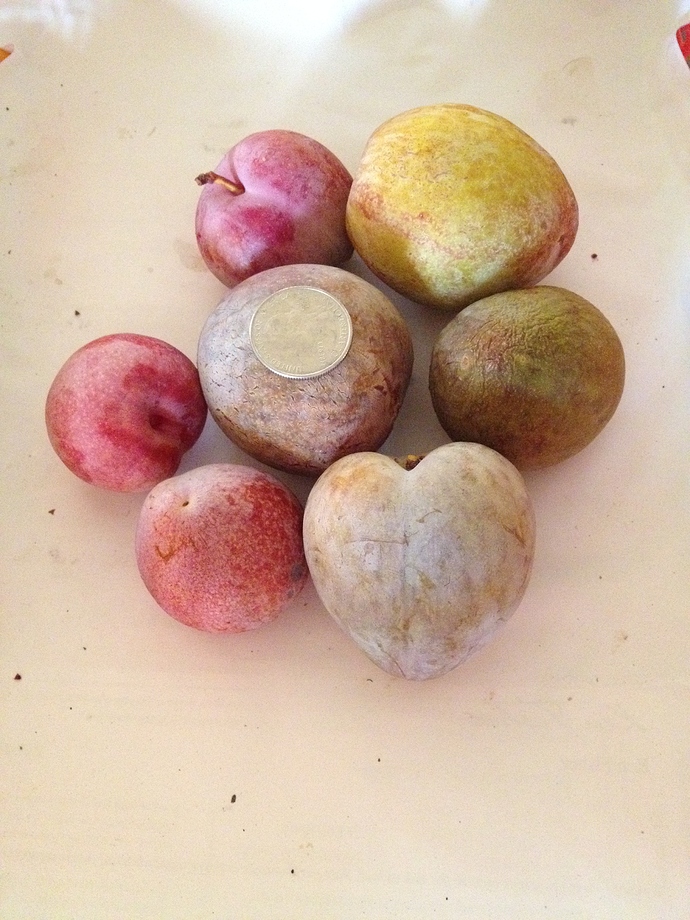 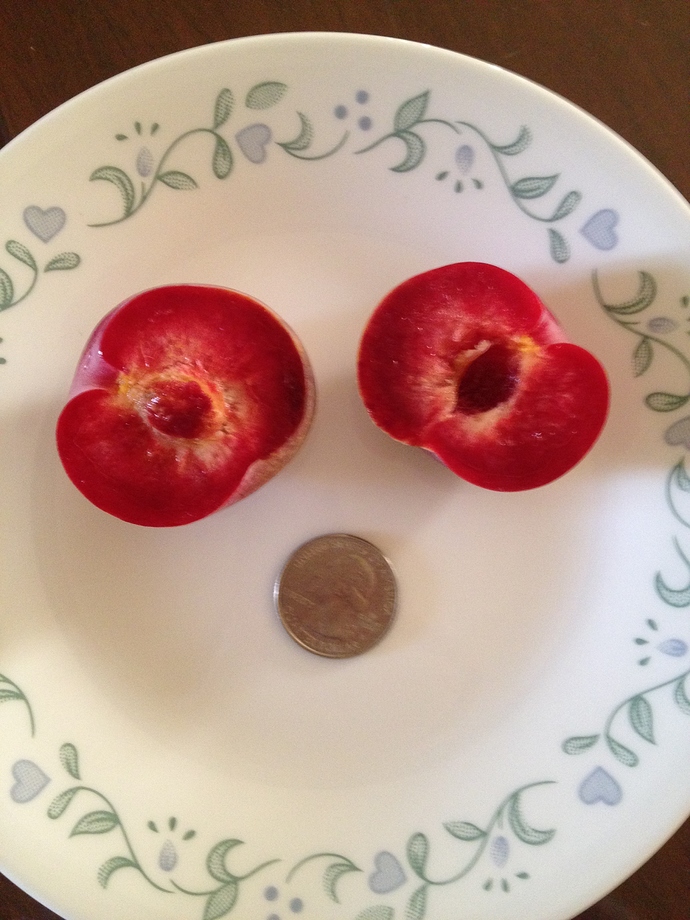 Mixed apples: a lot got burned from the heat, but the taste is fine. 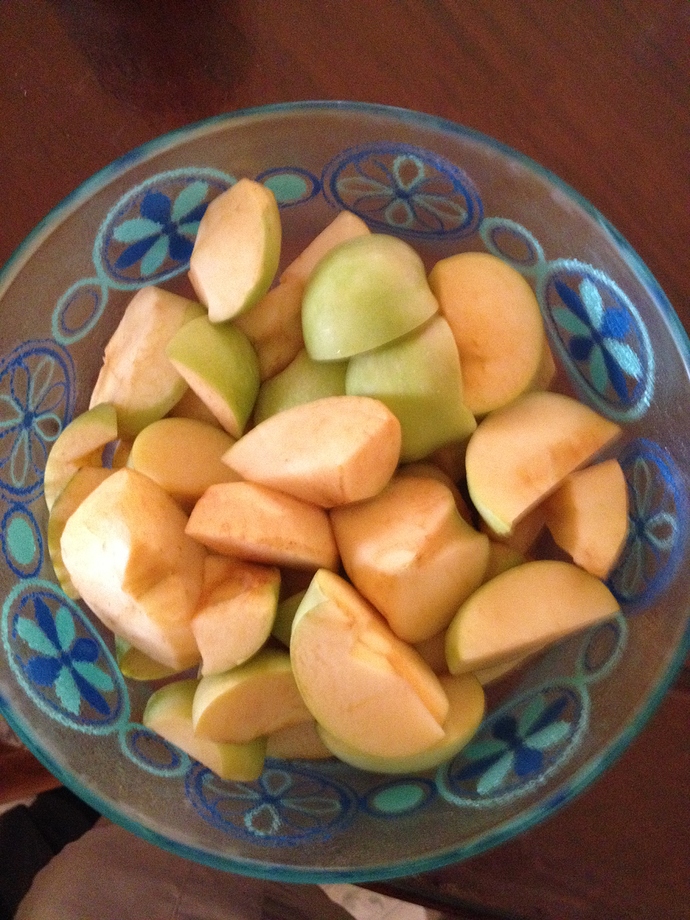 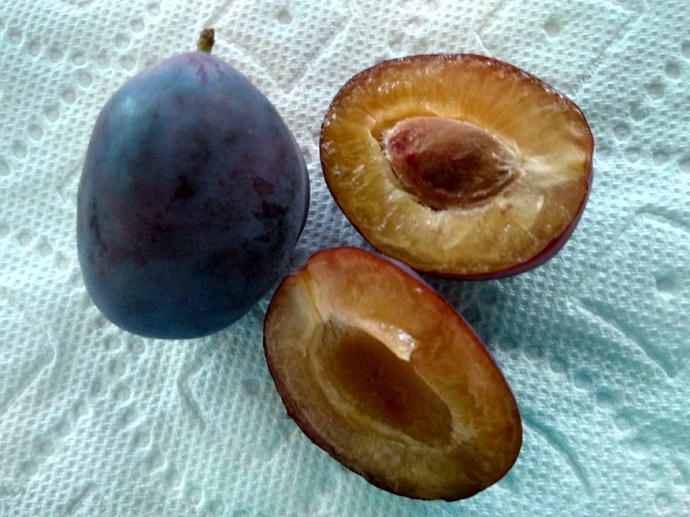 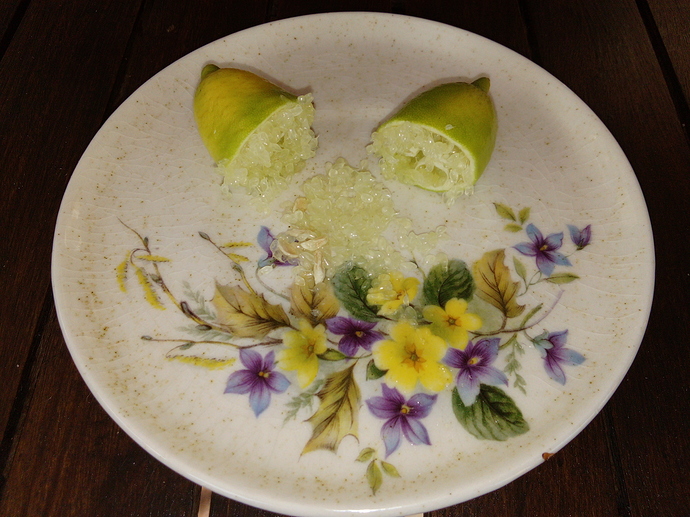 Marilyn Monroe after a rain 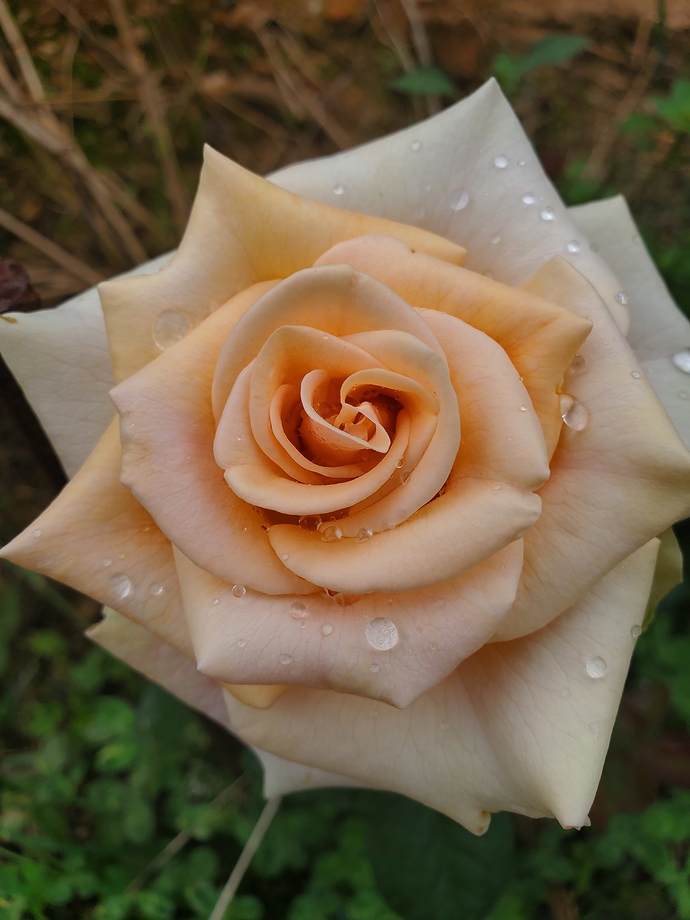 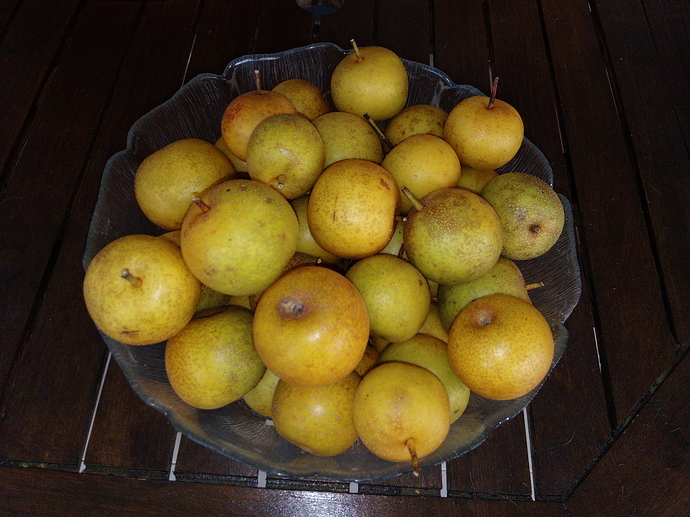 Enjoying some delicious preserved apricots with my morning oats - many thanks to @Stan for generously sharing! 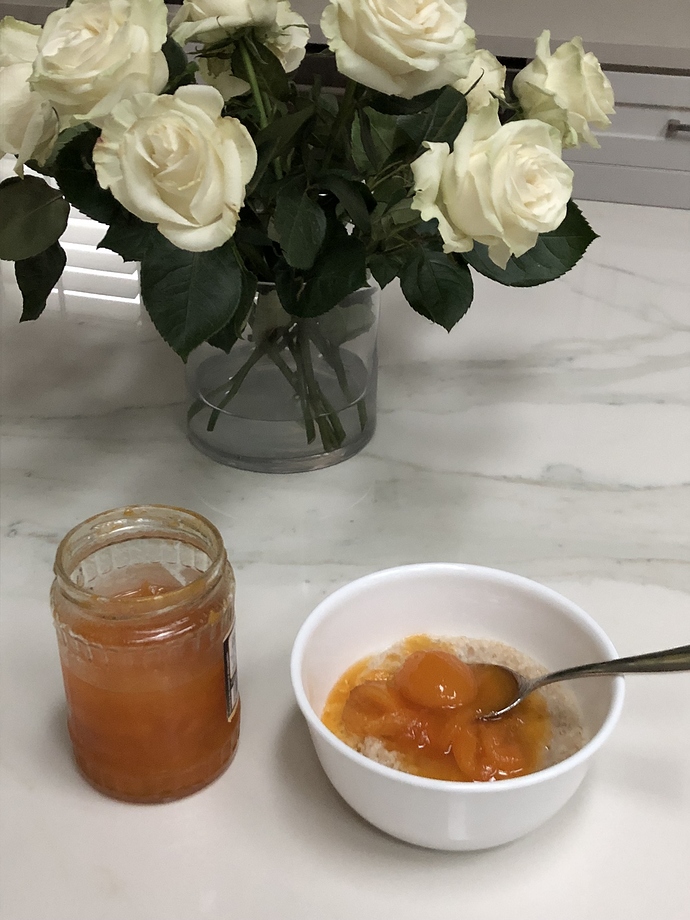 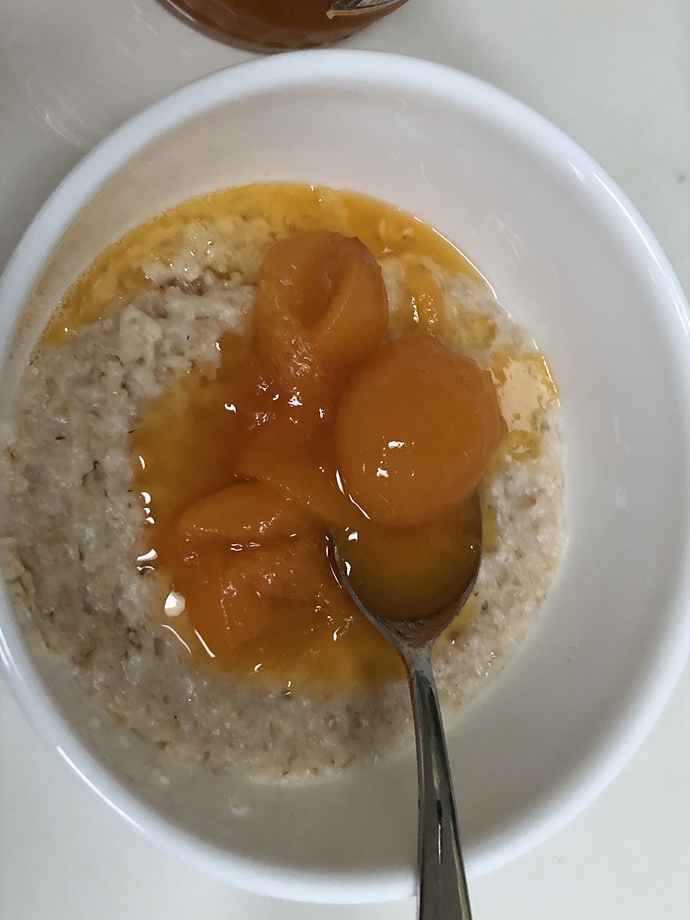 Rio Oso Gem Peach. This is a very good peach with good size (although my crop is very small). Very sweet and delicious, excellent texture and very good flavor. I would put it just a small notch below Red Baron in terms of best peach this year. My wife also agrees with this assessment. This peach does tend to get these brown mark (shown below). This is the only peach I have that does this. Not sure what it is. Doesn’t affect fruit quality, just appearance. 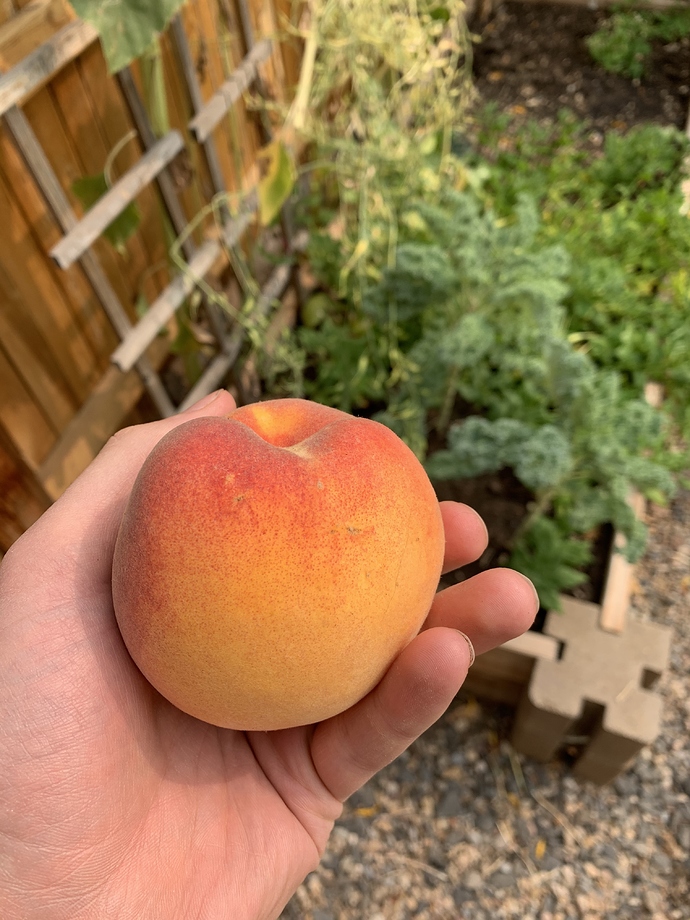 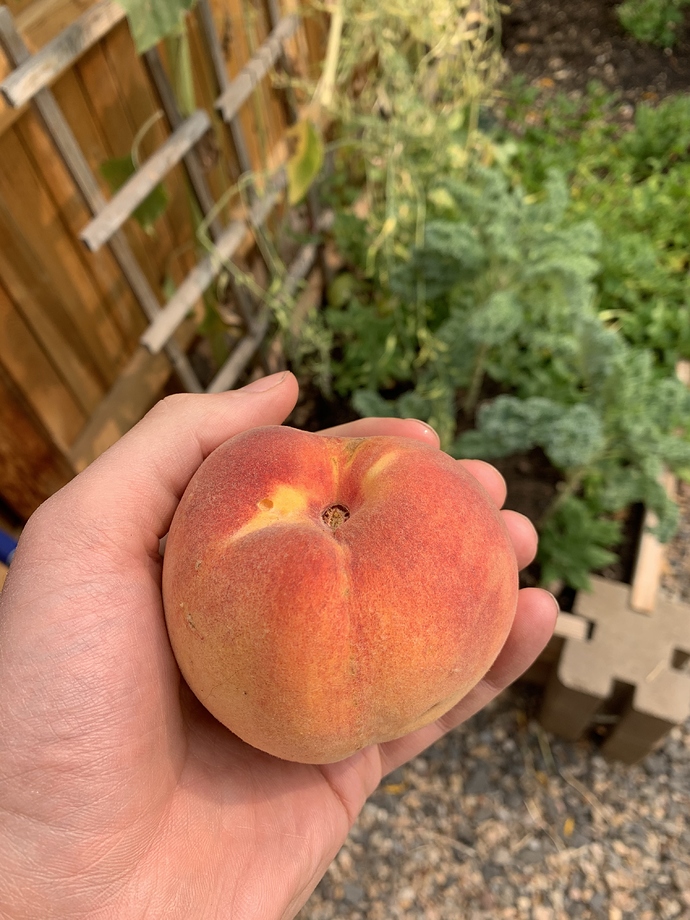 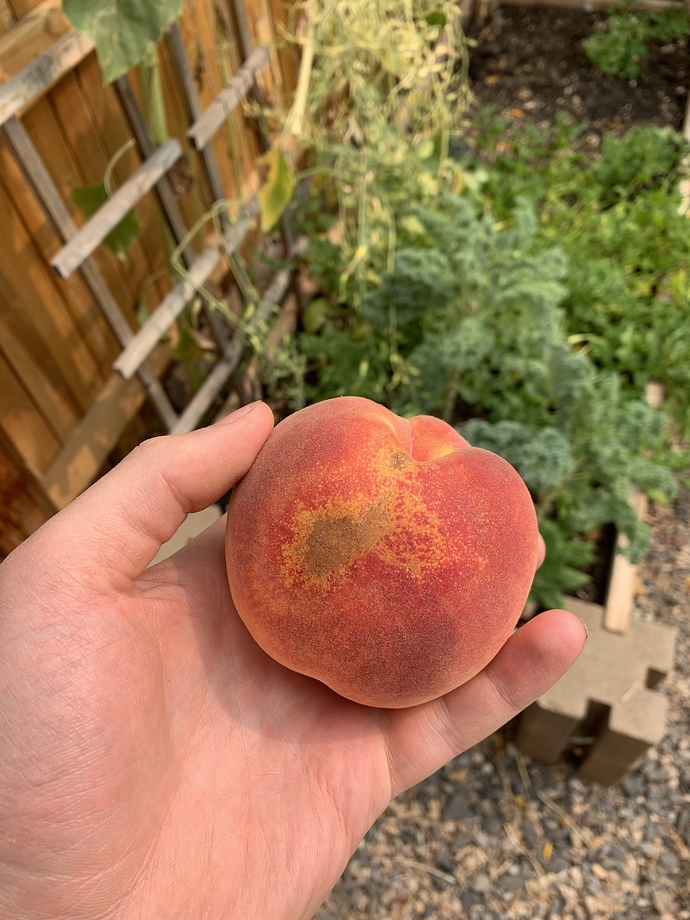 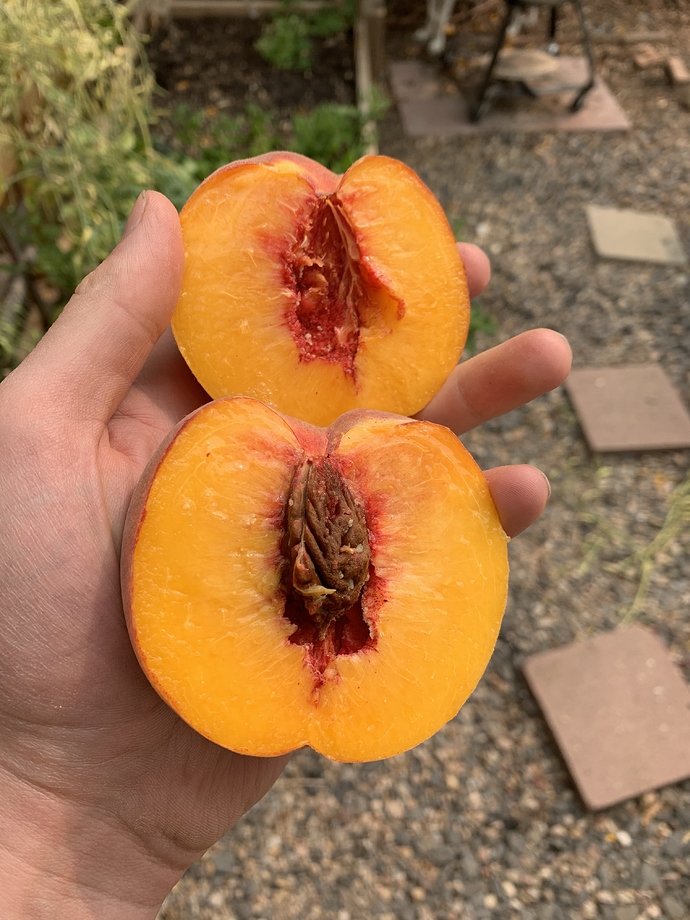 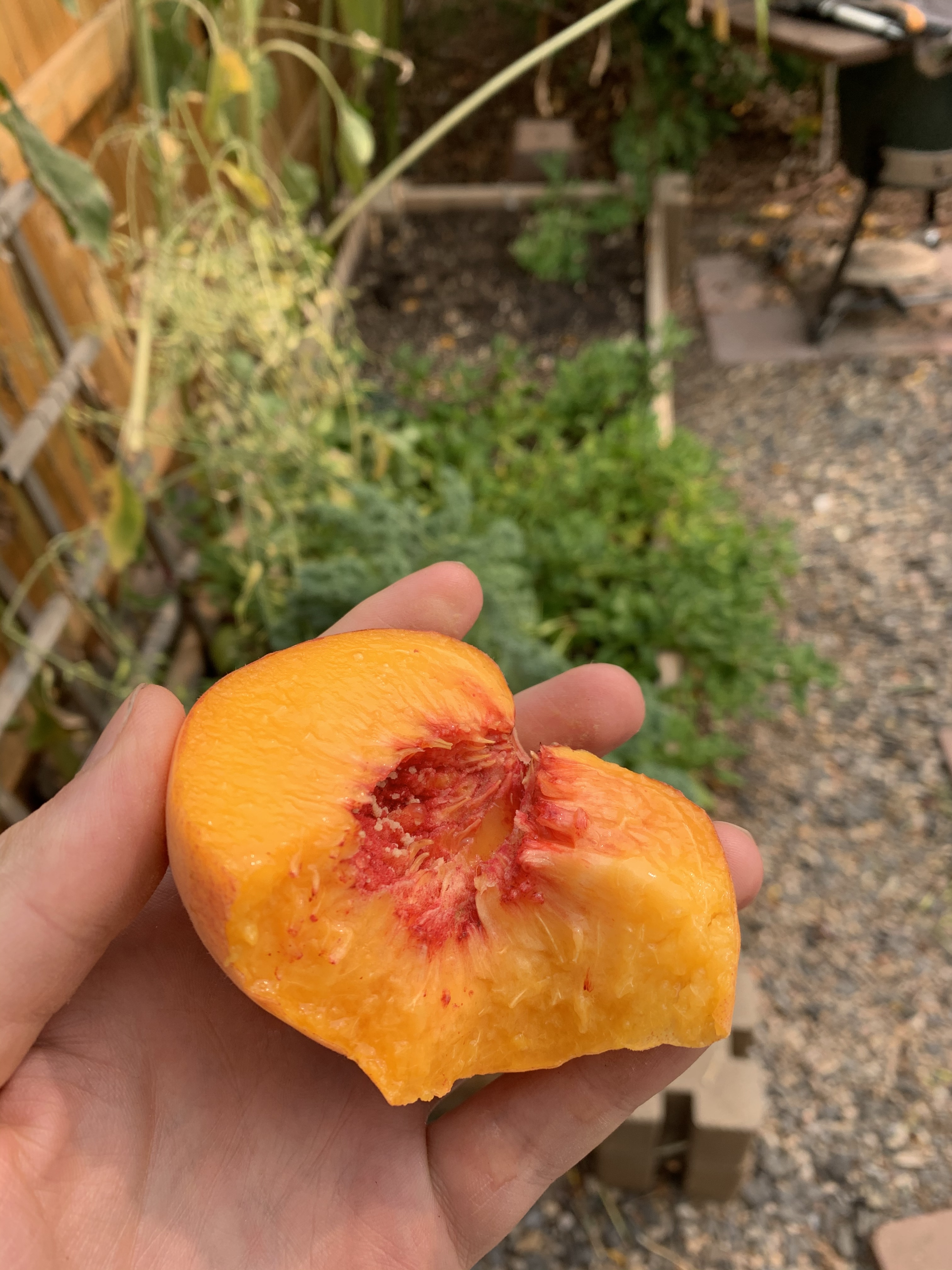 My winged beans are finally starting to come in. I’ve been nibbling on the leaves and shoots a bit as I waited, but I hope now I can get enough for at least a meal a week for the next 6 weeks or so before frost. 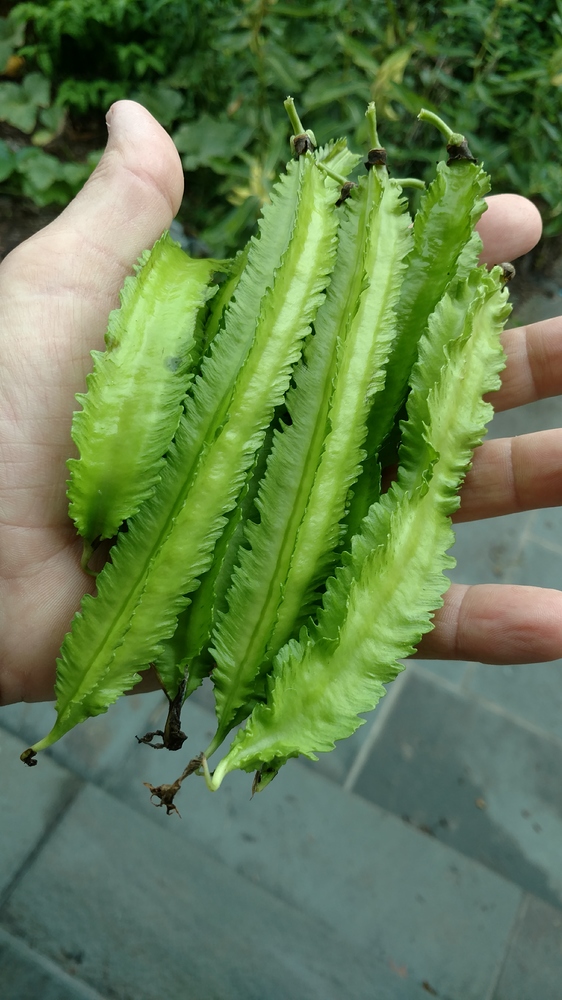 My winged beans are finally producing too. I’ve heard leaves are edible so I tried it once. But my stomach didn’t agree with it. I have a pretty tolerant stomach and I’m not new to Asian veggies so I was surprised to get a tummy ache from what I assumed was from winged bean leaves. Has that been your experience too?

I’ve only been nibbling on a few raw and haven’t had any adverse effects. I didn’t want to slow the beans down. But now that they are producing I may try a bigger batch of greens to cook. Based on your response I’ll make sure to have a smaller portion the first few times and see how it goes.

By the way, about half if my vines are producing, some starting about 2 weeks ago, but many haven’t started to flower yet. Do you notice that with yours? I’m going to save seed from the early flowering ones and see if it helps. Mine came from brown seeds, which I thought was supposed to be day-neutral but I’m wondering if some of them are more effected than others in my batch by day length.

Mine is also day neutral but I definitely think they are sensitive to day light. I’ve had the vines grow great entire summer but they don’t start producing until we are closer to fall and shorter days. Same thing last year. I had my best harvest end of September looking at the pictures from last year. I think most vines eventually catch up and produce the same even though they start out at different stages.

I have never eaten winged bean’s leave. Never know anyone eating leaves. We eat the beans both raw and cooked. I love them raw. They are crunchy.

This was my 2ndyear of Red Baron, both years were a big disappointment. Last year fruit were small, hard and bitter.

This year, the peaches were large (we also had a lot of rain recently). I thought the taste would be better (even if diluted). Not only it tasted rather bland, it has a bitter after taste. I know I got the right variety because of its showy red flowers.

I will give Red Baron one more year to prove itself

Red Baron reminds me a lot of Indian free. It has heavy fuzz and is pretty acidic. So, I can imagine that the fruit would be inedible if the sugars don’t get up there. What rootstock is your tree on? Mine is on citation.