Abandon ship on this apple, and top work?

Have a 25’ wide apple, and the plan was to reduce size, form it to a weep, and graft onto it. I’m now wondering if I should abandon ship on that plan and cut main scaffolds to top work it?

Goal: Shrink the tree size to the point I need no more than a 6’ ladder to maintain it, eliminate original apples, and sustainably graft a dozen varieties of apples on the tree.

Thanks for your thoughts!

What I have learned:

This year, I grafted maybe 30 grafts of 12 interesting varieties, about 8-10’ high. Virtually all grafts took, though I’m not sure if they will last… some are on big diameter wood, and only my 2nd year grafting. Red circles are grafts.

Open vase shape and shading/sun scald is also a concern with reduced size.

Same tree as these threads over a few years:
Pruning Large Apple Tree - Need guidance on Reducing height & thinning
How to train/prune this apple to a weep? 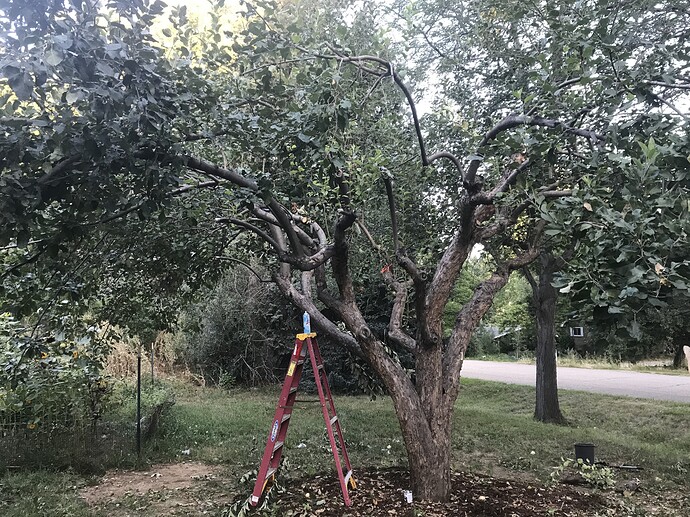 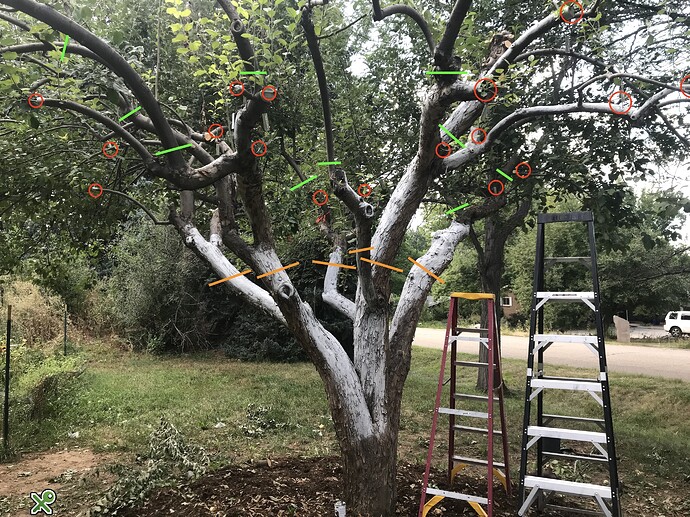 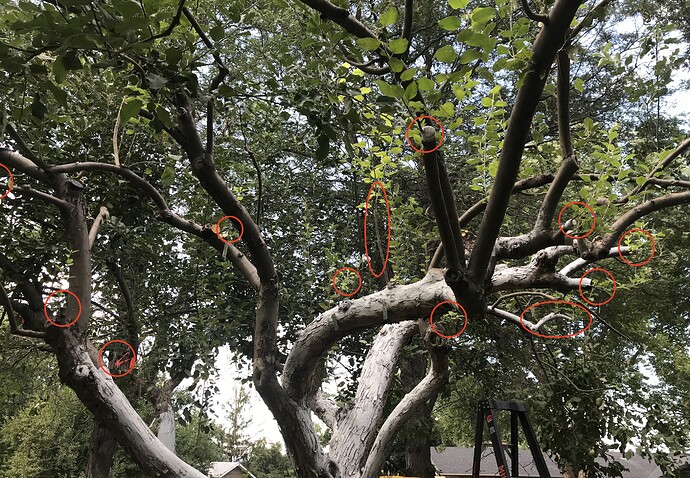 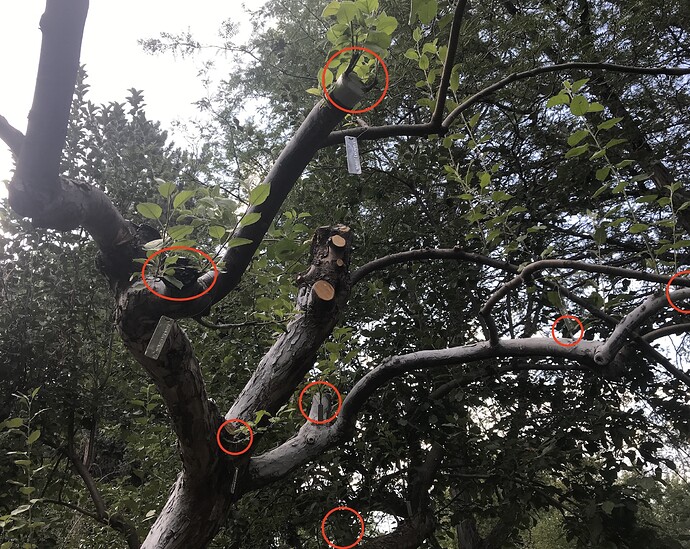 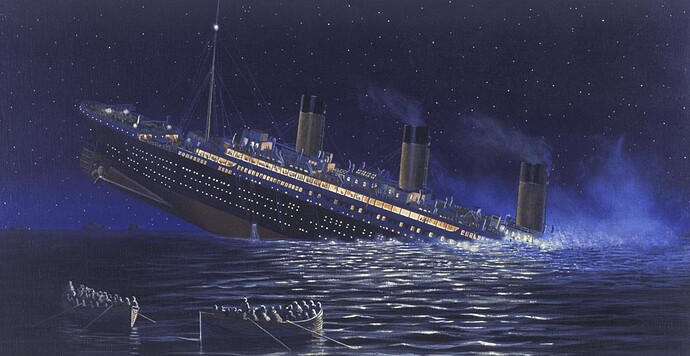 Plan #2. If you want weeping, choose cvs. that spread. I can think of several without researching:
Winekist, Redfield, Shackleford; Catshead & other tip bearers.

You might be better off planting a semi-dwarf and grafting to it if you want to use the 6’ red ladder to prune and harvest the trees. It’s easier to keep a small tree small than it is to reduce the size of a large tree.

Hopefully, @alan will comment on your plan he has a lot of experience managing large trees.

I’ve reconstructed trees 50’ tall with over a 70’ spread. If the tree is vigorous you can turn it into any form you want, but for a low spreading trees you need to graft onto watersprouts under 10’ above the ground and if you maintain branches above that, even temporarily, you have to make sure that lots of sun reaches developing grafts.

I tend to take a more patient approach than you seen to be doing, but you probably won’t kill it. I just like to keep most of the rootsystem thriving, and there needs to be a reasonable amount of functioning canopy to do that.

Agree with Alan, I would tend to start with limbs on the side of the tree most exposed to sun so that your higher nurse limbs do not shade. Would do it over a 2-3 year period, so that you have success on first grafts before cutting off your last nurse limb to graft. This large tree could easily support 9-10 varieties
So it would be easy to get good baking, eating and well storing ones
I am doing the same with several large mature trees
Good luck
Dennis
Kent wa

Alan was so good to give guidance in the prior threads last year, and I was trying to go there, but had the following issues:

While I’ve been working the tree a couple years, every year it is 90% back to where it was before, so I decided to make some more drastic summer pruning to see if that would help, plus give the new grafts more light (pretty shaded before). I’m sure the roots will suffer, but less so than chopping and grafting all the main scaffolds, hopefully.

The lowest I could graft was round 8’ (to 10’)… the scaffolds are pretty high, where water sprouts are forming. About 1/3 of the grafts are on water sprouts, though most were just too high (like 11-14’). I’ll continue to graft to lower water sprouts as they appear, as that sounds ideal from a strength perspective. Maybe T-budding would be a good option for me, out the side of the scaffolds (given how high they are).

I’ll continue with option 1 (aggressively) over the next year or so and see where it goes.

Since the tree is basically open vase shape, I’m concerned about sun scald when not dormant. Would you all grow some sprouts towards the center, or do something else, knowing the high canopy is being removed to reduce the height of the tree?

Open to all ideas, and will probably plant another apple semi-dwarf, but want to use this one to the extent possible, while minimizing native growth.

I have seen where water sprouts are allowed to grow on horizontal limbs to prevent sun scald. What was recommended was to keep the water sprouts pruned short to prevent them from becoming dominant but still allow them to provide shade for the large limbs. It seems like a reasonable option to me. You could allow some sprouts to grow in the center and keep them short.

I seem to avoid scald by doing renovations throughout the growing season and then doing my big chain saw cuts in late winter. The sun is much weaker now than two months ago, whatever the heat is and fully leafed out trees draw sap through them helping the cambium stay cool enough not to kill cells. If wood is removed while trees are still growing and storing energy, more of that energy will go to existing buds so they can sprout out with vigor the following spring when I believe most bark scald occurs.

That said, cambium kill on upper wood that will eventually be removed doesn’t really matter. 30 years and hundreds of trees later I don’t believe I’ve ever killed one by taking off too much wood. Of course, trees can die slowly and we don’t always get to know the specific cause, but trees I’ve drastically reduced in height continue to flourish decades later.

You only need to take out a lot of smaller wood up high at first to let enough light into the tree to create lower graft-worthy growth in a vigorous tree. Mop out the sprouts up there during spring and again in mid-July to early Aug.