Discovered an old orchard on a local abandoned lot. Can anyone tell me the variety? I believe either Wealthy or Gravenstein, but I have a hard time telling the difference. The fruit was tart with some sweetness underneath. 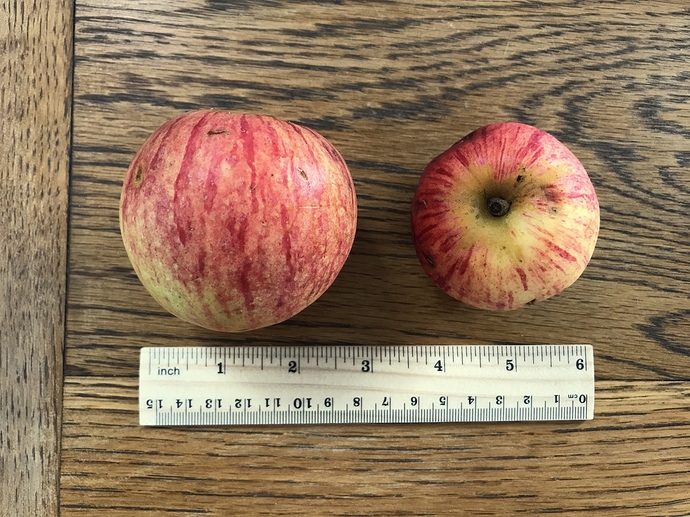 You already asked that - ?

Recently found a very old apple tree on an abandoned homestead in Central Washington. Does anyone recognize the variety? [image]

If you want to add something you can just follow up on the old thread, no need to start a new one…

These are different trees from a different orchard in another part of the state.

Ahh. It looks similar to that other apple variety.

What does the seeds look like might even be a king apple. King would be another month here as well as wealthy. I’d say Gravensteins tart with some sweetness. Gravenstein is about another week away here in willamette valley. Mine are getting close

Grave. Also gets mushy very quickly, even in fridge. It is fairly true to seed for an apple because it has sex with itself. It can’t help it- finds its own pollen irresistible. .

That confuses me, Alan. I’d understood Gravenstein to be triploid and pollen-sterile. Here in Grav Country - Sebastopol is just north of me - the common practice to is to plant a good pollinizer (Golden Delicious, Winter Banana, etc.) to support it.

Now I’m confused. I was quoting “information” I’d gathered long ago from NAFEX’s Pomona magazine. It was an explanation of why so many wild apples in the west had many of the features of a Gravenstein.

I don’t know anything of the fine points of genetics- I know triploids can’t pollinate diploids but can they pollinate themselves? you suggest they can’t. If they are pollinated by a diploid to they grow viable seeds? Maybe those seeds tend to create trees much closer to parent than diploid to diploid pollination.

I don’t know enough about apple genetics to be sure, either. My understanding is that triploids usually can’t pollinate anything, including themselves. Same goes for tetraploids.

I know nothing about the characteristics of the seed of a triploid pollinated by a diploid. Perhaps someone less clueless than myself about this can weigh in.

Anyway, no matter how long I study this stuff I’m still as stumped as ever. Some things are difficult to find in the literature even with a long search.

Do triploids have viable seeds that bear fruit that more closely resemble the triploid parent than diploid offspring resemble either parent?