Anyone tried the Aerogarden Ultra? 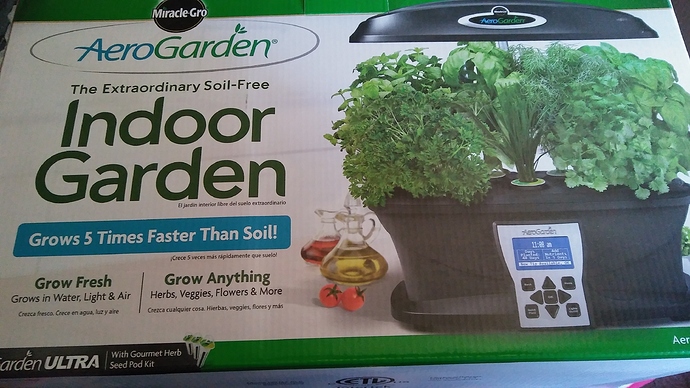 What would you use it for?

I have one given to me as a gift. There’s an unbelievably complete review on Amazon as their most helpful review. Got 13 cherry tomatoes off it about a week ago. Almost a novelty, but it’s been producing since February.

For about $90 you can get a Mars 300w equivalent lamp a $16 bag of General Hydroponics Maxigrow a $16 total dissolved solids meter and build a better ( but more unsightly) setup.

Oddly, it was the assortment of doo-dads from the hardware store that drove the cost up.

The hydro is not particularly difficult these days, but I do find it difficult to mentally change gears from soil growing.

I looked that up on Amazon, read the specs, and read the same review koko mentioned. Now I’m trying to think of something nice to say after almost choking on my tea when I saw the $222.89 price.

If someone who had mad money with nothing better to spend it on were to give me one, I’d accept it and find somewhere out of the way to plug it in. If it had a price tag of around $40 and were marketed as an educational toy, it would be something I might buy for a grandkid.

The problem is that I’m an adult. I do grow things. I don’t have a brown thumb unless it’s covered in dirt. After a lifetime of serious thriftiness and saving for the future, the future is here, but I’m still averse to getting less than fair value for my dollar. The price tag on that is far higher than what I perceive as its value.

Unlike you Muddy, I have been accused of being somewhat a spendthrift, but at over 17.00 a cherry tomato, I’ll pass…

What matters is that it makes YOU happy, not me. If it’s something you enjoy and gives you what you consider a worthwhile value for your time and money, then it was an appropriate purchase. I really do hope you have fun with it, since it’s something you must have wanted to try.

The new owners, Scott’s, haven’t done much to develop the product and manage the brand and the much more fragmented home dope-growing industry is catching up with them on the simplification front.

I will plant the Herb seed pods that comes with. During the second season, I will plant tomatoes and Peppers.

It doesn’t seem large enough to grow a tomato plant

I love growing home-grown vegetables, but the water bills are way too high. Even if the water bill wasn’t to expensive, I don’t have the time to water and maintain the plants. That’s why I decided to get an Aerogarden.

The vines on most cherry tomatoes get too big for that. You might try looking for dwarf or patio tomato seeds. You’ve got some restrictions with just a 30 watt LED grow light, the amount of root area available, and a max height that you can adjust the light to.

The biggest plants I grow, well tomato plants are the cherries. Massive sprawling giant monsters.
I have seeds to a few dwarf plants, still even these grow to 4 feet, or can.

If I had one, I’d probably plant dwarf lettuces

There are also trailing tomatoes like Tumbling Tom. The tomatoes are larger than cherry toms. I’ve grown that one in baskets before. It only grows to ‘trail’ about 2 ft and produces okay. Seeds are available from many suppliers in red and yellow variations.

What’s the best cherry tomato that you grow?

What’s the best cherry tomato that you grow?

Sungold (unique taste), Sweet Million (very sweet), or Jasper (good balance of acid and sugar). Many good ones out there.