I am curious if Al Horn’s White is better adapted to different climate or soil conditions than some other varieties. Have you completed a pH test for your soil? What soil type do you have? I assume in Florida you get fairly regular rainfall?

Nice spreadsheet Ryan!
You have a very nice collection. What will you do with so much fruit?
Dennis

Thanks Dennis! My list isn’t entirely up to date but I’m working on it. I’m hoping to feed the whole family haha. It would be nice to do the nursery thing on the side when the time comes, but I’m fully aware that turns into a full time commitment depending on how things go.

Thanks for sharing, I will definitely update! I cant wait to taste. Wasnt coconutty?

My soil is like beach sand almost. Years of constant tilling,plowing and planting. The PH is almost neutral. I constantly pile mulch,compost,tea bags , coffee grounds ,banana peels! The soil around my trees is completely opposite of the rest of my yard. We also get almost non stop rainfall from april to now and then the hurricanes and tropical storms until November.

The one I had was very over ripe, the skin was almost completely black and quite mushy. I generally never eat pawpaw at this stage. It had been mailed to me. At this stage I did not detect any coconut but it was unique and had hints of muscadine grape. I imagine it may taste quite a bit different when just ripe.

I would think it would be a lack of winter cold which pawpaw needs.

Derek, I think the questions become “How cold is cold enough” as well as “Do some varieties need less cold than others to go through necessary dormancy”.

Obviously some varieties are not recommended to be grown in the far north as they ripen too late most years. I would imagine some genetics provide less chill hours needed, just like some apples can be coaxed to grow and fruit in the tropics where other varieties would fail. On that same thought process, I imagine an artificial dormancy may be possible by stripping leaves as @applenut has learned in his efforts. Pawpaws as I know you are well aware are a different beast in many ways compared to other fruit trees so it might not be worth the effort.

@Persimmon1 @disc4tw @TrilobaTracker @BlueBerry @mamuang
Most likely Asimina triloba doesn’t need cold for survival, nor is Florida too hot either.
When Bill Whitman former President of Florida Rare Fruit Growers attempted to grow Asimina triloba:
Northwoods Nursery’s 2 year old greenhouse pawpaws, grown 20 degrees warmer minimum winter temperature than Miami, arrived in “Excellent Condition” & lived an additional 18 months before death in summer.
All of Bill Whitman’s trees died during summer.
However, evidence of death during heat is not conclusively evidence of death solely because of heat.
Tucson is 20 degrees hotter than Bal Harbor, yet Ken Stockton’s pawpaw got 3ft of beautiful growth in 6 months on 8 different cultivar grafts on a single seedling, thriving at 20 degrees hotter than Whitman’s claims of death via heat.
Miami water is high in Calcium Carbonate, Magnesium Chloride & Sodium Chloride.
Ammonium Sulfate, Ammonium Phosphate, Ammonium Nitrate all ion exchange with Calcium Carbonate, releasing Ammonium Carbonate 10.4pH.
This most likely burns roots & results in Calcium being even more water soluble when it was already too concentrated.
The soil could possibly even end up nitrogen deficient even though nitrogen was added.
Not enough vetted scientific research has been done.
Tucson often has day time highs in the 80s during winter, yet the trees thrive.
One thing however is clear, Whitman’s deductions where false positive! 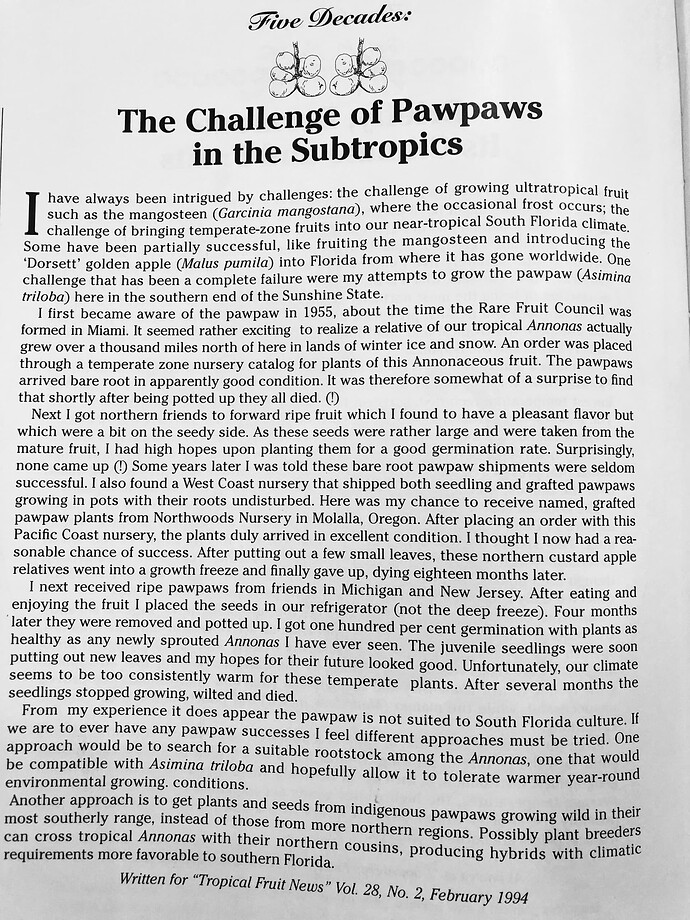 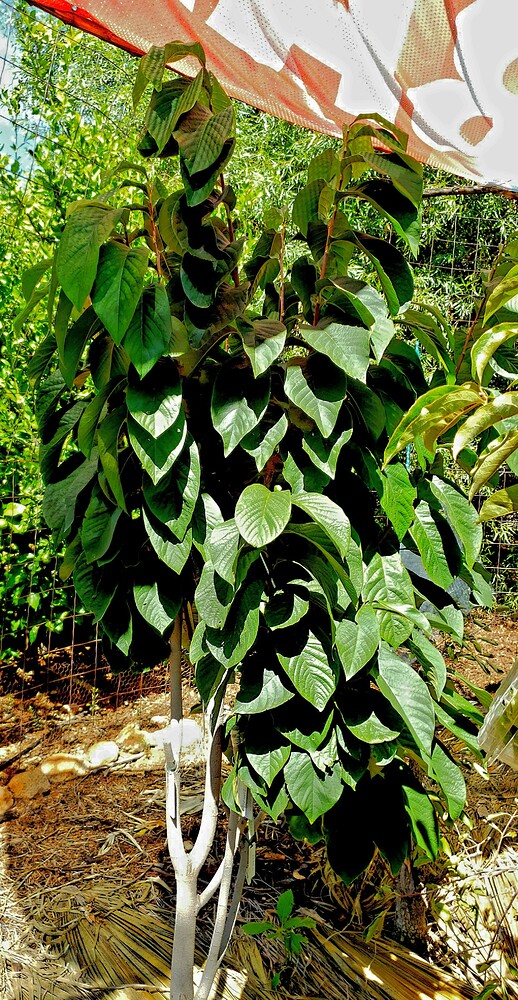 Some years they get practically no rain from November to late May. (Hence the sink holes in Florida from pumping water from underground.)

Not necessarily. Many exceptions. There is plenty of Calcium near Ocala.
And sour soils in swamps along US 17 in south central Florida.

Has anyone tested pawpaws in all the different soil types of Florida?

All of the other species of pawpaws are in Florida, so they are probably a good indicator.

If 2 Vitis vinifera which have the same parent & one love the cold & the other the heat, one be Sulfur sensitive & the other Sulfur resident, then similar variations can happen in other species like Asimina.