Nope their indication of spring flowering lets people know they may dig for people deceased thru winter. I’m surprised you didn’t know that, actually.

I was raised in Ariz and CA where shadblow doesn’t exist- as far as I know. I’m not sure how widely this cultural understanding is held- no teacher mentioned it when I was studying hort at the NY Botanical Gardens. Certainly Dirr makes no mention of it in his descriptions of Amelanchier in “the green Bible”. .

Alan I don’t know if it is fact or legend…(although many legends have at least a core of truth, despite embellishments over time)…they were simply serviceberry or ‘sarvis’ in Appalachia. But, sometime along the course of time I picked up ‘Amelanchier’. Knew all the trees and bushes didn’t look the same, but didn’t really know until perhaps reading Dirr’s 90’s edition of woody landscape plants just how many different serviceberries there are.

Supposedly there’s one in McCreary County KY in the Daniel Boone National forest that is 28 inches in trunk diameter.

I personally have a neighbor that has one I discovered 73 feet tall and 43 inch circumference. Also I discovered one in Allegheney County North Carolina a couple decades ago I calculated at 72 feet tall. Not for certain the species, or hybrid.

It’s an amazing tree and it’d be nice to see more breeding of the species for fruit, not just for big blossoms for ornamental value.

There is an Asian and a European species. At least 4 of the species can be found natively in Kentucky, plus a. alnifolia has been introduced, as have many hybrids.

No fruit beats an apple serviceberry in my opinion.

What is an apple serviceberry? I have tasted the fruit from several different cultivars and enjoyed the fruit but I can’t say it is a favorite. I tried growing the Canadian plains cultivars which were supposed to have superior flavor and I tasted a few fruit before they died. They didn’t like my climate, apparently and never grew with vigor- leaf diseases.

Yes, the a. alnifolia from the Northern Plains into Canada do not do very good here, either. Mildew, etc.

Apple serviceberries are Amelanchier x Grandiflora (In other words a hybrid).
In this case a hybrid crossing of amelanchier Arborea and Amelanchier Lavies.
Most of the seedlings make nice fruits, but the most commonly known selection for landscape use is a cultivar called “Autumn Brilliance”. I like “Princess Diana” better as a specimen landscape plant.

Maybe this could go to a serviceberry thread
if there is one.

It’s probably good that somebody has apparently already spoken for those pruners, because I wouldn’t have been able to pass up that bargain, even though I already have 4 pair.

Can you ever have enough pairs of great pruners?

I agree that the species is a prime candidate for selective breeding. It is a shopping mall tree, which means it’s tough as nails. I have natives and Autumn Brilliance growing on my land. Years ago I purchased some very large bare root trees from a nursery in the Midwest and they plugged in without staggering. I think they were close to 1.5" in diameter.

They are exceptionally beautiful and early to bloom- so of course, no fruit this year. I’ve heard of organic growers using them as a trap tree to spray with synthetic insecticides in order to kill off PC before other fruit becomes attractive.

On my property I never beat the birds to the fruit. On the clients property where I planted most of those big bare roots he had so many of them that there was plenty of fruit for everyone. I could gather bowls full.

Me too. I have been using a Felco (#6 I think - for smaller grip).
Then I ordered a 4" ARS Long Reach Pruner. It was a bit difficult to find - and it came from Gemplers. I liked it so much that I ordered the ARS hand pruner. I find it to be superior to Felco.

The ARS LR pruner was discussed earlier in this thread -
I’d like to add . . . The Long Reach pruner is my favorite orchard tool. Keeps me off ladders for almost every pruning/thinning job I have. Also keeps me from having to repeatedly bend over . . . as I use it to reach into bushes (and Pomegranate tree bases!) instead of crawling under them!
It will easily and cleanly cut up to ¾" branches. I chose the stationery one instead of the telescoping one - for the diameter of the cut - and for strength. I go with ‘simpler is better’ most times . . . less parts to fail. The one I have does rotate, though . . . and I have appreciated this feature. This makes it easy to get at a branch from exactly the right angle and direction.
I can’t recommend this tool enough!

I don’t buy anything ‘Fiskers’ anymore . . . I find their products to be very inferior and I end up spending MORE - even though they are priced at LESS than ARS . . . simply because they don’t last.

I have the telescoping long reach:

I mostly got it for collecting scion wood.

Both look like great long race pruners. I need to get one of those. No need to get on top of a ladder if you do not need to. I usually go out to my orchard by myself anyway. So getting up in the tree off a ladder is a no-no when by yourself. These long reach pruners would be the answer to address that issue.
TY both for posting these pruners.

Looks like mine is the old model, the new model on Amazon is expensive.

I think its this. Don’t know anything about the site, but the price seems more reasonable: 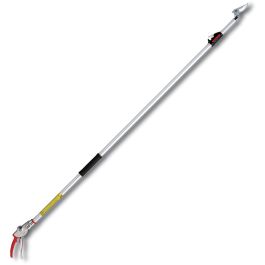 TY for posting the updated version.

When my ARS long reach pruner arrived, I was so excited that I practically ran around the yard looking for opportunities. Some honeysuckle that grew up inside an incredibly tall yew. Tall forsythia shoots on the side of the house. Rose stems on my climbing rose that had shot up to about 10 feet along and up the arbor. And of course, five extra feet of growth (no kidding) on my Moonglow pear.

What a blessing to have this tool!! Absolutely worth it.

Mike, depending on what you think you’ll use the Long Reach Pruner for . . .
compare the diameters of the cuts that each model can make.
I wanted to be able to take out entire large branches, close to the trunks of apples.
@Rosdonald mentioned taking out long runs of growth on her Moonglow . . . and the stationary models are very capable of this. I’m not too great with a saw - especially when perched on a ladder - and from the ground you can do so much with these pruners!
Also - some models’ descriptions say that they grab the branch after cutting it. Well - that may be true . . . but I can do that easily with the stationery model - using it like a pincer.

I have found that there is nothing like the Japanese blades that these ARS tools have. We were so impressed with the quality of these ARS tools. I bought my husband his own hand clipper for a birthday present!

Now my lingering question is - WHY CAN’T AMERICANS MAKE A TOOL OF THIS QUALITY???

WHY CAN’T AMERICANS MAKE A TOOL OF THIS QUALITY

Because they do mass market and most American gardeners are looking for a $15 pair of hand pruners so that’s where the most money is made. Same deal with long reach pruners. Of course the actual manufacturing goes wherever on the globe labor is cheapest when adding the cost of transport and delivery.

Heavy, relatively cheap tools like shovels are made of both crap and excellent quality right here in the U.S.

Little giant makes great step ladders in the U.S. albeit with a German design (U.S. design genius is mostly devoted to global entertainment including through the internet as far as what we see on a daily basis).

I seldom use my ARS long reach pruners because I’m much quicker and more accurate when my hands are near the cut while standing on one of these ladders. I’m 70 years old and when my balance goes so does my professional life.

“Free trade” is the reason not much is made in America…

been working exceptionally well these past couple years…gov’t prints money, hands it out, and the Asians keep sending stuff here that we don’t put an import tax on…

…been happening on such a grand scale that they can’t unload all the boats at the docks.

TY for the great information and insight as to what to look for when I buy one. I agree with you, why can’t American’s make a quality tool like this?