Last year by June, I pulled out 4 dead trees. That’s a big part of my little orchard. It looks like we are starting again. Last year I was sure it was ambrosia beetle attacks since trees leafed out and then died with tiny holes in the trunk. This one is too early for beetle attacks. Any guesses as to how it died? Or if it’s dead. I know I will know for sure by next week but I want to order replacement tree and find scion wood before everything everywhere is out of dormancy. I don’t want to wait until next year to replace, that would mean no fruit next year either. I know Mamuang would say peach trees grow fast, plant another in raised bed and move on. So I’m taking that advice ahead of time.

but I’d still like to know what killed this so I can break this pattern.
This would’ve been the tree’s third year from seed. I grafted last year and it grew like crazy.
Here are few pics.
These twigs and buds look dried up. 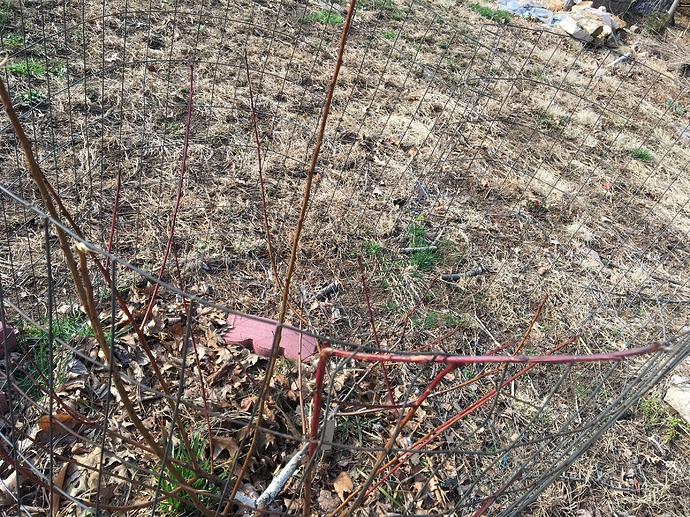 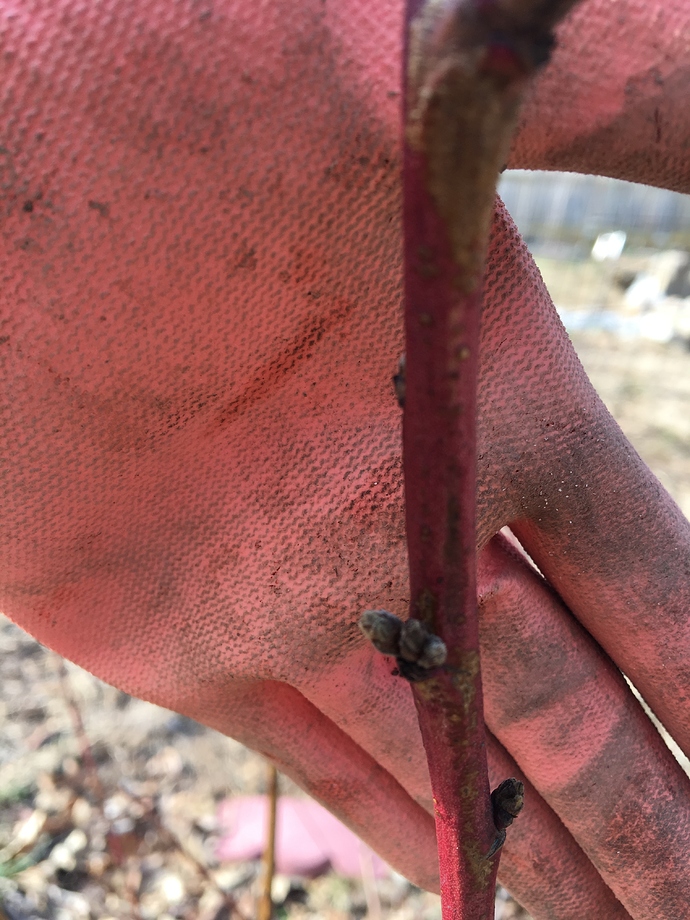 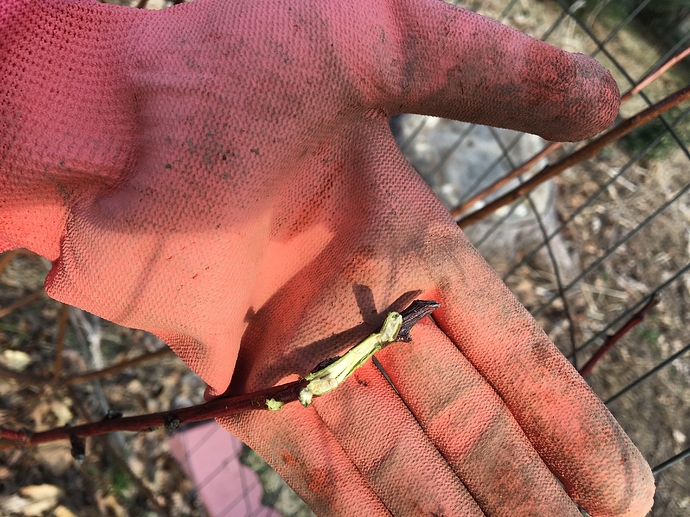 This is the stage my other peach trees are in right now. 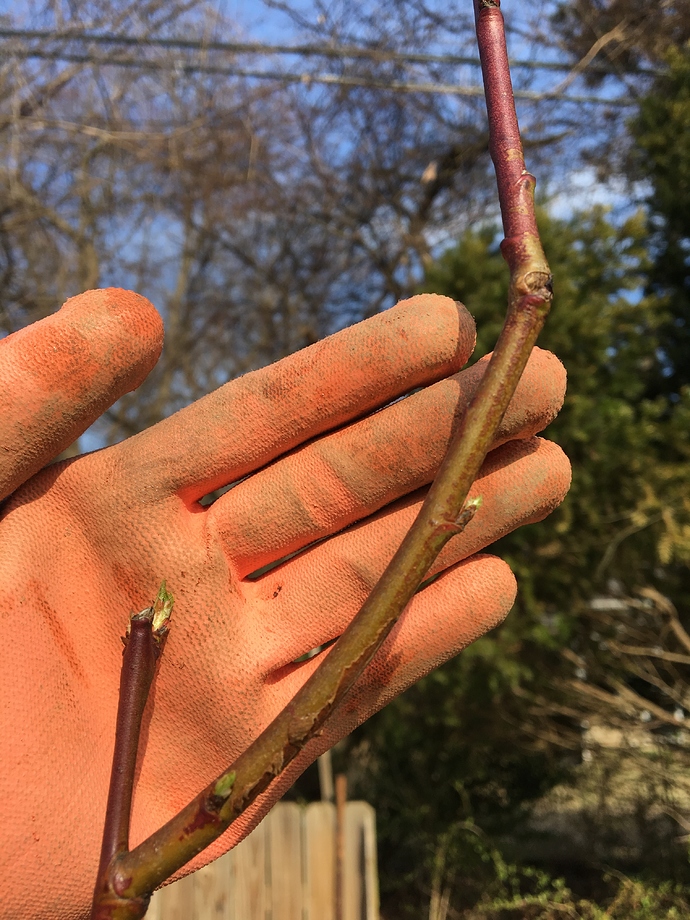 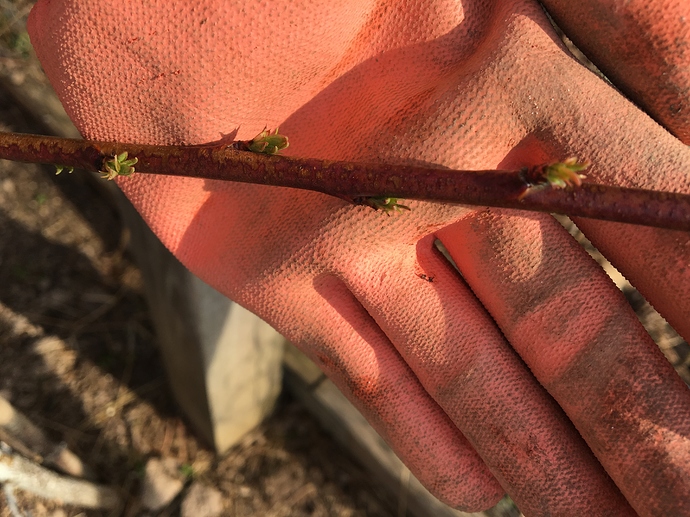 I don’t see the shriveled and dried up part in the pictures.

If I were to guess about why your fruit trees died in addition to ambrosia beetle attack, it is your soil. Your soil seems moist, too moist, maybe.

Also, I don’t what pathogens you have in your soil. I know some areas of my yard have serious issues with verticillium wilt. It is probably everywhere but some areas may be worse than the others.

To add to what I said before, instead of making a mound or a berm, I would make good sized, raised beds/boxes and use all new soil to plant new fruit trees in your yard,

Sorry that you have had to face disappointed a few years ina row while others seem to just stick their trees in ground and thevtrees just grow. It is frustrating.

I agree with Mam. Get your soil tested. Do you fertilize?

Sorry to hear it. I had 5 years old seeding peach died last summer. I think the borer did some work to it.

I do fertilize in the spring. This one didn’t receive any fertilizer since probably June of last year. I chopped off two big branches in early March. We had upper teens as low temps since then.

Yes definitely very frustrating. Every year I got nothing to show for the amount of time I spend with these trees.
Would a soil test show wilt in soil?

These twigs and buds look dried up.

From what I can see, the shoots don’t look too bad but the buds are blackish grey instead of sliver-white. I have an issue like that with a Redhaven. It is the peach tree closest to the southern tree line, so I thought there might be a connection. It’s probably a fungal infection, but what fungus? I’ve read that even Coryneum Blight (Shothole) can spread to buds and kill them, so maybe a rigorous fungal spay schedule can help.

Would a soil test show wilt in soil?

Is your soil high in clay and/or poor in drainage?

Yes clay soil. For the next tree I’ll buy topsoil.

Blackish bud in the picture is also Red Haven. I had shot hole or bacterial spot on peaches last year. My spray schedule with Bonide copper soap didn’t work clearly. This year I sprayed Kocide 3000. Hopefully that will make a difference.

Here is what the buds on the ugly redhaven look like:

Here is what the buds on all my other peaches/nects look like: 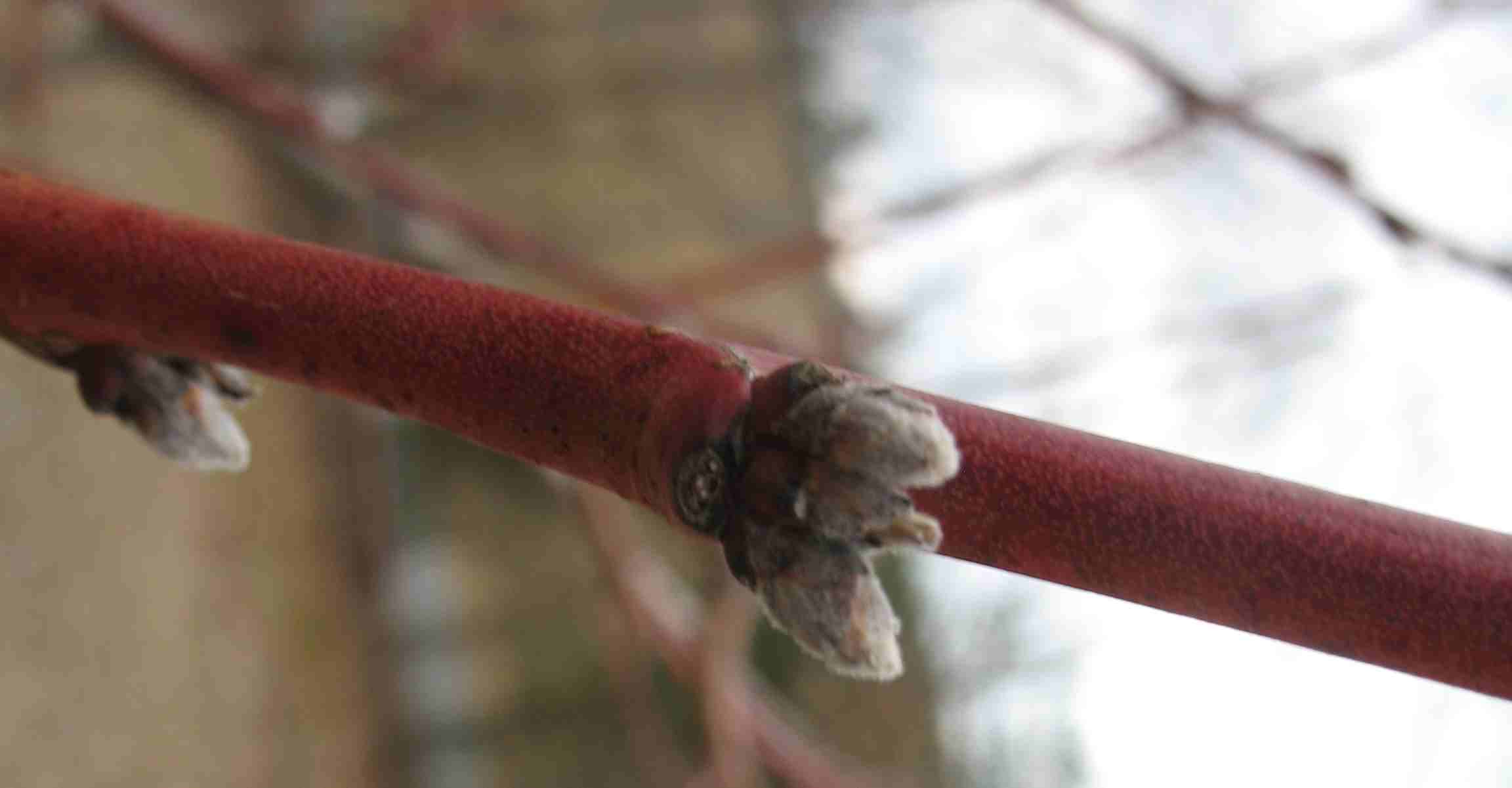 Strange that there isn’t much scab on the stems given the epic wet summer last year.

Do you think your Red Haven will still bloom?

So today I decided I’m not going to go without peaches again this year. Drove close to one hour to get to a fruit tree nursery and picked up a Contender peach. It’s a good size tree on Lovell rootstock and has couple of flower buds. I will let it fruit this year and hope for few peaches. Here are couple of pictures. 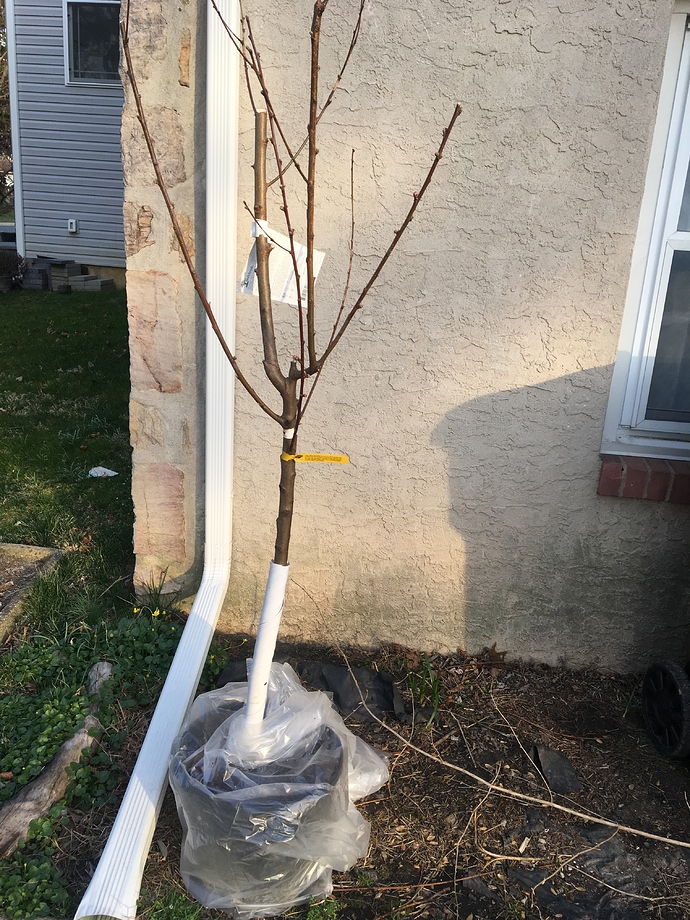 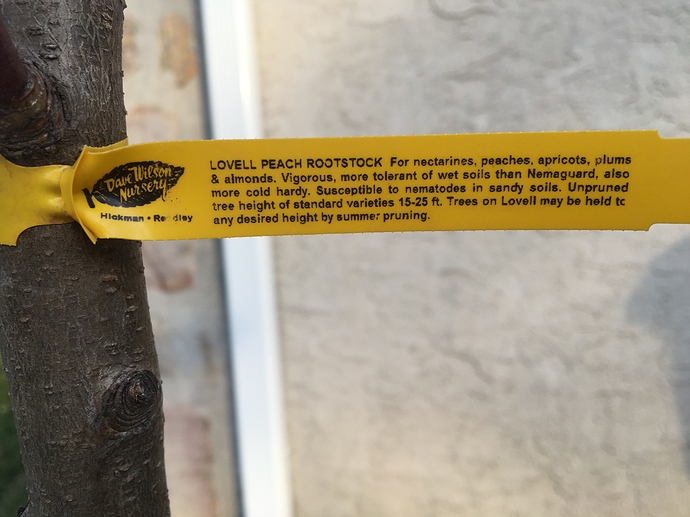 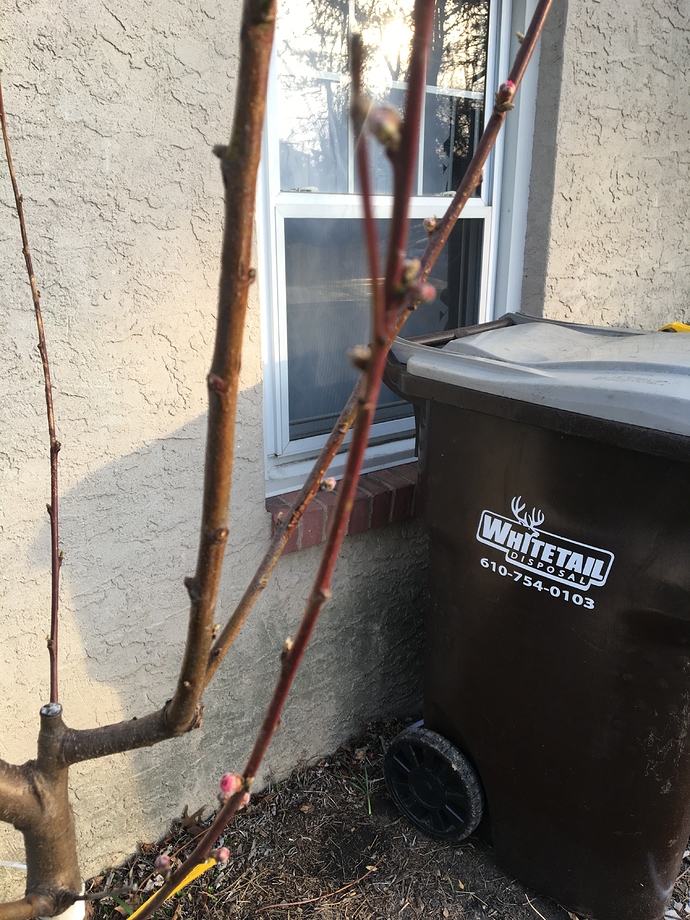 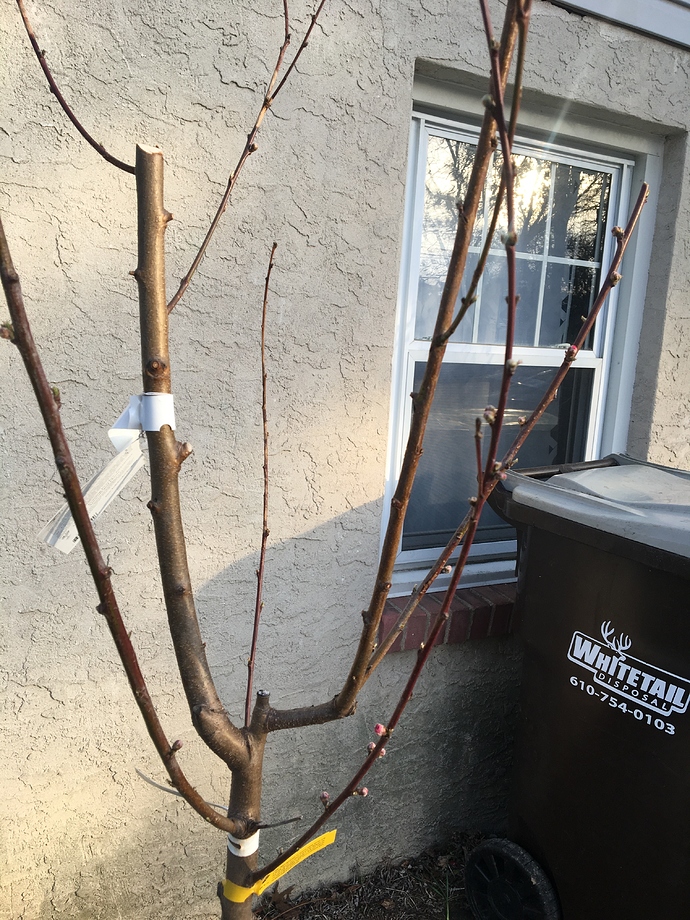 Maybe keep it in the pot until you find out what is killing your other peach trees, a fabric pot would stop the roots from circling and you could certainly get a crop off and then plant in the fall once you figured out what killed the other trees and how you stop this from happening. Although you can plant fabric pots right in the ground i would use a knife and cut them out or atleast some x slits through the sides. The massive air roots they create make them not really worth removing the pot from the tree as a typical transplant is my experience.

That is an absolutely beautiful tree, and quite large. I wish you all the luck in the world and I desperately hope it does result in you getting a few peaches. But don’t get your hopes too high. No matter how careful I am to minimize disturbance to roots, I must tell you that most of the time when I transplant a blooming tree from pot to ground, it ends up aborting it’s blooms or dropping its fruit Not sure why just taking the pot off the root ball and setting it into dirt causes it to drop blooms or fruit, but it often does. Again, I don’t want to steal what hope you have but I felt you should be prepared. But don’t feel like you wasted your time and money…that tree looks like it will definately give you some good fruit next year no matter what happens this year. Good luck.

I didn’t really see anything which looked dead in your pics, except maybe the first pic? But even that pic I could tell if anything was dead because it was too far away.

Some peach trees just wake up later than others. It’s also possible the pruning, if it was heavy enough, killed the young peach tree, if it is indeed dead. If it is dead, then I would say the pruning caused it.

I lost 9 young peach trees last winter because I pruned them hard (seven of them were the same variety, which is fairly winter tender). I’ve lost trees I’ve pruned in very late winter (i.e. Feb. or early March) when I thought it was safe to prune young trees. Very young peach trees can be very susc. to cold if heavily pruned.

I only pruned young trees last fall because the deer kept pruning them first. They do a horrible job of pruning because they rake off a lot of the trunk bark.

Some trees weren’t killed, but still lost some shoots I had chosen for scaffolds.

But with the pics you show, I wouldn’t take the young tree out if it was a labeled cultivar. The bark still looks green in the 3rd pic and even pushing growth in the 4th and 5th pic.

If you do decide to take it out, it’s no big deal. As I understand your posts, the peach in question is a seedling? If that’s the case, your Contender tree will probably make you a better peach anyway.

Hi Olpea… I’ll post a couple more pictures tomorrow. The last two pictures pushing growth are of another peach tree. Just to show the stage they are in. This tree has no growth at all. I plan on keeping it for another week. Just in case.
I hope it’s the pruning that killed the tree. Now I know not to do it until we are out of frost period completely. I would’ve wrapped it up if I knew it would get killed by 16 degree weather.

Do you think your Red Haven will still bloom?

I’m hopeful that some of the buds will be ok, like the ones in the photo above. There are many that look badly desiccated. They were black last year, but a freeze event took out all fruiting buds on all my peaches on peach rootstock. The blackened leaf buds did leaf out though.

I did spray dormant copper this past winter, for the first time in 10 years. I’ll probably spray this tree with with anti-fungals in the summer as well. It might make a difference.

IL847 As far as peach tree borers, I ordered just the lures the last two years from Gardens alive, and made my own traps from polyethylene bottles and tangletrap 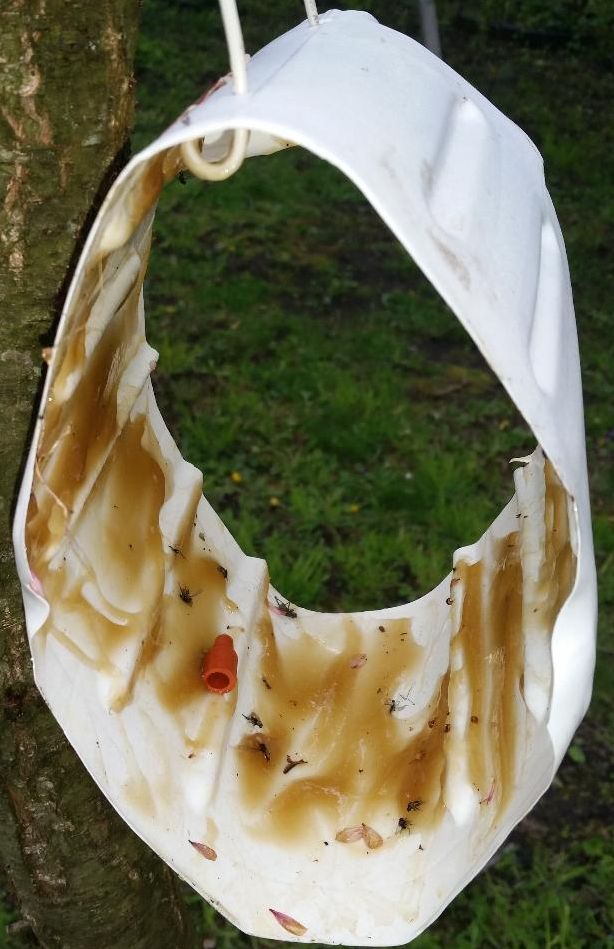 and WOW did I get borer flys! At the end of the season this was covered in black borer flys.
I just ordered two lures for this year, something like $18 for two with shipping.
see orange lure here:

Patrick, great tips.I might do the same this year. I put a 3 feet long flies stick out in the yard and it got a bird