I have 6 varieties of Limbertwigs starting their 3 year of growth. Only one a Victoria has a weeping growth habit. The rest of them have the same structure as any of my other varieties. Are limbertwigs tip-bearers so that when they start to bear they weigh down the limbs giving them the “limbertwig” appearance?

The only one I have is Smoky Mt Limbertwig and it hasn’t fruited yet. The limb diameter is small and bends downward. It looks like it might fruit this year and the buds are on the tip.

Myers’ Royal can exhibit the tendency you describe. Here is the late Tim Hensley.

My Black Limbertwig tree weeps without the influence of fruit. So far the fruit spurs are along the limbs, not at the tips. 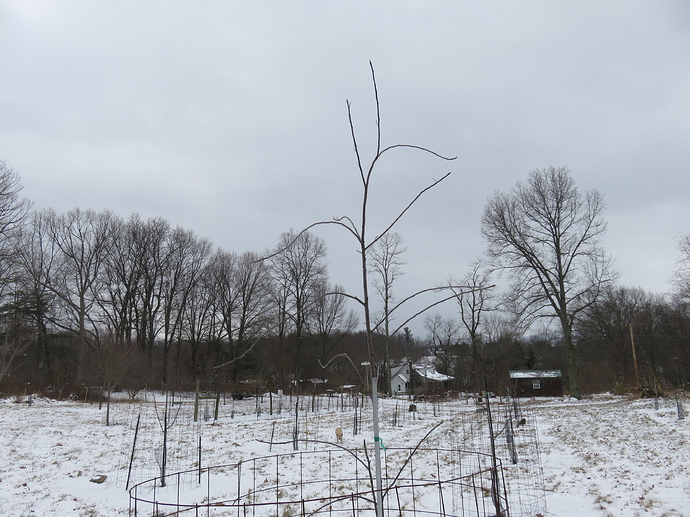 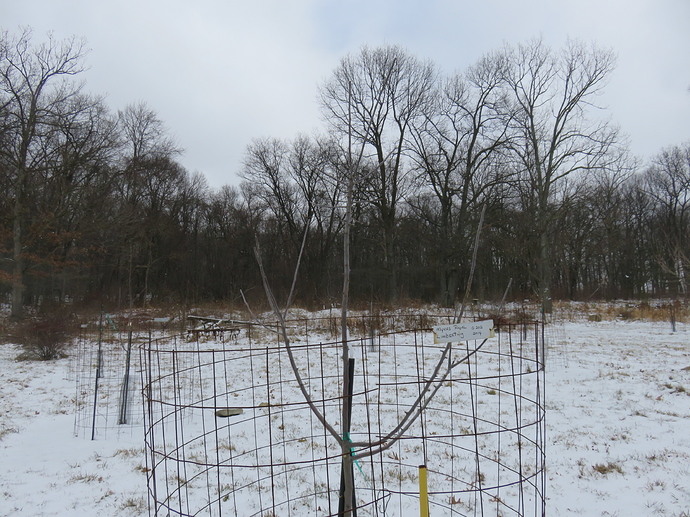 Any fruit so far off of them? If so which Limbertwig tastes better? I was looking at getting one of the Limbertwigs. Really interested in these two you have pics. I am starting to run out of tree room so I have to pick carefully now.

I’ve only tasted a few limbertwigs but Black LT is the winner by far.

In other words, there must be many really good limbertwig varieties.

I want to get a KY Limbertwig, Summer Limbertwig, Black Limbertwig. I also have been looking for a Appalachian Limbertwig. Only one guy has one that I know of and he says they may or may not be available for sale in a few years. That Appalachian Limbertwig is an all purpose one that sounds pretty good to me.
I tasted one a long while back ( not sure what Limbertwig it was nor did the person that gave it to me. It was just growing on their farm) and it was pretty darn good. The true test, for me anyway, is if I take a bite or two and I want to finish the rest of the apple. So many are one or two bite apples to me.

Greyphase, I have 6 Swiss Limbertwig that have been in the ground for 5 years now and while fairly precocious and productive it does not weep at all. It has nice spurs and no real tip bearing tendency. It wasn’t the best apple in the yard last year but the year before it was. What I wonder is, is SnowSweet going to be known as Minnesota Limbertwig? I gave one to a niece and planted one here and they both look like Willow saplings. As wild as Virginia Beauty wants to run, if it fruits this year it’s going to be drooping pretty severely too. Seems as if I read somewhere that at least to some folks the term referenced a class of flavor(s) as much as anything. Mike C, in '15 we had a nice crop from 3 apple varieties , Calville Blanc, E. Spitzenberg, Swiss Limbertwig, S. Limbertwig were the best to both my wife and I. Last year wasn’t so great because I let things fruit too young and don’t much care if they go biennial and the Swiss was kind of weird, almost vegetable. Of the 3 Calville seems the best tree and a darn fine apple but in a good year I’d put Swiss up with anything I’ve ever tasted, hard, tart, cooks well. Tom

The Swiss LT is supposed to be a very nice deep color. It may ripen too late for my area. I am in 5b. I have a Calville planted. One apple last year. It was too eaten by bugs to enjoy though. Perhaps this year I will get usable fruit from it, more than one apple. Some LT’s do not weep or some weep very little BUT they have that Limbertwig taste. I just planted a Spitz last year. I tasted one a year before and that is what had me hooked to try a Spitz out.

Thanks for all the replies. I learned a little more about these mysterious Limbertwig apples.

Interesting that you describe your Swiss LT as tart. I see it described usually as sweet.

Yes the Swiss is a very dark pretty apple, medium sized even when the tree is carrying more than it perhaps should. Probably sub acid would be more accurate than tart. I need to buy a refractometer this spring so I can’t say yet what it sugars up to, but it is a rich apple that has a bite to balance the sugar. It comes ripe for us right with Calville and Sptiz. and holds on the tree well as do the other two. Matt, I was saddened to read your reference to the late Mr. Hensley, while I never did buy any trees from him ( darn it I should’ve bought that Winesap he was proud of) his videos were informational, inspiring and enjoyable. Is there a thread here that I’ve missed with an obituary for him?

Here is thread on Tim Hensley.

Shocked to just learn of the passing of Tim Hensley of Bristol, Va some six months ago. Many of you may have used his oldvaapples.com website that was crammed with unique information on old southern heirloom apples. Tim left a great teaching library of youtube videos (google Tim Hensley apple videos) of apple tastings, pruning, grafting how to’s. I hope his huge collection of Southern heirlooms will fall into good hands. A gentleman and a scholar. Here is a classic Tim Hensley video on the …

WHAT? He passed away? So sorry to hear that. Shocking actually. God Bless his family.

I still see his old website has been suspended. I enjoyed reading the info on his site and also the nice videos he and his family did. I hope they come back online and keep the business going. Probably will not, family run businesses seem to fade away when the main person passes away. Sad that he did pass away. He seemed like such a nice man and great father.