I got rid of most of my hardy kiwis since the fuzzy ones were tasting better. But I never really got a good crop from Annasnaya until this year. It is better than the other small green hardy ones I tried, its going to be a keeper.

The green-fleshed hardy kiwis are sometimes “too green” for me, they are green like a green bean and have off flavors. But the Annasnaya are relatively good. Ken’s Red is still the best hardy kiwi I have tried, its not green-fleshed.

I have it but it still hasn’t flowered. I am moving it to a new location. Hopefully i can get a crop at some point.

How do you trellis yours? One issue i was having is they were just growing everywhere because i never installed a proper trellis. They do grow like weeds.

I have a grape trellis I put them on, its just a single wire. It has been working fine, but I do prune back several times in the summer. I use battery-operated hedge trimmers, I can buzz them back to 1-2’ shoots in no time at all. Do that twice a summer and you will be good.

I use battery-operated hedge trimmers

The battery operated tools are so nice around the orchard and house. My cordless list is growing.

I wasn’t as happy with mine this year as last. They were still good, but they didn’t taste as sweet and there was more of a sharp flavor to them. I’ve always gotten an unpleasant tingling sensation from fuzzy kiwis (yes, I peel them

). I never got it from the hardy kiwis until this year. My daughter complains of the same thing (but louder…). I did let the vines get much more overgrown this year, so that could be part of it, along with the weather.

The brix ranged anywhere from 15-24, so most did get sweet. The ones in the 15-18 range were often under-ripe or could have benefited from more time in the fridge.

In terms of production, I think I got about double what I got last year (I’ll check my recent notes soon), mostly from a pickup in Geneva’s productivity. The Issai had some winter die-back, so I think it produced the same or less than last year (3 quarts). The Geneva was quite productive (maybe 4 quarts) and the “male” vine produced 1-2 quarts. I’m not sure how much pollination I’m getting, as I didn’t see any male flowers.

Forty Niner produced only a small handful (2nd year in a row) and Cordofolia & Ken’s Red have not yet produced anything. Both of them bloomed, so it is possible that a lack of pollination is holding them back.

I’m looking forward to my younger planting. I think I did a much better job with that trellis. I should be able to do a better job keeping them thinned out and have enough space to get around it.

I use to eat the brown fuzzy ones skin and all…i’d just dig out the end (which is sharp) …i got sick of peeling them. I don’t eat them that much anymore. Sam’s Club has the gold kiwis that i should try again…

I just cut fuzzies in half crosswise and suck out the goodies. I’ll eat a bunch in no time at all that way.

@BobVance, the Geneva to me was often odd in flavor, some sharp flavor I did not like. The Annasnaya is relatively better. I didn’t measure the brix but it was very high, it sounds similar to yours.

Got any fruit from your kiwis yet? Anything to report on productivity? Taste? Winter hardiness?

Last year was a complete bust from a couple of spring freezes. I got nothing in 2016 but I got a ton of fruit in 2015.

I replaced the dead Cordifolia with Rosanna in June of 2015 and it hasn’t fruited yet.

My memory is a little fuzzy on the 2015 harvest, but from my notes I wrote:

9-28-15 huge harvest of Dumbarton Oaks, many were very soft/rotting

Unfortunately I don’t have any notes on taste, but my memory was they were all good and sweet, and tasted like hardy kiwis (!). Anna was the most prolific and produced way more fruit than we could eat, but fortunately, they kept a long time in the 'fridge. It had a great and sweet taste. Anna probably produced more fruit than the other 3 vines combined in 2015.

Dumbarton Oaks was over ripe and probably close to being sickeningly sweet, but that was my fault for not harvesting them soon enough

Ken’s Red was (I think) the biggest berry out of them all. I don’t recall much about it though.

My largest vines froze on the top half of the vines last spring in that late mid-May freeze, so only had a couple fruits, which the critters must have gotten eventually. In 2015 I had several handsful, and they were tasty, as good as or better than the store Hayward ones. I squeeze them to be sure they are soft before I pick them. Unripe are nasty! I have Victor and Emerald, I believe, which fruited, plus some September Sun Arctic beauties and Natasha, Tatyana, and one other Siberian arguta whose name escapes me, which have not born fruit yet. The Siberian vines were small, and I thought the late frost had killed them, but they recovered. They are just all growing on woven wire or chain link fencing, and I have never pruned any of them in the several years I have had them. They just don’t grow very vigorously in our poor soil and cool climate, I guess. This year I am adding a Matovaya kolomikta from Burnt Ridge. They survived a lot of neglect and drought when we were away from home for a couple years caring for my dad, including the bitter cold winter a few years back, so if you have some space along a fence, give them a try. I live near St. Paul, MN.

I had the same problem, I had about a 10% crop which was all taken by critters. I did end up getting one kiwi which I should pull out of the fridge soon and try.

You folks in zone 7 should be growing fuzzy kiwis, other than Kens Red I prefer them by quite a bit to the hardy ones.

This guy knows where it’s at!

What are your favorite varieties of fuzzy kiwi and the most adaptable to zone 7 conditions? If I remember you were growing saanichton, blake, and exbury several years back among possibly others I do not recall. Do you have any photos of these posted? 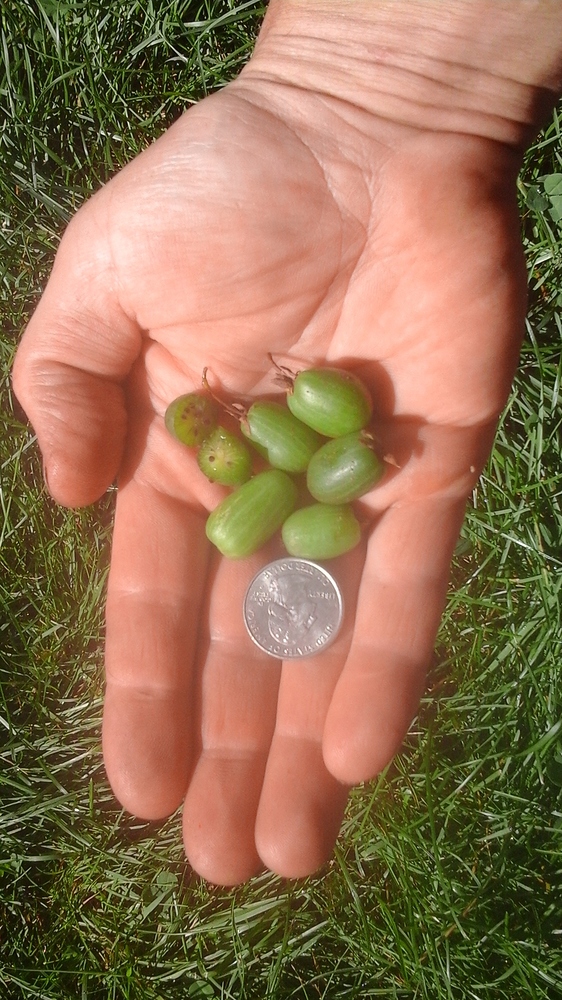 Of those three Saanichton is the best. Exbury is fine but small. Blake has not fruited yet but I think has some this year. I prefer the yellow ones, El Dorado is a good yellow.

I have recently had problems getting frozen out, this has also affected my apricots. The hardy kiwis are a bit better then fuzzies but they also got frozen out last year. This year I have a partial crop of fuzzies and have most of my hardy crop. For ten years running I never had any problems with kiwis or apricots freezing out.

Hi, I’m new here and thought I’d comment on growing hardy kiwi in Zone 7. I’m in the western North Carolina Mountains. I planted a Meader male, Dumbarton Oaks, Anna, and Cordifolia in 2015. All are very healthy and growing strongly on T supports with 5 wires. They are truly gorgeous vines, requiring nothing but pruning in dormancy and few handfuls of 10-10-10 in Spring. Japanese Beetles have been the only problem, which I’m countering with Milky Spore Granules. Spring 2020 all 4 vines bloomed for the first time. Unexpectedly, we had an April 18th heavy frost. Sadly, all blooms and leaves were frozen and the next day turned black. Within weeks new leaf shoots formed, but no flowers returned for the season. This year, on April 2, 2021, we had another late, hard freeze (to 27 degrees), lasting about 6 hours. The vines were not yet in bloom stage, but had leafed out about 70%. My husband and I covered the vines with a heavy plastic this time, but the leaves of the Cordifolia and Anna froze again, wilted and turned black. The Meader male remained mostly unaffected and the Dumbarton Oaks retained about 30% of its green leaves. Last night, April 3rd, another hard freeze (to 27 degrees)…Safe to say, I don’t expect the leaves of the Meader male, nor the Dumbarton Oaks to have survived thru another night of hard freeze. Although I expect all 4 to form new leaves, I am unsure if they will bloom this year or if late freezes also killed any forming flower buds. So, the moral of my story is that in Zone 7 early Spring warm ups will cause the vines to leaf out and then any late Spring freeze will kill the leaves and blooms, giving no fruit for that year. Yet still, if you have the room in your orchard, hardy kiwi is a beautiful addition. Just don’t expect fruit every year. Happy gardening to all!

Welcome Linda, thanks for sharing your kiwi experience. I hope you get some seasons when frost isn’t an issue for your vines! Mine took around 5 years to start bearing, they have been annually reliable ever since here in z4b Maine, I’m also on a north facing hill side which might help delay them a bit in the spring. 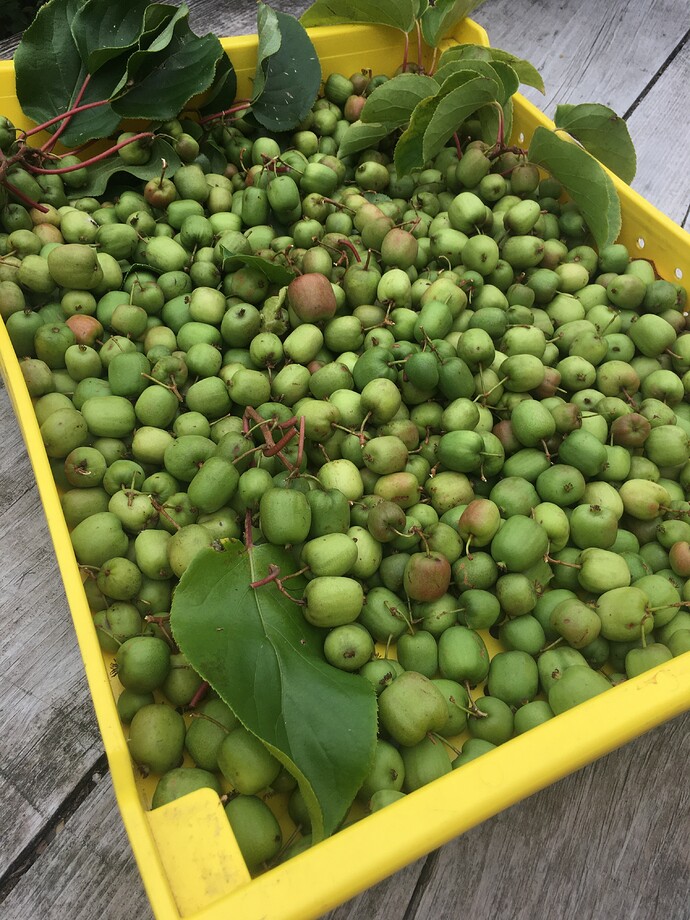 Sorry to hear about your bad luck. Kiwis do love to leaf out too early for many places in the US. Where you are seems to be one of the worst places, also western VA and TN are also challenging places. I am a little better in that only once in 10 or so years do they get damaged.

We had a freeze last night, I am going to go out soon to look to see how the kiwis did. I probably lost some of the further along leaves.

Where you are seems to be one of the worst places, also western VA and TN are also challenging places

What makes those places worse than other places on the East Coast? I don’t have any reason to disagree, but I’m wondering what makes for the differences.