– Izu, Shinshu, and Kanshu may be OK (late Oct in Japan).

– Suruga and Youyou are too late for here (early/mid Nov in Japan).

– Izu appears to produce the best fruit. I’ve seen it mentioned in posts on this forum. Reports I’ve seen say it ay be hardy only to ~ +5 F.

– All the varieties produce fruit that is described as fast-softening after picking and “very sensitive to chilling injury” during storage.

Another paper discussing seven releases since 1990 repeats Soshu, Shinshu, and Kanshu but adds Yoho, Taishu, Yubeni, and Kishu. So that makes 10 in all.

– Yoho, Taishu, and Yubeni ripen too late (November in Japan).

So then Soshu and Kishu seem to have potential as medium to very firm but juicy fruit, with little cracking or skin discoloring.

Does anyone have information to add, especially regarding (1) ripening times, (2) cold hardiness, and (3) fruit quality?

I’ve tasted 3 early varieties, Soshu, Izu, and Kitaro, then 1 late variety, Taishu, while visiting Japan. The former 2 were definitely juicier and softer in texture than something like a Jiro. They were very good in my opinion. Taishu was harvested with some green still, and rather hard. Although there seem to be many different varieties, more conventional ones like Jiro were the most common in mid-October when I was there.

There is an interesting variety called Cardinal that OGW is selling. They state it’s a super early Korean variety, but I have a strong suspicion that it originated somewhere else, and could also go by an alternatively spelled name. That might be something for you to explore if you are interested in a potentially unique variety.

Thanks, that’s great info on these new releases. One clarifying question: Were Soshu and Izu inherently “juicier and softer” than Jiro or could that have reflected earlier ripening of those two varieties.

That might be something for you to explore if you are interested in a potentially unique variety.

Yeah, I’d like to avoid buying s synonym based on some mere marketing, such as a name change to American.

@PharmerDrewee – So I took the plunge – and I owe you some credit. Last winter I got on the wait list at OGW for Cardinal, assuming that it is a renamed Soshu. I’m not necessarily optimistic that it will survive here, but if it is the earliest PCNA I had to try. OGW notified me a few days ago that a few trees were available. I bought one. Given the temperatures, I opted for the fast but expensive shipping. 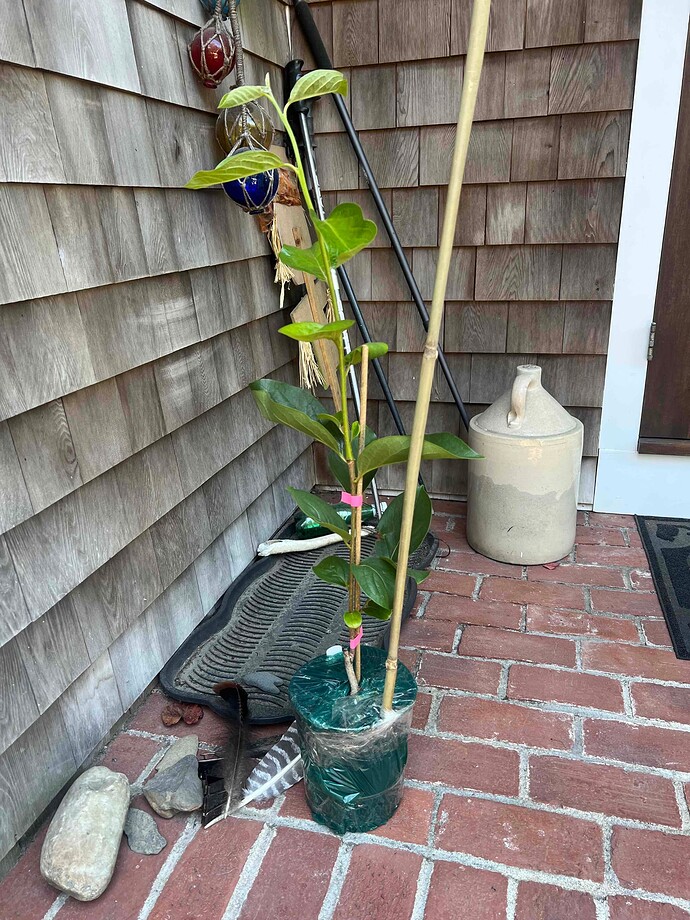 Wow! That’s pretty sizable. Mine was tiny when I got it, and is a bit over 2 feet tall now. I have it in a larger pot to try to size it up some before letting it endure a winter outdoors. The variety they call Raven seems much more vigorous. It put on a hefty 2nd growth spurt just now while Cardinal only had a flush of growth during the spring.

The leaves on Cardinal seem a bit distinct from my nonastringent trees that are likely Jiro and sports. It’s more similar in foliage to my Matsumoto Fuyu.

All of my newly grafted trees had a growth spurt in spring as well as another starting in July and ongoing.

The leaves on Cardinal seem a bit distinct from my nonastringent trees that are likely Jiro and sports. It’s more similar in foliage to my Matsumoto Fuyu.

Does that help? There’s no Jiro at all in the ancestry. It’s Okugoshu and Fuyu with a little Fukurogosho.

p.s. The tag on the tree says that it is hardy to “Z7A - 0 F.” That’s not quite hardy enough to be reliable here so I may have to either grow it in a pot or give it some minimal protection in winter.