Anyone else love Passiflora (passion fruit) like I do? I may be a little obsessed and have too many

I have become a little obsessed with passifloras. Mostly try to grow them for fruit which is my favorite in the garden. I have begun collecting different types which is a problem since I am out of room to plant any of these. Most are in pots until they flower and set fruit to make sure they do. I have found a lot of self fertile ones have trouble setting fruit with out cross pollination. I just added a few more to my collection yesterday. 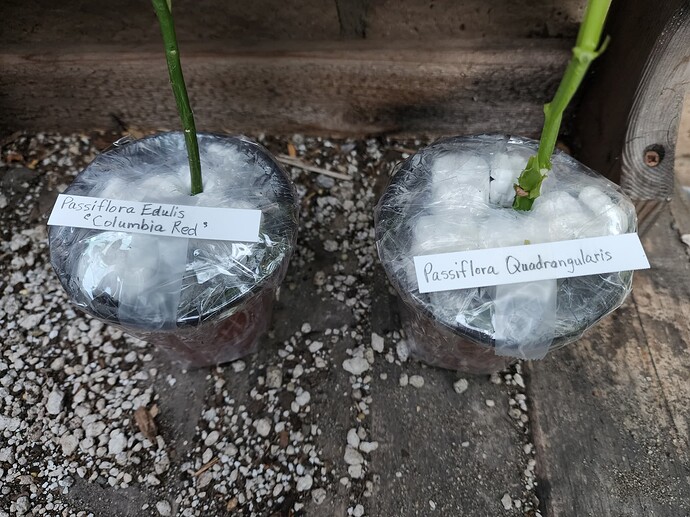 I’ve only ever grown Maypop, and that was when I was in zone 7– now am in zone 5.

Are there any cultivars of Maypop, or is there only undifferentiated seedlings?

I tried that in my greenhouse last year, and it filled the rafters without flowering, then died over the winter even though the greenhouse low was above 40°F. When I dissected it, there appeared to be a fungus under the bark. Not sure if that was the cause of death or just an opportunist after the fact, though. Have yours fruited yet?

I’m also growing some incarnata seedlings this year. My plan was to try to cross them with the maliformis until that failed to wake up this spring. Now I’ll just grow them for their own fruit, I guess.

There are crosses with Maypop (or incarnata). Passiflora Incense is one and so is passiflora lady margaret.

I am blessed to live in a 10b zone where most passiflora thrives. I do have a cabin which is 8a and I have been thinking about putting cold hardy varieties up there such a incarnata and caerulea. A lot of my passiflora are fairly young with only the Edulis Frederick and Edulis Red Rover fruiting. Passiflora incarnata has flowered a ton, but I cannot get it to set fruit by crossing it with a edulis variety. Passiflora ligularis is on it’s third year from seed so I am hoping this year or next I will finally get flowers. Passiflora phoenicea doesnt set fruit to my knowledge even with a cross. Its a pretty flower so I keep it around.

I have Frederick and Red Rover and we love them both. I have my eye out for P. Tarminiana.

I have found that the bees will not always visit the flowers if there is something else that they prefer and I used to have to do a lot of hand pollinating to get a consistent crop. The bees seemed to like some ice plant better than the passionfruit, so I ripped out most of the ice plant and that solved that issue.

I hand pollinate everything including trying to cross pollinate. I have different colored electrical tape and I mark each flower I pollinate. My Passiflora Tarminiana is fairly young at less than a year old but it was a rooted cutting. I was hoping it would flower this year. I got it to help cross pollinate passiflora mollissima since I cant seem to get that to set fruit on it’s own.

I’m in zone 7a and very excited to plant some maypops once my fence is replaced with something more trellis friendly (by beginning of Spring, hopefully).

Do you have a favorite maypop variety? Peaceful heritage seems to really boast theirs so I was thinking I’d go for that, but it would be cool to have another variety or two to compare it with.

I actually havent had a fruit from a maypop yet so I cannot comment. Sorry!

Do you have a favorite maypop variety? Peaceful heritage seems to really boast theirs so I was thinking I’d go for that, but it would be cool to have another variety or two to compare it with.

I’m growing seedlings from @JeremiahT’s local population of incarnata, but they are still small so I can’t comment on the flavor yet. Here’s where he posted about them:

Hardy Passiflora (maypop). Too good to be true?

My wild local strain produces tasty fruit in fall. I think it’s actually better than the commercial tropical passion fruit I have tried, though the seeds of the maypops are bigger and crunchier. There’s a lot of variation in the genetics and flavor of maypops, though

I’ve had wild maypop fruit a few times in Georgia and Virginia, and they were ok but a lot less juice and flavor than a fresh edulis, so I’m hoping these will be better than the ones I’ve had. The pictures in that thread definitely look better!

Here is a photo from a couple days ago of my new seedlings: 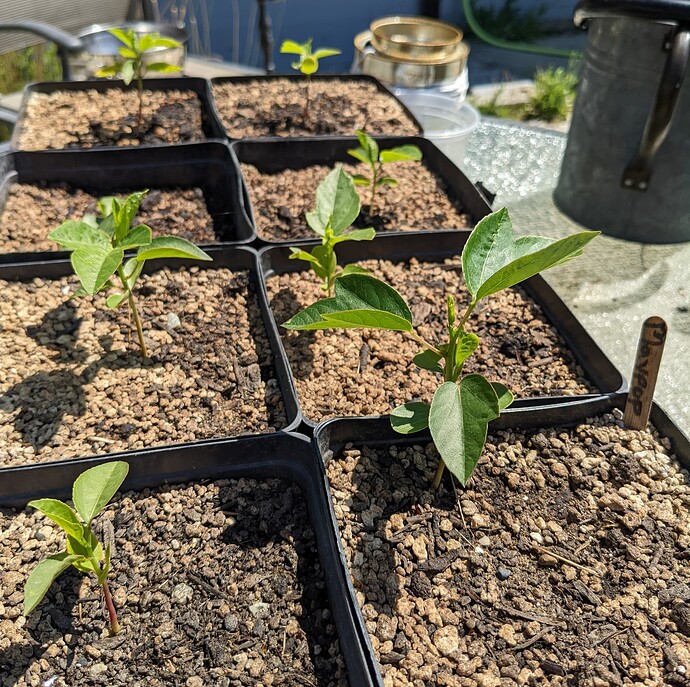 I’m growing Frederick here in Zone 10. It’s a monster of a plant, probably a good 20 feet long . . . and that’s with trimming the ends. I had a bit of a die back this year, thinking it was finally at the end of its life (planted in 2015) but after trimming out a bunch of the dead stuff, it has gotten a second wind. It blooms every day and has probably 30 fruit on it at the moment (hand pollinated because I don’t have the right kind of bees to do the job). I didn’t get much out of it last year because the night critters usually beat me to them.

But, when I do get a lot of them, what I do is to process them and save them by the half-cup and freeze them. That way, I have enough to make some jam or process it into juice. Yummy stuff!

Interesting. I find they leave the passion fruit alone due to the super thick rind. I cant get enough. My 5 and 7 year old will eat them plain, scooping out the sides and pulp and munching down on them.

I bought 2 plants from Costco when they were cheap, they were so prolific and I don’t eat them, I gave all of my fruit away to my sister, finally I got fed up and removed them. They take over my yard otherwise.

I’m not entirely sure which night critters it is that raid my garden. My guess is either tree rats or possums because they leave behind hollowed-out shells. I KNOW the possums are guilty of raiding my nearby Pink Lady apple tree. It usually starts in September, first with rustling in the leaves and then the unmistakable sound of fruit invasion.

The tree rats used to raid my tomatoes, but they have new competitors. The super fat lizards aren’t picky. They’ll munch down on green tomatoes during the day which means that the tomatoes never get that blush of color that the rats favor. They’ve even started eating my green beans! The nerve! Who knew that suburban living came with so many wildlife issues?

I didn’t know lizards eat tomatoes, what kind, I have fence lizards. But around here nothing touched my passion fruit. They tend to drop to the ground.

I’m not sure what kind of lizards they are. I’ll try to get a picture later in the day when they’re out and about. They may start out small, but they have a lot to eat here and end up quite fat.

Yesterday, I shook out my passion fruit vines as I tend to do to shake out dead leaves. A number of old ravaged passion fruit fell to the ground. Here’s a picture of the evidence of critter damage. 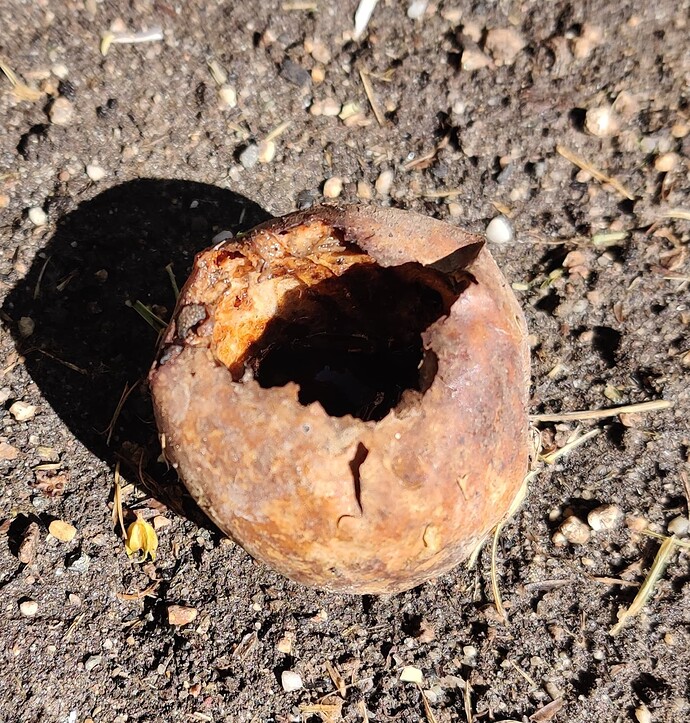