Thanks k8tpayaso!
In that case, it’s not a good idea to hang them over the windows. It’s OK for birds, but definitely not good for snakes to make home there.

Thanks dimitri!
I wish my fence has a top like the one in your picture. I think I will make use of the existing fence. To make it work I will prune the muscadines heavily. Luckily the fence is long enough for them to grow along with. I will just control their width.

Whatever you do, they’re worth the trouble. The things taste so good. When I tried my first Lane, I was hooked. I had never tried a muscadine before that. Just amazing. Tried a few more this year. Yup. All of the ones I tried were delicious! Such a unique flavor. When I get my 4 acres spun up, I’m planning on starting more vines from airlayers.

They do grow like monsters if you use something like Ison’s fertilizing schedule the first year. I recommend it. I honestly thought I’d kill the things with this amount of fertilizer, but all my vines thrived and even pushed through the summer heat without stopping. I’ll follow it again this year.

Looks like others have covered why not to put them over the windows. I will add on to what others have said that muscadine vines grow big and fast. Once established the required annual pruning is simple when you can get to all areas of the vine such as a single wire about 5-6’ high. If your only planting options are near obstruction at least make sure it is easily reachable from all sides. As good as the fruit taste it can be a hot job made worse when picking near obstruction.

I’ve got Ison & Black Beauty, so I will just add a Lane later. For some reason, I could not find Lane on Ison’s Nursery website. That’s very odd.

They are sold out. Anybody know where else you can get Lane?

EDIT: ended up ordering from Bottoms Nursery, they did a great job with handling my order.

Bottoms Nursery shows them in stock. Best to call.

Another reason to not grow muscadines on a window or too near a building is because the vines become quite girthy over time. If the vine gets up under the siding or in the framing around a door or window it can quite literally pry your house apart as it grows in girth. A lot of woody vines can do this.

Just sent you a PM.

Muscadines I’m growing or have grown:

Hall - Young vine. Had a few nice flavored berries.
Delicious - Will overbear if you let it. After five years of heavy yields, it was Winter killed to the ground last spring. It sprouted from a root and it refilled the trellis by end of summer. Should get a decent crop this year. This is a very nice flavored berry but I’m doubting its hardiness in Zone 7b.

Southern Home - Another one that will overbear if you let it. After five heavy bearing years, it to was killed to the ground last spring. It didn’t sprout from the roots so I replaced it. I might have a few berries this year. I love the flavor and texture of this grape. It is a cross between Summit muscadine and a complex hybrid with various parentage including vinifera.

Black Beauty - Nice flavor with edible skin. Yields have been variable. Two of the vines have been killed by ambrosia beetles. They tunnel into the vine and create a chamber where they lay eggs and grow a fungus to feed their young. The fungus is what eventually kills the vine. Ambrosia beetles attack vines regardless if their healthy or not. Insecticide results are variable in efficacy. I haven’t had many attacks since I started spraying vines in March with bifenthrin. I also spray with systemic fungicides such as azoxystrobin, which may work against the fungus the beetles cultivate.

It should be emphasized that muscadines - especially highly selected domesticated muscadines - tend to overbear which leaves the vines susceptible to winter kill. There is a fairly simple way to prevent this. Winter prune the vines heavily and fertilize them in the fall to build their reserves for winter. Since I started using this method, I have not lost any vines. In the past I have lost Ison and Supreme that were large healthy vines. You MUST take steps to keep overbearing from killing muscadines.

I like your method. When do you do your fall fertilizing and what do you use?

Fertilize right after the grapes have been harvested while leaves are still on the vines. I’ve been using 13-13-13. My soil is moderately deficient which is why an all purpose fertilizer works.

Paul began to sell in ison. There are only 200 of them. You need to hurry up to place an order 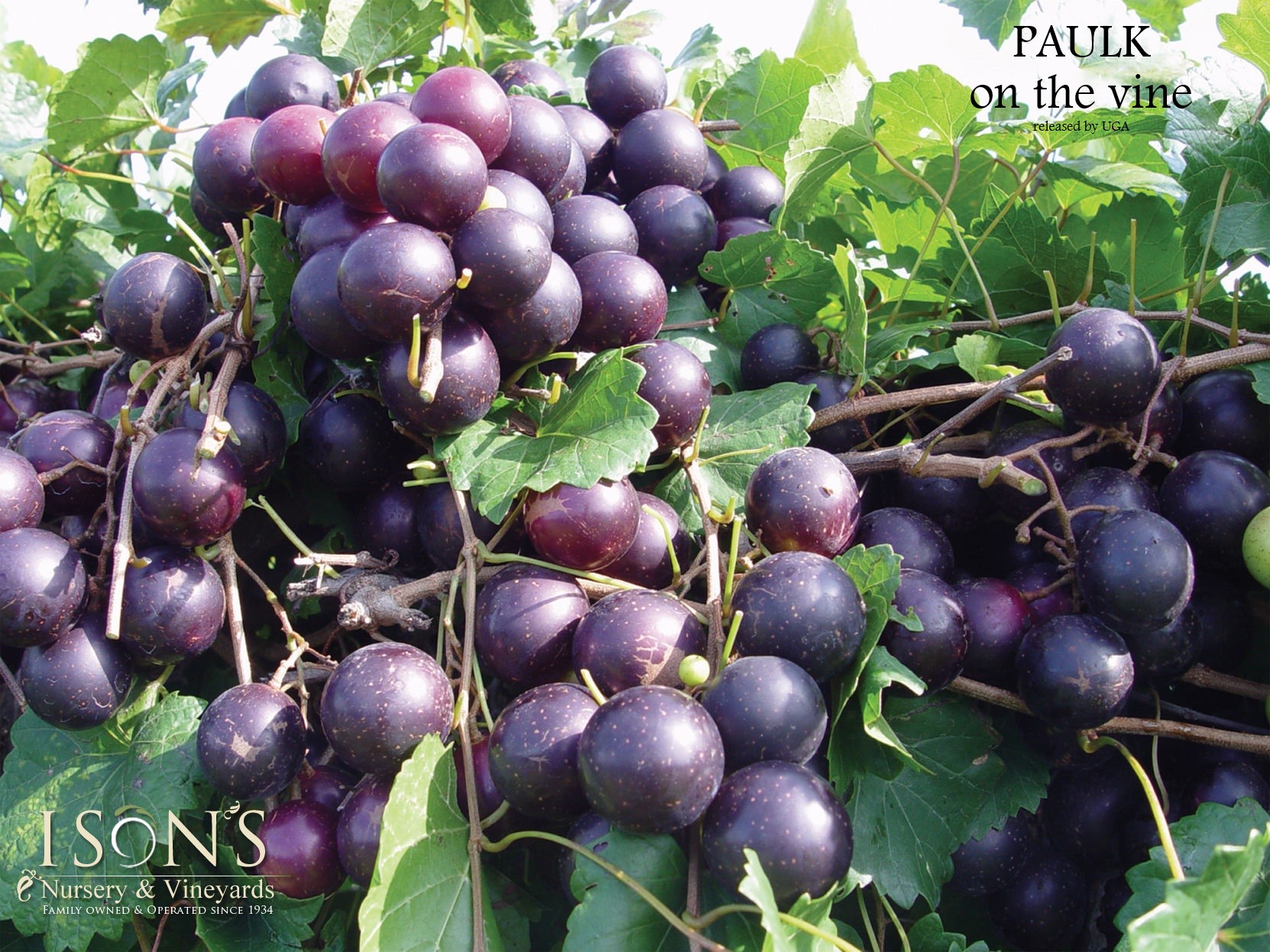 The Paulk muscadine is a newly released variety from the University of Georgia, offering very sweet flavor and consistently high yields. 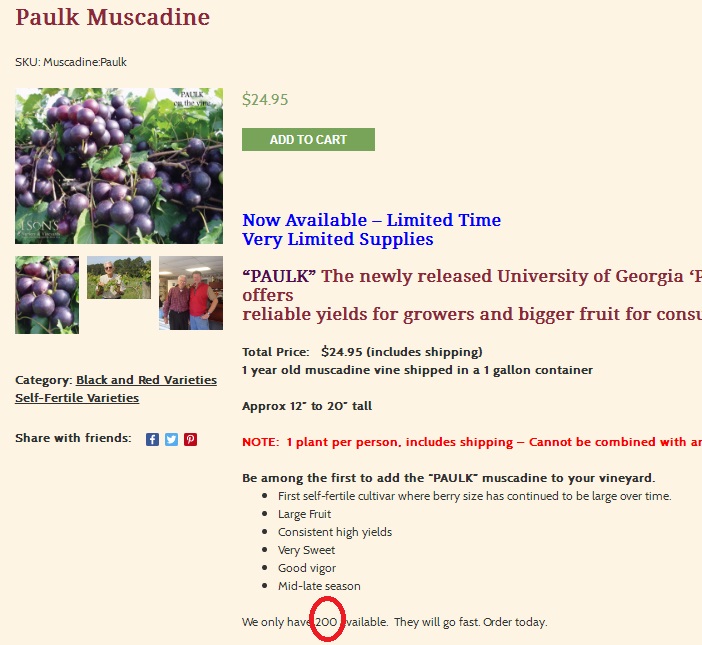 For those growing muscadines in or around zone 7: when do they start showing signs of breaking dormancy for you?

Mine look just like the day I planted them and I’m wondering if I should wait a few more weeks or start looking into ordering replacements.

Mine broke dormancy 3 weeks ago. I’m in North Alabama. Even the plants I set out this year have broken dormancy.

I’m in 7b. I’ve got Supreme, Late Fry, and one other whose name I forget right now. All broke dormancy a couple of weeks ago.

@Fusion_power @haldog Dang, I wonder why mine are stuck. The Black Beauty I got from Isons and planted the day I got it (3/19) - should I even try contacting them for a replacement or something?

I guess ill give it another week and then decide what to do - hopefully everything isnt sold out.

The Black Beauty actually looks a little plump and well hydrated vs the Lane which is a bit desiccated.

Hi, Dimitri,
No worries!
I got Black Beauty and Ison from Ison’s as well. Planted on 1/27. It just broke dormancy last week. Yours should be soon too. 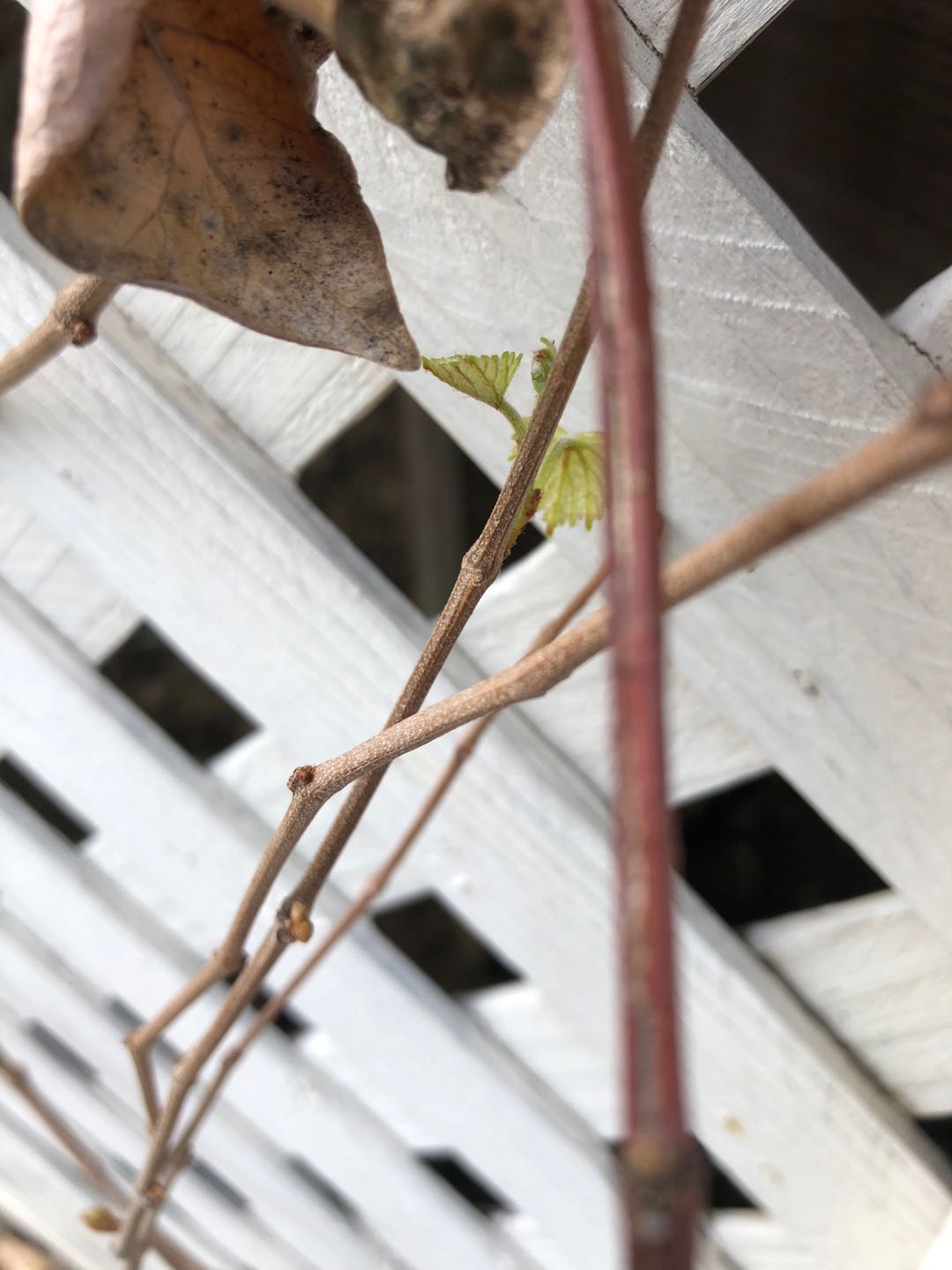 Be patient. I’m guessing they will start growing soon.