Had couple Lane show up today from Wilson Bros Gardens (Isons didn’t have). Both vines were broken in several places including right near the base. Some wounds looked pretty old and rotted so I think they were like that before being shipped. One of them is effectively nothing but a pot of roots now. I think I can salvage the other.

Waiting to hear back from them.

I’ve decided to give up growing table grapes. My Reliance is covered with fruit every spring but black rot gets it every time.
So I’ve finally decided to replace it with a muscadine. I’ve trained it nicely to one trunk and two arms so I don’t want to pull it out and plant a muscadine. I’m assuming I can graft muscadine on to reliance grape?
Now, my question is what variety of muscadine should I pick if I like my table grapes crunchy, seedless and sweet? I haven’t tasted muscadines so I can’t tell you what type I like there. Sweet is on top of list, then the ease of growing, then crunchy, then seedless and finally red, black or purple. (Not green when ripe)
Can somebody suggest a variety? @Auburn? Also can somebody in my area comment on the ease of growing part. Is it really much easier in humid East than table grapes?

Sweet is on top of list, then the ease of growing, then crunchy, then seedless and finally red, black or purple. (Not green when ripe)

Lane is a self fertile sweet and crunchy seeded muscadine. There are only a few seedless varieties I know of Fry seedless, Razzmatazz, and the one I have Oh My. The Oh My I have has grown well this year and should provide a good sample next year. Both Oh My and I think Fry seedless are bronze types and Razz might meet your color requirements. Grafting muscadines onto table grapes might be possible but I haven’t seen it done. Although I like the taste of muscadine they are considerably different from table grapes and I would suggest picking up a package from a WalMart to see if you like them. In my area muscadines are a pleasure to grow and they are very productive. I hope someone from your nearby location can verify hardy types for your area.

Grafting muscadines onto table grapes might be possible but I haven’t seen it done.

Not recommended as muscadines are typically much more vigorous than any of the table grapes. Also, chromosome count differences cause a few more problems.

Are there any Muscadine grapes that could ripen up in the Puget Sound region?
I tried Hunt and Roanoke, years ago.
The vines did grow, but they didn’t even bloom until July, and the fruit failed to ripen much.

This is the first year that I’ve had muscadines on a decent wire trellis. As I reported earlier - I lost my Darlene. But it came back. Dixie is doing quite well. And Tara just OK.

On a second line of posts and wire - I have the ‘Fries’. Early Fry. Late Fry. And plain old Fry. Early and Late look great. Fry is puny. I may replace it.

Here they are. Almost all have reached the end of their wire. In a couple of cases a secondary shoot became stronger and longer than the main one. So . . . I switched them and tied the secondary vine to the wire. Hope this is OK. Anyone know? @Auburn . . . Bill, what do you think? 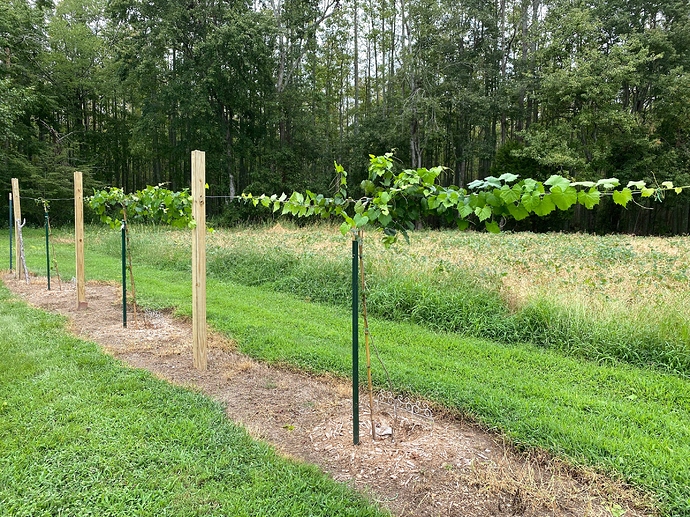 And Dixie, Darlene and Tara. Dixie is much stronger than Tara. And Darlene, in the middle, came back from being yanked out earlier this summer. I ordered replacements from Isons and will probably take out Fry and Darlene. 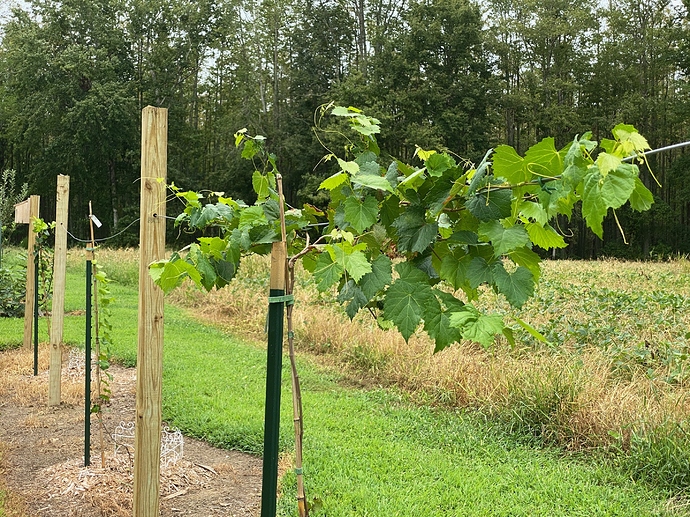 Your vines look healthy and on their way to many heavy loads of fruit going forward. The pruning methods used will speed up or slow down getting to the maximum production but overall I think getting the vines shaped like the Isons models (yours are similar) is most important for how they will perform for the next 20-60 years and on. I have switched leader vines a few times when it was apparent that one wanted to grow faster. The smaller vines toward the left if healthy have been establishing the root system and most likely they will have vigorous growth next year. This is the time of the year that I back off fertilizing young vines and let them harden off for the winter.

I like Dixie, it’s on the smaller side but sweet and tasty. Makes a good jelly or jam too.