Apple branches w/leaves only at the tips

Three of my apple trees have branches with leaves only at the tips. The buds on the rest of the branch are alive, but they don’t leaf out. There are only a few leaves at the end of the branch, and otherwise just a bare branch. What could be causing this? It has been going on for several years. Is it time to cut the trees down?

Post some photos if you can. Also, welcome to the forum.

Thanks. i’ll try to figure out how to do that.

@Nimzo … I have a 90 ft long food forest raised bed that I keep covered In deep mulch… and I have che tree peach tree 3 apple trees 1 apricot / morepark… and 2 jujube trees.

In between the trees I have goumi bushes raspberries blackberries strawberries and a few other misc herbs like dill basil etc.

Well with the exception of my moorpark apricot… and it is doing something similar to what your trees are.

Both the first and second springs…it leafed out nicely grew some… this spring I even had a few blooms… but no fruit set… but mid June after it gets hot… it drops leaves on the limbs… all but three most recent growth at the limb tips… it keeps leaves only on the tips the rest of the year.

Jujube growing next to it have grown and keep all foliage nice and healthy all year… on the other side just up the bed a little 3 apple trees and two goumi bushes are doing great.

I gave that apricot 50 lbs compost and some organic fertilizer… both springs… before bud out.

I am not sure why mine does that either. Looks like a bad sign to me… perhaps apricots just cant cut it here in my TN zone 7a. Hoping that perhaps next spring it will grow out of that.

I have not experienced that with apples.

What variety is your apple? Do you know its rootstock? My guess is that you are growing a high chill apple in your low chill area. That is why your tree has a kot of blind wood. @applenut is an expert on growing apples in low chill areas. He owns Kuffel Creek Apple Nursery in Riverside, CA.

Check this thread out.
High Chill Apple in a Low Chill Climate.

There are three trees that are exhibiting this behavior. All of them are re-grafted trees, but I wouldn’t think that would make any difference. They are all loaded with “blind wood,” have just a few leaves only at the tips of long branches and bear no or minimal fruit.

One started its life as a King David semidwarf (sorry I don’t remember the rootstock), but because the quality of the fruit was unsatisfactory and I wanted bittersweet apples for cider, I top-worked it to Medaille D’or. That’s the worst one.

The second-worst was originally a Pitmaston Pineapple dwarf. I top-worked it to a number of varieties, including Zabergau Reinette and a couple of the Albert Etter pink/red varieties.

The third was originally a Cox’s Orange Pippin dwarf. Then I top-worked it to Tydeman’s Late Orange and Freyburg.

Unlike in TNHunter’s garden, the leaves didn’t leaf out and fall off – they never showed up in the first place.

Yes, I’m aware of Kuffel Creek and Applenut. Maybe I should be growing the types of apples that work in his climate rather than English or French varieties. I live in an inland location in Northern California. It isn’t quite as hot here as it is in Riverside in Southern California, where Kuffel Creek is located, but it’s quite hot and most of the summer. Temperatures over 100 are not uncommon. Medaille D’or is exceptionally late to break dormancy, among the latest of any apple. By the time the tree leafs out in late May or June, it is already hot here.

What I’m gathering from the link you sent me is that the problem I’m experiencing is a result of trying to grow high-chill-hour apples in a low-chill location, exacerbated by apple varieties (such as Medaille D’or) that don’t break dormancy until the weather is warm.

I’m intrigued by the thought on your link that bending the branches down to a horizontal plane can help. But I think the solution is to rip out these low-chill, late-blooming varieties and re-plant others that are more low-chill friendly.

I will still post a picture if I can. 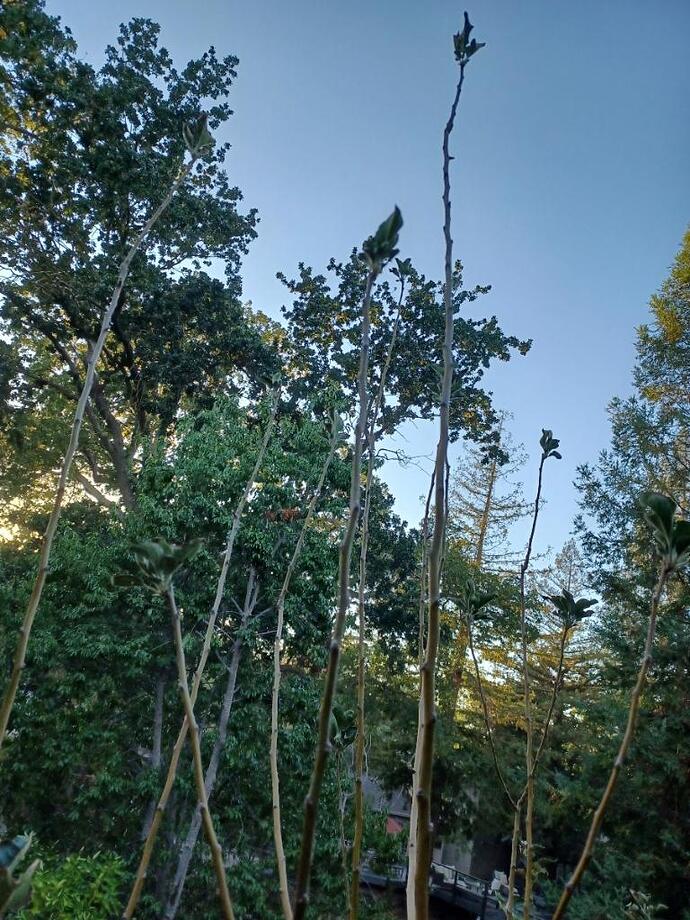 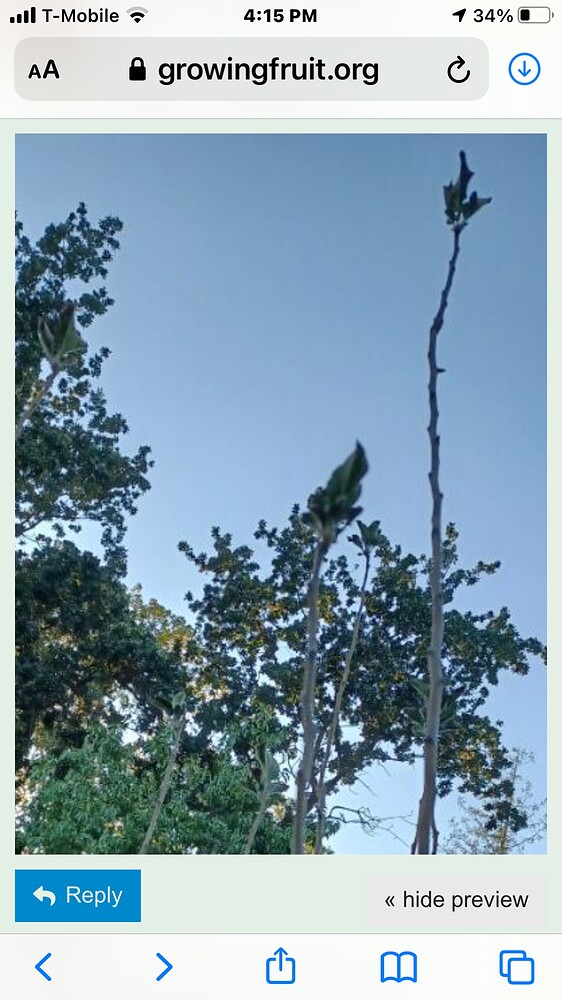 I just posted pictures of my problem trees.

Try cutting the branches down to about 3 -4 feet after the leaves drop off. Make sure to do this in the spring or winter once they are really dormant. Do this to just a few of them. See what next year brings.

Might something have eaten the leaves? Is there a deer fence around the tree?

They are in a fenced yard. Deer can’t get in. And they never leafed out in the first place.

Too bad that forum member in CA who grow apples in a low chill area have not chimed in. Maybe, you should reach out to @applenut or someone at Dave Wilson for advice.

I think you issue is about chill hours and the varieties you grow. Bending branches generally help trees divert their energy from producing growth to fruit production.