Apple (fruit only) pictures from your backyard orchards, please

It was my first successful apple graft several years back now. But, I got so many others I became more excited about. Maybe I need to try grafting it to a Frankentree for quicker chance to sample it. I think I made 3 grafts and got 2 … but one I’ve lost from neglect I guess. Just have a little B-9 about 3 feet tall.

@mrsg47 ,
My Pome Gris are smallish apples but they are even smaller this year. They have varying degree of russeting. 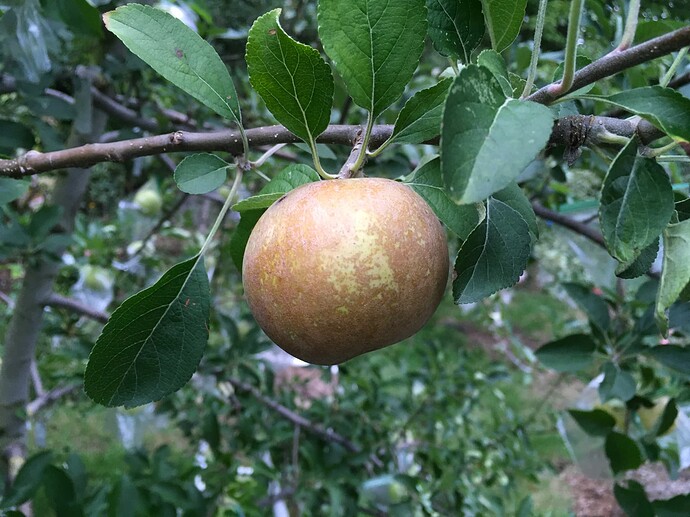 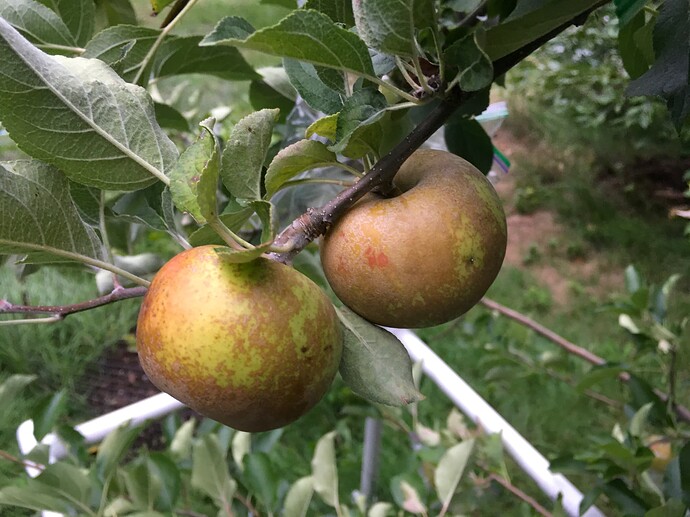 Mine usually look just like yours. I thought for sure the heat this past summer would help them russet. But. . . It didn’t! I cannot wait for my pollinator to bloom next spring, I just might get a decent crop of apples.

What is the other variety you have, please?

I’m pleasantly surprised by the flavor and texture. I forgot to look at the seeds to see if they were dark.

Also got my first Somerfeld from the same tree. It’s the only one my whole family liked. I guess it’s good that I didn’t completely replace it with the Era. Similar appeal as a good Fuji.

I picked a winfall Rubinette which was surprisingly bland.

Plus a Honeycrisp which is better than store bought, but my wife still thinks sour. My daughter likes those. Looks like I avoided bitter pit, but still had to cut around some apple maggot trails. 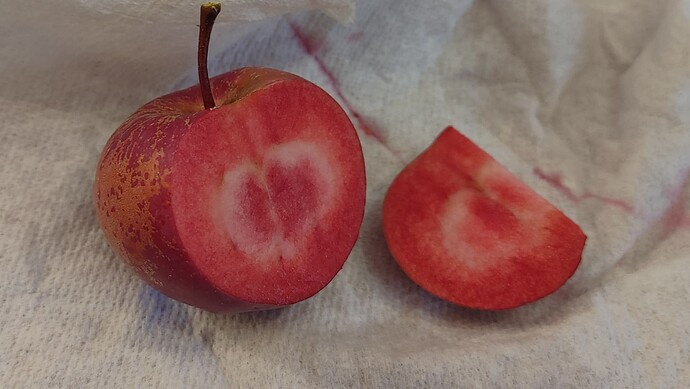 Jon-A-Red in Zone 5B near Champaign, Illinois. 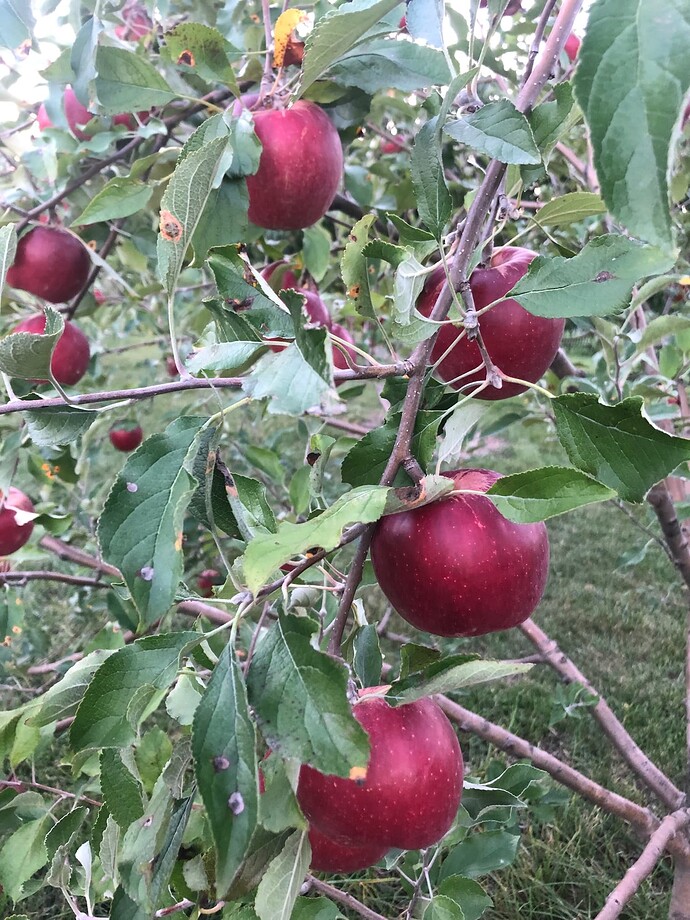 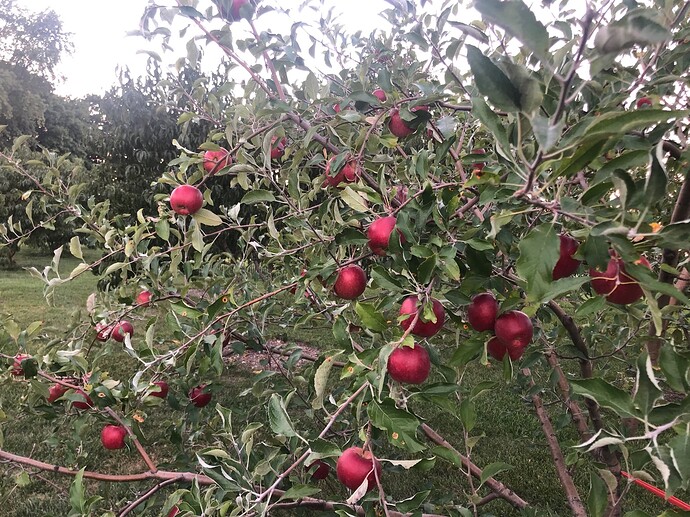 I gave that variety away to my friend. Need to get scionwood from her!!

@kxmotox247 is that a cousin of Jonathon? How do they taste. They look very pretty

Murky,
I have heard Era is on a tart side. I am not a fan of tart apple. That’s why I gave away Reine de Reinette, I think.

My Honey Crisp has more tartness in them this year than before. Many of them also dropped early before turning more colored, too. Could be the effect of this summer droughts.

They are tart with a hint of sweetness. I like them for fresh eating but they are harder to give away as most do not like how tart they are. They are a prolific pollinator which is why we bought it from Stark Brothers. Yes, it’s a beautiful tree. It looks like it’s covered in Christmas ornaments.

Yes, it is tart, and after my first bite, that struck me more. My daughter, who likes tart apples, loved it.

Part of why I was pleasantly surprised is because my expectations were low. I’ve heard Odysso is the one that is sweetest, and least tart, so had my hopes on it.

The dense, firm, crisp texture was good. The flavor was good. It was quite tart. Brix was borderline for me, but it may get sweeter if this one wasn’t fully ripe. I bet it would be good as juice or cooked in applications that add sugar.

I’m withholding judgement as a dessert apple for me, but great for my daughter. It was also quite small, so not a big commitment to eat one

I have Redlove Calypso which is also on a tart side. My best red fleshed apple is Pink Parfait, so so and balanced taste an d the texture is firm. It beats a lot of regular apples in taste, too.

By the way, I put a lot of crushed oyster shell around my Honey Crisp in late spring this year for calcium improvement in soil. So far, no bitter pit in my HC ( it was an issue until this year)

I spread some calcium too. Not sure how much it helped, only a few Honeycrisp apples this year. They are still huge, but bitter pit doesn’t seem to be a problem this year, but didn’t do anything for codling moth or apple maggot.

The best non club red flesh I’ve had is Aerlie’s Red Flesh, AKA Hidden Rose, AKA Mountain Rose. But it isn’t nearly as good as Lucy Glo.

Reine des reinettes is for cooking.

So, I don’t need to get scionwood.

Lucy Glo is not obtainable ( for growing). We don’t even have them here in our l9cal supermarkets (yet).

Lucy Glo is just an existence proof of how good they can get. The generally available varieties haven’t approached the apex of what conventionally bred red-fleshed apples can be.

I need to find Arlie Red Flesh to compare to my Pink Parfait.

Well this one is even more tart, but more sugar at 15 brix. You can see some significant water core.

It’s a bird pecked Karmijn de Sonnaville. The seeds are medium brown. I’m guessing it could use another week or two plus some storage to mellow.

Reminds me of eating those big Acerola Plus chewable vitamin C that my mother used to get us in the 70s and 80s. 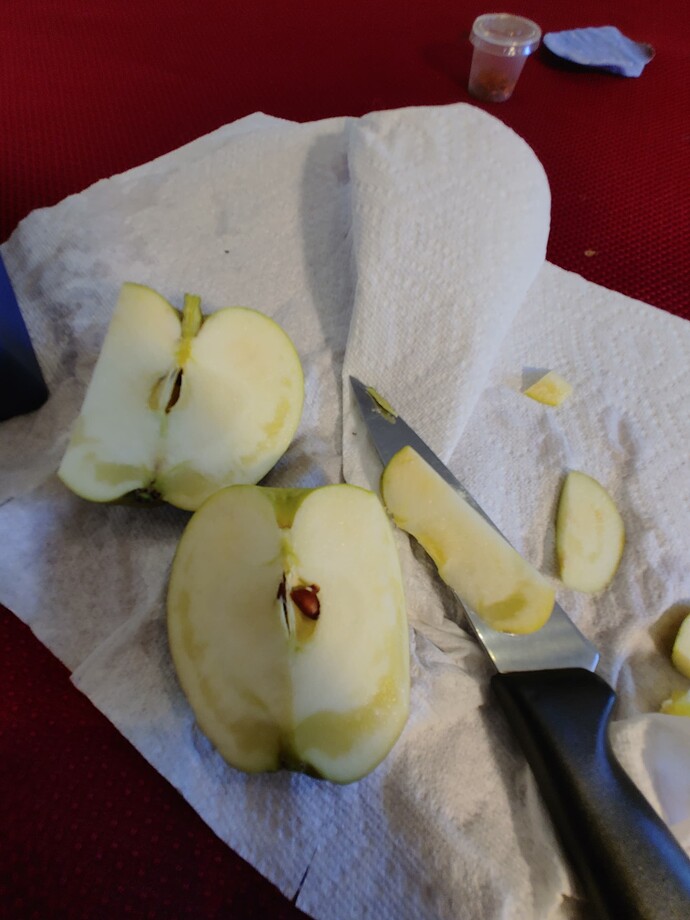 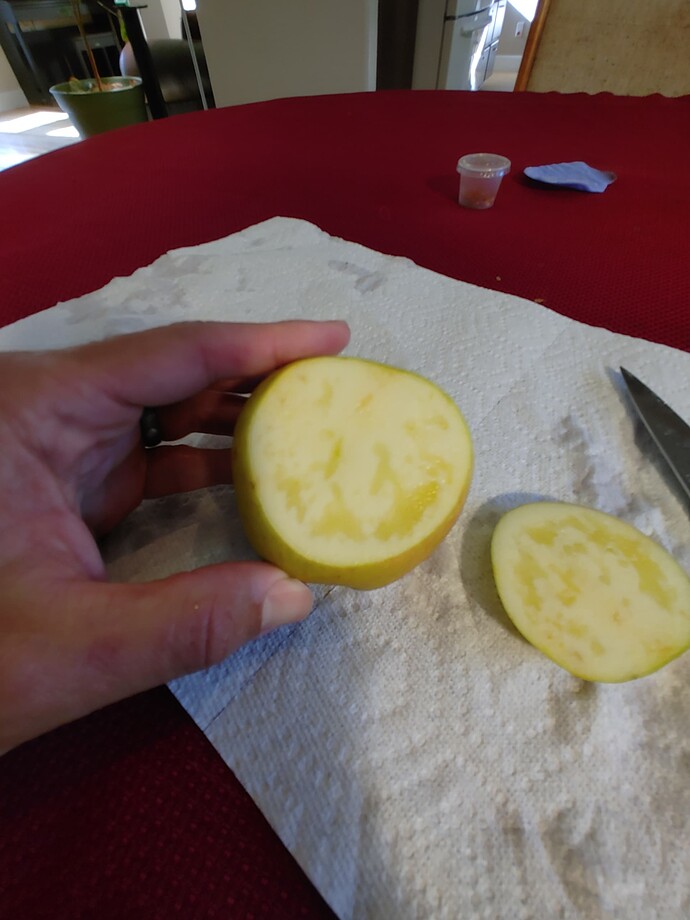 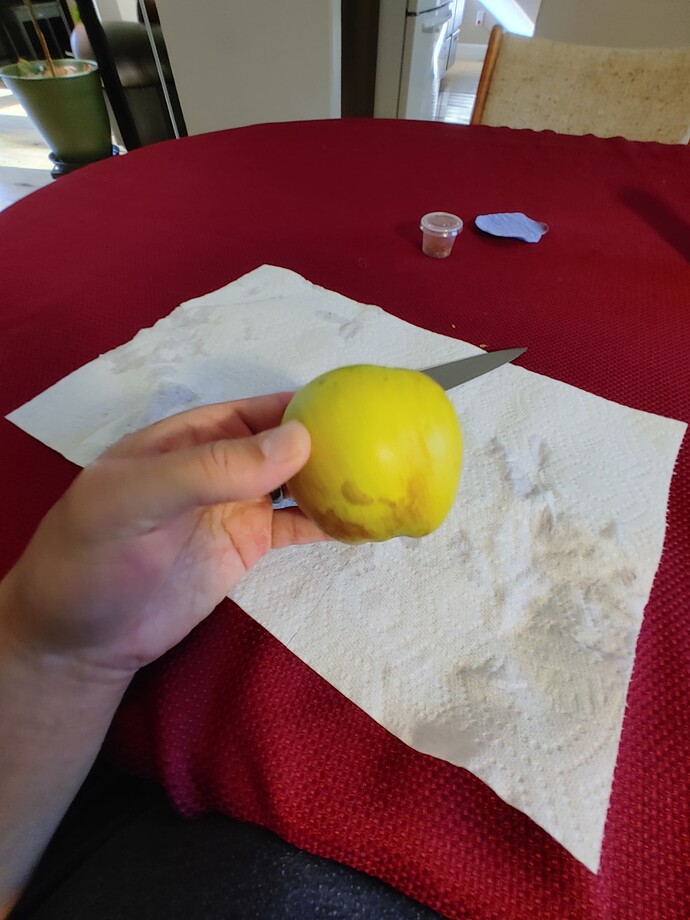 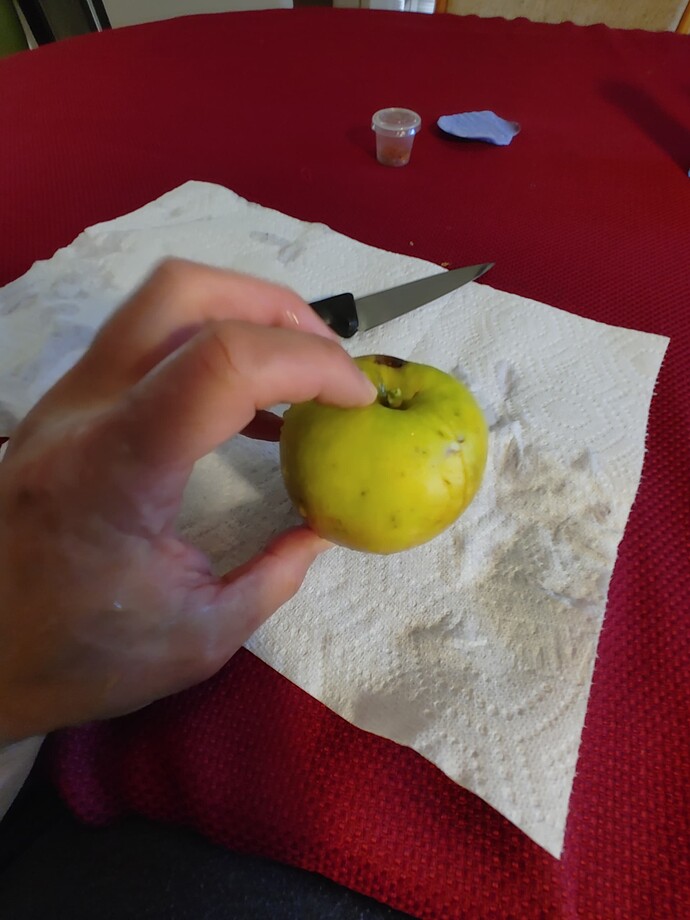 I also saw that my single Freyburg apple on a stand alone tree was rotted brown on one side. I picked it and tasted the other half. Delicious, firm, very sweet. The best I’ve had this season. I’m psyched about its future.

Freyberg is indeed unusual and tasty, though my crops of it tend to be pretty light.

I’m surprised by how yellow your Karmijns are! My are all heavily striped with red, like this: 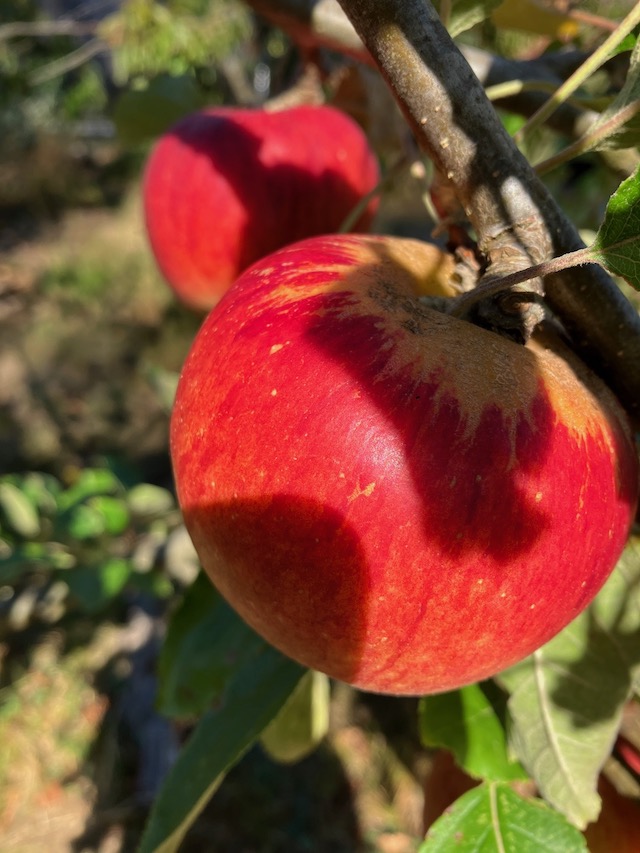 The watercore is pretty familiar, though.