I’ve been growing arctic kiwi- actinidia kolomikta for around 10 years and have gathered as many varieties as I can to trial here. I’ve found a few female cultivars that are best for fruit. They have been quite successful for me in a semi sun area of my yard, easy to grow, productive and in a couple weeks, delicious! 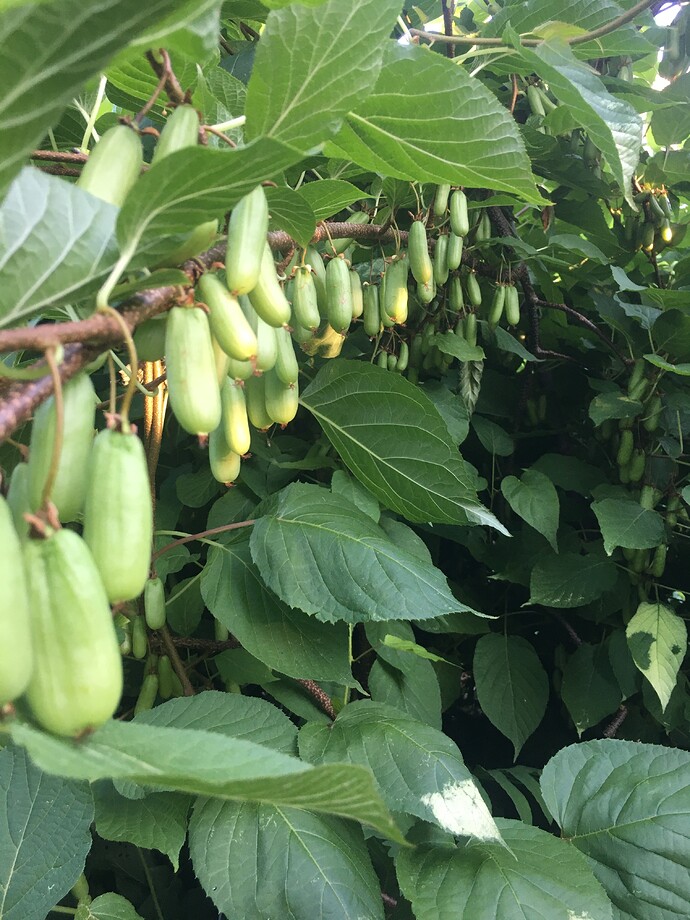 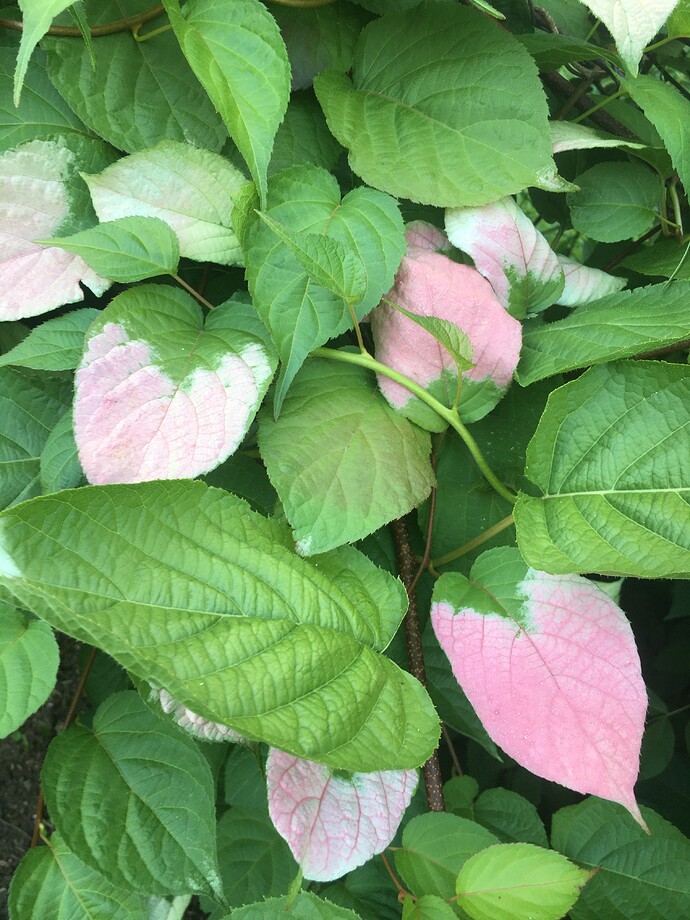 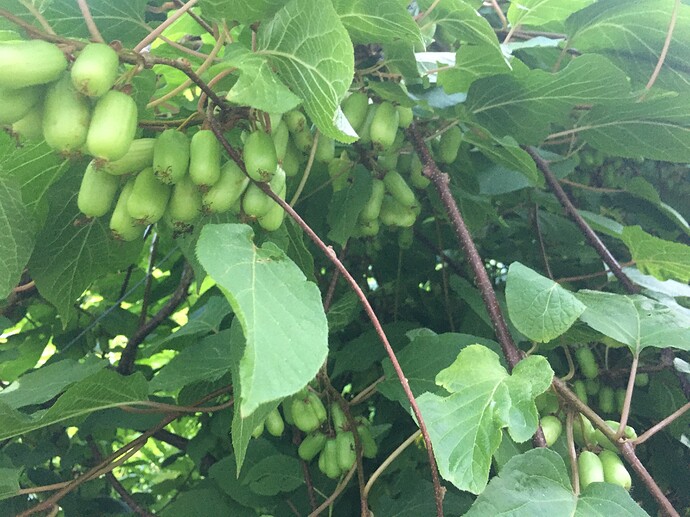 Wow, so beautiful and productive! Congratulations!

Really beautiful and productive! They are so delicious!
Unfortunately, in my yard they are doing rather poorly. They produce a handful maybe each year but grow weakly and die back substantially each winter. I think it is the heavy winter rain and subsequent root rot we get here. Two males already died but the female is still clinging on.
I wish they did better.

mine are finally starting to grow and have set a few fruit this year. they have been slow to grow and have just finally got to 7 ft. i should have tested the soil before putting them there. used to be a firepit there. whatever the issuse was, its starting to correct itself and the vines are growing finally. probably too basic. full sun till 130pm then dappled shade. just added 2 more females from your cuttings.

Jesse – Gorgeous pictures. I grew a hardy kiwi years ago (I forget the variety) slightly further north but the fruit was fairly small and the ripening was very late (like October) and all at once. Your fruit seem large and numerous. Moreover you imply that you’ll be picking in ME in late July. So I’m interested.

Can you review the varieties that you have tested, covering attributes such as fruit productivity, size, flavor, and ripening? Also do the fruits on a given vine ripen sequentially or all-at-once? Thx.

This is Arctic kiwi, not hardy. Different species!

I think I grew Actinidia arguta v Issai, which is also hardy.

Are you saying that among the “hardy” kiwi species (small “h”) there is one commonly called “Hardy kiwi” (large “H”)?

For Jesse’s benefit – I’ll grow the tastiest, early-ripening, productive, cold-hardy kiwi species. You tell me which variety of which species that would be.

Arctic kiwi is very cold hardy -40 or so. Hardy kiwi is -30 give or take.
I grow both, as well as another related species- Silvervine- a polygama here in z4b Maine. Arctic ripens in August, that’s the earliest. I harvest all at once the fruit are physiologically mature-seeds black-but fruit is firm and then let them ripen and soften on the counter or in fridge

Are you saying that among the “hardy” kiwi species (small “h”) there is one commonly called “Hardy kiwi” (large “H”)?.

Yes. Kiwi are all in Actinidia. In North America at least, Arctic kiwi typically refers only to A. kolomikta. Hardy kiwi is slightly less technical, and typically is A. arguta, although it does incorporate some other species and hybrids, but usually not A. kolomikta. It probably would be clearer to capitalize Arctic and Hardy when used in this sense, but I wouldn’t say it’s required. Here’s an article that differentiates them with examples and pictures: Hardy Kiwis for Cold Climate Gardeners - Laidback Gardener

I’m in Southern Vermont, and reluctant to start growing Hardy kiwi (A. arguta). In a few areas, one of which is within an hour drive of here, it’s turned into a bad invasive. If I do grow it, to be safe and responsible I think I’ll restrict myself to Arctic kiwi (A. kolomikta). Here’s an article on the problem in Western Massachusetts: Beat it or eat it? What should be done about the hardy kiwi?

@JesseinMaine (and others): Which varieties are you finding to be both productive and tasty? And how does the taste compare to non-Arctic varieties?

Thanks for the clarification! My favorite kolomikta (Arctic) female varieties are Krupnoplodnaya, Klara Zeitkin and Vitakola. That is based on fruit size, fruit set and year to year productivity, I find the flavor does not vary much between varieties, ripeness plays a much greater role. USDA germplasm repository carried 3 accessions under the name Krupnoplodnaya, one was male the other two female so just be aware that there are differing versions out there!

Does the flavor differ much from hardy kiwi? I just started growing an Issai Hardy kiwi.

Nice! I planted some kolomiktas here in Fairbanks around 1988. They’ve thrived but didn’t fruit until a few years ago because the males kept getting winterkilled. Finally I discovered Pasha male, which has proven hardier, and once it hit puberty I started getting fruit. The only female cultivar I’m sure of now is Dr. Szymanowski. It has the largest fruit of the ones I have, and is partially self fertile–Pasha didn’t bloom this year, but I’ve still got a few setting fruit.

How big is your kiwi bush after 30+ years?

I have a couple Arctic kiwi and they are doing really good this year. They don’t look anything like the fruit in the picture of the first post in this thread though. My fruit is the size of a small fingernail. Maybe that camera pic is just really close and zoomed in so they look larger?

I grew some “Hardy” kiwi too. They aren’t cold hardy…all mine died. I had a friend with a huge plant and his all died too. I’m only sticking with Arctic kiwi from now on.

The vines are huge now, with trunks the size of my wrist, and they cover most of the south side of the house. They die back some every winter, but are so vigorous it doesn’t matter much. They’ll easily push 5-6 feet of new growth every spring. My mystery cultivars have small fruit, but the Dr. Szymanowskis get elongated, although not quite as much as in the photos here. The male didn’t bloom this year, but a few fruits are setting. The vines also self-propagate through layering, so I can dig new plants frequently.

I’m in the Champlain Valley and my winters here are typically zone 5 , close to being zone 6. I think your caution is good. I have arguta and kolomikta, and each would happily spread. I prune heavily. 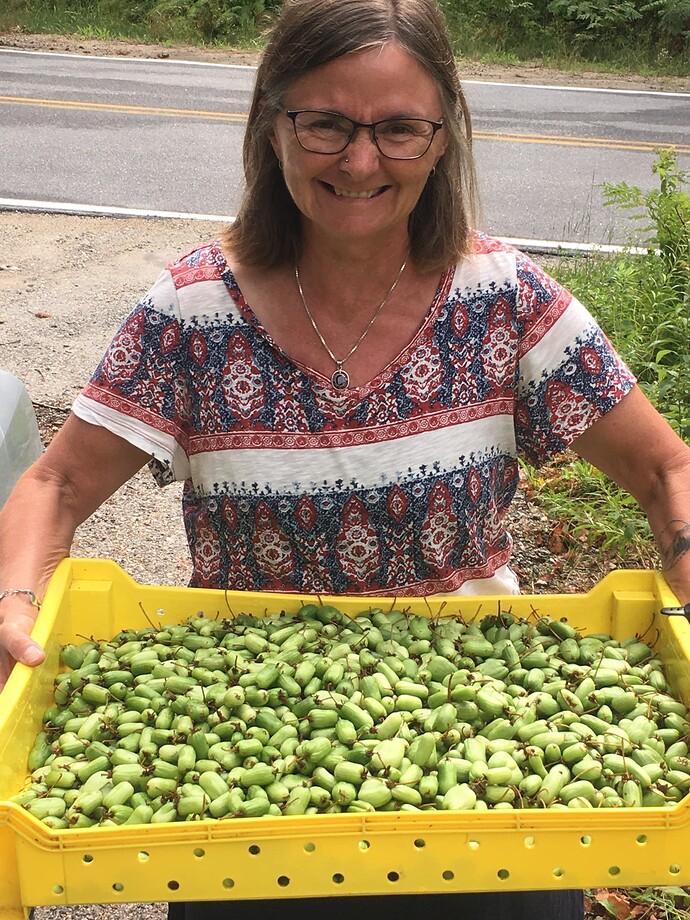 I haven’t heard the term arctic kiwi outside this forum so I did a bit if reading. While obviously a misnomer, they can be quite hardy, actinidia kolomikta being the more hardy species. The species actinidia arguta is more tender and is generally not grown as much where I live.

Both are called arctic kiwi or hardy kiwi according to wikipedia but arctic kiwi is not an official name of either one so perhaps we should go with the latin names while discussing the different varieties just for clarity.

In english actinidia kolomikta is officially called variegated-leaf hardy kiwi and actinidia arguta is called just hardy kiwi. No arctic kiwi exists to my knowledge so it has been a bit difficult to follow these discussions.

I’d love to grow them but they’re not hardy where I live, lol. Perhaps better varieties exists if they’re being grown in Alaska, but we just don’t have them.

Someone may have published that in an attempt to create a common name that satisfied them, but it clearly wasn’t adopted into common language. Probably because Actinidia kolomikta can occur both with AND without variegated foliage. Variegated foliage also occurs in some other Actinidia species. “Arctic Kiwi” may be an exaggeration, but is arguably the most common of the common names for A. kolomikta in the English language.

Would full sun and somewhat hot summers be a detriment to growing Arctic Kiwi? We’ve had a dozen or more days over 90 degrees this summer, it’s probably a trend. I know haskap and gooseberries don’t like it. I’m worried the Artic Kiwi won’t either, but the early ripening sounds awesome.