I’ve got two young apple trees that I grafted onto P.22 (super-dwarf) a couple years ago and they look ideal for espalier. I’m just not sure how to begin, the tools I might need, the form I should attempt, and the best resources (websites, books, people) for learning. One of the trees is of Ananas Reinette; the other is Brownlees’ russet. Here’s a photo of the trees I snapped yesterday: 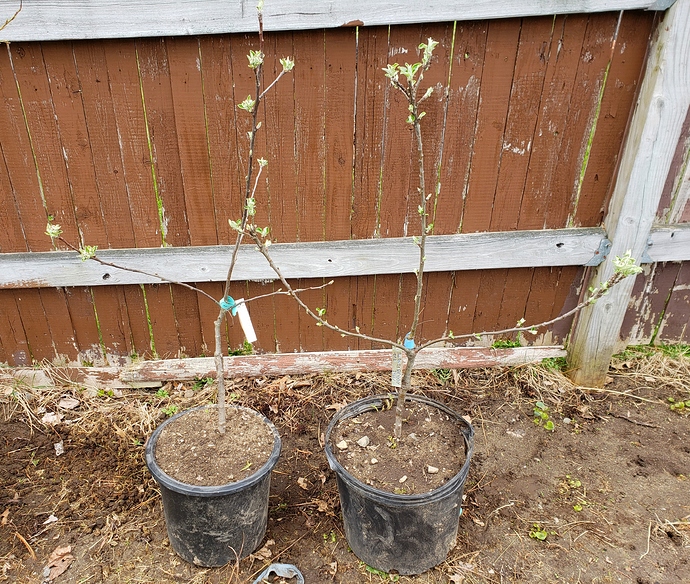 I’d like to use both trees in the same espalier. Any feedback appreciated. Thanks!

There are people here who are much more expert than I am, but I’m a few years into making a freestanding Belgian fence, or actually, a couple of Belgian fences, out of apples and pears. The apples are on G41 and the pears are on OHxF 333. (Freestanding in the sense that the trees are not being trained to an existing fence or wall.)

The trees are planted in a row, with each tree set two feet apart. The fence that is further along has twenty-five apple trees in a line running forty-eight feet. The one that’s not so far along will have another 15-20 apples and 15-20 pears arranged in a L-shape, about fifty feet on the long leg of the L and twenty feet on the short leg.

The trellises that the trees are being trained to are built from garden fence posts set eight feet apart with eight foot black locust posts sunk two feet deep at the ends (and in the L-fence, at the corner). I hung medium gauge wire on the posts and tightened it up a bit with turnbuckles, then tied a lattice of bamboo onto the wire. The bamboo criss-crosses to form a diamond pattern, and the pieces of bamboo are tied to each other at each crossing point. I got the bamboo from my dad, who grows it in his garden.

As the trees grow, I’ve been training them to the bamboo and pruning them so that each tree forms a Y. The Ys overlap, forming a diamond pattern.

It’s definitely a work in progress, but it’s been fun. Compared with some other forms of espalier, I think the pruning of the individual trees is comparatively more straightforward to manage, which is not to say that I haven’t made a hash of it at times (and different trees/varieties seem to respond quite differently to pruning). The set-up of the trellis is probably sub-optimal but seems to be working ok at this point. My sense is that training the trees to the bamboo reduces the amount of tension that you need to have on the wire, which also makes things a bit easier to manage, and visually speaking, the bamboo lattice helps to create a more unified effect while the trees are growing out. To some degree, the effect of the Belgian fence depends upon strength in numbers (in effect, you’re creating a hedge, not a specimen). Even with a smaller number of trees, though, I think it could look pretty cool. With the varieties you’re working with, it might be particularly nice to have the pink blossoms of the Brownlees Russet criss-crossing with the (I’m assuming) white of the Ananas Reinette. I’ve been trying to incorporate some trees that are reputed to have pink(ish) blossoms into my fences.

Hope you find something helpful in here, and best of luck with your project - I look forward to seeing updates in the future!

PS: Very cool to see the Brownlees Russet - I’ve been trying to track down that variety.

James,
Could you please post pics of your project? I like seeing pics as I am a visual learner. Thanks.

Sure, Mamuang. I’ll try to take some pictures tomorrow.

How much super dwarf the p.22 is? What is expected height/width?

Your trees look great for espalier. I would do it according to the picture:

You will need to build the espalier, 4 levels works for my semi-dwarf, you may find that 3 levels is fine.
Plant the trees between posts. Cut tops just above second wire, leave three buds on top. Two looking opposite directions along the wires, third will be growing up. When you have you second set of side branches about a foot long, tie them to the second wire. And so on… I used this manual : How to Grow Espalier Apple Trees - FineGardening

That’s so awesome you took the time to draw a diagram! Thanks so much. I will follow this plan. It makes good sense.

P22 produces a tree comparable to those on M27. We’ve got three trees on M27 in our front yard that are easily kept at a mature height of 4 to 5 feet (see photo below.) With three final scaffolds on these new espaliers, I’ll shoot for each being around 16" apart. 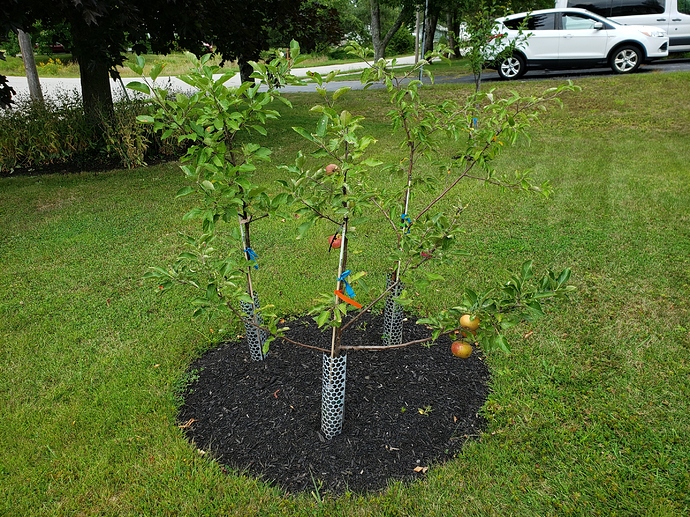 Thanks again for taking the time.

I’m intrigued with your project. That sounds pretty amazing. I’ve only seen photos of Belgian Fence espaliers, but they’ve been spectacular, nonetheless. Please post some photos of your progress!

Thanks, John. My project is definitely still in the scrappy and scraggly stage at this point, but I’m happy to send along a few pictures of the fence that’s a little further along.

The fence faces south and runs east to west. For reference, this is currently the overall arrangement:

I extended the endposts this spring and moved a few things around on the outer panels (partly bringing in trees that I grafted last year). As you can see, I still have a few spaces to fill in and will probably end up doing some more adjustments down the line, but it gives you the general idea.

Here is a view looking down the fence from east to west: 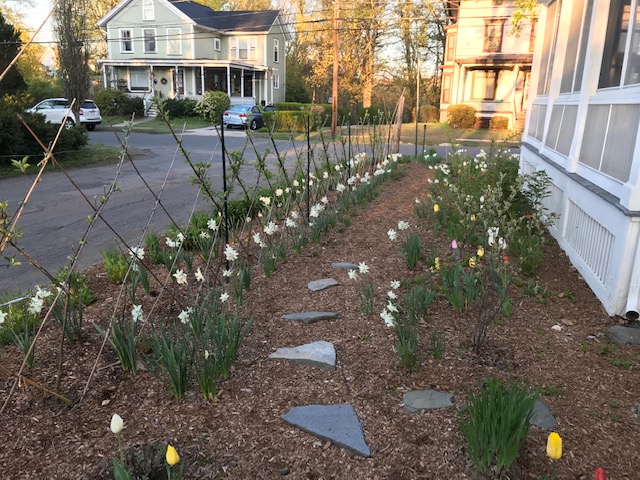 Here is a view of a panel looking toward the street: 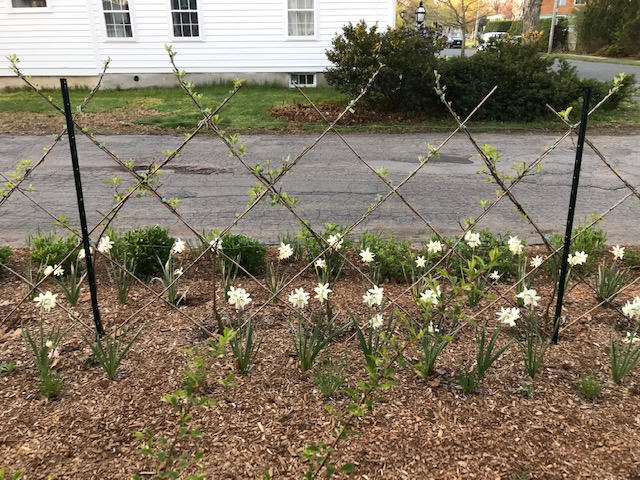 Here is a view of the same panel (I think) looking from the street: 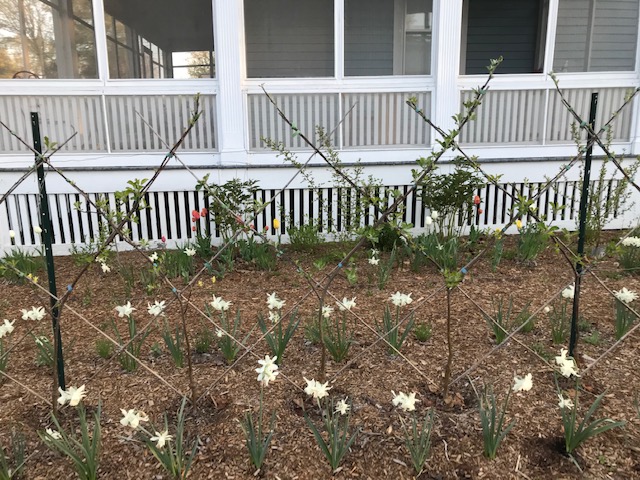 I believe that is Black Oxford-Westfield-Wheeler’s-Westfield-Black Oxford. As you can see, the diamond pattern isn’t perfect, though you don’t notice it so much in person. I’m not necessarily going for perfection, but I’ll probably tinker with it a bit this spring, and I also have to do a little work extending/replacing some of the bamboo, especially where the trees are starting to outgrow the lattice. (Wheeler’s Golden Russet and Black Oxford have been among my more vigorous trees, Wheeler’s especially.)

Here is a view of one of the black locust endposts with part of the lattice under construction: 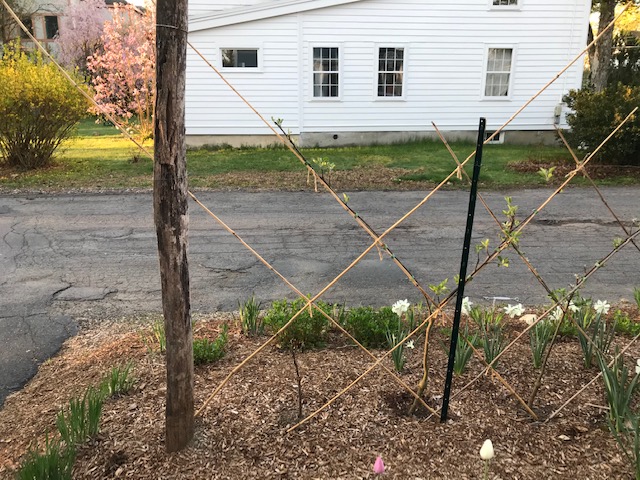 Here is a closeup that shows the bamboo tied onto the wire and the tree tied on to the bamboo: 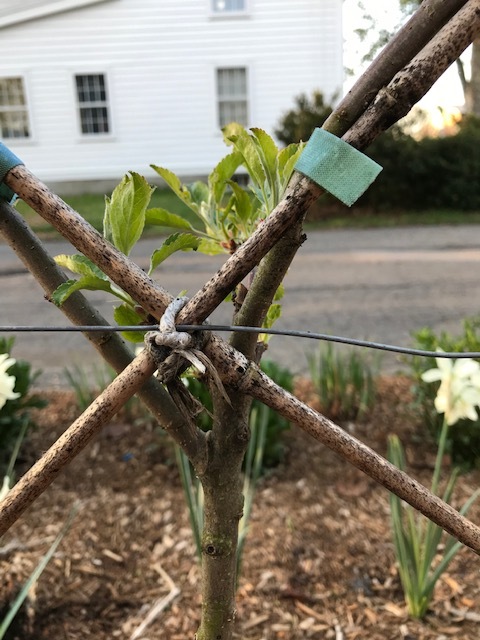 And finally, just for kicks, here is a closeup of some of our first flower buds: 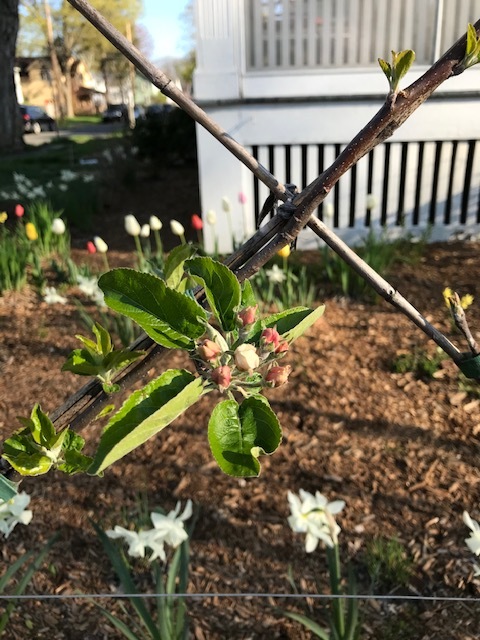 These are on Reine des Reinettes. There are also a couple on Wheeler’s and a couple more on the Blue Pearmain that’s in the fence that I’m working on in the back yard.

Very much a work in progress, but that’s what it looks like as of today. (When we moved in, the landscaping consisted of crabgrass, a Norway maple, a euonymus, and several dozen scraggly yew bushes, so all things considered I feel like we’ve taken it in a positive direction.)

Very pretty and such a space saver. Thanks for sharing.

We also have some limitations in terms of sun (you can see the big maple trees in some of the pictures), so part of the idea is that the espalier will help to maximize the sun we do get.

@JinMA - Looking great, thanks for sharing your pictures! What rootstocks are those on? I think you said in another thread but I forget…

I’m interested to see how this micro-espalier will work out on super dwarf stock. @TheCidery - please keep us up to date on your progress.

Thanks, Holly. The construction is pretty ramshackle compared to yours, but it hasn’t toppled over yet. In answer to your question, almost all of the rootstocks are G 41, with a couple of G202. I don’t think I would want them to be much more dwarfing than they are, personally, because my sense is that it helps to have a little bit more vigor than you need for espalier. I’d be interested to hear your perspective on that - your trees are a good bit further along than mine, I think.

And definitely interested to see how your project unfolds, @TheCidery.

I have two apple trees on M27. They don’t grow much and I don’t know if they will have enough energy to push growth for espalier. Please keep us posted. I train mine to delayed open center.

Yes, I’m a few years ahead of you and three out of 7 are almost filled out on their patterns. I agree that the optimal situation is slightly more vigor than you need for the space. In my case I am asking each tree to cover more area than you are in your design, so other things being equal I should have more vigorous rootstocks than you.

For my trees, I ended up with one tree with too much vigor (Sweet 16/Bramley’s/Reine de Reinettes on G30). I think eventually it can maybe settle down; I’m trying some bark scoring on the trunk this year and it at least has a few flowers.

Four of the original trees were probably too low on vigor, all of which are on G11/M111 interstem. The trees that seemed in danger of not filling out are Ashmead’s Kernel, Goldrush, and Roxbury Russett. Tydeman’s Late Orange was having trouble on the same rootstock getting past the second tier and got fireblight besides so I replaced it with a Goldrush on G222.

To try to help the other ones gain more steam, I tried planting a rootstock next to the tree and doing an inarch graft. One of these failed but the other two stuck. So now my Goldrush has an inarch of G.935 and the Ashmead’s has one of G.30. Maybe it is just the fact that they have had a few more years to grow, but I think all three of them will eventually get to the full trellis span on all tiers.

Still, seems trickier to match vigor with space for espalier compared to a non-constrained tree growing in 3 dimensions.

Oh, one other point about espalier that maybe everyone knows already: it is a natural fit for multi-graft. Easier to balance growth of one variety vs. another on the same tree by pinching, notching, vertical placement, etc.

I think the M27 will be like bonsai apple espalier. Cute.

For reference, just wanted to post some pics of my inarch rootstock experiment to try juice up an espalier undershooting the mark on vigor. I don’t know whether these have actually done anything or not, but it seemed worth a try. 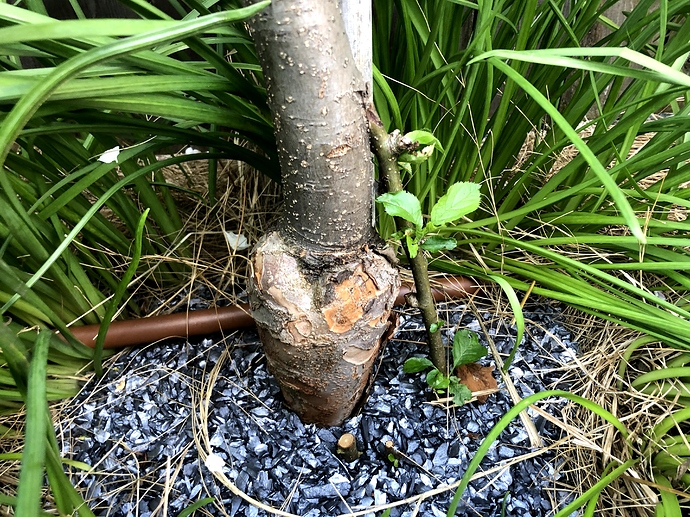 This next one is Ashmead’s Kernel on G11/M111 interstem with G30 inarch. The dead bark part on the front is the legacy of me trying to paint trunks with pure neem oil some years ago. That seems to kill G11 but not anything else it got painted on. 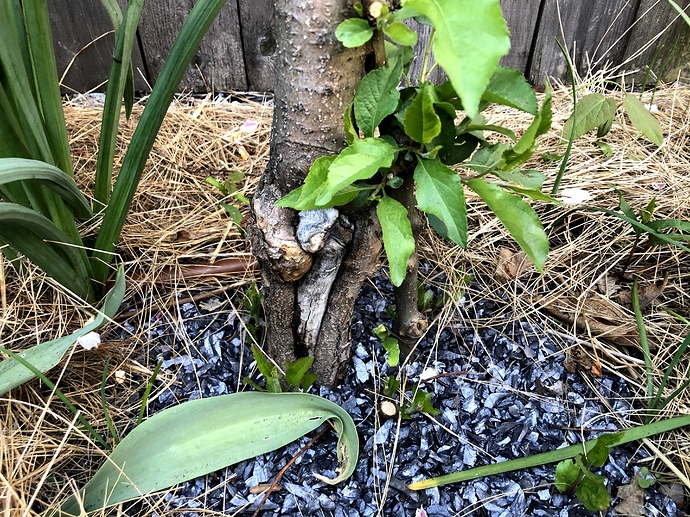