winter d has been sold out

I Highly recommend this one

Recently JFaE updated their jujube stock. Autumn Beauty is one of the varieties they are now offering. I’ve ordered two of them, with delivery next week.

Prices are quite high ($65+shipping), but from my past experience, the trees are pretty nice too.

In addition to AB, they also have So on it’s own roots (the only variety marked as such on their site). The So are $60.

Bob,
I wonder if Si on it’s own root is worth $60 + shipping. My is from Burnt Ridge at $35 a tree, bare rooted so shipping is not as expensive as potted trees.

They are in 3 gallon pots and 3-4’ tall. Much bigger than the 1 gal jujubes that OGW and Burnt Ridge send out.

I wonder if Si on it’s own root is worth $60 + shipping. My is from Burnt Ridge at $35 a tree, bare rooted so shipping is not as expensive as potted trees.

Burnt Ridge is probably the most cost-efficient way to get jujube trees. I like the JFaE trees better and So being on its own roots is a big plus in my mind. It takes suckers from being potentially useful annoyances to pure gold. What friend wouldn’t want you to donate a sucker which doesn’t take any care, produces great fruit and looks good while doing it. The main issue is that they don’t sucker enough

It comes down to how much $$ you are Ok with spending. I thought about getting 4 instead of 2, which would have meant at least 1 more So. But, I’ve already planted 3 (from JFaE), so that is probably enough for now. If they had Sihong or Mango Dong, it would have been hard to resist.

I’ve ordered from them before. Great trees. Don’t get me wrong. It just seems like $60 for one tree is a bit much. It looks like they’ve upped a bunch of their prices with their new website it.

Yes, I noticed the price increase too. I think the price of $60 for a jujube on its own roots is a good deal. But, like Bob I would rather it be SiHong or Honey Jar, etc.

Yes, I noticed the price increase too.

Honey Jar and Sugar Cane are $70. But they aren’t on their own roots. If they were, I would have definitely gotten at least one of each.

It just seems like $60 for one tree is a bit much.

It’s on the high side, but in general jujubes tend to be pretty expensive. They are $50 at Trees of Antiquity and Bay Laurel. And $48 from Sanhedrin.

I got trees from a number of nurseries this spring and I think the ones which have grown the most are from GrowOrganic. I got them $10 off from an end of the season sale. With the discount, they were $40. I’m not sure if it was something about the trees (5/8 to 3/4" caliper and good roots), or just that they don’t hold them, so they shipped them very early. I planted them the day I got them, on Feb 21st.

Forget scionwood- it was warm enough today that it felt like I should be finishing up grafting and planting the garden. Instead I’ve probably got over a month until I start grafting. 75F in Feb is pretty extreme for here. As much as I don’t want my trees to bloom too early, I really like it for me. I took a half day at work and spent it collecting scionwood and planting trees. I lucked out in my first trees arriving today- Grow Organic ships pretty early, but it worked out. 3 jujubes and …

Among the places which send smaller trees, OGW is pricey, while Burnt Ridge is comparatively reasonable. For the same 1 gal pot, OGW is $40, while BR is $28. The bare root trees from Burnt Ridge are pretty good value as well.

friend wouldn’t want you to donate a sucker which doesn’t take any care, produces great fruit and looks good while doing it. T

i agree, and thanks for the lead, am definitely buying! My chico and li airlayers seem to be duds. Our hot summer seem to inhibit rooting, not sure why… Jujus on their own roots are a must-have, and contorted would make an excellent edible ornamental. One of the few instances when we actually wish for our trees to get weedy with suckers! l( agree with @k8tpayaso though that sihong, hj, etc would be much better deals)

our seed-grown cultivar we named 'vegas booty’now has one precious little sucker. Had to dig up the three year old mother seedling from the bed of juju seedlings early this year, then combed out foreign roots(from other seedlings/trees, and planted in the tub to ensure that any subsequent suckers would be exact clones.

likely helped that i butchered the mother seedling for budwood earlier this year which encouraged suckering, even if just a singleton. One is better than none!

below is the tub of vegas booty: 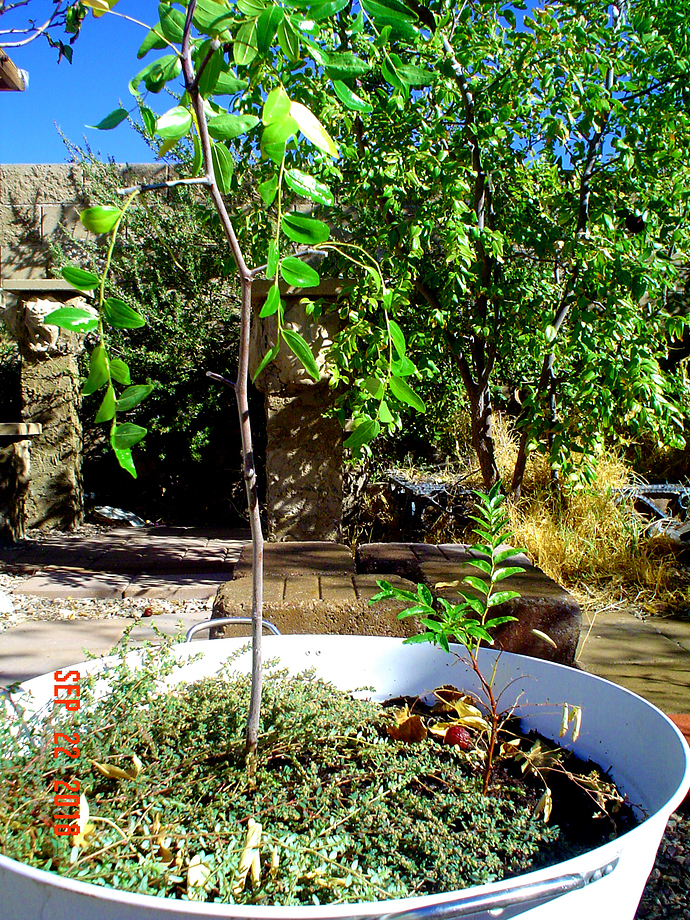 That’s a cute little sucker too!!!

I have a SiHong seedling that is a bit over a year old that has already suckered. I’ve split off the sucker to it’s own pot and it’s growing well too. I REALLY, REALLY want the fruit from these to be good. No bloom yet though.

I’ve split off the sucker to it’s own pot and it’s growing well too. I REALLY, REALLY want the fruit from these to be good.

am excited for yours too! We have ~dozen sihong seedlings as well, and none have suckered nor bloomed, but also hoping at least one would next year.

That’s a cute little sucker too!!!

and that cutie is a-bloomy! Did i tell you how i sooooo love them jujubes?

not sure if the two tiny flowers could produce fruits, but never say never. The fruits seem to have the qualities of sherwood and sihong, and seems to be much earlier than sherwood to mature, probably an early to mid. 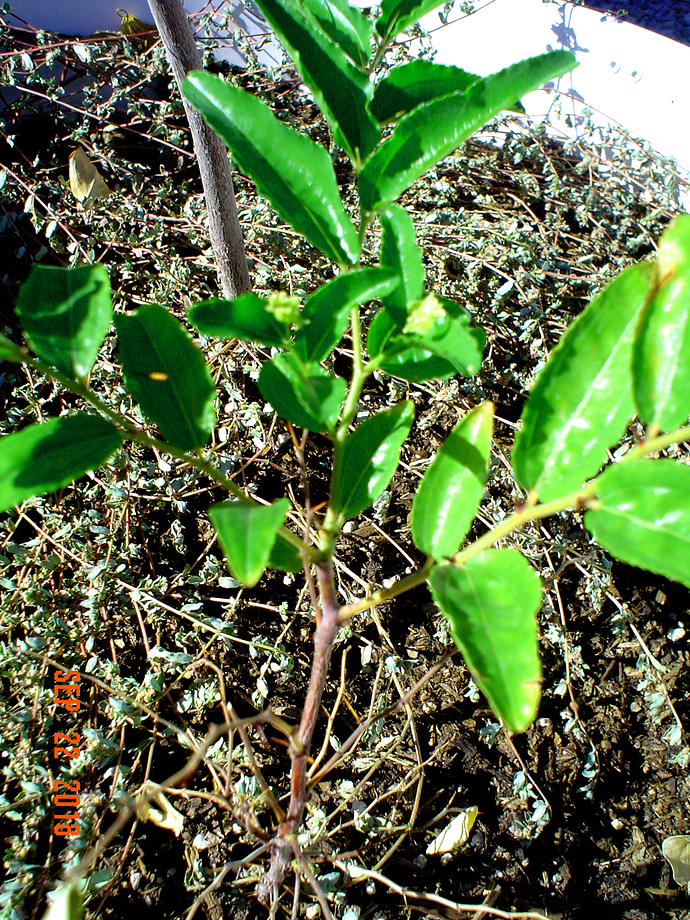 incidentally, was hoping jfae’s sherwoods were on their own roots too, but i guess that’s asking too much!

I had to take the plunge too!! They should give us group discounts…

hoping jfae’s sherwoods were on their own roots

So…off topic I guess…how long do you think it would be before I would see Sherwood fruits?

My 3 year old Sugar Cane has a few suckers next to the tree, like only 1-2” from the trunk. I don’t think I could dig them up. Should I just cut them off?

You can. Your SC is a grafted tree?? So these would be rootstock suckers that could be saved and grafted to. If you don’t have any desire to save them just cut them off at the ground. If you wanted to save them it is best to wait until dormant to dig them out. It’s harder to dig them out than I thought it would be. If your SC is a young tree it’s better to just cut them off.

as for sherwood, do you mean you have one already? Sherwood can be precocious, but not productive. Here, a 3 ft tall sherwood graft with all its laterals may produce just not much more than a lb of fruits.