Avocado browning on tips of leaves

First post here. I’m looking for some advice to get this avocado a bit healthier.

It’s been about 2-3 years now in the ground. It did look much healthier at once point but seemed to take a turn about a year ago, and has since had browning tips.

The man at the nursery said it could be because of cold spells we’ve been having.

The tree is between two apartments so it may not be getting the most sun exposure in the morning and late afternoon.

Any advice would be helpful. Thanks! 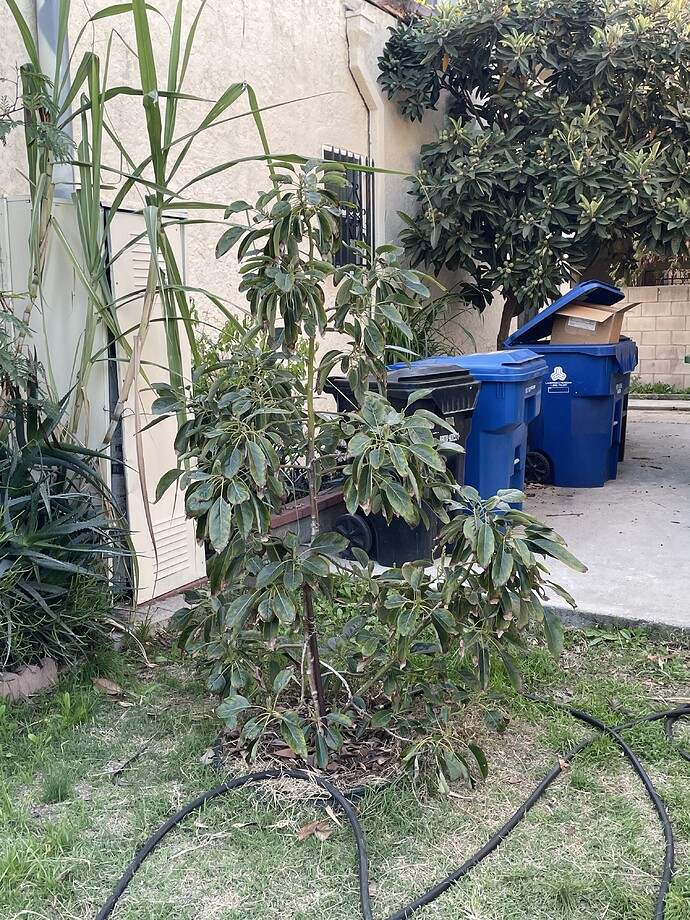 Welcome to the forum!

Have you had your soil tested for salts? How about your tap water? My first guess would be salt buildup in the leaves from some combination of salty soil and salty irrigation water. Could also be fert burn, which looks similar.

Interesting. I haven’t tested the soil salts or water — not sure how to go about that. Well I did test the soil here for NPK, it is a bit deficient as I remember, forgetting now which the most but somewhat in all.

I did fertilize with a citrus avocado fert a while back, just followed the box

but they also don’t look quite as good this year.

How frequently would you recommend watering the avo? Guy at the shop today said they can take a lot of water.

Your water utility probably publishes water quality reports annually, so look around their website as a first step. If you’re on well water, then it’s probably pretty high salinity for avocados.

If the problem is salty irrigation, then more water won’t help unless you switch water sources, like collecting rainwater and using that.

If your water is fine, then you can probably get a free or cheap soil test from your local extension office to see if your soil has high salt levels, which could be a result of soil chemistry or past fertilizer use in that location.

In that case, then Integrated Pest Management For Avocados recommends watering deeply with low salinity water, and then letting it go longer than usual between waterings to reduce the risk of root rot from overly saturated soil. I posted a photo of the relevant page on another thread with similar (albeit more severe) leaf issues:

I’d say your original theory of salt is right, and especially if that’s a seed-grown tree, rather than one grafted on a more salt-tolerant rootstock. A soil test would help resolve that question. Here’s what Integrated Pest Management For Avocados (a UC publication) has to say about managing salinity problems: [PXL_20220218_211503024~2]