Bagging fruits on the tree, for insect and disease protection

I posted this on another forum, but I think it would be more useful here. I will summarize first, then the details follow. I have not done this method. The plan is to do so this year for most of my fruits. This is a good time to think about bagging fruit, because it is best done when they are very small, preferably smaller than a dime.

Bagging fruits on the tree - for multiple types of fruits - has been shown to reduce disease and insect infestation significantly. In some other countries, such as China and Japan, bagging fruits is a tradition that goes back for generations. It was also done in France in the 19th century.

Bagging is very easy, maybe a little tedious. From what I read, it’s easy to bag a large number of fruits very quickly. Some people staple them in place, others just cut a notch in the middle of the zip-lock-type zipper and seal around the stem. I have not done it yet, so I don’t know for certain.

Most likely works better for larger fruits like apples, figs, pears (maybe). Somewhere I read that for peaches, bagging can promote rot. I might try anyway, maybe with paper bags. I also read that in China, peaches do get bagged with opaque paper, which prevents them from developing color. Cherries would be way too tedious. I don’t know about plums, or pawpaws. My plums have been free of disease, and the only pest species is the neighbor’s kids. If I do get any set on pawpaw, I want to try bagging them.

Most fruits do not get sunburned or “cook” in the bags.

Bags protect from multiple types of insects and diseases. 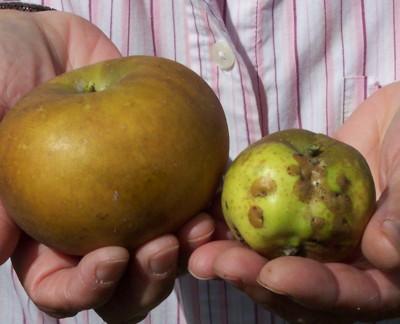 Bag apples from your home orchard trees for bigger, disease-free apples. See to how to bag, an organic pest management approach that really works!

From the Hawaii link -
“This practice first came to Hawaii with the early Japanese immigrants and in the 1920’s Oahu farmers employed school children to wrap figs.” Paging down to the section on figs, “Thought to be the first fruit wrapped in Hawaii, the practice of protecting figs from bird and insect damage was lost as itinerate labor moved on to steady jobs in the pineapple and sugar fields of the 1930’s.”

From the first 100 bagged figs, undamaged fruit = 94 and damaged = 6. Damage may have been due to rats that eat through the bags. From the unbagged figs, 86 were damaged from birds. The author could not tell if the fruit was stung by insects, because birds ate those fruits.

Having the figs in bags appeared to cause earlier ripening, as well as less bird and insect damage.

Currently I have polyethylene zipper type sandwich bags, that I prepared for this winter. With a pair of scissors and a box of generic bags, I quickly made a big pile of fruit bags. As described in the linked articles, I cut small corners off the bags, for drainage, then open the bag and cut off the flaps for short stems. From most of the articles I read, the cut corners are not a problem for insect entry. In fact, some people use bags with open bottoms.

This is how mine look. 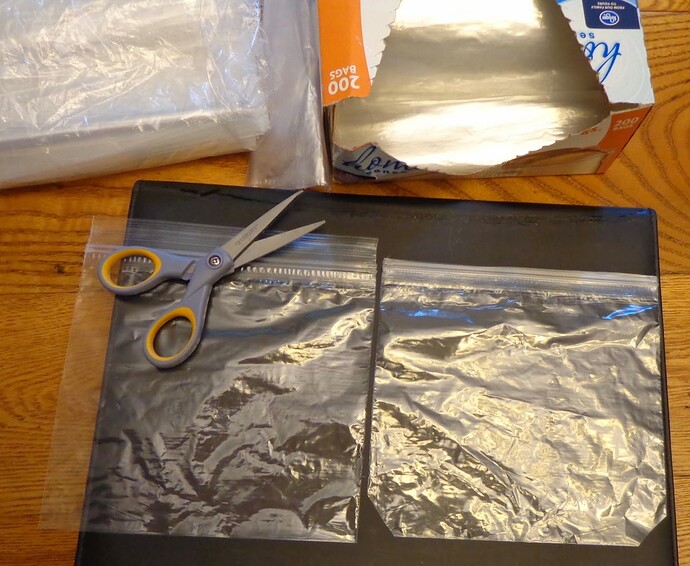 I have read about bagging fruit in the past. I find this approach very interesting. I am not an organic farmer but I have a bit of insect poisen phobia. ( my granddad had a commercial Apple orchard in Colorado in the 1950’s. He died of emphysema in his early 70’s and I was told it was due in part to the spray he used ) probably not a scientific reason but I have always had issues using poisen. I would just about try and eat around a pc grub than eat a peach with spray on it. Has any one bagged peaches? What type of bag? I have read that it makes the peaches look pale but I would be more concerned with the tast than the appearance.

I will be bagging all my figs this year, and some of my stone fruits that are first year set and not many fruits to see if I can actually be the one to eat it. I have an entire box of cloth bags that I’m going to use on my peaches and necatarines. And not a bird, squirrel or rat. I figure with bags, 6 very large bait stations, mylar tape, a plastic owl and two hawk kites, I might stand a chance this year

Thanks for sharing the video and technique, Daniel. I’ll use this on my apples, especially my Fuji’s.

I bag my blossoms on tomatoes, peppers and brambles to stop cross pollination. I think if I had a lot of fruit I would use the clay spray.

I have bagged apples for several years. My biggest problem is that about 75% of the fruitlets then abort, leaving a big mess of bags on the ground. I wonder if it is from curculios? This year I plan to spray Surround diligently from petal drop until the fruit reaches 1/4 inch size and can be bagged. And yes, bagging can be very tedious. I bagged over 2000 apples one year, but was not even around when the apples got ripe. Some friends enjoyed them, however. Northwoodswis4

My understanding is to wait til the june fruit drop or about 1/2" fruitlets. Bagging won’t help with curculio in that case. I plan to spray spectracide for curculio 2x then bag.

Bear. Thanks for starting this post. I bagged about 50 pears yesterday and was thinking that this subject needs to be debated on this forum. This will be my third season to bag fruit with excellent results that I would like to share as well as seeing how others are doing this. I will add more of my experience as soon as possible. Right now I have about 300 more pears to bag. Looking forward to seeing how everyone is doing the bagging. I’m sure we will all benefit from each other experience. Bill

PS I am almost totally organic.

Northwoods. I have the same problem with aborts but not as high amount. I was shocked last year when my pears were about 1/2-3/4" diameter to walk out and several bags were on the ground. Apparently this was my June drop as they call it. I bag my fruit as the petals are falling but I’m considering purchasing some surround so I can spread my bagging time out to a manageable level. Bill

There are 4 kinds of bags I’ve seen people on the old GW have used; the plastic zip locked bags like Bear showed, the nylon footsies/sox, and organza bags and surgical hair net.

Plastic zip locked bags: often used for apples, and pears. I found they work very well with Shiro plums of mine, too. I don’t bags pears for their tough skin and fast growing fruit helps save themselves from damages from coddling moths and Oriental fruit moths. I only bag apples.

Footsies: there are white ones and Surrounded-soaked ones (brown). They are used for apples and peaches. I use them for peaches. I have mixed result re. CM and OFM laying eggs through the sox. Surround-soaked has better results. Timing when to put the sox on is critical. One year I waited to long, lot of damages.

Organza bags: Scott uses it for grapes. Don’t know if they could be good for peaches or not. They may have too big of a hole to do the job.

Surgical hairnet: Tony uses it for his fruit like plums. It’s expandable to cover the whole bunch of them. Tony can chime in on his technique.

I am all for no spray but after bagging hundreds of them, it’s tedious, tiresome and pure pain. Footsies are harder to tie. Zip lock bags are easier to install but pain, nonetheless.

June fruit drop is a concern like North mentioned. I’ve found that with thinning early when fruitlets are tiny, I do not suffer as much fruit drops, may be 10-20%. You can’t wait after June to bag, CM and OFM attack your fruits far sooner than that.

My new strategy is to spray with Surround and Surround mixed with Spinosad. Believe me, after hundreds of bagging, you will long for spray, almost any spray, at that moment.

Mamuang. My aborts are in line with yours. I most likely will add surround next season for my pears. In my location PC nips at the small pears but tends to not bother them as they grow. CM damage has been minimal for our pears but love the apples. With using surround in the spring a couple of times I might be able to avoid bagging the pears. Bill

Auburn, I started using Surround last year. I believe Scott suggested not to add sticker for to it for could stick too well on fruit skin. I sprayed a few times.

One needs to get used to the look of Surround on skin of peaches. I have to tell people I gave peaches to that it was were clay, not diseases.

Will bagging help against Crows?I have a young Asian Pear that most likely,they went after last year when the fruit was about 1/4 of full size.Or maybe a net should be put over the whole tree,being still fairly small and not too difficult to do. Thanks,Brady

I bag many of my fruits, grapes, asian pear，peach , cherry, and strawberries. Trying to prevent birds, squirrels, raccoons from stealing my fruits. Only a little success on the Asian pears. The rest, fruits gone with the bags 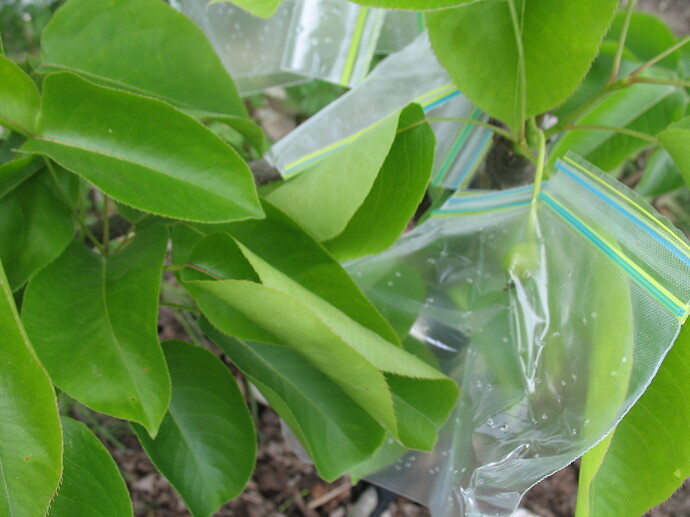 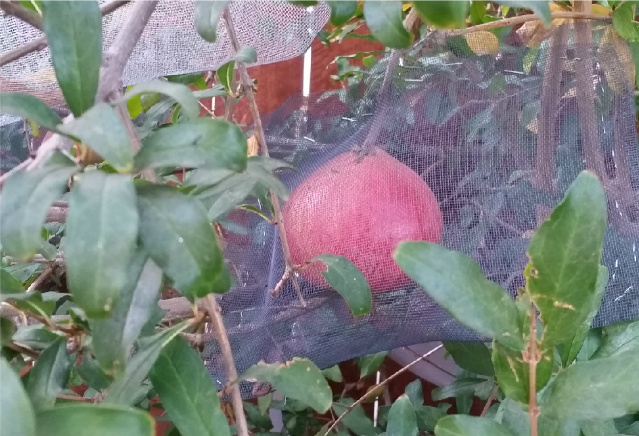 Thanks MrClint,a screen pouch may work for the Pears. Brady

For your pear, I vote for netting the whole tree. Bagging is tedious esp. if you have a lot of fruit. Each of my A.pear tree bears hundreds and hundreds of fruit. I thin them down to about a hundred.

Clint, how to you get the screen off? Looks like they are stapled on. Do you have to pry the staples off when the fruit is ripe?

Hi folks, I started a new thread because the original intent of this thread was to use plastic bags.

Thanks mamuang,I could probably net the tree or bag at this point,because of the total size and if the tree gets a dozen fruits,that might be too much.I’m going to get some woven netting anyway,for other plants,so probably will do that. Brady
Here’s a photo: 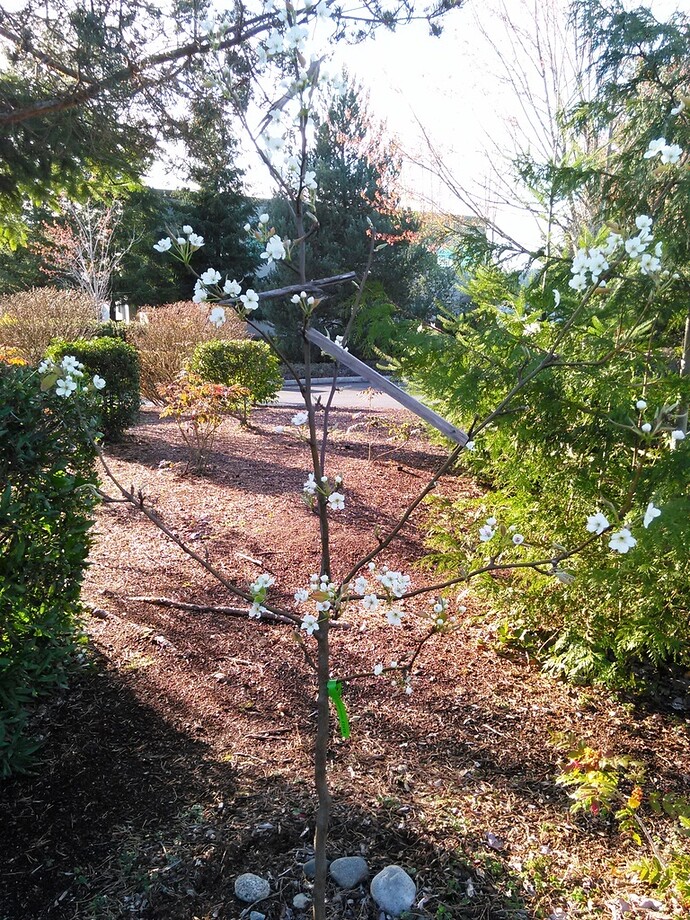