Bare root in leaf during shipping

Has anyone received a bare root tree in leaf? I just received my Arboreum order and both the trees (a 3rd went out of stock) are nice, aside from having lots of leaves. It must have already been pretty well out of dormancy when shipped, or exposed to very warm temps on the way.

I’ll get it planted tomorrow morning, but what are my chance they (a Carmen peach and a Mariposa plum) will make it? 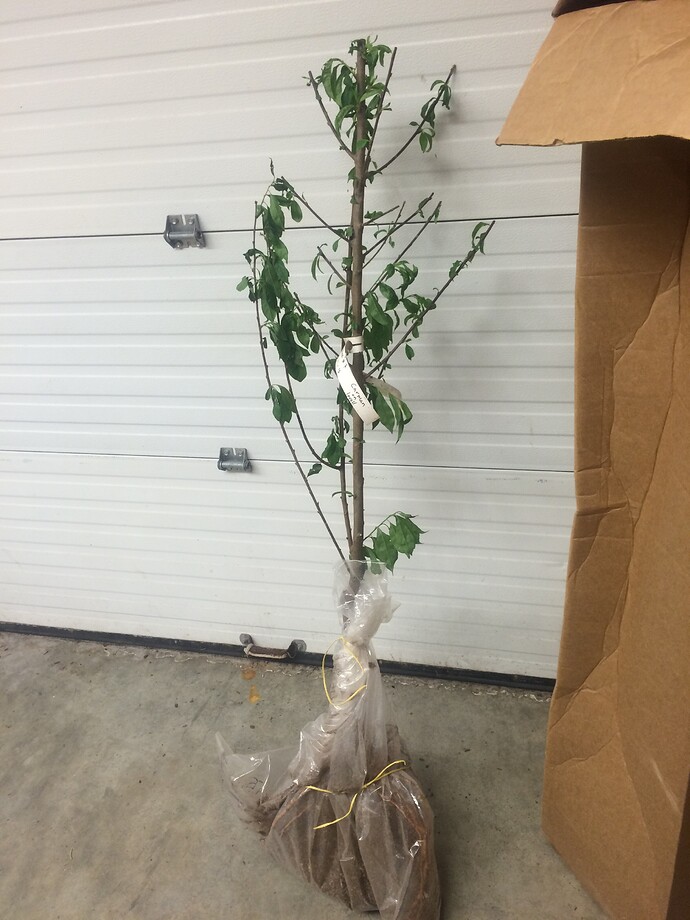 I’d be very unhappy about that, but I think they’ll survive. I sure hope so Bob.

I’d have no worries at all. For heaven’s sake it’s April!

The tree will be OK but if the sun is too intense then you may want to shade it a little bit. I got one like that several years back and it grew fine.

I have had mixed results with such trees. Fortunately Arboreum has high quality trees, if there is enough vigor in the tree itself you can get over the hump. I would prune out most of the limbs to give it a few spots to focus on.

The leaves are green so it was in leaf when shipped. I agree with pruning back as hard as possible to remove most of the leaves and concentrate growth.

I get a lot of tropical fruit trees in bare root which of course have leaves. They are a struggle for the first month or so while the roots are recovering. I pot them all up and cover with a clear plastic bag and put them in full shade. I would bet you will lose all of those leaves since you obviously can’t cover the tree in the ground. I think everyone else is right. Prune the unwanted branches and I would maybe even pluck off most of the leaves. It does look like there are still some dormant buds in your picture so that should help.

I’ll also just pot it up first and keep it in shade. The growth cycle has been broken and the tree will likely struggle to start.

Seems like it may be pretty large to cover but if you are able to pot it up, cover, and keep in the shade, I doubt you will lose many leaves. Easiest thing is probably to just prune it back hard though.

See if you can get Arboreum to send directions in e-mail. If you follow their directions and it dies, then is their fault. They sent it that way.

I’d plant it as is. If it can’t utilize the leaves, it will drop them. If there is branch or twig die back, you’ll know which to prune later on.

I had this happen and MSU told me to plant them, . And it was March and we had freezing temps. I could see flower buds opening! I pruned hard, the trees went into dormancy again. They were fine and came out of dormancy at the right time. That was way worse than this case. It’s nice out!

This year was the first year I overwintered some plants in the garage it was warmer in there and they broke bud too early! Yikes! Next year I’ll roll them outside when it starts getting warm in the garage. The idea is only to protect against severe cold. Anyway I put them out, and the blueberries didn’t like it and had some dieback. The trees were fine, they just kinda stopped where they were, and have since resumed. I cut the blueberries hard, and they are now budding out fine. Not exactly the same problem here, but I doubt planting it will kill the tree.

Happened to me. The trees pulled through, and in fact became very good trees, but it was touch and go there for awhile. The stock was exceptional, otherwise.

It’s something for us cold zone people to take into account.

Thanks all. I planted them this morning, then pruned off the ends of a few long branches, leaving mostly dormant buds at the ends. I should have emailed them earlier, as I planted my first trees of the spring almost a month ago. I had assumed they would just send them, but it looks like they were waiting for me to give the word that I was ready.

The roots on these were very nice. I actually dug big enough holes this time, as it would be a crime to root prune them at this point and I need any edge I can get. 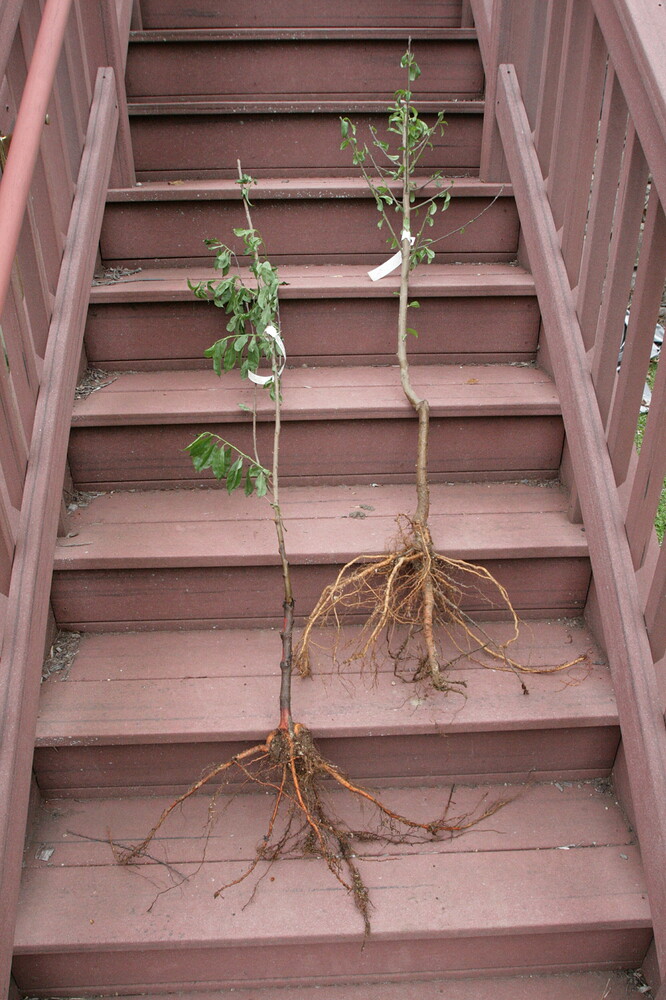 They do have some really fantastic roots.

@BobVance how are your trees doing? I received a few in similar condition a few wks ago and after soaking in water for a few hours, I potted them up. The nectarcot has lost all leaves (dried up) they are still trying to recover.

Last wk I could not resist buying a few more on sale and they have leafed out too! Soaked them in water with some Superthrive and they perked up. If I pot them up I know they would wilt since there are no feeder roots for water intake faster than it looses water through transpiration.

I want to keep them in water longer, but this too would kill them since they would be deprived of O2 so I decided to try oxgenate/aerate the water like they do in hydrophonics by using my nebulizer compressor pump. I think I would change the water in a few days. I wonder how long I can keep them in this state? . Until I see some new feeder roots would be good and if it would help with transplant shock? 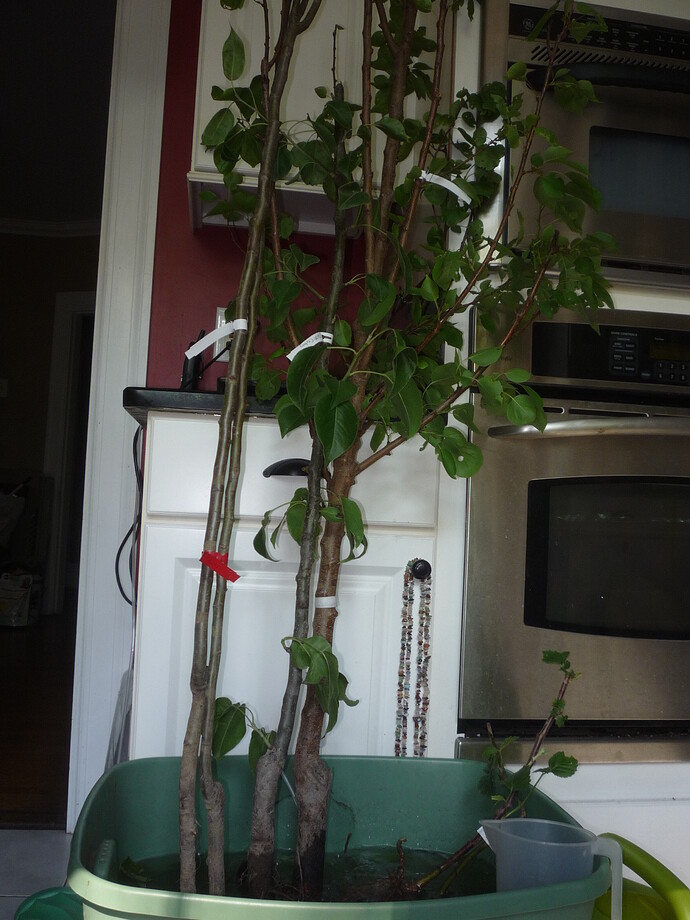 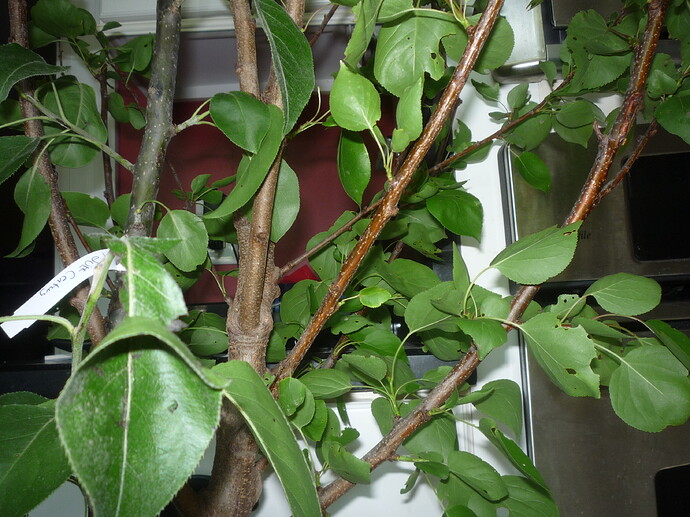 Very interesting, its surprising how well they are doing. I don’t know what you should do, but whatever it is you want to avoid any sudden change if you can. Add soil from the planting location bit by bit, slowly harden off, keep out of direct sun for a few weeks after planting, etc.

@BobVance how are your trees doing?

Mine are still hanging in there. They have the same leaves, which are a bit droopy, but haven’t crisped or fallen off. No new growth though. A couple times a week I give them some supplemental water, as it hasn’t rained much around here.

At this point in the year (temps into the 80’s for us), I’d say potting it up in a cool mostly shaded place would be best.

@BobVance, sounds like yours are doing better than mine. Maybe water in some Superthrive for transplant shock? (the ones I got few wks back.) the combo fruit salad and nectarcot and plum are touch and go. Almost devoid of leaves (btw, I saw some of your stone fruit trees Greennnnnnnnnnn with envy!!!) . Combo cherries perking up. Combo pears and apple not perking up but doing reasonably well. Hence my hesitation to plant the 2 that I have and keeping them in “hydroponic” the seckel have not come out of dormancy. I am going to get them planted tomorrow.

@scottfsmith I am not sure how they are going to work out or how I am going to do to avoid sudden change. Going to keep them in hydroponic for a few more days and see how they do.At the moment, they are in a rubbermaid tub in the kitchen (shade)

It really is a tough spring it seems in the Mid-Atlantic for getting trees like that going. I don’t know about your weather, but here,like at Bob’s place it has been hot and dry. It was in the 90’s the other day and up in to the 80’s every day since.
I think giving some supplemental water is a good idea.

Having said that about the weather, at least we haven’t had any late frosts and it’s not looking likely either…knock on wood.