The most vigorous grafts for me are unquestionably side grafts. I think the reason could be that the scion makes a lot of cambium contact to a larger thicker part of the tree that probably has more energy flowing through it. And the wound is minimal in comparison to a bark graft. I’ve not had nearly as much success with bark grafts. They seem simple and easy but I’ve had several take but not thrive and later follow by dieback of the stump. With a side graft you are adding a scaffold anywhere on the trunk that you want without making a major pruning cut so very little trauma. The only downside is that they sometime form narrow angles. But strength hasn’t been a problem for me. Some of my side grafts are hard to distinguish from actually scaffolds.

I’m not sure I know just how to do a side graft, but I recall you talking about it before. Do you have a favorite description, or maybe a link or video?

Here is a thread I shared a while back. Watch the video in the first post. Around the 3:00 mark in the video he demonstrates a side graft.

This is a concept I really don’t see or hear anyone talk about. Obviously there must be significant downsides to this technique and I’m guessing one of them would be structural strength. In theory it seems this would allow you to put a scaffold anywhere you’d like one but how vigorous would this graft be if the tree was not cut back or topped above the side graft? The linked video shows a man using a side graft on a cherry tree at the 3:05 mark. It appears he cuts a vertical slit in the trun…

That’s an excellent thread- thanks for linking it.

Has anyone experienced their grafts breaking dormancy while the rest of the tree is still dormant?

Can any of you explain any advantage of complicating beyond a splice for spring grafts?

I like it because it’s self seating: meaning if I bang it, bump it, nudge it, or are otherwise misaligned, it just grows crooked or I only have to shove it down and it doesn’t fail. I also, as others have said, use it for top working trunks.

I have had good enough luck with apples with cleft grafts to not bother with anything else. Splice is probably equally easy but I honestly find wrapping field grafts kind of a hassle so I think cleft is easier to hold and wrap at the same time.

One reason splice is easy for me is that I usually have a wide range of diameters with scion wood I use. when you have a close match, any danger of pulling off line while taping is minimized. However, I’ve had lousy success with persimmons and probably need to use bark grafts or something else for more difficult species than pomes and prunus (I also do OK with paw paws and mulberries are no problem). The only success I’ve had with persimmons have been on root suckers, once on one that had grown that spring and grafted in June.

That’s an excellent thread- thanks for linking it.

No problem. Did you watch the other video I posted near the end of the thread where a guy demonstrates a really interesting modified side graft with 2 tongues? That one is very intriguing and looks super secure. I am going to try that the next time I need to cleft graft

I watched that vid and admired Mariani’s skill. He’s obviously been doing it for a long time. (For me, it’s too soon old, too late wise!)

There are a bunch of grafts I’ve left out completely. It’d be nice to see those described.

You are an experienced young man! Thanks for the endorsement. 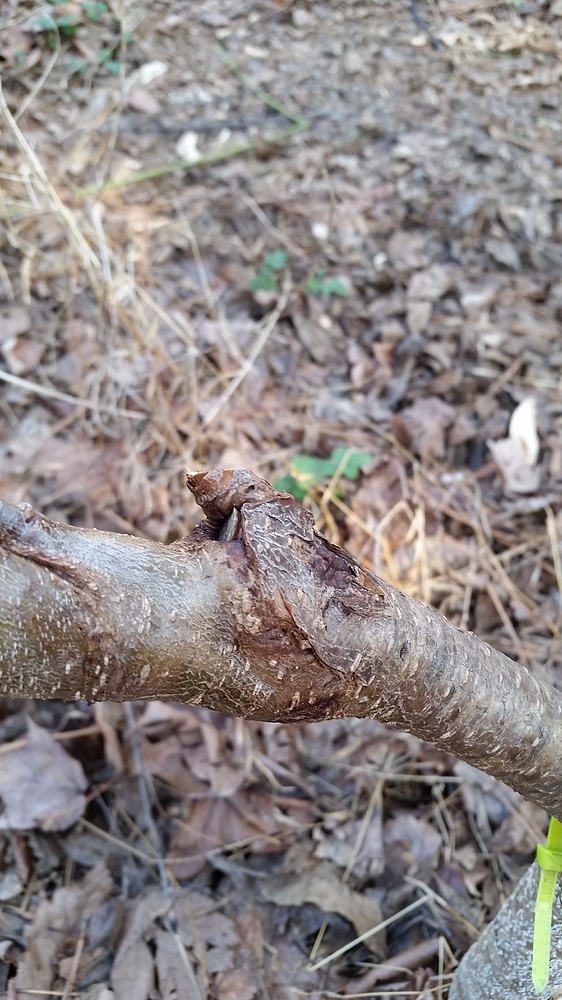 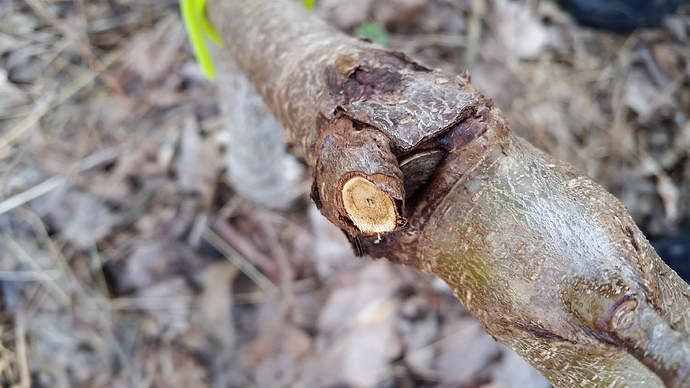 Impressive! Is that a bark graft then?

Yep, Konrads. Notice that if you look closely, it’s actually reached entirely around the top of the tree to the backup graft that has been trimmed. 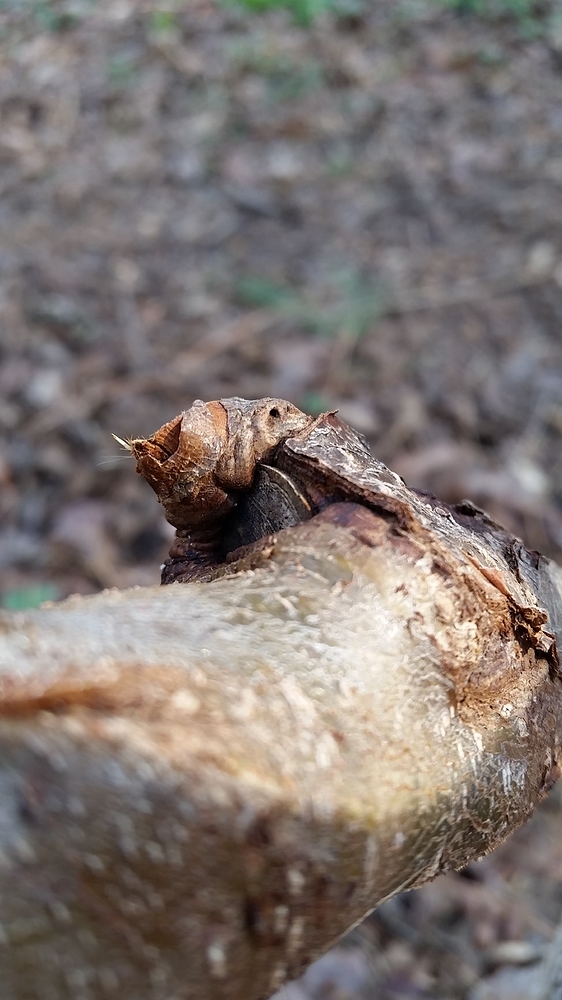 T bud has worked very well for me on persimmons.

I couldn’t think what kind of cut to make on such tiny diameter wood, and my knife skills are sub par so I was stymied.

What I did was just shave off the top most layer of bark, leaving the green part exposed. on both scion and branch.

Then, I just tied them together as tightly as possible so I knew I had the green parts flush against each other (note, I did not cut either of them flat, but left them rounded. This meant I didn’t have to match up tiny portions of the cambium- the entire length was cambium, so I just mushed them together, wrapped and tied tightly, and hoped for the best.

The graft took. The jury is still out on long term how this will grow, but it just proved to me that fancy knife work aside, what really matter is getting the green parts as much contact as possible.

Has anyone experienced their grafts breaking dormancy while the rest of the tree is still dormant?

I have some really late to leaf out apples and when I added grafts to them I saw this. But, not very often. Now I usually graft after the trees have already broken dormancy so no chance then.

Grafting is not complicated when you learn a few basics of what your doing. Great job. You probably already know this but be careful when it is time to remove the strings.

Doing some pruning today and took a picture of Satsuma side grafted to Emerald Beaut. It had tremendous growth and will certainly produce some fruits barring a freeze out. If you are wondering about the status that is toilet ring wax that I put on the crotch at the time of grafting. 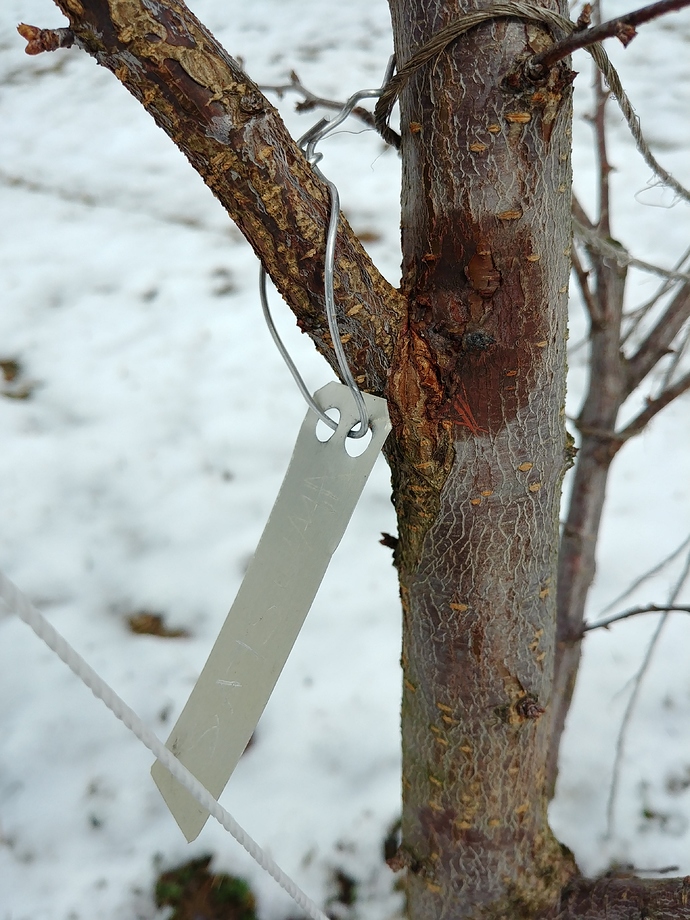 If you are wondering about the status that is toilet ring wax that I put on the crotch at the time of grafting.

I have a few grafts with the toilet bowl wax that looks just like yours. Initially I was concerned with what appears to be a little migration of the wax but as of now I have not noticed any problems with it. Just wondering if the wax is eventually expelled from the tree.