I use the CD in the field as well. (or a piece of cardboard if the CD is too small)

field grafting. The fact so many have done it and lived to tell the story is encouraging.

Ramv, I don’t see why you couldn’t make your own shield like a CD but with a larger hole if need be. One could file out the inside of CD to make it larger, too. You’re right- the CD ought to work outside too. Thanks for making the point.

Trust me Jim- if I can do it anybody can!

Whenever I make bark grafts I usually take my knife and shave about a 2 mm wide strip down the back of the scion to expose green cambium so that now you have:

Who knows if this increases my take rate? I don’t… It makes me feel better though. Now I have 3 points of contact on the scion cambium.

I use a roll of electrical tape to shield my hand while splitting rootstocks for clefts. It absorbs the shock of the blade and you can set it to the depth of the slice you want and still keep your fingers a respectable distance from the blade after cut has been made.

I keep a pair of butchers’ gloves around the house and often use one when making risky cuts.

When first seeing Konrad’s method on GW and I’m still wondering,because the photo isn’t real clear.Does he stuff the scion underneath the stock’s bark? Brady

I hope I’ve understood what you are asking correctly. In the below photo, on the left, use a knife to cut a line following the yellow mark down the branch. You can see in the photo on the right, an outline of the flap you just created. You are sliding down inside the flap you just created, making as snug of a fit as you can. Similar to sliding a bud into a T cut. 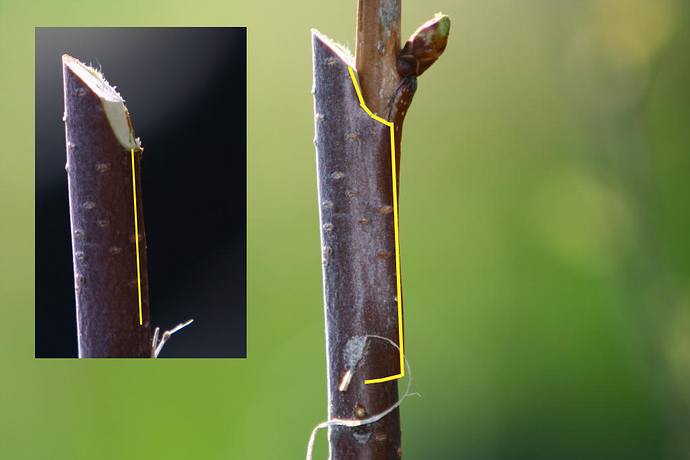 For me it looks like he cuts a line right down the middle of that “nub” cut.

On the scion after he has completed the angle and long cut, he exposes the cambium on the sides of the scion where there currently still is bark. You do that by allowing the knife to do the work and it will shave off the bark in such a thin strip that it’s less than “paper thin.”

Then the scion is inserted.

What you would furthermore look at carefully is how much more contact could potentially be made by shaving off more bark as you round the scion over (slicing more thin bark layers) on the side with the bark. So when you fold it all together you achieve maximum contact with the “winged” flaps of the rootstock.

It’s definitely a different method of bark grafting. Because… you’ve unfolded the insert area like opening up a book. That’s my reference to “wings.” Then when you close the book, you want the scion to have as much contact as possible “with the pages on each side…”

Oh yes, also on the back side you do make a 1/4" or whatever cut at the tip. And that is inserted under the bark.

It should be assumed the long cut on the scion is completed and turned over and a 1/4" or 1/2" “wedge cut” is completed. Then the book can be opened and the skimming off of the bark can be done; and finally it is all folded together. I think that’s called the enchilada grafting technique.

Did you check out my pictures up thread? I did the same graft with a large diameter trunk. My version is less graceful but I took better pictures from better angles, I think. I love the technique; coupled with parafilm it feels very very forgiving and flexible.

I figure I have branches I pruned the same size as my grafted pieces sitting in the yard in the kindling pile that are still green and moist after a month in my current climate. I figure that means in my climate, knowing that the forecast is in the callous forming temperature for most fruit trees I have, I have over a month for the graft to take before its even in danger, and I have given them nearly two inches of potential grafting zone under the bark. I went four for four top working a peach in it’s fifth or sixth leaf last year, and I did six peach already this year and six pomegranates. I have six more of each to do when scions start showing up, so I will have a better idea of how successful I really am with it with a better sample size. When the sun comes out I will show the result from this year’s growth.

Can any of you explain any advantage of complicating beyond a splice for spring grafts? The stronger connection via tension of an insert doesn’t count because electric tape (rubber or vinyl) renders that mute. I was at a site where I gave a 5 minute tutorial to a customer that claimed she was completely incompetent to perform skilled tasks. She used a cheap by-pass pruner to make about 10 grafts and only one failed- her first try. She had a couple that grew over 4 ft. and were well branched after a single short (northeast- late spring) season. Konrad always claimed he could perform his grafts in 5 minutes, but I wonder how long it took for him to get there. It takes me about 10 minutes a splice by the time I’m done wrapping and labeling and I do at least a couple hundred a season. How many hours would I waste by using a more complicated graft?