I’ve been interested and had some moderate success in growing heirloom dry beans this year. As far as I can tell, SSE, Baker Creek seeds, and the following two are good sources of bean seeds/info.
A Bean Collector's Window
http://wrightsheirlooms.com/
seem to be good sources of seeds/info. Anyone else have any good sources/experiences/recommendations?

I’ve tried Tepary beans from Nativeseeds.org . The package says that they might have mosaic virus, and I did see it in some of my other bean plants this year. I’m giving up on tepary beans (productive, but alot of bending for tiny seeds) so I probably won’t be ordering anything from them this year.

I’ve wanted to try https://www.sandhillpreservation.com/ . They have a rare bean variety that’s supposed to be resistant to rootknot nematodes.

That Bean Collector’s Window looks interesting! I honestly don’t like Baker Creek because they give so little seed for the price.

I buy great, fresh beans from Rancho Gordo. I plant whatever I enjoy the flavor of- just save some from the package and plant them. It’s that easy. I grew some amazing ‘scarlet runner’ beans in each of the last two years. Not sure of the price but I consider them free since I’m buying the beans by the pound anyway to eat them.

I lucked out with my Baker Creek bean selections this year! Just the beans, really.
The Ozark Razorback cowpeas I tried produced amazingly well despite being planted in a small area with no support and a lot of neglect. Here’s what one packet planted got me: 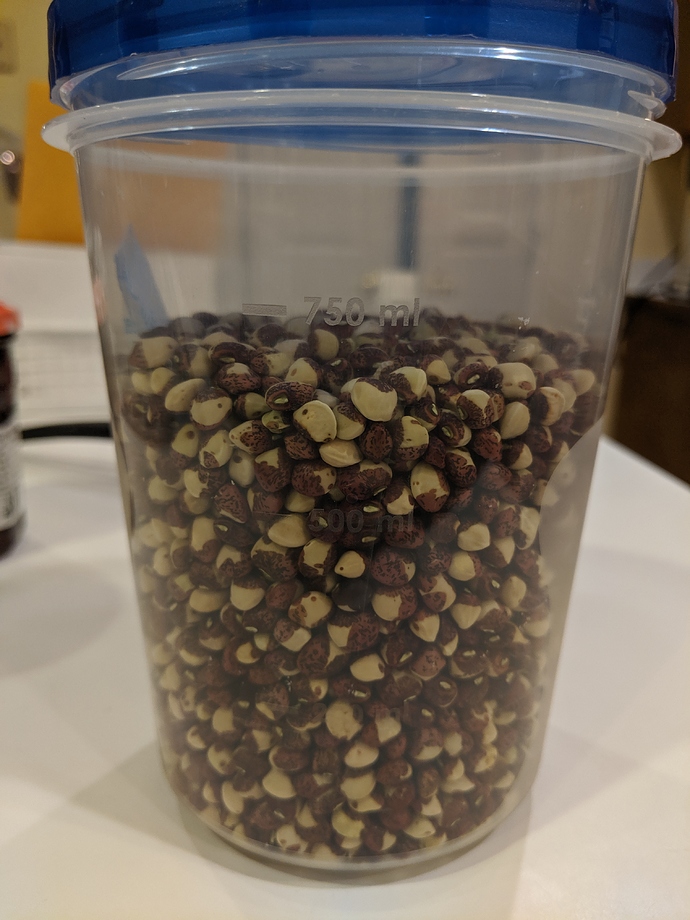 I am pretty happy with the low-yielding Brown Lazy Wife bean, since I actually got it to produce seed despite the awful extreme weather that screwed up my garden this year. I learned a lot about it’s growth habits, namely that heat and humidity will kill it. One of the vines that survived the heatwave that doomed the rest continued to grow and produced a final pod right before frost, so I’m going to try growing those seeds out. I might eat what was produced or save it to plant another year, they look very tempting but there’s only enough for two to three servings.

It would be nice if they had more bulk buy options, but for my current small garden it’s nice to trial a bunch of things and compare them, even though it’s not time or cost effective. Southern Exposure would probably the best source for reliable seeds for my lovely hot and humid coastal Mid-Atlantic climate

Do you have any recommendations on when to pick cowpeas (southern peas, etc) at the fresh eating stage? And how do you thresh them? I was cleaning my lima beans individually, but eventually I got tired and just started rolling and mashing the dried pods with a large cup. It went somewhat faster, but not by much.

elpels in botany in a day claims excess consumption of fabacae is linked to depression but doesn’t provide a source. anyone know where this claim comes from? maybe he hates peas. i’d be careful not to overdo it on the beans and peas.

Never heard of this claim before, and it’s a weird one. There are health issues linked to fabaceae consumption, but nothing as broad as “depression”. Someone who has favism shouldn’t eat fava beans. If you don’t soak and cook kidney beans (and other beans to a lesser degree) properly, they can be toxic due to lectins.

Depression is such a complex thing, that saying “x causes depression” almost guaranteed it’s an old wives tale. Things like lack of vitamin D and other essential vitamins and minerals can contribute to depression. I wouldn’t say “cause”. And beans are a highly nutritious, have lots of dietary fiber and are a good source of protein, so lack of nutrients doesn’t fit.

Maybe this person is referring to other species in the Fabaceae family? Not all of them are choice edibles.

Yep, he hates beans. My parents are like that about lima beans. Whenever I bring them over, they get depressed because they hate eating them.

I like peas as snaps, too, though. Southern Exposure sells a variety specifically for snaps called Bettersnap that I’ve grown the last couple years and am quickly growing fond of. I trialed it last year and then isolated it and saved a bunch of seed this year. It’s like the yardlong beans, except the peas aren’t super long and they grow on bush plants that don’t need to be trellised.

So how do these compare in flavor to something like sugar snap peas? I’ve never had them or seen them for sale around here, but like the idea of something different than just regular peas in the spring and beans in the summer.

I wonder if Southern Exposure’s new Speckled Graham cowpea is the result of planting yard-long beans and cowpeas very close to each other? Its like the opposite of the Bettersnap. Long vines, long-ish pods that seem to be for shell or dry peas.

Edit: I just realized I’ve somehow only been looking at bush types! Now I need a bigger garden to try these out…

Cow peas and yard-long beans are really closely related. They have the same latin name, but are different varieties I think. However beans usually self pollinate, so unless they intentionally crossed them, probably not.