I have some specific questions regarding bench grafting that I’d like to throw out there. I know there is usually not one right answer but I am interested in what works for others. Thanks for sharing.

I’m planning on using the omega grafting tool to graft 1/4" rootstock. My questions are about what aftercare practices are most effective for everyone out there.

Cant wait for answers to all of your q"s

In my personal experience.

I agree with all of TurkeyCreekTrees points. There is some flexibility about when you might graft, last year I grafted with dormant scions well into May on fully leafed out inground stock, at least a month after budbreak, and I started grafting in March with my bareroot stock.
I treat plums the same as apples and pears when grafting, whether on the bench or in the field. Peaches and cherries benefit from heat to callus, so waiming for a warm stretch of weather is a good idea if grafting those in spring.

Thank you for taking the time to answer my questions. I’m excited to share my results this season.

Thanks! It’s good to know that there is flexibility in the timing. It’s also interesting that treating plums like apples and pears works for you when others say to treat it more like a peach. I will experiment with this and report my results.

I’m going to go somewhere completely else and say that no matter what I’m bench grafting that arrives as bareroot (ornamentals/fruits/nuts/all deciduous) I treat them all the same.

When they arrive I put them in totes with shaved wood or a mixture such as promix and do it promptly and then put the totes on heat mats and cover everything with light poly. As soon as I see the bud scales splitting or a bit of leaf unfurling I begin grafting on them. Like I said it doesn’t matter what they are. I pull each rootstock out of the media and bench graft it with either a tool such as the omega or my knife. I have moist bath/beach towels laid flat on a table and after each graft is completed I roll it in the towel covering the roots completely and the graft union completely or the entire thing if it fits in the towel. Roll it over once and continue grafting and rolling one after another in that damp towel. I completely squeeze all the water I can from the towel so it’s damp/moist and not dripping wet. That’s how you want your towels to be.

You can keep rolled towels with grafts inside anywhere until you’re ready to put them onto heat mats, or if you have room on top of a heat mat immediately, place the rolled up towel inside a large garbage bag and set it on the heat mat. Come back in two weeks and check for callous. It’s very visible when the callous has been generated. If you don’t see adequate callous - then go ahead and give them another week. 3-weeks is all that should be necessary. You can put multiple rolled up towels in one garbage bag (that you sealed the end on when the grafts were placed on the heat mat - tied if off in other words but leaving a bit of an opening for air exchange.) That’s why a garbage bag works very well.

After callous, remove the grafts that did callous well back into your tote or totes so the roots are covered and back onto the heat mats the tote goes. At this point you should give the grafts as much light as possible in a spot where temps are between 45F to 85F. 55F is a pretty typical temperature for greenhouse grafters. 45 is on the low end but will work just fine.

Later when all spring frosts have passed you can either plant your new grafts in the ground or move them to containers.

The towel method is very similar to the use of a heat callousing bench/hot callous pipe. It’s the same principle.

Here are a few photos of what I do in my basement. 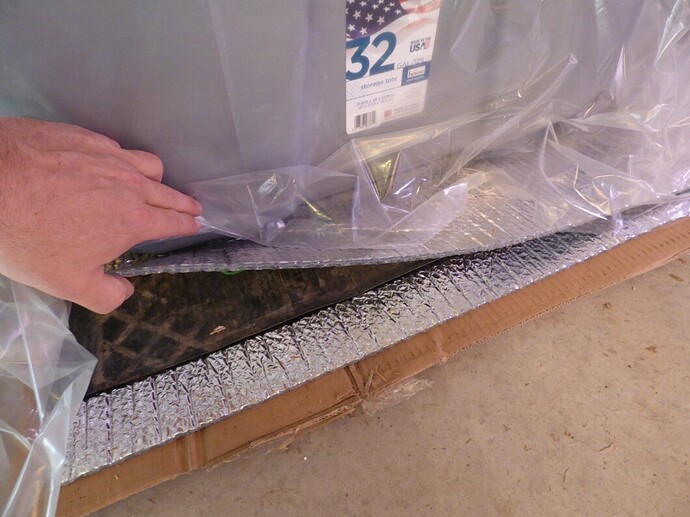 A couple bags of rootstocks. I take my pruners and cut them all to one height so they’ll be easy to cover in the totes. 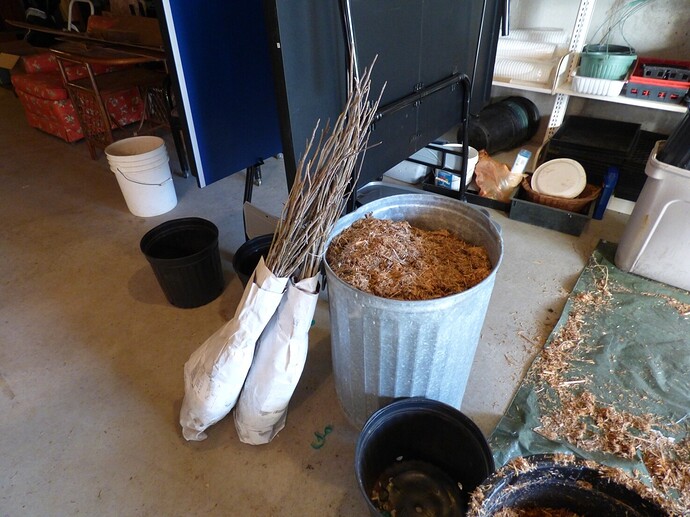 Here’s a shot of after they’ve been chopped and dropped into a tote to next have a piece of poly draped over to warm them up. It will take 4-6 weeks for the buds to show signs of life at which point you will begin grafting. 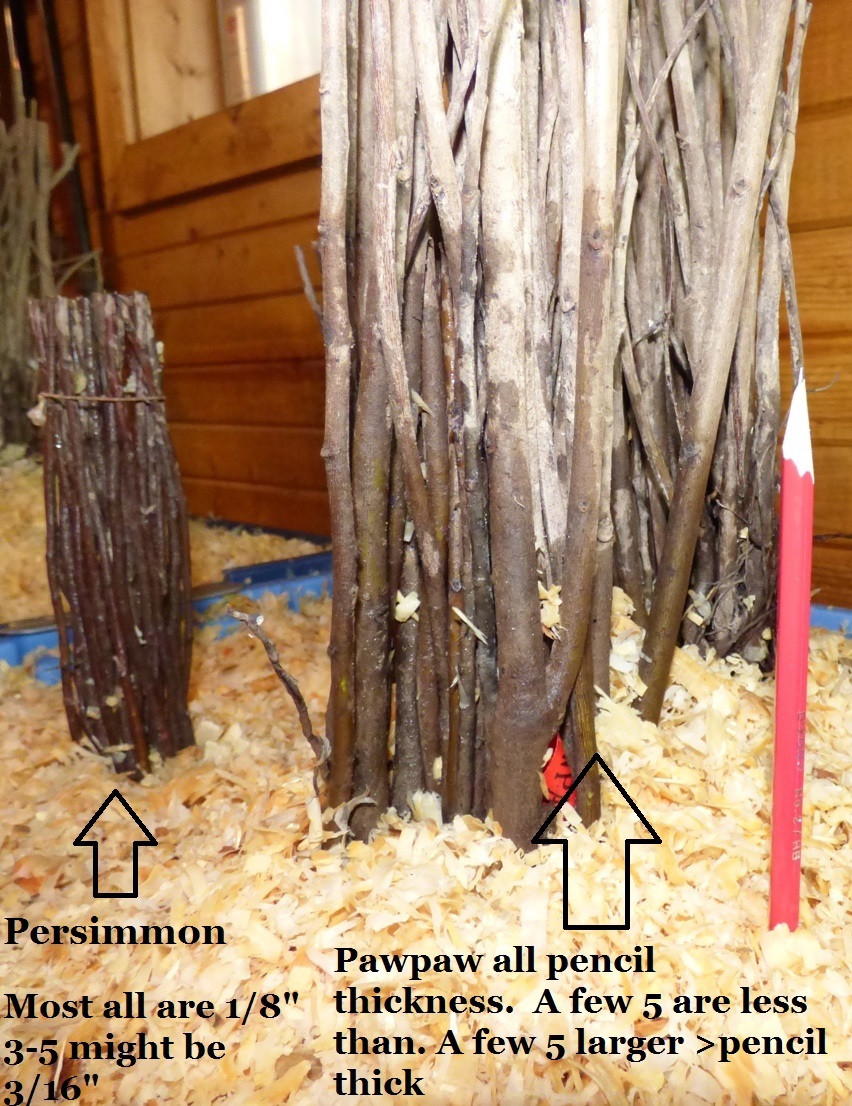 The towel on the left I will roll the grafts up into. 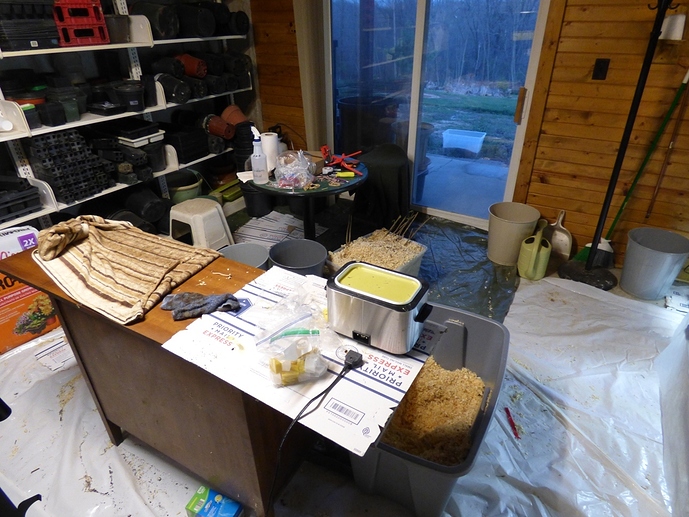 When the grafts have calloused inside the rolled up towels they’ll go into totes and into as much light as possible as I said. I wax everything so the scions cannot dry out and/or use parafilm tape also covering the union area. 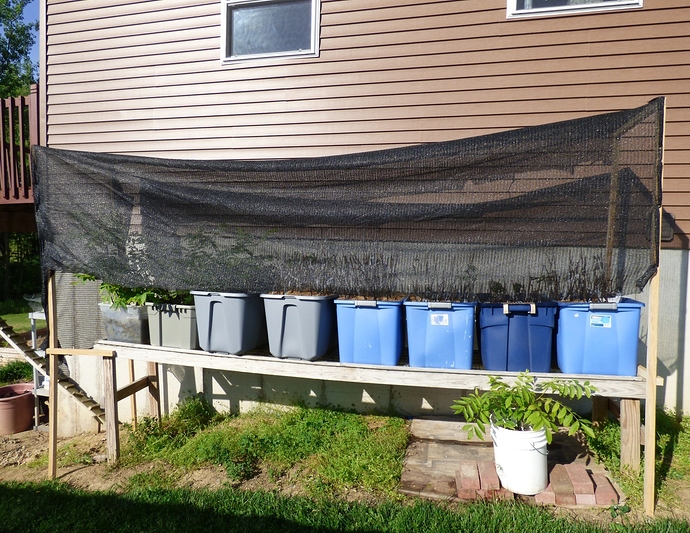 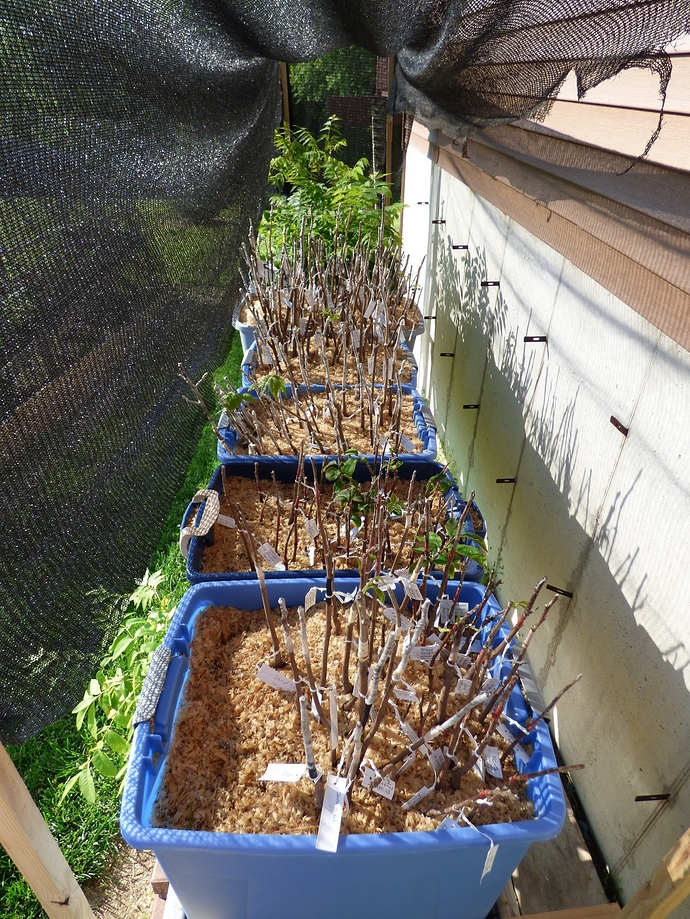 NOTE: last year I bought pine shavings in a cubic bundle from Walmart that are typically used for bedding for animals. It was a bad move because they held too much water. Years prior I used wood shavings that are thicker randomly sized pieces. Peat moss/Promix would work just as well as larger wood shavings. What I used were ground up pallets that my friend had a ginormous pile of given to him from his son-in-law that owns a pallet company.

I have planted same day bench grafts in the ground in mid-March that suffered no injury from later frosts and freezes after planting. Was I just lucky or are bench grafts pretty resilient?

I have planted same day bench grafts in the ground in mid-March that suffered no injury from later frosts and freezes after planting. Was I just lucky or are bench grafts pretty resilient?

Did they break bud before your last frost? I dont plant mine early in fear of a late, hard frost killing the recently opened buds. I think most grafts that remain dormant are pretty resilient.

No they stayed dead dormant until well past frost/freeze. Am curious why a bench-graft, even if it buds out before a freeze, wouldn’t be as cold resistant as an established tree? The cut surfaces of the graft seem well insulated with rubber bands plus parafilm. Always wondered about this.

I have top worked apple trees a month before the typical last frost date, never had a problem, temps going down to at least 25F at night.

I’d need more information to answer your question @hambone. Probably the most important question is how long were the grafts stitched up outdoors and what was the temperature for the 7-14 days prior to that frost? Grafts can heal in as fast as 7-days. I wouldn’t recommend planting bare-root grafts until after they’ve pushed and hardened that first set of growth off, ever. You shouldn’t be taking bench grafts outside until the plants and trees in your area have moved along pretty good and then still be on the cautious end and completely aware of the historical weather data in your area.

Now the other half of the story is there are people w/o greenhouses who cold-graft. It’s not a very successful technique but there are people that have seedlings in containers (frozen solid) in their garage in cold climates (zone 4 or 5 or wherever) and bring them indoors for 48 hours and graft on them and then take them back to their garage and wait. I’m talking dead of winter, not late March or April. They’ll get a few to go but the majority won’t make a successful plant.

You’ve probably heard it’s best to cut scionwood when a string of several days (I like a week myself) above freezing occurs day and night. The truth of the entire matter is that I wait as late as possible so that the trees I’m cutting from have already began pumping sap up into the wood. That’s the ideal time to be cutting scions. I’m not sure where this has relevance to your question, but it is something good to know about.

Thanks Dax. All I can think is that my zone 7B is pretty forgiving on planting out bench-grafts.

Timeing must be more critical for grafting In colder areas than ours. I graft all during the winter after Christmas. Rarely do I have one fail to grow.

I am glad that this subject came up as I am doing a few pears and plums this spring. I have had great success holding my apple bench grafts at 35F in a cooler for 4 weeks after grafting, then potting up. But I had done a few pears and plums the same way with less than optimal results. Thanks Barkslip, I hope you don’t mind if I copy your method. I am certainly going to use it this spring as I managed to get a hold of some Russian pear scion that is supposed to be hardy for my area.

Thanks for sharing. Your methods are a little counterintuitive to me but seem to be working great.

Glad to share, all. And, if you can get your heat source up to around 82F that’s ideal.

I have had limited success grafting stone fruit but, bench graft over a thousand apple and pear trees every year with a 98% success rate. I keep rootstock in refrigeration until grafted then pack it upright in damp peat moss with plastic covering the box at around 50-60 F for a couple weeks. I might put it back in refrigeration if it starts to push new growth before I can plant it. It could probably be put directly into refrigeration after grafting but, will take longer to callus. The idea is to not plant it outside until the callus has fully formed and the danger of a hard freeze has passed.

BTW, a whip and tongue graft is superior to grafts made by the tool and will have a higher take rate especially if your scion is smaller diameter than the rootstock.

Thanks for sharing Dax. I like this method but have one question: could I place the just-grafted rootstocks back into the bins with peat and cover with poly rather than placing them into the garbage bag to callous? I understand heat and moisture is greater in the bag but it would be simpler for me to skip it. Thanks for your time.

Yes but I would highly recommend that the graft unions are buried below the media. And you want to see steam/evaporation bubbles on the inside of the poly so be sure to get it tucked under the bins very well. Allow some fresh air in every couple days and if the poly has large amounts of water or large droplets, flip it over from time to time or each time that occurs. You want what looks like mist on the inside of the poly. And if you cannot bury the unions but have this very good condensation - you’re good to go.