I believe Honeycrisp ripens sooner, so maybe CC wasn’t quite ripe yet- However, it doesn’t have HC’s big cells. Whole lot easier to grow, though.

Not the same as far as I can tell. I grow them both and Pink Parfait ripens before Strawberry Parfait if I remember right.

I think that might be backward. Green mantle says Pink Parfat needs a long season to ripen. Strawberry Parfait ripens here in July to early August.
Have yet to get apples from Pink Parfait though.

That’s what I see here. Strawberry Parfait ripens in August, just before Gravenstein. Pink Parfait is one of my latest apples, ripening in December.

And while I do like the former, the latter is in an entirely different class, at least in my cool coastal climate. It’s definitely my best red-fleshed apple, and one of my best apples of any kind.

Awesome report! One more reason to look forward to tasting for myself.

Might be! Just got off a cruise to Cuba and was trying to remember.

Did you bring back any Cuban scionwood under your cap or an secret pocket?

Ha ha ha no! However oddly enough the customs agents in Cuba are all young women who wear black fishnet hose and short skirts. We were told not to take pictures of them or ask about the hose! 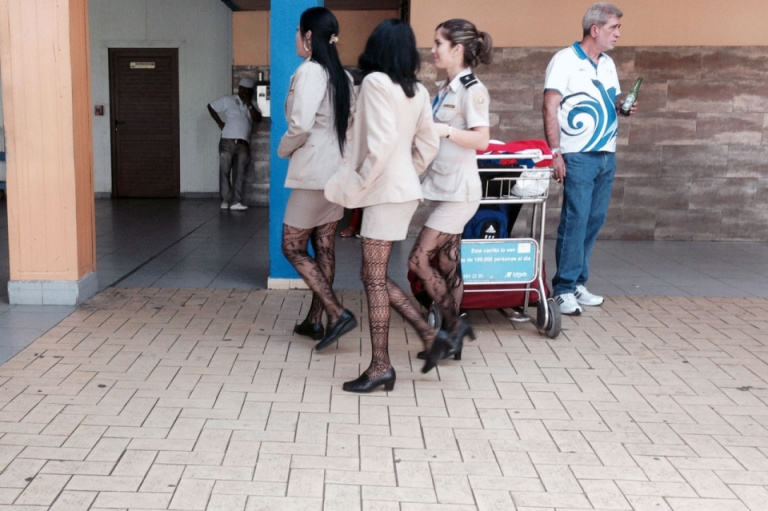 @HighandDry posted his apple tasting reviews on the persimmon thread per my request, I feel that such good review should be re-post here. So, here it is for all the apple lovers to read. Thanks, Neil.

"I shall preface my first book with some dull, but meaningful information:

Damson (unnamed variety from a scion exchange in Sacramento, CA) 30-31 Brix in 2018. They were better and possibly sweeter the year before, but I didn’t have the refractometer before they were turned into the best jam I’ve ever eaten.

Grapes - harvested 9/28 because the bear was just smashing through the bird netting and pummeling my vines, otherwise, like my late apples = sweeter:

Drum roll
Apples, in no particular order. I won’t include every apple off of my trees , but I’ll highlight most of my best performers to date–some day I’ll sit down and mash out a Scott-esque fruit report on all of my varieties, but that day is not today. Harvest dates are for 2018, as I can’t find where I recorded that info in 2017, though the latest was October 15, a few days after the bears arrived.

I have scads of other apples I could toss out here, but think four hours to read this is long enough for all of you who stuck it out this far. Late frosts and Bears aside, I’m very fortunate that my growing conditions allow for some unbelievable expressions of flavor and sugar to shine in my fruits, especially my apples. Swing on by for a visit in October and we can taste our way through the orchard (installing an electric fence this year and maybe getting a tiger or at least a mountain lion to replace the scaredy cat; bears beware!)."

Wow, for a second I thought those were your readings! I’m assuming that high and dry lives someplace high and dry and not in a humid part of the country given the high brix readings.

The quality of the apples is probably highly affected by the climate and if it is at a higher elevation, perhaps the intensity of the light itself.

Yes those brix numbers are amazing. I’d love to see what apples at that high a brix taste like. I’m sure its quite a bit different than how they taste in my orchard, and you probably want more acid overall to balance all that sugar. So Rubinette instead of Kidds for example.

You are correct. I’m at 4700’ in Reno, NV in the high desert on the western edge of the Great Basin. Hot, dry summers with cool nights and fall temperatures that seem just right for sweetening up later ripening apples.

I’ll see what I can do about that this fall. I wish I could send out samples to everybody, but that’s not a reasonable use of my time, money or apples. You, Mr. Forum Boss, are an exception. I hope I’m able to send a few interesting examples to you in October.

I can attest that Neil’s apples had intense flavor. Even the same variety we have, his is more intense. Apple enthusiasts will definitely enjoy those apples.

Neil, when I make a trip to Nevada next time, it’d be to your orchard, not Vegas , or maybe, Vegas, too, to check @jujubemulberry’s orchard, too

How long have you been cropping apples there and how reliable is the cropping? How is the water issue?

I’m at 4500 ft with plenty of sunshine. But we get more rain than Reno from July thru October. When I cut back water to increase brix the Goldrush crack in Sept/Oct when it rains. There’s not much I can do about that.

We are also hotter in fall. Too hot to maximize apple quality. Reno has cooler nights than here.

My question for Neil is what’s your apple size like? Do you think you give up size to get those brix levels?

@alan @fruitnut Your questions require me to flesh out my orchard history a little bit. I planted, or rather, I had planted my first three apple trees in 2000 or 2001. I planted two apricots a year later. The build-an-orchard compulsion settled in around 2004 and I started grafting to rootstock after that. I redesigned my orchard sprawl two or three times as I settled on tree spacing, moved a lot of trees around each time to suit the new configuration and figured out the maximum amount of my property I could get away with co-opting without becoming single in the process. I also made some dumb mistakes (still do), had deer appear beginning in 2010 and destroy or severely set back young trees (75% of my orchard at that time) until I fenced them out permanently in 2014, and you know about the bears.

All of this poor planning, mediocre execution and bad luck led to lots of lost trees and little more than sporadic apple production from a few varieties–primarily Claygate Pearmain, Ellison’s Orange (gone now = hated the heat here), Freyburg (good but tree began failing in 2016 and died last year), E. Spitz and Newtown Pippin-- until 2015. My deer abused trees had recovered enough by then to start producing and, beginning in 2016, some of the 30 or so trees I’d grafted in 2011 and planted into the orchard in 2013 began producing. We also seem to have had less treacherous spring weather the past five or so years and there have been fewer late frosts that have killed most of the fruit around here, though I’d have to research that to be sure it’s an accurate impression.

I ought to have a minimum of 10 years of solid fruit info to report on, instead, I have six to eight years of cropping information on a handful of varieties, four good years on another 10-12 and one, two or three on lots of my varieties as the most recently planted trees start fruiting. Before 2015, cropping was very unreliable for the above reasons with contributions from others I won’t bother to lis, but I expect I will have apples every year now on some of my latest flowering trees unless we get a really cold late frost in mid to late May, something that appears to happen less frequently these days. Maybe that’s climate change in action.

Reno averages around 7.5" of precipitation annually. My property is located in the lower foothills of the eastern side of the Sierra Nevada in a frostier microclimate four or five miles west of the airport, where the official precipitation and temperature readings for Reno are measured. I probably get 2-4" more precipitation a year than at the airport. Someday I’ll install a weather station and confirm. Anyway, water is an issue. I irrigate. I’ll turn on the orchard drip sometime next week, a little later than usual, but we had a wet winter here, and I like my trees to stretch their roots before I turn on the water. I irrigate all the way through the season until the trees start to go dormant in late October/early November, earlier if we get any decent and regular precipitation before that time (not at all the norm). I don’t know how much water I put on the trees. I should measure, but I haven’t refined my cultural approach to that degree yet. Even with the irrigation, I’d imagine my trees are somewhat water stressed at the height of summer compared to those of you in wetter, more humid environments.

Regarding apple size, if I had to guess, I’d say my apple size is far more dependent on whether I’ve thinned the trees properly than on the climate. I do have some trees on the leanest, rockiest soil in my orchard that seem to produce smaller apples, but that again could be poor management by yours truly. Those trees are my slowest growers, so I know the soil affects that side of the growth equation.

I should pay closer attention to fruit size and Brix. Based on the performance of Claygate Pearmain, the smaller of the two types of apples in produces for me are definitely sweeter. I have no idea if this condition is unique to me and this tree or if it’s normal for CP. If it is, I’ve never read about it. Melrose makes large apples in both of it’s fruiting seasons. Sweetness doesn’t seem to vary from the largest specimens to the somewhat smaller. The same is true for any other regular cropper I can think of here, but I admit that I haven’t paid close enough attention to this to be certain. If you’re ever in Reno in the fall, look me up and we’ll eat fruit and take notes.

Just remember that Las Vegas is an eight hour drive from Reno. It’s better to fly from there to here, unless you want to explore the Great Basin a little. Nevada is a big state.