It sounds like humid, rainy springs may contribute to russeting. At least that’s what they describe for Taylor’s Gold, the russeted sport of Comice. In many climates, apparently it doesn’t fully russet and people find that a turn off.

I don’t know if the russeting makes the fruit better so much as, apples that are popular in spite of their russeting were so delicious, the skin was overlooked.

If there were a variety of apple that showed up in the supermarket with the equivalent of sooty blotch, you’d know it must be good. I guess its like “with a name like Smuckers…”

If there were a variety of apple that showed up in the supermarket with the equivalent of sooty blotch, you’d know it must be good. I guess its like “with a name like Smuckers…”

My favorite is Opal
McIntosh is second
Roxbury Russet is third.

I have a new russet that fruited this year, King Russet. It is supposedly a sport of Reine des Reinettes. It is one nice-looking apple, with an absolutely perfect coat of russet on it. I didn’t get a really good sample as the animals got nearly all but it seems like it could be one of the better russets, very flavorful.

My HR was on a bad root and I had to move it to a new root this spring… too bad as it was going to fruit this year.

It may just be a coinscidence but, for most part, apples that are or are prone to russeting have more complex and intense flavor profiles.

There is a theory that russeting increases transpiration through the fruit skin, which results in a sweeter and more intense flavor.

I will get to taste Bonita apple for the 1st time. It’s a resistant variety from Czechia, Topaz and Cripps Pink cross, should have a good storage potential as well. I heard it’s widely planted in commercial orchards in Tyrol. 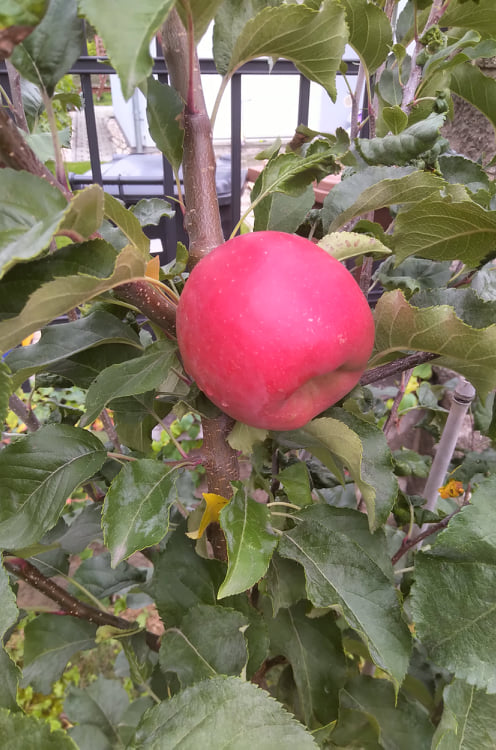 I pulled an Ashmeads from a client’s tree yesterday and it was a perfect apple to me, dense crunchy flesh, high sugar mixed with high acid. The thing is that quality can vary quite a bit year to year and we’ve had little rain and ample sun for the last few months so apple quality has generally been quite good here. Incidentally, the two 4-season grafts are fairly massive and they bore a pretty good crop this season.

I have a AK on M7 that since it started bearing 10 years ago has only given me one good crop. It just wants to grow lots of wood although the soil isn’t very rich deep or moist and it receives no irrigation. I’m turning it over to other varieties and attempting to grow grafts of it on other parts of my property. So far they seem more productive for some reason.

Taylor’s Gold (thanks!) fruited for the first time this year on 3rd or 4th season (probably 4th) grafts as the top tier on my four tier Comice espalier. Pears cropped bigly for me this year, including Comice for the first time, a sporadic producer for years now. I have no idea why pears did so well, but I’m darned happy about it. Anyway, to your point on humidity and russeting, that seems a plausible explanation, as many of my russet varieties fail to fully russet, including Taylor’s Gold, which has only slightly greater russet overall compared to Comice. I’ll take pictures and compare taste when I start pulling both from cold storage four or five weeks from now.

Nye Russet Bartlett, on the other hand, although not fully russeted on most fruit, is definitely more russeted than Bartlett and, true to claims, is sweeter, measuring 2-2.5 points higher Brix (18) than Bartlett this season. The skin has a definite tannic bite, so that sweetness is welcome.

Herefordshire Russet is one of the few seemingly unaffected russet apples I’ve grown. If Tippy’s specimen is what they usually look like back East, then it grows true to form in multiple climates, because her apple looks just like mine.

Re Scott’s King Russet, I’ve fruited a handful both of the last two years and without fail they are hyper-cracked 1.5” balls of cork. I have a couple of older grafts and second leaf tree that is growing well, but I’m already considering grafting that tree over to something else (maybe another HR). I’ll give the grafts a couple more years and hope they settle down, though many other russets never did and were eliminated.

Finally, and most disappointingly so far, Hooples AG in its 4th leaf as a graft only produced a few small, cracked and corky apples last year (frosted off along with most of my other apples this year). I have a 2nd leaf tree of Hooples too, so it had better turn itself around, because I do not need three HR trees in my limited orchard, and I want more tasty russets.

Sorry to hear about your HAG not performing well for your. Is it the rootstock? (one needs to blame something else first). My two grafts were grafted on two different apple trees that both have M 7 as their rootstocks.

Talking about russeted apples. This one fell to the ground. Not sure where it came from (under amulti grafted tree). It had a good size and very nice russeting. Definitely not a HAG as it fell not near where HAG are.

It seemed ripe. Tasted mild, not very sweet or tart had some crunch to it. Not bad but I would rate it only a 3 out of 5. Anyone would like to guess what is was. 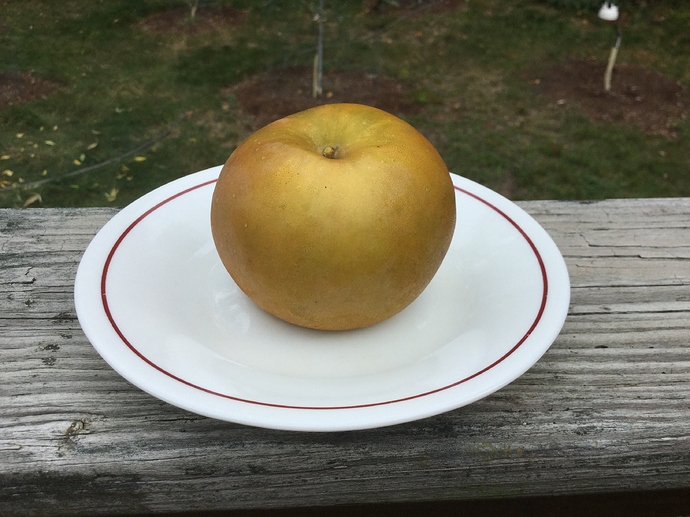 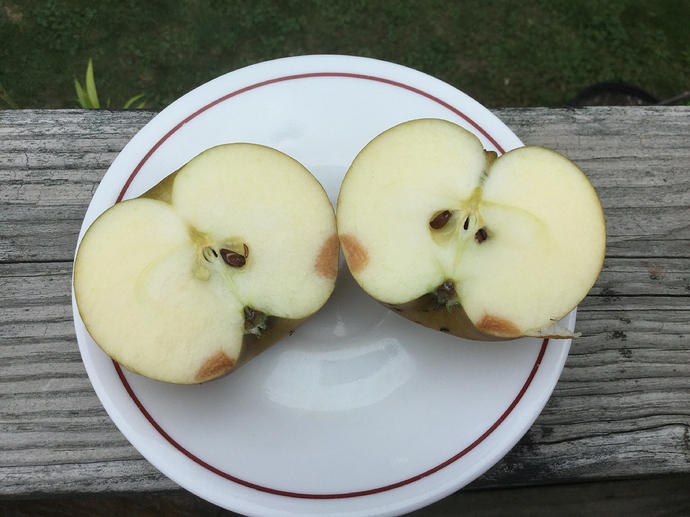 I have Hooples on a multi grafted tree top worked over Cinnamon Spice (awful here) on MM106, my best performing rootstock here thus far. That same tree produced a 1/4 bushel of very nice Ananas Reinette fruits this year on another scaffold placed in 2017, the year before I stuck on HAG as the new central leader. Next year! The 2nd leaf HAG is on G890.

I recalled I grafted HGG somewhere on that tree (it has 20 varieties on it). I don’t know where HGG graft is on the tree!! It is rounder than HAG.

My Ananas Reinette decided to reduce in size and taste this year. It is productive but has been a big disappointment this year.

Here are my first year’s Pomme Grise. Small but tasted good. Mine are not fully russeted. 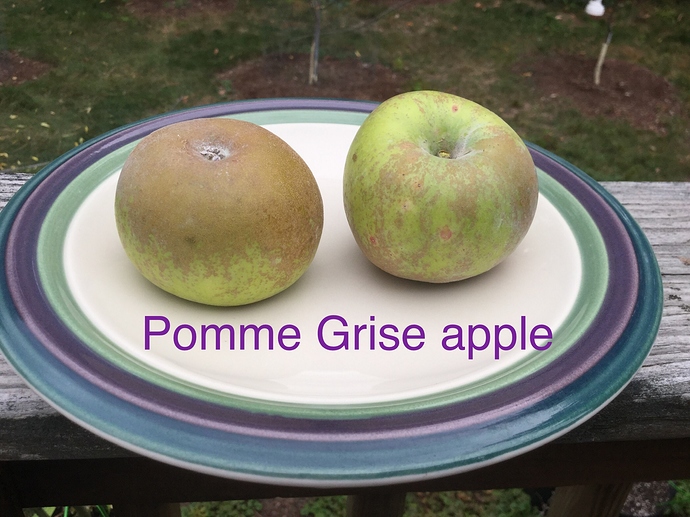 Finally, and most disappointingly so far, Hooples AG in its 4th leaf as a graft only produced a few small, cracked and corky apples last year …

And I thought my climate was challenging! I usually get nearly perfect HAGs, it is one of the easier apples for me. The fact that it and King Russet are both cracking and corking for you and I am seeing none of that indicates there must be something in your climate, soil, etc that is different.

@mamuang my Pomme Gris also would only partially russet, usually more than those guys but not all the way. Now I only have Swayzie which is very similar to PG, but Swayzie is pretty full in its russeting. Here is one 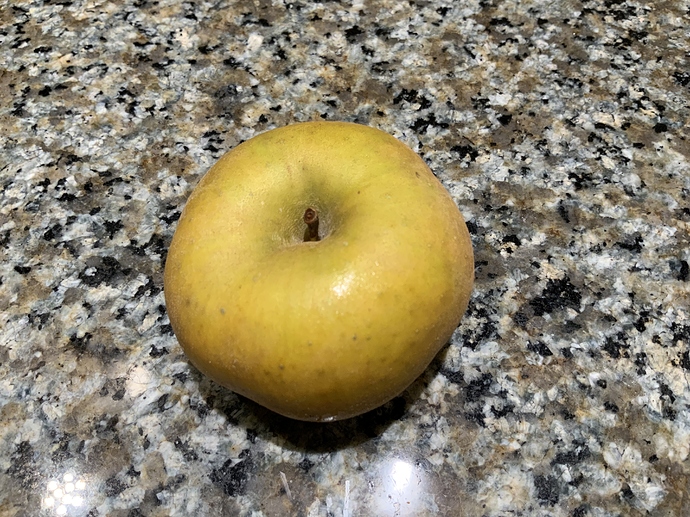 Scott,
What do you think the unidentified russeted apple in my post # 1031 could be?

I looked up Hudson’s Golden Gem, the shape of HGG is longer and tapered. My apple was quite round. It looked similar to your swayzie, even,
.

I am discovering one nice quality or russet apples is they are less likely to get bird pecks.
My red apples are generally bird magnets but they pretty much leave my russets alone.
Had a big crop is Hudson Golden Gem this year and not a single bird peck.

HGG is also a very interesting apple, quite remarkably pear-like. Nice texture and very sweet but not a good producer for me and a stink-bug, coddling moth magnet like Golden Russet. It is also tapered like a red delicious, narrower at the base than on top.

So my unidentified apple is definitely not HGG. Too round to be.

Interesting, I wonder if that’s the same as Russet King I got from Mike / 39thparallel. I’ve been trying to find info on that apple!