What is your favorite variety of thornless blackberry?

Natchez. Prime Ark Freedom might be its replacement but it is to early to determine.

Glad to hear a vote for Arapaho. I have it and Navaho and hope for a decent early berry.

For my area, Navaho by a wide margin. Its the berry my customers ask for by name, Unfortunately it gets orange rust.

For my area, Navaho by a wide margin. Its the berry my customers ask for by name, Unfortunately it gets orange rust.

Thanks Blueberrythrill. I was worried when I got them if I picked some decent blacks. And I will watch for any signs of rust. Maybe I should include them in dormant sprays? - Penn State reccs. lime sulfur.

I believe you will like the Navaho. Unfortunately there is no cure or even a good preventative for orange rust, The only solution is the dig the plant out ASAP, get it out of the field and hope it does not spread to other plants, Orange rust is real common on wild blackberry so. get rid of any wild blackberry close by. We have grown blackberry a long time but this is the first year we have had a problem with it effecting about 10 out of 300 plants. We sprayed lime sulfur (I hate the danger and the smell) during the dormant period along with multiple doses of fungicide to try to control the leaf and cane rust but the sprays have no impact on the orange rust as far as I can tell

So I will keep an eye out and hope Navaho stays rust free. Thanks for the info!

Arapaho and Navaho both have nice berry clusters formed. 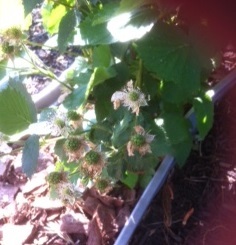 I agree that Navaho is a good choice, as the berries always taste good and it’s consistently, if not highly, productive. Ouachita has also done well, with plants that produce a decent crop of good tasting berries even in partial shade. Apache has done poorly for me, with great looking plants but berries that appear partially pollinated or get white drupes. A neighbor has some triple crown, and they’ve been very productive and very vigorous plants.

Apache has done poorly for me, with great looking plants but berries that appear partially pollinated or get white drupes.

Same here with Apache. There on there way out of my yard as I put in replacements.

Auburn, have you decided on a replacement? I’m getting rid of my Apaches and Kiowas, the Apaches for the reasons mentioned and the Kiowas because I’m continually fighting Anthracnose and Septoria leaf spot.

have you decided on a replacement?

I’m still in the process of deciding. Triple Crown is doing well for me but I’m concerned about it ripening during July and August (planted about 20 more this spring). If my Freedoms do well they might be my early and late berries. I would like to settle on about three varieties that cover late spring through fall. It might take another season or two to decide. I noticed your in zone 7b. Are you located anywhere near me in central Alabama? Bill

I’m in Carroll County, GA, which is right next to Alabama. How’s the taste of your Triple Crowns?

How’s the taste of your Triple Crowns?

The TC seems to be just slightly sweeter than my others. It has been a vigorous and productive plant that starts ripening about mid July. It’s good to see others posting that are in a similar zone. One of my daughters/grands live in Powder Springs so we pass nearby when we visit. Bill

Triple Crown hands down. Grows like an aggressive wed around here. Huge plant.

My Ouachita are large plants too. They produce a huge berry, but you really have to wait until they are very dark before they sweeten. Due to our really harsh winter this past year my crop is going to be smaller than usual. I like the berry but I would really like to try Navaho. Maybe if I decide not grow potatoes any longer, I’ll turn that bed into more blackberries!

I need to try more but so far Navaho, and Triple Crown. I expect Columbia Star to be excellent also. I will get a taste this year.

Does anyone here have experience with Osage? I have one Navajo, one TC and one Osage and will probably just go with one of these for my small patch, but it is first year and no berries. All seem to be growing well in part sun, part shade.

Here’s my newly planted thornless blackberries (3’ spacing. from left). It was taken this afternoon, after I weeded the bed, but before I applied a good layer of woodchips.

Of my existing thornless:
Triple Crown- They have the best flavor of any non-trailing blackberries I’ve seen (Boysenberry and Marionberry are better). Their big negative is that their season is late enough that the second half is squarely in SWD’s crosshairs. That’s why I planted the above varieties. I put them where Caroline raspberries used to be (another SWD fodder) and put summer raspberries where Prime Jan (also gets lots of SWD) was. This maneuver will cost me fruit for a few years, but it will be worth it to lessen SWD’s impact.

I found out this year that Triple Crown is also a bit winter tender. My canes died back to ~2’ (snow level), but are still flowering and look like they will produce at least a partial crop.

Apache- it has been a bit of an afterthought for me. The flavor isn’t as good as TC. They did come through the harsh winter better, with growth up to ~4’ and only some dieback.

Ouachita- not impressed with the flavor, but I find a good one every once in a while. Nice errect structure, so I haven’t gotten rid of it yet.

Their big negative is that their season is late enough that the second half is squarely in SWD’s crosshairs.

TC has been a heavy producer for me but I share your concerns with the ripening date. I’m testing a few varieties to see if I can work around the peak SWD periods. Hoping my Freedom primacanes ripens after there peak period. Good luck, Bill