For those experienced and successful with grafting American persimmon, can you tell me the best method and best time to graft? I want to graft my Morris Burton and Yates onto some seedlings that I grew out.

Thanks for the advice!

Are they in ground or pots ?

I would what until you have a few inches of growth.
On new shoots.
With a warm forecast , for in ground .

I agree with @Hillbillyhort, better to graft persimmons much later than apples, pears, etc… after your rootstocks have started to leaf out and the bark is slipping (usually late March/early April here in 7b, NC). I’ve had the best success with bark grafts.

I have had good success with whip and tongue grafts. I would also wait until they are starting to leaf out and the days are warm.

Thanks, all. Has anyone had success with cleft grafts?

edit: yes, I’ve done clefts although I dislike them–see below

it sounds snide but isn’t: the best graft for persimmons is the one you can do most precisely.

Persimmons aren’t unique in how they heal, so any graft works in theory…I should add the caveat “in my experience” to that, but I feel pretty comfortable in what I’ve seen thus far.

What matters for persimmons is they can be a bit slow anyway, and particularly if it isn’t warm and they aren’t “nice and woken up.” That slowness is why people like say bark grafts, for example–they are a high-cambium-contact graft that tends to start callusing (and therefore “feeding and watering”) your scion more quickly, most of the time (all things being equal).

The parenthesis above are the rub: all things are rarely equal. So if scion, rootstock, angle, etc. somehow mean you can do a much better cleft than you can bark, that’s still the better graft to use.

I hate cleft grafts because they are ugly as sin, but done well they do work pretty well. And sometimes they’re your best shot. I don’t hesitate to use them when it makes sense. I likewise don’t like bark grafts because they don’t “anchor” as well…I can do them, and if the birds and the wind both agree to play nice, they take. But they by design knit mostly from one side, the other open side stays weak for part of a season, or even more. So I probably do more clefts than bark.

All things equal, or even just reasonable, though, the whip and tongue is my favorite–there is a LOT of bark contact, I can make it match up pretty well, and the tongue makes it a firmly affixed graft, some are stronger than others but most compare pretty favorably to my cleft grafts but with way more cambium contact. Also, I’ve been known to cheat and wrap the union w parafilm, then place a small twig flat along the branch, spanning the graft union, then parafilm THAT in place too, essentially “splinting” the graft.

But again, the graft that’s the best is the one which works the best.

@markalbob, nice break down of the relative merits of each of these types of grafts. @RobThomas, I would just add that you really ought to brace or stake your newly grafted tree no matter what type of graft you choose. Make the stake taller than your tree or branch so that birds are more likely to land on the stake rather than the scion. Most of my graft failures have been due to the wind or birds breaking off an otherwise successful graft that has already put out a foot or so of new growth beyond the original scion. The graft union will be a weak point for at least a year and needs to be supported.

I don’t have good fine motor skills for whip and tongue. To preserve my fingers, I have used cleft graft for almost all my persimmons (a couple of bark graft due to a very small scion size). Almost all took. The ones that did not take, I blame it on questionable scionwood quality!!.

Like others said timing is also important. They wake up late. Let the rootstocks or trees wake up a bit before you graft.

Thanks everyone for more tips. I appreciate the detailed breakdown, @markalbob. I think I’ll try a couple of different grafts to see if one type works any better than the other. Seems like timing may be the most important part, which I assumed would be a big factor.

@mamuang I also do most of my grafting as cleft. Super quick and easy.

Surprisingly no one mentioned chip budding. It’s the first choice method for me and provides maximum cambial contact.

First persimmons I ever grafted, over 25 years ago - before anyone told me they were ‘hard to do’ - were just simple whip grafts… just like the first apples I’d done… long, sloping cuts on scion and rootstock, placed in apposition to one another, wrapped with a rubber band then overwrapped with Parafilm. 100% takes (granted, it was only 2 that year!).
Nowadays, I pretty much just do a simple bark graft… well after rootstock is pushing leaves… bark’s gotta be slipping, and they need some heat to callus in.

Biggest thing, IMO, about persimmons, is aftercare… you’ve got to be diligent in keeping rootstock shoots below the graft rubbed off - I mean, you need to do it at least twice a week! Persimmon is VERY persistent in trying to push growth from the rootstock, at the expense of the grafted scion, and you have to stay on top of them for the first growing season.

Lucky,
That’s so true. Of all the fruit trees I have grafted, persimmon is the most persistent in pushing growth below grafts, both on existing trees and rootstocks.

This is a one year old seedling to be grafted around April, w/t graft. 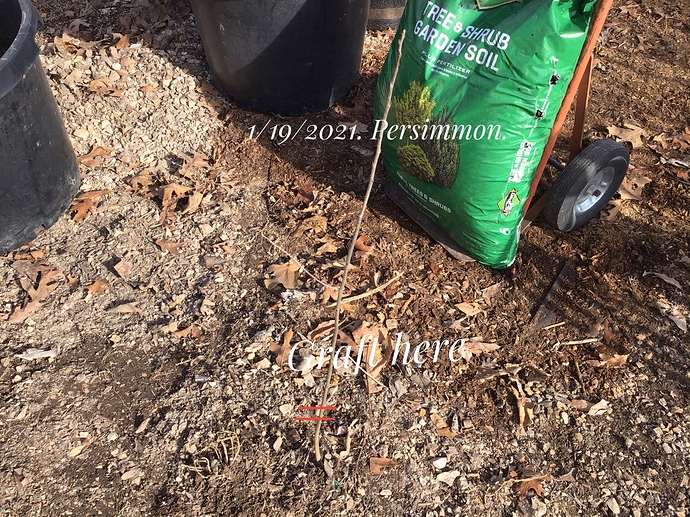 Graft as low as possible is what I do, why? No new growth from rootstock plus young rootstock sap might not be that strong as sap from older branches, besides it make a stronger tree. Some of my grafts are hard to distinguish.

My cleft grafting failing rate is so high and I completely switch to whip and tongue. The key for my persimmon grafting is temperature, I graft them at end of May at 6a. Last year all my grafts took.

For some reason, I wasn’t getting notification for new comments.

Anyway, could I go ahead and take cuttings now and keep them in the fridge until ready to graft in a few months? Or should I wait until later?

Rob,
The answer is yes.
I’m located just north of the KY/TN state line, I typically don’t start cutting scions until February… and often not until early March. They’re fine ‘stored on the tree’, until almost the time that budswell begins to be evident, but I tend not to wait that long.
They’ll keep, properly handled, in the fridge, for months.

Thanks, lucky. Yes, I also start to take cuttings in February. I’ll go ahead and take persimmon cuttings during that time, and refrigerate them until ready to graft. This is what I do with most other types of cuttings anyway, but wanted to make sure that persimmons weren’t an exception.

Just make sure they are totally dormant. For me in 7a is now till Feb 15.