I spent a few hours earlier today picking black currants- at about 45 minutes per quart, it is slow business.

There are still more on there which haven’t ripened yet, but the birds were starting to pick them. In fact, one bird came by while I was picking, but wisely turned around when he saw me sitting on a bucket on the other side of the bush.

This year’s observations:
Consort- Very productive. Got 2 quarts from the first third 3 bushes growing in a hedge (3-4’ spacing) in the 7 years since I planted them. Maybe 2/3 of the berries are ripe. In the past, I’ve found that consort makes a very flavorful jam and is particularly nasty fresh. But, I don’t really like any black currants fresh, so I’ve actually given up on sampling them (too much spitting…).

Ben Sarek- Looking very promising. The plant is very small, even though it is in its 3rd leaf. But it is packed with large fruit. Much quicker to pick than Consort due to the fruit size, though it was almost packed too tightly (like a tight bunch of grapes). Even at just over 1 foot tall, I got almost 1/2 a pint, with a bit more remaining unripe.

Black Reward- Nice growth on a young plant, but not that many fruits.

Blackdown- I remember this one doing better in the past. It doesn’t look like it has that much fruit on it. And it seems like it is ripening a bit later, as quite a few are still green (hence why I skipped picking it).

Edit: I see a bunch of empty strings in the picture. I wonder if birds have been preferentially hitting this bush. That would explain why the yield would look so low…

Goliath- Another mature bush (7 years old). Got about 1 pint, so it is not all that productive. It also has some sort of fungal problem where the berries dry out and rot. I’ve seen this (rot and low production) each year on it and should probably get rid of it.

Strata- Looks to have the same kind of rot as Goliath, except it is worse. A small, open plant which has worse rot will probably not get better with time. I think it was a bit earlier than the others, as there weren’t many un-ripe berries left.

Minaj Smyreu- Ran out of time and forgot to check it out. 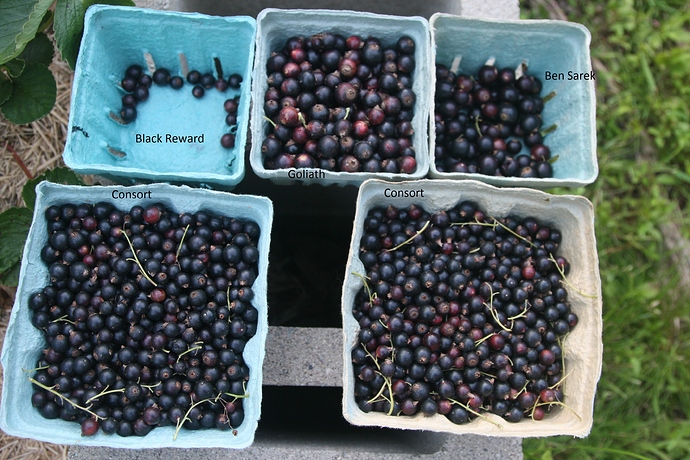 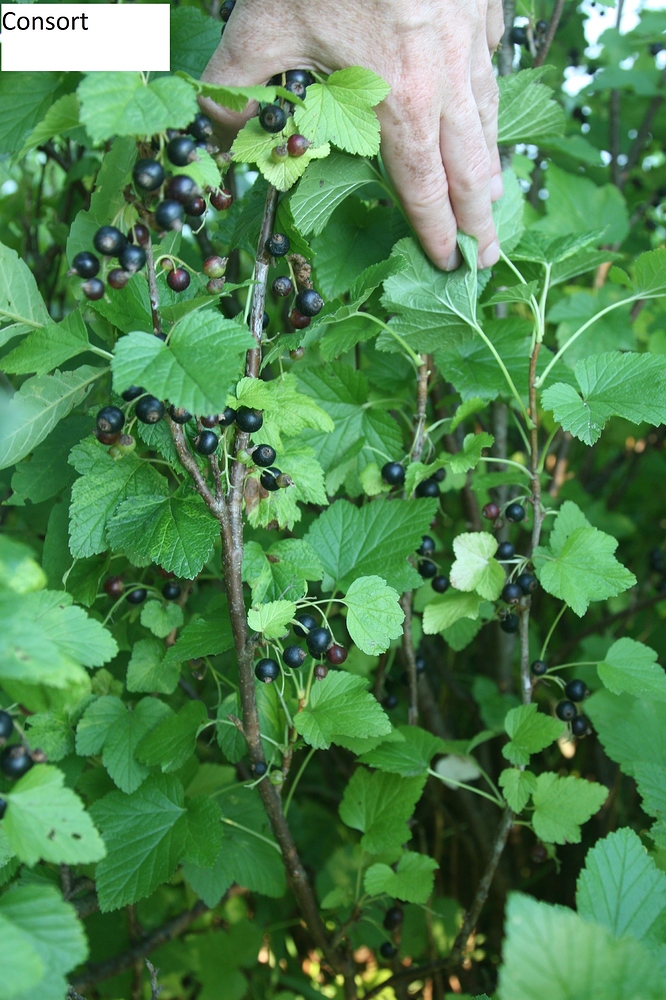 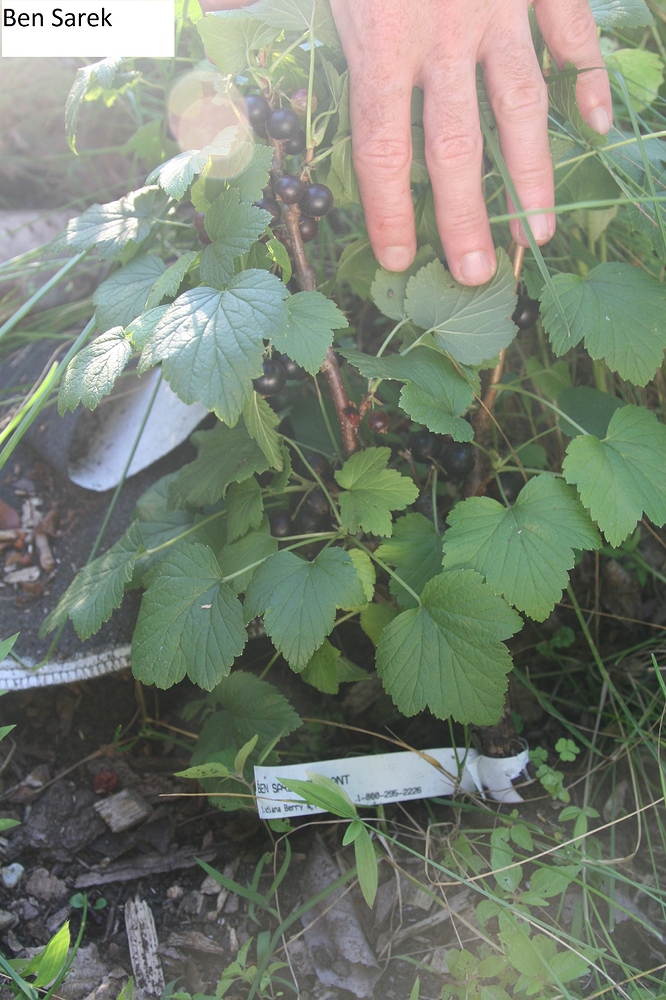 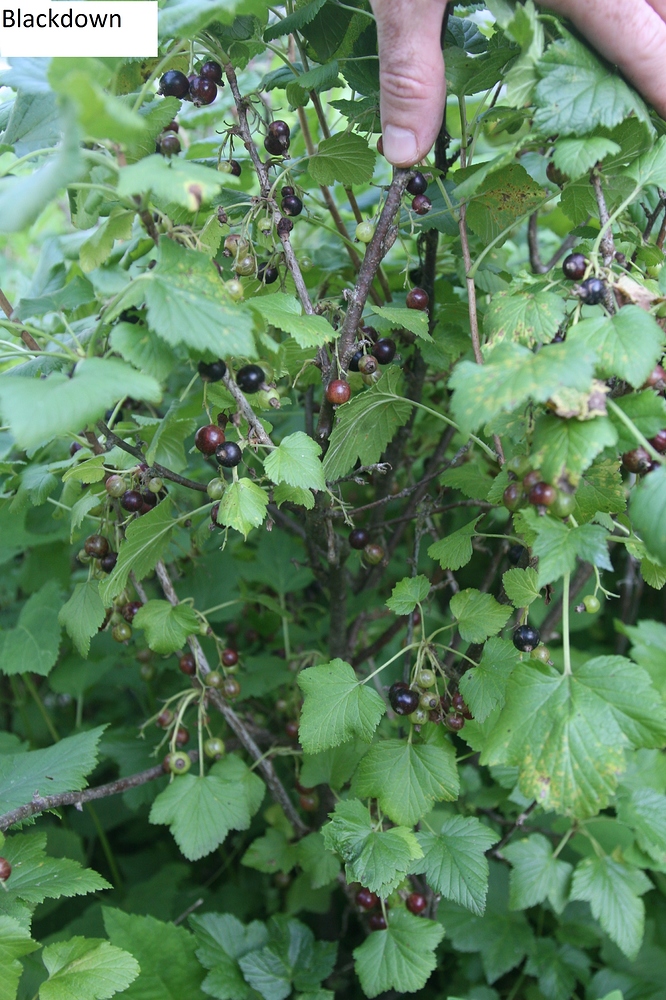 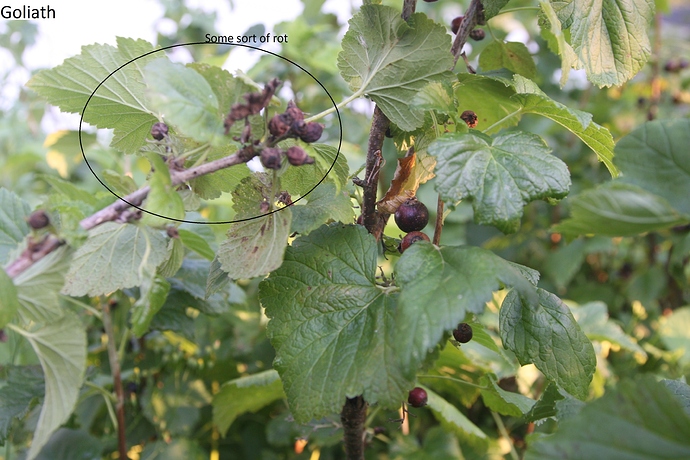 I added clove current or Crandall, some others are called clove too. The berries are different from blacks, it had a few on it when it arrived from Rolling River. As much an ornamental as an edible. Currants on this one can vary in color too. Mine is black, it turns red before being black. To me it is nether a red or a black, but a third type. It is a different species than black which is Ribes nigrum. Crandall is Ribes odoratum.
The leaves are smaller too, I wanted this one for years, about time I picked it up. I would not mind adding other rare currants too, like Ribes aureum. And a few others too.

I have a large crop of black currants this year. There are only two plants but they grew huge for some reason. They really like the soil and the weather of Nebraska I guess. They came from Raintree as bonus plants. One is Ben Sarek and the other one had no name on it. Both were prolific. No name plant has smaller berries and very nasty taste, so it is probably Consort. Ben Sarek has large berries and the taste is milder, but it is still not pleasant enough to eat more than a couple of berries. They were about 95% ripe on sunny side and about 75% on shady side.
This is unnamed currant. 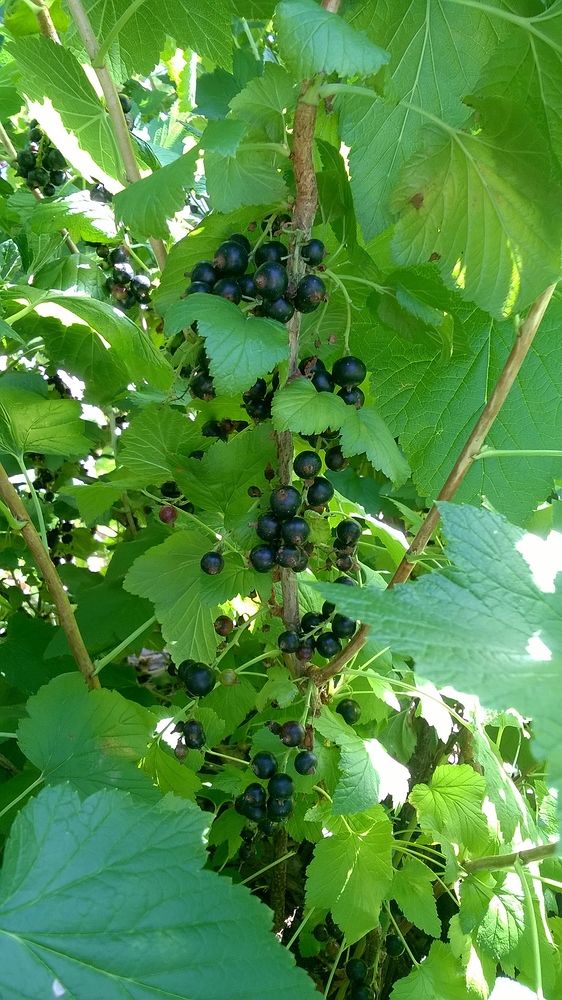 And this is Ben Sarek. 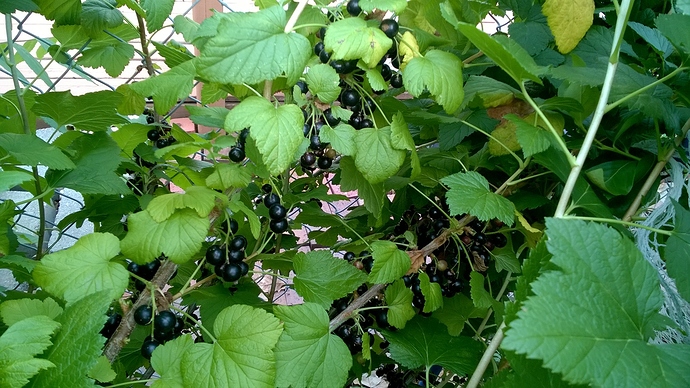 Here are the picked berries. There were 10 pounds of berries and there are more left on the bushes. 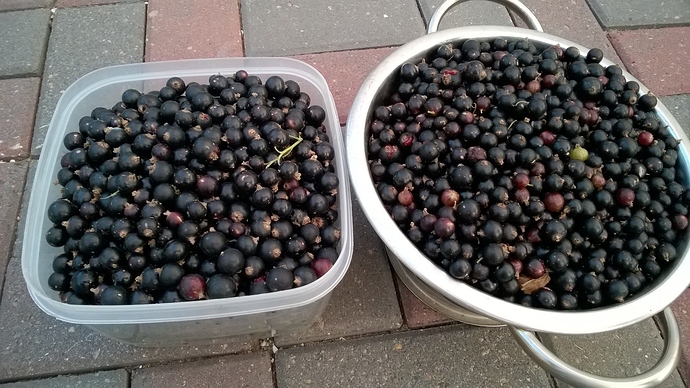 I made black currant jam yesterday and I turned out to be very good, way better than blackberry jam that I usually make.

Also I found seedlings under the bushes. 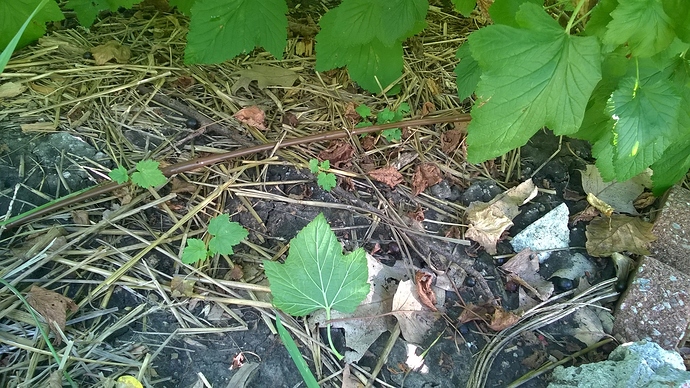 way better than blackberry jam that I usually make.

Yes blackberry jam needs something. I found mixing it with kiwi, and even better blueberries (black and blue jam), makes a more interesting jam.
The Crandall currant does not have that musk taste, better for fresh eating, still tart though!

Most of my black currants are young, some are cuttings from Bob, thanks again Bob! I’m sending out cuttings this fall to others, paying it forward.
I got a couple quarts, enough for a small batch of jam. About what you have Maria pictured.

Great Bob! My Ben Seraks do very well every year . It is a very large currant that makes the best jam. I will start pickin them next week. They are a pain to pick but the end product is super.

No name plant has smaller berries and very nasty taste, so it is probably Consort.

I don’t that Consort is the only one with the super-nasty flavor. Raintree calls Ben Lomond “pungent” and Whitman Farms describes both Black Reward and Consort as having a “Strong black currant flavor”. Titiania is Consort’s offspring, so it wouldn’t surprise me if it is strong too.

they grew huge for some reason.

Interesting that Ben Sarek grew well for you. In year #3, it is <1.5’ tall and is reputed to only get about 3’, per Raintree and is called “Small dense very productive bush.” by Whitman farms. I noticed that the top of the root-crown on mine is out of the ground, so maybe that has contributed to dwarfing it. I’ll cover it over and see if it puts on more growth. I hope so, as I’d like to have enough growth to take some cuttings.

They are a pain to pick but the end product is super.

I just noticed the following on Raintree for Ben Sarek. Maybe next year I’ll try that.

“branches may need support and can be shaken to harvest the crop.”

I got a couple quarts, enough for a small batch of jam. About what you have Maria pictured.

Drew, have you made the jam yet? If so, what did you think? Black currants still have the #1 spot in my mind, compared to all others fruits for jams/jellies. I haven’t been using as much on bread, but I’ve found an even better use. I love tossing a spoonful into a plain whole milk greek yogert. I’ve used up all my black currant jelly and am working on my last jar of Blackberry/Elderberry/Black&Red Currant jelly (also good).

I added clove current or Crandall, some others are called clove too. The berries are different from blacks, it had a few on it when it arrived from Rolling River. As much an ornamental as an edible.

I have a Crandall and the berries are OK. Better for fresh eating than other black currants and nice and large. The bush has pretty yellow flowers, but may not be an ideal ornamental, as it seems a bit floppy.

i just planted the crandall too! should see berries next year.

Drew, have you made the jam yet?

No, but everybody seems to rave about black currant jam. I still have some unripe, so waiting.
On Crandall, it’s yet a little different flavor. I think about blends a lot. What I also like about currants is they so well in partial sun, so the Crandall is in a place that I can’t really put other fruit. I’m hoping maybe some of the California currant species would make good ornamentals. My variegated Elderberry tends to sprawl all over, but it is very pretty. It didn’t flower though this year, or will later?
In Greek yogurt sounds good. I have been making smoothies like crazy, any berry,
I’m trying to use up old fruit! I still have blackberries from last year. Greek yogurt, coconut milk (not the raw, the silk coconut or something like that. All into the ninja smoothie maker. One could use jam too. I like using frozen fruit to make it more slushy or add ice cubes.
I saw a recipe for red currant with Thai basil for jam. Thai basil has an anise flavor or licorice flavor. Sounded different so I’m growing a few Thai basil plants this year.

i just planted the crandall too! should see berries next year.

Keep us updated next year, I’m curious to compare strains, where did you get it from?

i have 2 consort , boskoop giant and titania. all are full of fruit but just starting to ripen up. 3 year bushes.

i got it from honeyberryusa. been looking for it for awhile.

I’m going to make jam and juice by mixing with different fruit. i freeze my berries on cookie sheets then bag till i decide what I’m going to do with them. just thaw what you need.

also got 2 saskatoons loaded and ripening! many of my berries are fruiting for the first time! going to be a busy summer!

all are full of fruit but just starting to ripen up.

That sounds about right for your zone [quote=“BobVance, post:6, topic:11783”]
can be shaken to harvest the crop.
[/quote]

Good to know. I have found that they start to have a little give when squeezed, so color is not much of an indicator. [quote=“moose71, post:10, topic:11783”]
i got it from honeyberryusa.
[/quote]

Cool, mine is from Rolling Hills out of California I think? West coast anyway. Great nursery I got a pomegranate from them too. It’s going to live with my figs. I want more too, a couple dwarfs look awesome.
I have heard many strains of Crandall are around, so I want to see if we can find any differences.

I’ve order from rolling river also. great nursery! honey berry use was a bit cheaper on price and shipping for me and puts out a good product too. let you know how the crandall turns out. had 2 flowers on it but didn’t take.

I just planted belaruskaja BC this spring and its put on about a foot of new growth. Dont know much about propagating these except that its supposed to be fairly easy. I tried hardwood cutting when I got the plant and they didnt take. What way have you guys had the best luck? Should I try to take some cuttings now, fresh softwood, or better to wait another month for branches to get a little more woody?

late june softwood cuttings take the best. very easy to root in peat/ sand. I’ve taken trimmings and stuck around my parent plants and nearly all took! gave to neighbors. elderberry are like this too.

I tried hardwood cutting when I got the plant and they didnt take.

Take those in the fall. Stick in dirt and next spring they should start growing, leave them outside. Not all will take, I tried this with Mulberries and only a few took, but how many mulberry trees does one need? I like to keep them in the shade. I never tried softwood.
Too hot now!

No name plant has smaller berries and very nasty taste, so it is probably Consort.

Don’t like to hear that. I started Consort from cuttings last year. So far it’s about 4 ft this year. I was looking forward to getting fruit until I heard the negative comments. Time to consider an alternative.

I also had a Consort, but it died this past winter. It is always better to have two black currants for excellent pollination. I have been growing currants for over thirty years. Still my favorite.

If used for jam, I don’t think ti will matter, they all have that musk taste, some are just stronger than others.