I grow blueberry plants in containers with 5-1-1 mix, and fertilized last summer / early fall every other week with Jack’s Acid Special (through water). I saw great growth last season, and right now seeing a lot blooms that are starting to fruit. I was thinking of resuming fertilization again, but I read at a few places that fertilizing now at the same rate could promote too much leaf growth that could hurt the fruit production. Is this true? If so, how much and how often should I fertilize until harvest?

Are you more interested in fruit quality or in plant vigor?

Then go very light on fertilizer through fruiting.

Does your answer change for plants that are only, let’s say, 4th or 5th leaf vs a fully grown bush? Asking for my Duke and Blue Crop

If I have a young plant 6 to 18 inches…I my feed it to get it to put shoots up…and not concern myself of a tiny crop that might be inferior.
(Or I might be content to not feed and to get an accurate taste from the first berries of the recent cultivar addition.)

Depends on the person and their objectives at a given point in time.
(Sometimes you can’t have the cake and also eat it.)

That’s what I figured. Thanks!

I don’t understand why fertilizer would cause inferior fruit.

I use an Organic at first and do it very early in the season, like now for me. Mine grow leaves while flowering, and some fruit late in the year. So they need some nitrogen. Soon the year is over so the late fruiting ones are going to get fed with fruit. Since I stop fertilizing after the August 1st feeding each year, I would think by now they will be starving.

IT probably doesn’t in moderation…but apply too much of the “N” and report back about July.

but apply too much of the “N” and report back about July.

Not me. I’ve seen the damage too much nitrogen does to tomatoes.

Well I will say they do not always grow well if not fed properly. Like Chandler is a beast of a plant. Tall, wide with thick canes. But it is very stubborn to make new canes unless you feed the crap out of it. I also prune canes to try to keep them vigorous. This plant tends to lose vigor. Nothing like tomatoes. The leaves are waxy thick it takes a lot of energy to produce them. Very evergreen like leaves. Some of mine hold the leaves until they crack and fall off, still some there now. To me these things produce very well. I fertilize once a month, I’m going to continue doing so. I start April 1st. I’m very happy with the flavor , size and quantity of berries on most of my plants. I do have a couple that are low producers, seems nothing is wrong, they just are low producers. Others have these huge clusters of berries I often think I should maybe thin them?
Toro has the roundest leaves I have seen on a blueberry. It has these clusters of berries all over it. 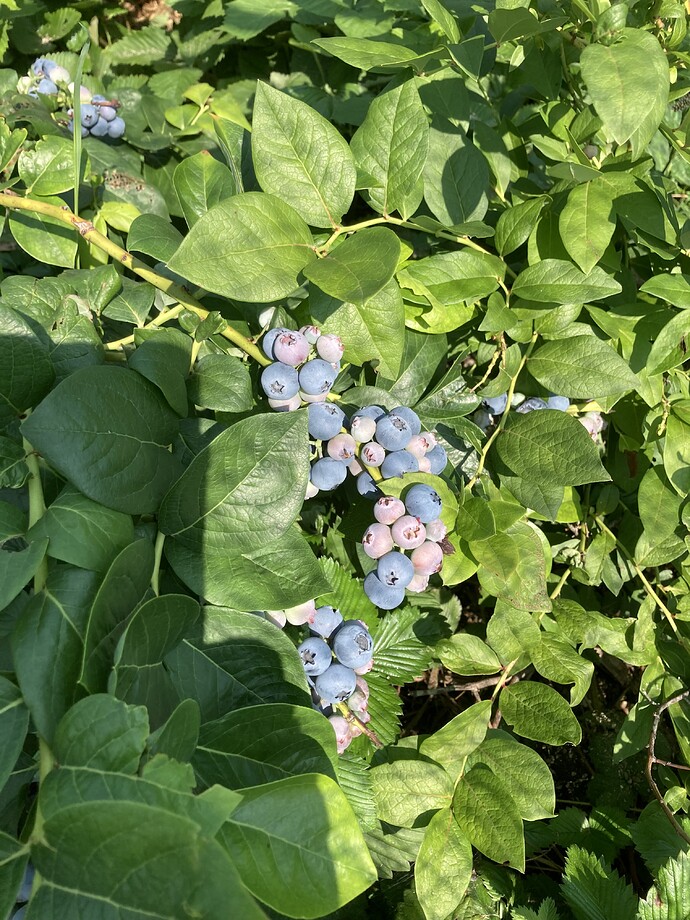 Then maybe switch to low N high PK fertilizer during fruiting? Don’t they need to be fed to be able to produce fruit?

I pruned and fertilized mine about a week and a half ago (hollytone) and added some fresh mulch.

They are budding heavily now but no open blooms yet… won’t be long.

I did that last year too and did not fertilize until after last fruit was harvested. I have 4 varieties and for some that was early July, others late July early August… I did get some new growth, shoots, but not nearly as much as I would like to see them grow.

Should I use something other than Hollytone after fruiting, to encourage more growth ?
Perhaps Hollytone + Blood Meal — I prefer to keep it organic.

My PH wants to head towards 6+ I need the Hollytone to keep that in check.
Blood meal also helps lower PH. I did not know that but just found the info below with google search.

…
Blood meal, which is a slaughterhouse byproduct, adds nitrogen back to the soil in a very efficient manner. … Blood meal will also make your soil more acidic , lowering the pH value. Blood meal acts quickly in the garden to fix nitrogen deficiency and a single application can effectively feed plants for 6 to 8 weeks
…

Hmmm… perhaps fertilize with hollytone alone early spring, then after fruiting a mix of hollytone and bloodmeal ?

Hmmm… perhaps fertilize with hollytone alone early spring, then after fruiting a mix of hollytone and bloodmeal ?

New canes need time to form, young canes late in season often die over winter. At least here. I guess it depends when done fruiting. i have berries still on a couple in September some years.

@Drew51 … down here my blueberries have a good 2.5 months to grow after fruiting. All of last years new shoots are looking good now.

I don’t have any late varieties… my latest ones are done first week in August.

My harvest times vary sometimes depending on the year. So that should work fine then. I do wish at times I had a longer season although by the end of September I’m ready for a break. I added two more this year. I think I have 13 cultivars now. So much better then store bought. I use them all winter too. I’m almost out though. A lot of fun to grow once you understand how to grow them. These plants produce for over 50 years.
As long as growing conditions are right. A dip in production, or growth indicates conditions are not ideal. For me it’s mostly been proper pH, or needing more nitrogen. Often it’s both as if the pH is off, the plant struggles to take up nutrients.

Yeah, I may have a cane or several die…but not sure if due to the lateness of the shoots or if them trying to bloom in December is going to be the reason.

The canes that start early in the year seem to be fine. So I like to feed them in the spring heavy to try and stimulate new cane growth early. And on April 1st when I start the plant has not been feed for 7 months. They have to be really hungry at that point.
I associate the late new canes to late feeding. So again as stated I stop feeding after August 1st. I feed them August 1st for the last time. When I have fed in September I did notice more dieback. Clearly anecdotal though.
Yesterday I pruned some of my blueberries. I removed some older big canes. My plants are big enough where on some I need to use loppers. Again the start of stimulating new canes as after five years canes start to become unproductive. If not removed older canes are pruned back to new growth, Crossing branches are removed, and small dead canes too. Tough to do as older canes will produce, hard to determine exactly when I should remove them. Give them another year? Etc. Also how many active canes to leave. I still have a couple more to do today. I tend to under prune them.