Can they protect our cherries from the birds?

Our area has bald eagle moving in! Am I being realistic?

Bald eagles eat mainly fish, duck, muskrat so the best they’d do for the cherries is scare the birds away for one instant only if they flew by low. But just living near eagles is a treat.

Like Hambone said I think you would have to catch one and chain it to the tree for it to do any good.

We have had them for several years now, had a pair nest at one of our ponds, really cool to see. This is from last year. 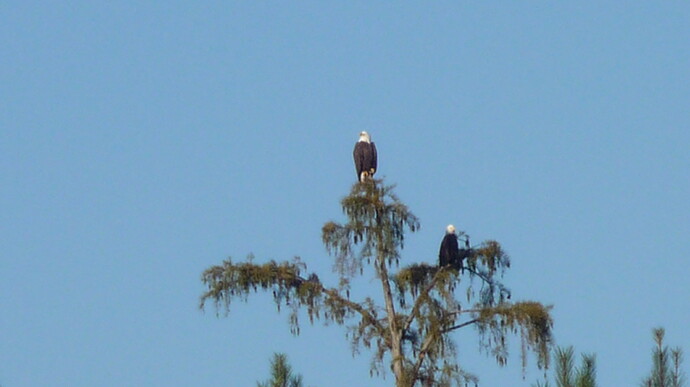 They are moving in near me as well- haven’t seen any on my property but when I was running a short ways away I saw one moving through the trees. I also got my best sighting of one ever about a month ago over a reservoir a mile from my house.

When I was a boy my father used to point out dots in the sky and tell me it was an eagle. He was and avid and very educated bird watcher.

A dot in the sky isn’t too thrilling but that photo certainly is.

There were lots of times I had thought I had seen an eagle but after seeing a real one I realized my previous sightings were wrong. They are much larger than I thought, did you have have that same impression when you saw yours? I spot one maybe once every 3 years and a lot that one summer but it never gets old, always an impressive sight.

I have to respectfully disagree about eagles. We have a larger population around the area and mostly they are found eating dead fish, deer, and road kill along with the buzzards. They are a large bird and impressive on that level, I’ve not ever been too impressed with scavengers.

They scavenge here too, shocks people to see them act like turkey vultures. That’s why Ben Franklin wanted turkey as national symbol.

I grow sour cherries and have ZERO bird problems. Why? I hang red
plastic ‘cherries’ in the trees and leave them in the tree the whole year
around, replacing them as they fade. Also, I put red painted stones in the
strawberries as soon as blooming is finished. The birds peck on the rocks,
hurt their beaks and don’t come back. AND I hang raspberry shaped berry
beads around the perimeter of the red raspberry patch as soon as blooming is
done. It doesn’t work 100% but it helps. Black berry beads do not work
with blackberry and black raspberry and I don’t know why not.

This was posted by Jim Fruth at NAFEX. He’s been saying this for years and I’ve never tried it. I decided to post it here but wonder if I shouldn’t start a new topic on this specific strategy.