Has anyone used cardboard as mulch around veggies?

I have some straw, But my idea was that if I used a layer of cardboard underneath, I could use a thinner layer of straw on top and have the same affect. My concern is, that no water will penetrate the cardboard at all, and some of my more thirsty plants may end up getting too dry underneath it.

I have used newspaper and even paper flooring underlayment before, And in both cases, as long as I cover it with a different type of mulch on top, (straw, bark, etc), it decomposes within 3 to 6 weeks. But that’s long enough to smother any weeds underneath, and it stays pretty weed free after that.

I use cardboard as a base layer under mulch all the time in my garden. Lasts all season and the worms have it mostly devoured till the end of the summer.

If mulch alone won’t do, then cardboard is definitely preferred to plastic or landscape cloth, in my view.

my soil doesn’t drain well so i plant in soil mounded on cardboard then mulched well. been doing this for 5 yrs now and planted dozens of trees and bushes this way. stake your tree the 1st year for support until the roots get a chance to anchor in the native soil.

Your method appears to be a sound plan for damp areas especially with a tree support until it is well anchored. With the tree root elevated is there a need to water more often during the first year or two?

I have done this in the past. In one instance, when I looked under the cardboard found lots of earthworms which is great. In another instance found an infestation of earwigs and many slugs! Could go either ways!!!

Quote (“My concern is, that no water will penetrate the cardboard at all, and some of my more thirsty plants may end up getting too dry underneath it.”)

Quite the contrary !
When water hits the soil ,it moves sideways, much as it would if you wet one end of a paper towel. So the rain will find its way under the cardboard, and keep it from evaporating.
Even when done over large areas.
On a slope , you can place pieces the opposite way you would lay shingles, so it will run under it.
I love cardboard mulch, I use it around newly planted trees a lot , here on the farm. It is very effective , for the weight of material you have to move.
Biggest problem is it blowing around. Becoming unsightly.
I use the minimum amount of , balist ( grass clippings , hay , leaves ,hand full of soil , etc. ) to hold it down,
The less you put on top, for weight .the longer it lasts.
If you get a few good rains without wind, it will stick to the ground and stay there even with out anything to hold it down.
May not be the best look for a suburban yard, but here on the farm I don’t mind the look of cardboard laying around.

I like the shingling idea @Hillbillyhort mentioned. If you tear/slice the cardboard into smaller pieces and layer according to the slope that should work for more permanent plantings to permit water through. (perhaps ground should be watered well first, though)

For gardening application I find cardboard difficult to work with, so I use thick newspaper. Wet the ground. Wet the paper. Cover w/ woodchips to keep in place and add aesthetics. It is easy to plant through wet newspaper.
Sage and Basil in foreground, beans in adjacent bed in background. GREATLY reduces weeding and looks tidy. 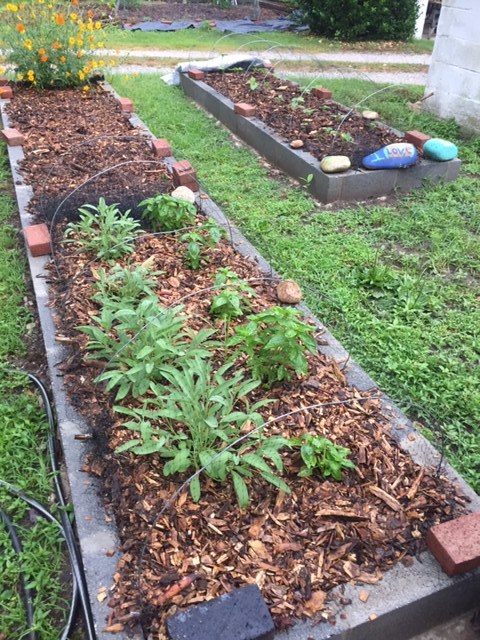 no. not really. only enough to get established. the 3in. thick mulch holds the water at the roots. i replenish the wood chips every spring. my growth rate has doubled growing this way as opposed to planting in ground and is also a lot less work. digging in my soil is a nightmare! after 2-3 yrs the pile flattens some as the roots spread out and the soil mound breaks down but the tree vigor remains the same.

i collect and use newspaper as well. works just as good as the card board and is easier to manipulate the shape of your plantings

Anything to conserve water and suppress weeds so the garden plants get all the nutrients is good. We use cardboard, paper, etc…One thing i will caution you about is using cardboard that has slick nice graphics because its almost always toxic. Anything with excessive ink on it is not the best.

same for newspaper like fliers in the mail. the glossy ones are no good. reg. newspaper works best.

Biggest problem is it blowing around. Becoming unsightly.

Agreed. This is the main issue I have. I either put some wood-chips over it (but not in a garden area which isn’t already covered in woodchips) or rocks. The rocks can be a pain, as I trip over them later, long after the cardboard has decayed away. And not using enough results in me finding cardboard blowing around the yard.

I try to find the biggest pieces possible. Each time there is a seam, it is one more point where a piece of cardboard can shift and weeds can come through. It also means another rock, log, or pile of chips to secure it, which is a pain. I’m always on the lookout for big cardboard. The boxes that house siding comes in are good. I also liked the box a full size water heater came in. But getting this size on a regular basis is hard.

I use junk mail, cardboard etc any products that use nature material to put under the tree to control weeds, grow earthworms, and recycle to reduce the trash. I usually put a pile of junkmail / expired magazine etc. outside for a while, let the rain soak till they stick together before I spread them under the trees. Wind will not blow them away

stores like sears that sell appliances have lots of big pieces.

it is one more point where a piece of cardboard can shift and weeds can come through.

In my mind’s eye I see heavy overlapping. If heavily overlapped (good idea) a little shifting won’t matter and 1 rock/brick can secure many pieces, as each piece holds another down.
If your soil wicks well there is no concern guiding rain runoff away from the tree. Before I used tarps to keep soil from getting too soggy before planting, I used cardboard. And that kept it pretty dry, even in our abundant rain situation. So my only concern with not shingling and poor soil wicking is that extra irrigation may be needed.
But all cardboarding is local, LOL.

I have also found the blowing a problem. I also use pieces of carpet to kill sod for new garden areas of former pasture. The wind has even picked up 4 x 5 foot squares of wet carpet at times, although they don’t move that far compared to the cardboard. My first attempt with cardboard was a disaster. Clumps of dirt helped hold it down. Now I only use cardboard under wood chips.

I like cardboard most for new areas or spots in the orchard where i want to plant something later, covered with whatever is available - hay, grass clippings, old corn stalks, weedings from the garden. I’ve gotten lazy a few times and not removed the tape but found it’s a whole lot more irritating pulling pieces of tape out of dirt and mulch later. Unfortunately our ants really love cardboard! So I don’t use it often for mulch after planting. Have occasionally used it on a particularly weedy path in the garden. But covered with hay (which is what i use for mulch) it can be quite slippery when dry . Thankfully when discovering this I landed in the pathway and not onto the bed of growing plants. Sue

I have a Question about straw - as a weed preventer. Not ‘feed straw’, but the ‘bedding’ kind. We ended up with a bale of straw, because we used to use it for our ducks. We got tired of looking at the straw, so we mulched a few of the pomegranates with it. Kept it clear of the trunks. I also have a big block of cedar chips - (from Wallmart pet department). I tried spreading this in a flower bed, as an experiment.

Is it OK to use these as mulch? Is the cedar harmful for fruit trees?

The straw seemed to really block the weeds. Holds together well, once wet. Stays put.
I was surprised. I thought I’d be seeing it blown all over the property . . . but, no, it stayed where I put it.

I’ve got my work cut out - keeping the grasses from creeping into the ‘circles’ where I’ve planted all of the fruit trees. And the weeds are horrid. I’m going to read the rest of the ‘Mulch Posts’ in this thread - and see if anyone has any other ideas.

All suggestions - appreciated, as always. - Karen

I’ve used both in the past and they both work fine. cedar won’t cause harm unless it contacts the tree or roots directly. i don’t use it anymore because i want it to break down every year to enrich the soil. cedar mulch takes like 5 yrs. before it breaks down, but if you want it to last , use it. cedar also repels bugs because of the oils in it so it adds some protection when its fresh cut. makes the yard smell great too!