Below is a picture of a 24’ x 12’ x 7.5’ arbor partitioned into four sections by crossing bracing boards. The arbor was built in spring/summer of 2011 with frame boards fastened to Red Cedar posts. Picture was taken before placing crossing wires for vine support.

It was built over a preexisting second leaf Concord vine which you can see in the lower right hand corner being near the center of the arbor. Also, it was built over two nursery rows of seedling/grafted apple trees.

Although the recommendation is to not plant the vines until the arbor is completed, I decided to plant four vines after placing the posts to take advantage of not having to wait until the next winter/spring. The varieties planted was Summer Royal, Black Monukka, Thompson Seedless and Venus.

Shortly after planting, I realized the probability was that I had made a mistake in selecting the varieties. So I ordered cuttings from Bunchgrapes http://www.bunchgrapes.com/ selecting the Jupiter, Reliance, Swenson Red and N.Y. Muscat varieties. After receiving them, I set them out in small pots according to instructions on their website.

It ended up that I was fortunate that I had done this as the varieties that I had planted at my arbor died in the next year or so. It likely was because some of these varieties were not hardy enough for West Tennessee’s winters. Also, they could have died of Pierce’s disease https://www.plantmanagementnetwork.org/pub/php/research/2008/pierces/ although it is rare at my location. Other than that, I don’t know.

I replanted at the arbor beginning in early spring of 2013 with three Swenson Red vines, two Reliance vines and one Jupiter vine while keeping the Concord vine. They are doing fine although I believe that I have too many vines for this arbor.

This being my first arbor, it would be fair to say that I did not know what I was doing. 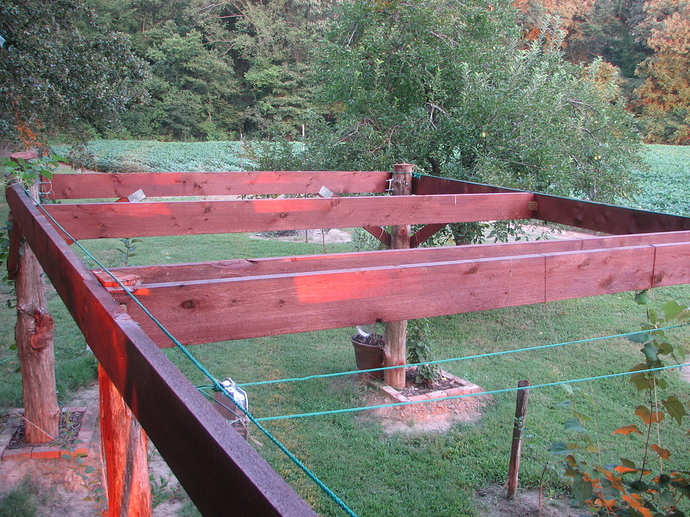 Because the strainer could not fully tension the wire thru the eye bolts, I used a come-a-long similar to this one https://www.amazon.com/Maasdam-144SB-6-Capacity-Power-Pull/dp/B00004Y68X/ref=sr_1_13?s=hi&ie=UTF8&qid=1471985719&sr=1-13&keywords=come-a-long to increase the tension starting by tensioning the middle length (seven eye bolts on each side - so seven lengths) thru the eye bolts. After tensioning a length and removing the come-a-long the wire would not slip back thru the eye bolts. Then I continued on tensioning each length until the last one and then taking up the slack with the strainer. I then did the same for the other side of the middle length.

I have not had to adjust the tension since.

Notice that I painted my arbor including the posts a reddish color of some hue. It was already red. I thought why not. I don’t know if folks commonly paint their grape arbors or not. Don’t guess it makes much difference because once its covered with vines and leaves not much of it can be seen anyway.

Also, notice the seedling/grafted apple trees underneath the frame board and the second leaf supposedly Winesap tree. 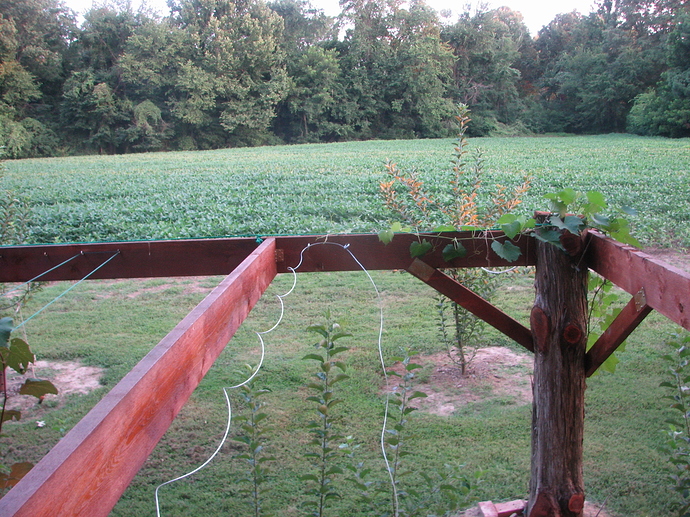 Well, here it is 5 years later with about the same camera angle as the first picture. Can’t see much of the arbor except a little along the side. If you are able to zoom in you can see the washers and nuts that fasten the eye bolts to the 2 x 8’s.

Except for the June Beetle damage, the vines looks healthier than the big Yellow Delicious apple tree. Don’t know whats wrong with it. 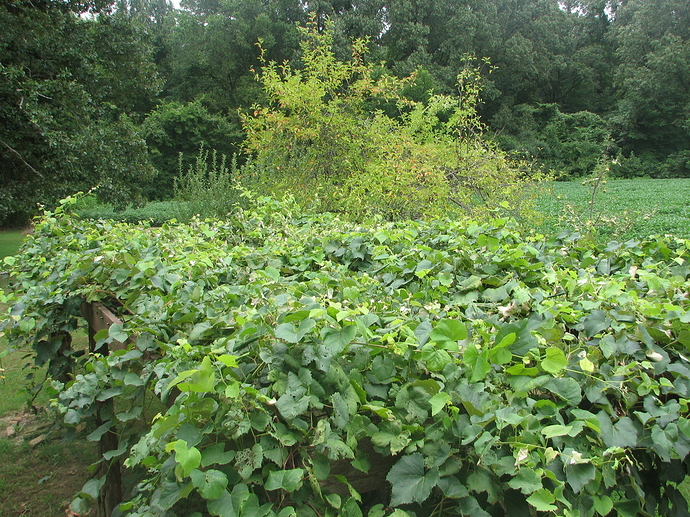 The picture below shows the corner where the blueberry shrub was (and its still there - just can’t see it very clearly) in the first picture. The fence strainer can be seen by the frame board.

This is a Reliance vine that was spur pruned last winter. One of my weaker vines. It forks into three cordons (or arms) with each being about 4 feet in length. One is along the far frame board, one diagonally thru the arbor and the last one along the side frame board (toward the camera). I try to have up to about 12’ of cordon length on each vine. 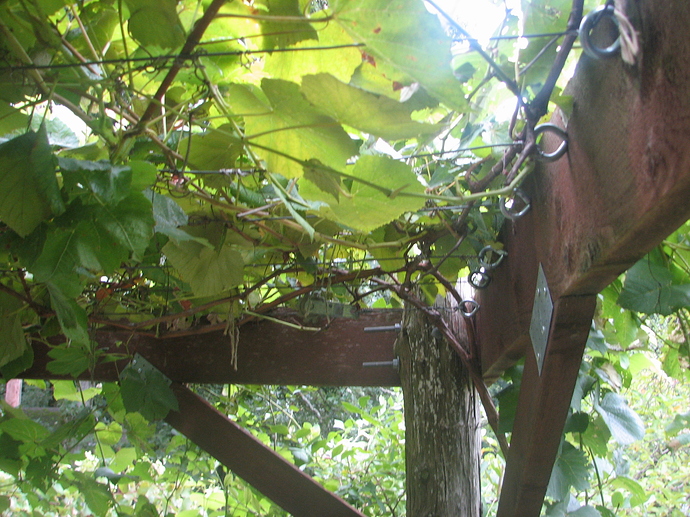 Below is picture showing the two center braces. These are Concord grapes that have been picked over by the varmints and myself.

If I was building this arbor over again, I would consider using 2" conduit galvanized Steel pipes rather than the 2’ x 8’ Cedar bracing boards. Reason being that when spraying it can be difficult to get the spray on the side of the clusters facing the bracing board. Then the insects attack that side. It would improve the air circulation and sunlight penetration. Also, sometimes the grapes will lay on the top of the boards making them more of a stretch to get to. I don’t know much about conduit pipes or how well they would work as bracing members. I know the stores sells them in 10’ lengths rather than the 12’ lengths that would be
needed for this arbor. 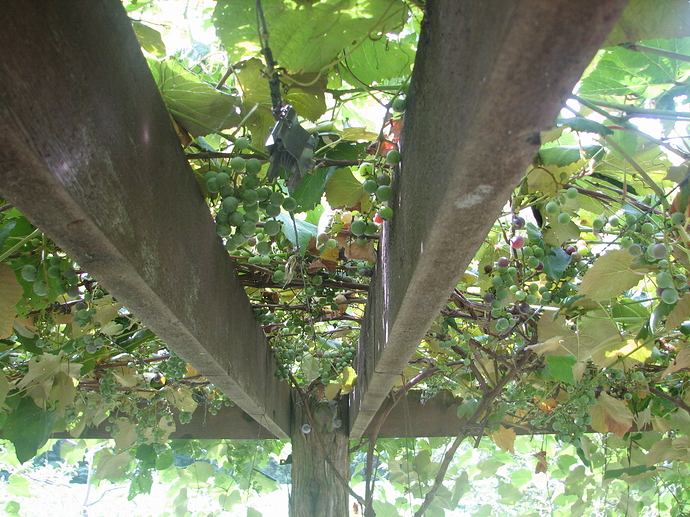 View of arbor showing electric fence. Got to try to keep the varmints away by zapping them!

There has got to be at least 95 thousand different designs to build a grape arbor. Some may be for you. Some may not. My guess is that they are all fun to build.

Hopefully this post will be a help for folks that are planning on building a grape arbor/pergola. 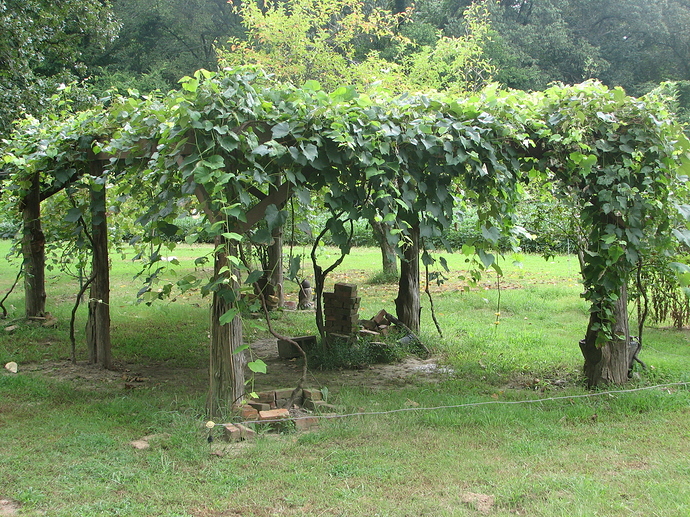 Thanks for the compliment.

That’s awesome. I think I need one too !

That’s a really nice arbor. Looks beautiful. Thanks for sharing - now I want one like that too!

The arbor would have been much nicer looking if I had used 6"x6" dimensioned cedar posts instead of the cedar logs that I used.

But… at $100 per post at the lumber yard I decided that the free cedar logs was a bargain!

Once the grapes climbed it you don’t even notice what the construction is, your just looking at the grapes anyway! They almost look like giant grape vines. Did the bark peel off on you?

Yes, the bark eventually does peel off.

Those cedar logs are 11’ feet long placed 3.5’ in the ground. I can remember how relieved I was after finishing hand digging all 6 holes. Whew! We used a front-end loader on a John Deere 4020 to place the logs into the holes.

Just yesterday I pruned the one vine on the arbor. With the wires at about 7’ high I can easily reach (I am 6’ 1") the vines for pruning. I can imagine the difficulty that folks have pruning the vines on the architectural designed pergolas with the 2x8 rafters.

I see that you are located on Michigan’s upper peninsula. Must be really cold there in the winter. Do you already have some vines?

Actually I just moved to Northern Kentucky this past week. Need to change my profile I guess!

It was -6 when I left MI last Tuesday and 70 something when I arrived here in KY. Not bad for my first day here!

I had planted grapes last year in MI, so I did have a few vines. We had built a pergola for my hardy kiwi up there, but we moved so I won’t know how they turn out. I’d like to start over again, but I like your idea better. I noticed someone a couple miles down the road has one very similar to yours but it’s made of pipes for supports instead of posts. I like your logs better, it gives me lots of ideas. We have a ton of black locust here that can be cut, so I have the posts available.

Before we left, we did 20 acres of cedar log post fencing. 8’ long posts - but we had a tractor mounted augur to do the hard part. I don’t envy the work you did, but it came out great for you in the end. Worth it I’d say!

Hi Elle! See that you are a new member here. Welcome to the forum!

You do not know how thrilled I am that you like my grape arbor and included it in your article. Just wished I had cleaned up the bricks and such before I took the picture. Not all of my grape vines died, I still have one Concord vine on it that’s right in the middle. Really big arbor for one vine though. I am planning on planting a muscadine vine in one of the corners this spring.

Actually I got the basic design for this arbor from a South African website back in 2010 that I think is now defunct. If I remember correctly it was called “The Grape Guy” or something similar. At the time I was looking for a design that was highly functional for grapes without being necessarily all that architecturally pleasing as you see in most of the pergolas. Sam

Looking again at your last picture, it looks like you have a nice orchard of grape trees. Fantastic.

Thanks Sam! I love the Muscadines, mine definitely outperforms the other types, although I can’t seem to help buying different varieties. Don’t know what’s with that, but I’ve got something with collecting one of every type of fruit. I guess everyone needs a hobby

I agree, there are many trellises you can just buy but they all look like they’d cave in after a year. We like to build things from hardwood and strong stuff - build it right, build it once!

Anyway, thanks again and happy to be a part of this forum, it looks great!
Elle

Looking again at your last picture, it looks like you have a nice orchard of grape trees. Fantastic.

At the time of the picture I did. Unfortunately the Jupiter and Reliance grapes died of Pierce’s Disease.

I guess everyone needs a hobby

Right now with COVID-19 it seems like its more than a hobby.

Where are you in the tropics? Just curious. I would think that muscadines like the tropics. Don’t they like heat and humidity?