Seen some chinese chestnut trees for sale up the street. What do they taste like. Are they worth growing?

They’re getting ripe and dropping …. try a few. Somebody must have a tree in your vicinity.

American ones are mostly dead and chinese is just getting a foothold. Have not seen any in years. Are they any good or is it something that just has a minor following?

My mom has a Chinese one in front yard. It was planted in 1977 but was in the shade of a mimosa and a silver maple quite a few of those years, so only recently has it had a good crop.

Then, I picked a couple pods just splitting from a tree down the street from where I’ve been working. Haven’t eaten a chestnut nor a black walnut yet this year, but expect I will soon.

What do they taste like? (A chestnut.) I can’t think of anything close. I would guess an unroasted cashew or even a swiveling brown jujube might be ‘in the ballpark’.

I googled the taste the other day and the most common response is sweet potato. I like sweet potato, but seems if they were great more people would be growing them. Or maybe the litter deters a few. They are super cheap and I read they fruit fast, so may try for fun.

Sweet Potato? Hmm, not sure about that… But, perhaps that comparison is made because they’re different tasting than most other nuts. Why don’t more people grow them? Maybe for the same reason that people don’t bother to gather black walnuts. There are a lot of those trees in my neck of the woods, and the majority lay on the ground. Do those same people pay the high price to buy them pre-shelled from the grocery store? Or are they clueless what they taste like? I wonder…

I had two chinese hybrid chestnuts at my prior place. I have eaten european chestnuts dozens of times, and I was pleasantly surprised at the taste of the chinese hybrid. Flaky texture, slightly sweet, I recommend them.

Do you recommend them enough to take the place of an apple or pear ect. that would normally go in that spot? Aside from eating it myself I am looking for oddities that would sell at farmers market. Have not seen chestnuts there. Not sure if they would sell, but willing to try if they taste good. Thanks.

sure, but one chestnut occupies the place of 3 large apple trees. even though chinese chestnut trees are smaller than their american and european counterparts.

Well that is good to know. I have a semi shaded area that is worthless for fruit. Maybe I will try them there and just accept less crop until they can compete with the other trees.

Actually, Sweet Potato is accurate………provided you eat the sweet potato raw like you eat the chestnut raw!!!

Thanks for bringing that up.
(I’ve not actually eaten a raw potato in a few years…but did many a time as a child…so I know what they taste like).

Chestnuts were for sale 2 days ago at Berea KY farmers market.

Yet another 40 year old tree still going strong? That makes me happy. A lot of my trees are standard and your stories confirm they should outlast me. So you second that chestnut are worth growing for food? Are they as good as walnut and pecan in taste?

Are they as good as walnut and pecan in taste?

To me the taste is different. The raw sweet potato comparison is pretty accurate. Chestnuts have a higher carbohydrate level than most nuts.

Chestnuts are worth growing, but you should try eating one or two before planting more than one tree of them. That’s pretty generic, but it applies to someone who has never eaten a pawpaw, a jujube, a honeyberry, a quince, persimmon, or what-have-you.

I’d grow 3 pecans, 2 black walnuts, a hickory and a chestnut if I had space…but that would be based upon my taste preference for them. As far as selling them, anyone with a chestnut tree probably has more than they can personally consume already. And the public who has not tasted them will be a bit reluctant to buy a bag full of something they don’t know.

Still, if I were setting a display at a farmer’s market…which I’ve not done in about 25 years…the bigger the selection of stuff, the more likely you are to go home with money in your pocket. (But, also, some left over items you didn’t sell.) I sold all the cushaw squash I could take one fall…because nobody else was selling any.

for pollination, it is always best to have two. Unless they are grafted with another variety.

BlueBerry I think you are right. Most people have never tasted them, so selling them most likely will not go well. Think I will stick with my quince idea for oddities at the farmers market. The chestnut plants are cheap and I have a shady waste spot that I may still put some in for myself. Have not eaten one since I was a kid, but I remember a biscuit texture with a dry sort of sweet taste. In full sun they are production machines though and one of the quickest nut trees to produce. Thanks for your advice, always useful.

My favorite nut is chestnut. 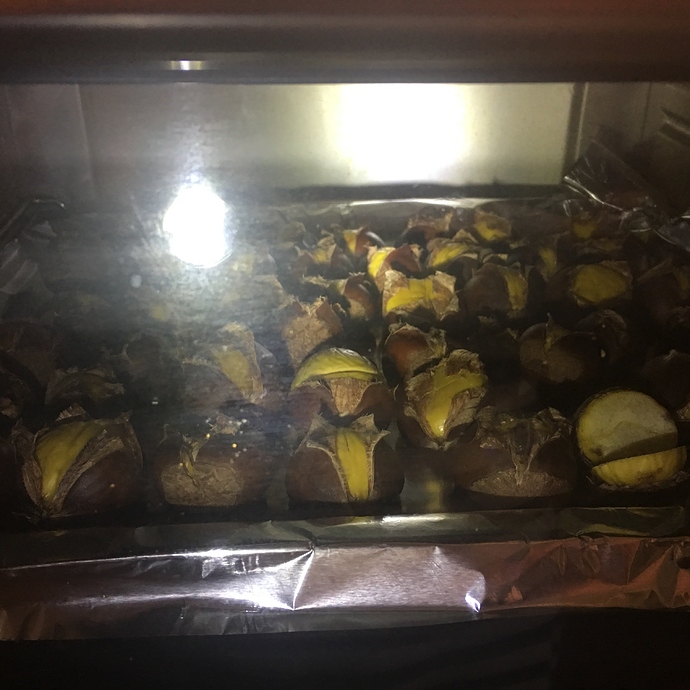 They taste much better when cooked at lower temperatures for longer periods of time without cutting the shell. Boiling is much better than roasting.

Chinese chestnuts taste mostly starchy with a bit of sweetness and a light nut flavor, to me. My uncle liked to plant chinese chestnuts in habitat plantings/CRP. I usually have a coffee can or so of them a year and that is enough.

If you have a large immigrant population in your area from Asia or southern or southeast Europe then they can be a cash crop. I think they have food traditions that include chestnuts more so that the vague and nebulous “chestnuts roasting over an open fire” notion than Americans have.

Chinese chestnuts have 2 major downsides. The biggest issue with them is that 1-4 nuts are produced in a apple to grapefruit sized bur that is made up of about a thousand needle-sharp spikes. Those all fall on the ground in the fall when the nuts are ripe. The second issue with them is that they flower in the early summer with a scent similar to that of callery pear.