While touring Hood River valley orchards, I noticed the apples and pears are completely insect free. I asked one grower what they use for control of codling moths. He said they use these pheromone traps to attract and confuse codling moths. I would like to know if any home growers have experience using them? Let’s hear from you if you have
Dennis
Kent, wa 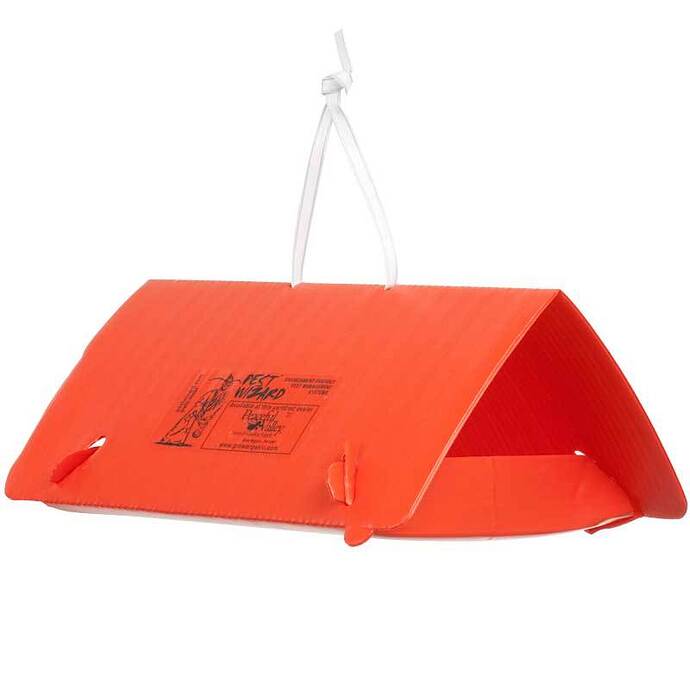 Use this trap with pheromone lures. This trap can be re-used for several seasons with replaceable Messy-less Adhesive Liners (PIT564).

I think @scottsmith has some experience with this. I use a pheromone delta trap to alert me to when the males are active, but I don’t think it serves to confuse. One year I did hang pheromone strips that were supposed to confuse but didn’t notice any improvement. It may have worked better if it weren’t for the fact that there are so many untended trees.

I used these Delta traps with lures and sticky liner last year and still had a lot of stings. When I checked sticky card I found a many mangled remains of flying insects but could not specifically ID coddling moth.

This year I used a bug-buster type of blacklight that I picked up at a thrift store. I left the light on for 3 hours at dusk from July1-August 30. This year I had no stings at all… but, of course, can’t be sure that the blacklight is the reason.

I know that before the advent of pheromone lures, UV lights were used as a coddling moth lure. The downside, and it’s a considerable negative, is that not just coddling moths are attracted to a blacklight. I probably killed a lot of other moths in that 2 month period.

I will probably use the blacklight again next year to see if I still get no stings.

So Mark,
What do you find most effective? I usually have good success with Surround, but this year oddly my Chehellis variety would not allow the spray to coat each apple, so codling moths had a ball!
My other trees no problem
Dennis

I think what has worked best for me is Spinosad and Sprectracide’s Triazicide. I like to use Triazicide for the first generation spray, followed soon after by a spinosad spray. On the second generation I do the same, and on any later generations I just use spinosad, two sprays spaced four days apart. I’ve been known to mix them both in the tank. I used Surround one year but just didn’t like working with it, didn’t keep it on the fruit well enough, and didn’t like even working in the tree when it was on!

This year I decided to switch out to Malathion and it was a disaster. I don’t know if my timing was off or if it was the Malathion. I suspect that next year I’ll go back to my old routine and hope the bugs don’t get too used to it.

I like to use Triazicide for the first generation spray, followed soon after by a spinosad spray. On the second generation I do the same, and on any later generations I just use spinosad, two sprays spaced four days apart.

Tell us more about that blacklight?

Stephan Sobkowiak uses molasses traps… i plan on using the same once my trees mature more. 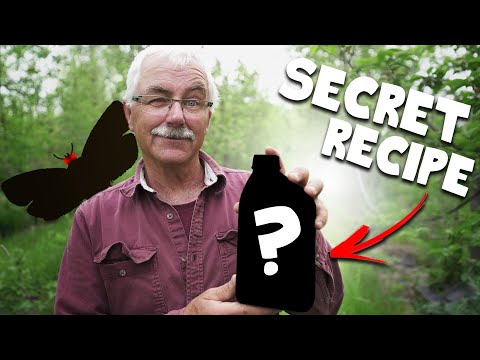 This is the blacklight. 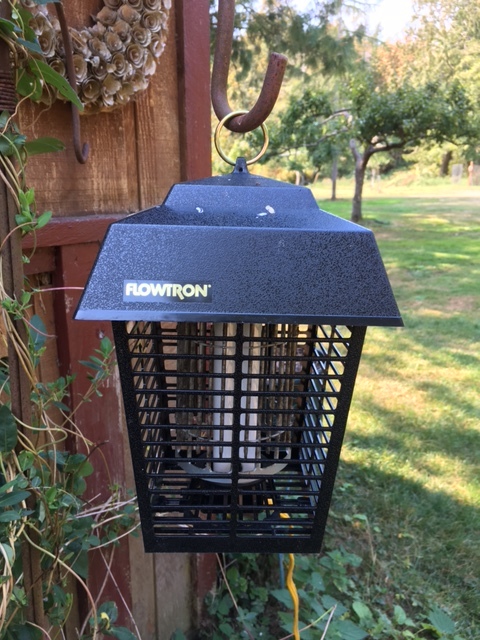 Heard a lot of zaps when it was on from 8pm to 11pm. Found plenty of moth carcasses, no bees. I did not ID the moths.

I see what looks like that unit on Amazon for about 65.00: https://www.amazon.com/dp/B09131QBPC/ref=sbl_dpx_outdoor-bug-zappers_B01F1TGEOK_0 Does that look like the same thing to you?

I see they are advertising it for mosquito control and include an attractant. Did you use pheromone attractants? I know you mentioned them in your post.

Thanks for your help.

A “bug light” like that will likely kill any insect indiscriminately, if it’s attracted to the light. I assume all moths would be attracted? Besides Coddling Moth, are all other moths also “bad”?

I totally agree …and was the reason it hesitated. Yet putting out molasses attracts nectar-loving insects and label on Trizicide says its “fast-acting formula that kills 260+ listed insects by contact.” So lots of bad choices.

I’d guess the pheromone attractant probably was for mosquitoes. This used one ($15) came without pheromone.

Hi Christine
“I used these Delta traps with lures and sticky liner last year and still had a lot of stings.”
I am a little confused when you use “stings”, I often describe Apple fly maggot infections as Stings, but with Codling Moth, the exterior and interior looks more like a full blown infection as in below pics. 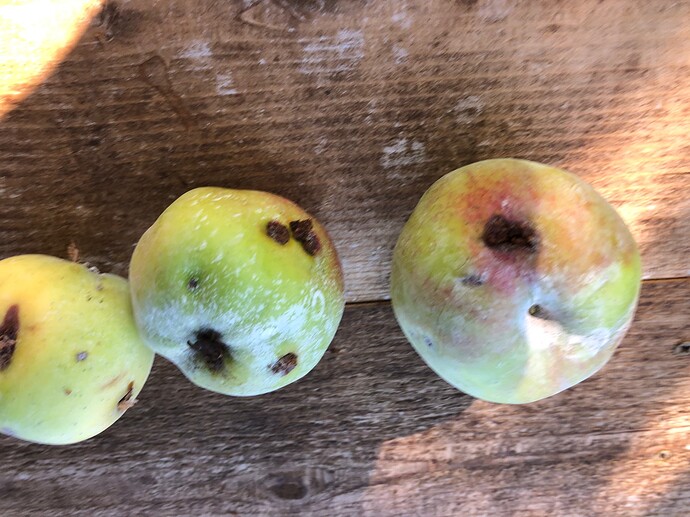 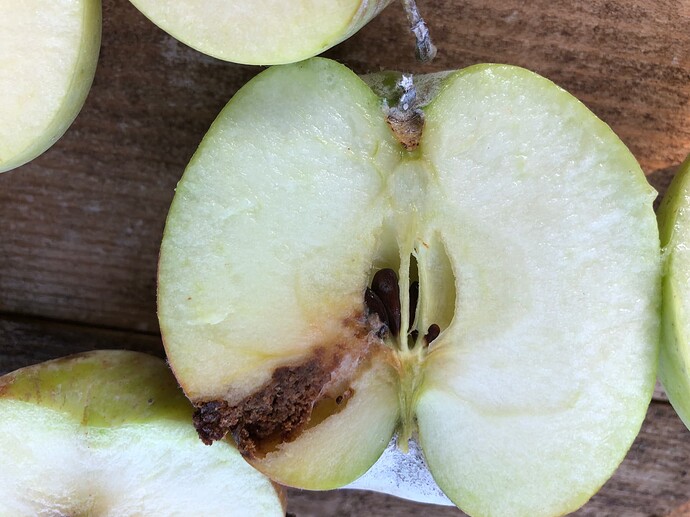 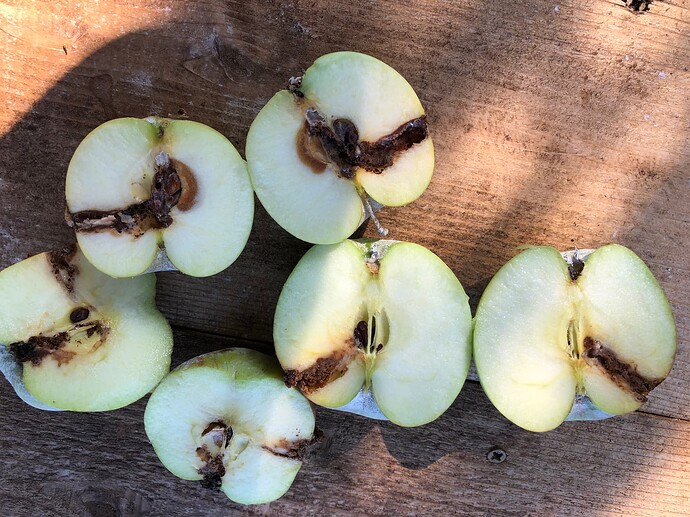 image1920×1440 368 KB
In the last pic I show a closeup to show no evidence of apple fly maggot, so somehow my surround has them controlled but certainly not the codling moth.
So are we referring to the same type of infection when you say stings?
If so you may be on to a good solution for me to try.
Please explain
Dennis
marknmt September 9, 2022, 11:30pm #15

I use the term “stings” referring to CM infestation too, but that is a superficial scar, which happens, I think, when the just-hatched larva dies from poison before getting very far. Those are ultimately not very important -just little “stings”. But the tunnels pretty much ruin an apple.

I am using the word ‘stings’ similar to the below description from UC IPM. I think the evidence of frass is a good superficial distinguishing characteristic between apple maggot damage and CM damage. The interior damage on your apples does look like CM.

Codling moth has the greatest potential for damage of any apple pest, yet it can be effectively controlled with properly timed treatments. It causes two types of fruit damage: stings and deep entries. Stings are entries where larvae bore into the flesh a short distance before dying. Deep entries occur when larvae penetrate the fruit skin, bore to the core, and feed in the seed cavity. (from https://www2.ipm.ucanr.edu/agriculture/apple/Codling-moth/#IMPORTANT)

The use of UV light was common in 1965 for CM control:
https://calag.ucanr.edu/download_pdf.cfm?article=ca.v019n10p6 CYD-X HP contains a virus that is specific to larvae of the codling moth (Cydia pomonella). Unique opportunity for biological control of codling moths.

might be something others members have had experience with.

If you check the Guides Category, Scott has posted about his low impact spray that include several products you guys mentioned here.

Thanks Christine,
How far from your apple trees was the lamp positioned? And did you use any pheromone attractants? How close do moths need to be for effective killing?
Dennis
Kent, wa

The UV light was probably 50-200 feet from various apple trees. I didn’t use any pheromone attractants. Even though all my apples look clean this year, I really don’t know if it was because of the light.
A neighbor a mile away complained about the CM and maggot damage to his William’s Pride apples. Another neighbor brought over some Gravensteins that were very CM damaged. So I imagine CM were flying around my place too.

I think you have found something worth knowing, I will definitely be plugging one in next spring about as soon as my fruit comes out of blossom and sets fruit. Thanks for letting us know. I will still need to continue with surround to assure apple fly maggot is controlled, but this is much better than using chemical if it really works.
Dennis
Kent, wa