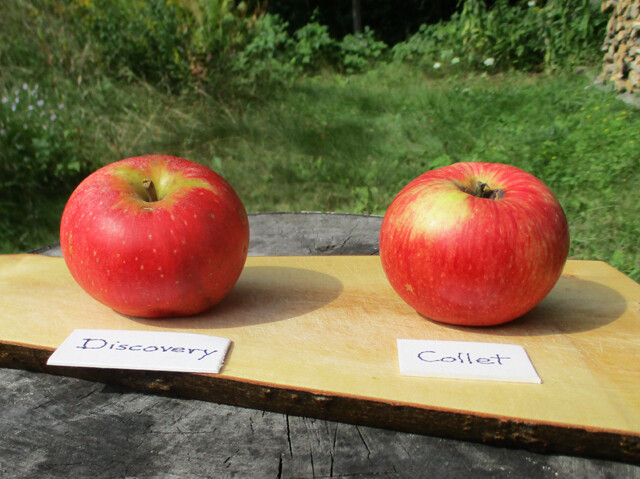 Collet (the one on the right in the photo) was one of a number of “firsts” apples for me this year and one I was really looking forward to as I hadn’t heard too much about it. It was a lone apple on an unknown commercial rootstock grafted three years ago, scion from ARS-GRIN. It is reported to be a late fall apple so I was disappointed when it dropped end of August. It had some damage around the stem but otherwise was a very clean average kind of apple, medium size 4 oz.

Let it sit for a week then ate it. Seeds dark brown so appeared ripe. Flavor disappointing to me, husband thought it was good. He likes Macs, I don’t - it was quite Mac-like. Juicy, tart-sweet, tender flesh. Several online recommendations say not to pick it too early, that it sweetens with frosts, so I have bigger hopes for future crops. Though to be sure even this early first apple was a nice one. Sue

(P.S. The Discovery on the left in photo was a BIG winner - will report on apprpopriate thread).