I am going to grow some of the less hardy Kakis in the containers and over Winter them in the shelter. Check out some of the photos below of successful fruiting Kakis in containers. 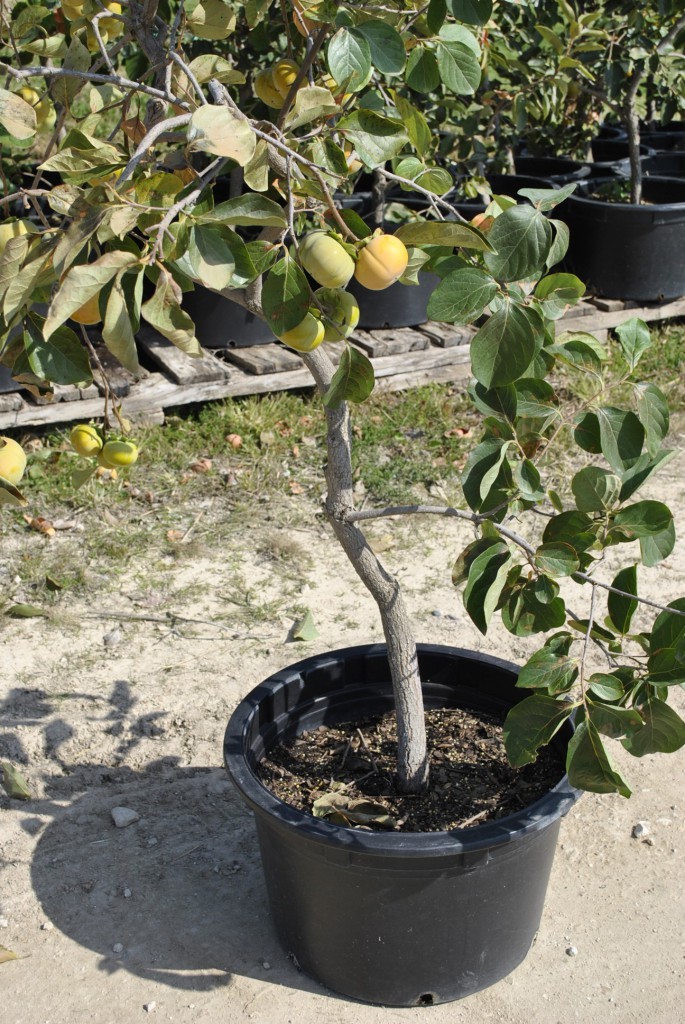 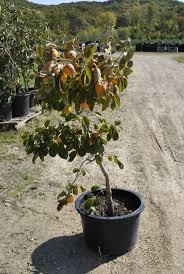 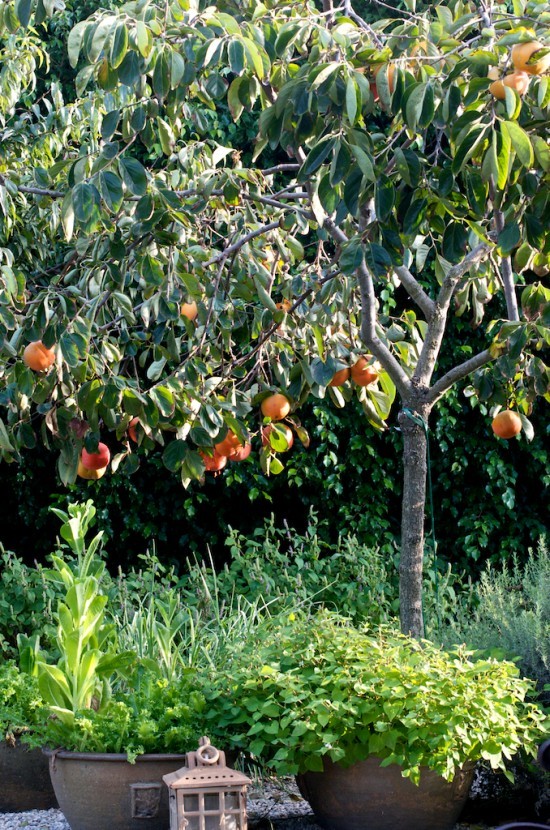 Tony, some of those pics appear to have so much tree is such relatively small containers. They look rather amazing to me.

Tony, I’m doing the same with a suruga & a Matsumoto. This is my first year and I’m thinking of leaving mine outside until mid-December, which should be enough chill hours, then bringing them inside. The inside area won’t be warm enough for them to lead out, I don’t think, but if they do I can put them in a bright sunny area until spring. What’s your plan? Also, did the websites you found these pictures on have any tips?

Kakis were not too hard to grow in pots. What I did before with my Giant Hana Fuyu was I planted it in a 20 gallon pot with Miracle-Gro moisture control potting mixed with barks from some dead tree in my back yard. I let it sat out until Late November or early December for it to go into a dormant state then brought it into a unheated garage or my tornado shelter. The temp won’t drop below zero. I water the soil every few weeks to keep the soil moist and brought it out door again in Late March or Early April depended on how mild the Winter was. I did not give it any light.

Tony, be careful with MG soils in large pots like that, they can retain a lot of water causing rot and develop a perched water table. Problems may increase over time as the soil breaks down and compacts. Adding the bark will help, but I’d suggest making your own soil blend that is at least half pine bark. Tapla’s 5-1-1 mix is very good. I use a recipe that is about half pine fines, half (light) potting soil for my figs and they are very happy.

Tapla’s 5-1-1 needs too much watering for me. I plant 2 fig trees in it and they need watering everyday at summer.

The last picture looks fantastic, how big is the pot?

From the last photo, I think that pot got to be around 30 gallons.

Do you still keep it in pot? And how productive is Fuyu in pot?

I had the Giant Hana Fuyu in the 20 gallons pot for 3 years then I planted it in the ground and it produced fruits in that same year. The following year the temp got down to -20F so the tree did not make it even with Winter protection. Giant Hana Fuyu is rated for Zone 7. 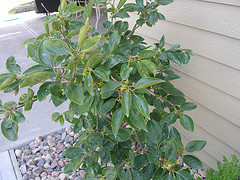 I’ve been trying this for a couple of decades now. I finally started having some success when I began using varieties from English instead of commercial varieties. I have a Saijo that went 15 years without fruiting so I stopped bringing it inside and let is die down in hash winters. Still no fruit, of course.

The first success was with a variety Nick said was non-astringent and turned out to be so. I got a couple years crops of decent fruit out of it before it died- not from cold as I bring them in during the winter, but perhaps from over-cropping it.

I use inground bags or let roots grow out of pots into soil. Tony’s methods may be more effective with kakis- keeping the roots in pots, that is, but I can’t be bothered with the daily watering requirement.

Certainly the Saijo thrived with the annual root pruning required to bring the tree in every fall- it just wouldn’t fruit for me. Root pruning should encourage fruiting so I’m still trying to figure this out- however I had the same experience with this variety half a century ago in S. CA with a tree growing in too much shade.

I have one tree in a pot growing into soil from Nick that will probably fruit next year. I can only hope it is a variety that will fruit and get up good sugar in NYS conditions. We ;need to grow earlier ripening varieties here than standard Fuyus to do that, I think.

Last year I had my best peach crop ever on a container genetic dwarf peach tree. The reason for growing that in container was to avoid leaf curl disease that comes in winter rains, devastating in my climate.

I’m doing the same this year with a Pixie Cot Apricot. The reason for container is apricots bloom here before last killing frost, which then kills the tree. If it blooms early, I can bring it inside at night.

I usually grow new grafted trees or cutting trees in containers for 2 or 3 years. I usually water with 1/8 strength or less, balanced fertilizer / fertigating. Growth is much better than in ground and production at least for the peaches and figs has been very good,

With 15 years of container fruit tree experience, these are a couple of thoughts -

Get a dolly. It really helps with moving them. A bungi cord is useful for holding the tree containet to the dolly while moving it.

Most still need daily watering. An automatic watering system would be nice, but I havent tried that.

In my experience all potted trees need daily watering in summer. The only way to avoid that would be to keep the top very small in relation to pot size. If one doesn’t prune to keep top small then the tree grows as big as it can on a days worth of water. It’s the pot size controlling the top size. I see no way other than severe pruning to avoid daily watering.

I am glad I am not the only one that used the dolly to haul the pot in the UN heated garage. For watering, I used a one gallon pladtic milk jug and poked several small holes with a nail and filled it with water to get a slow drip. It worked out well when I am on call in the hospital for the weekend.

Hey Tony, the Rojo Brillante make a great candedate for container growing for one it is very productive at a very young age so the tree might start a much smaller one and stay that way.

Are you familiar with MicroKote?.It is cupro-5000df mix with latex paint, this stuff is available at E/Bay as a 3lb bag.The interior of the container needs to be cleaned pretty good then sanded lightly so that the paint adhere.

Thanks for the infos Bob.

Yesterday I was at the One Green World Nursery browsing around at their sale. They had these Nikita’s Gift persimmon trees, fruiting in containers at about one foot tall. 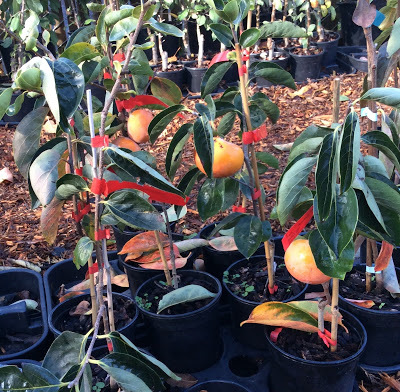 I asked how they got them to fruit but the clerk didn’t seem to know. They also had the Fire Crystal™ persimmon from Xian China, with 1 inch diam green fruits. Those were about 2 foot tall.

It was encouraging to see that such small persimmon trees could fruit in containers.

Rootstock might be a factor. I also asked about that and he didn’t know that either. I bought a different one there - Prairie Star™ a Diospyros virginiana persimmon, and when I planted it noted the roots were very fibrous. That suggests to me it is on Diospyros lotus, but I don’t know for sure. When I bought persimmon trees from Raintree, they were also on D. lotus but when I bought one from Burntridge, it was on D. virginana - larger, more brittle looking roots.

Prairie Star is Claypool H-118. It’s supposed to be good quality and very early ripening. I can’t remember why now, but I was under the impression OGW grafted their persimmons to D. virginiana.

I would loved to see my 7 Tam Kam in pots to fruit that young.