The previous owner (honestly probably the previous previous owner given how the place was when I moved in) had planted a whole row of beauty bushes in a row in our yard. They’re huge, old, gorgeous for about 2 weeks in the spring when they bloom and then whatever for the rest of the year. They’re also taking up some prime full-sun real estate that my shady yard is very lacking in (this same grand-owner also planted 7 lilacs in all the other full-sun spots).

So today I took up my weapon and I killed one. I killed a healthy, happy, growing bush/tree in cold sap. I piled its branches nearby so the other trees down the row could see their future and shiver. Also, I feel so bad about it lmao! Please tell me your guilty tree-killing stories so I don’t feel alone in my serial tree-killer status.

I killed a beautiful large oak when I moved into my house. Cleared many trees for sun but this one was massive and not necessarily in the way. I was gonna wait a year and see but the tree guy price would have been way higher to have him come do it later. With his crew already there price was 1/3. I planted a native garden in that area because I felt so guilty

A friend of mine cut down the largest tree with in 5 miles that left a bald spot in the area. We named that spot the great brown spot of North Side, Cincinnati. In Oakly Cincinnati a woman would buy a house and cut down all the large trees and sell to buy another house and repeat. She cleared out more than 30 trees over 3 foot diameter. If I clear a tree it is absolutely Necessary. My garden is on my rooftop 43 feet above the road so none of my trees had to pay the price.

Generally if I remove a tree it is for a reason. I have killed trees on a few occasions. My first year I bought 5 cherry trees and put them in planters like I normally do to remain mobile. I read to water the plants before frost before snow to protect them. 3/5 cherry trees ended up dying from overwatering. They leafed out and turned black then wilted. With no leaves on it I just pulled them. The next year tree prices doubled as well so I got to pay double what I paid for the trees I killed.

I cut down a large 30 inch diameter oak. When I cut it up I saw it had zero rot. Might have lived another 100 years. I did feel bad but I needed the sun.

I generally “cut down” trees at work with our excavators. I rationalize it because we are building water treatment systems or maintaining access to said systems. I do take joy in removing invasive honeysuckle “trees” and Autumn Olive though. The big black cherry and red maples from my current site were mentally taxing to push over. They’ll likely become root wads for a streambank stabilization project.

I don’t think I regret any trees I’ve removed. I feel sad sometimes for the reason I’m removing it.

More trees would be gone, but for my spouse. I plant more trees than I remove, although most of mine will never reach 20’ tall.

We’re surrounded by over 100’ fir trees and lots of red alder. There’s a big leaf maple that was cut down, and regrew a dozen trunks. If I was smart I would have nipped that in the bud, so to speak, but 11 years later its getting pretty big.

There’s a magnolia 2 feet from our living room, and a cedar right next to our front deck. If it were up to me, those would have been long gone when it could have been handled in 15 minutes with no risk to the house or surrounds.

I’ve taken down over a dozen Siberian Elms on my property, from 24” diameter to over 48”. Every time I do I imagine Mother Nature is smiling down on me.

Not me, but my husband, he didn’t let me remove 2 trees, but I hindsight it was a wise move. My yard would be shaded, not only that the roots will be everywhere, much harder to remove them now.
The builder planted them to control slope erosion.

I chopped down a nice looking peach this year because the fruit were white flesh and i didn’t really care for them///it was in a good spot and was replaced with a pluot seedling. I also have a raspberry red nectarine that is as tall as the house that needs to be turned into firewood (only set a few fruit even after a “mild” winter for this area). I am saving it by budding it off on another tree. Last year i got rid of all kinds of fruit trees and it hasn’t bothered me. i just try something new. I’ve learned that my family really only cares about strawberries, raspberries and blueberries and don’t seem to really care about tree fruit --except mangoes…but that ain’t happening here.

It pains me to hear of healthy stonefruit cut down. You could have grafted a pluot to that peach tree and been in full production of pluots years earlier.

I know Raintree seems to be the only seller on Raspberry Red Nectarine. I wondered why they were. It seems as though it sold out super fast and was kind of regretting not buying one hearing it was as good as the Indian Free peach on their website.

I too have visions of removing our scale-infested, in-the-way magnolia but unlike you I can’t do it, haha! I’ve promised myself that if I can’t mostly be rid of the scale in a couple years I’ll cut it down.

No sentimental feelings at all about all the white mulberry trees I’ve killed, though. I definitely feel much more guilty about trees that someone planted as opposed to trees that seeded themselves.

I say that, when I spend time clearing productive blackberry brambles. I’m less ambivalent towards that now that spotted wing drosophila make them all soft before peak ripeness 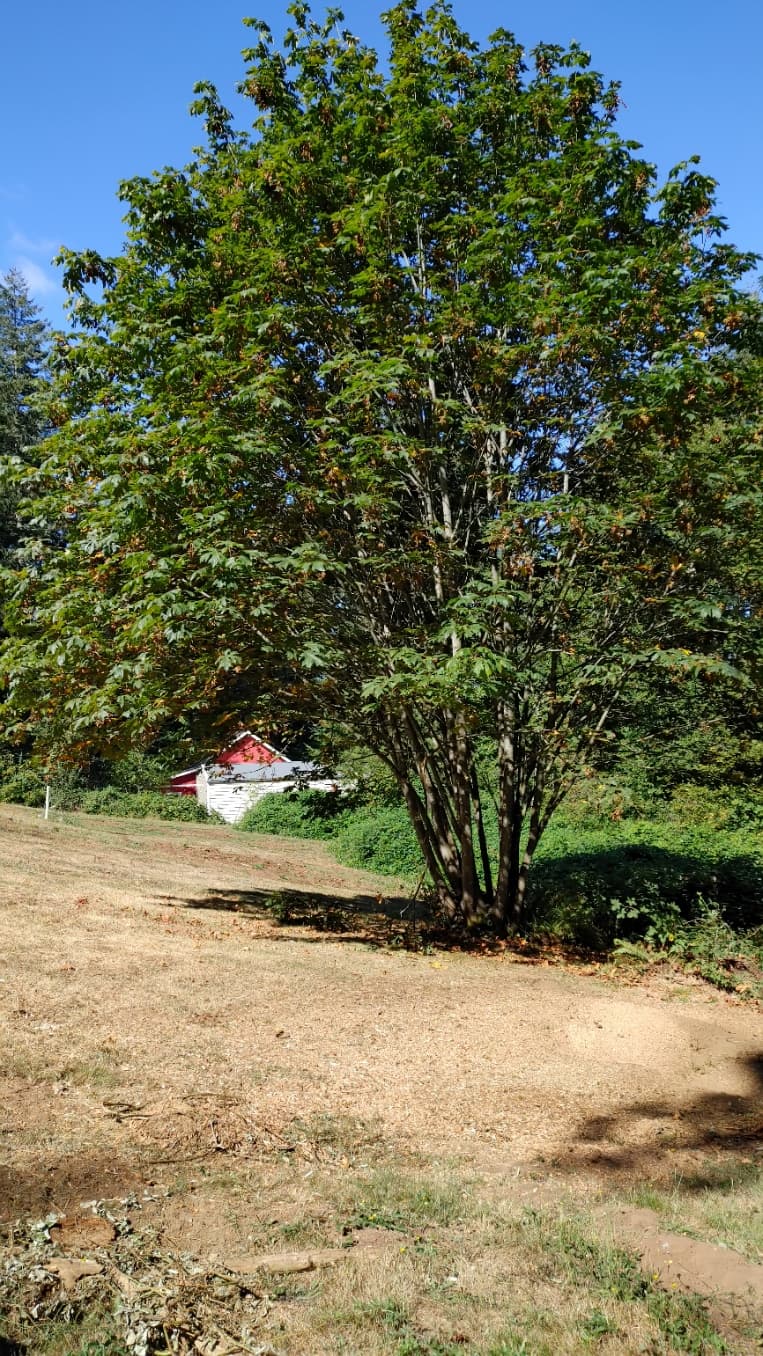 Some of these trunks are starting to self graft together. The longer I wait, the more dangerous cutting this thing will be.

Maybe I’ll start removing some of the outer trunks when the summer burn ban is lifted.

I try to only take trees that are in decline because I don’t like to kill trees. I am getting over my hesitancy because my rough estimate is I need to take down 1 to 3 large trees and many saplings each year to keep my property from becoming 100% shade. By large trees, I mean 18” to 48” diameter. I don’t have that much property, but nature reclaims her property faster than I can maintain “my” property.

I made progress today on re-clearing some areas I cleared 35 years ago.
One, no make that 3, are getting spared…a sugar maple I spared 35 years ago and a whiteoak I spared 35 years ago, and a serviceberry that either didn’t exist back then or was a small seedling at the time that I took no notice of. (Accidentally damaged a wild cherry or I might have also spared it.)

I feel satisfied, not a bit bad, for cutting those I cut. Next time I get a holiday or some other day things are slow and the weather is good…lots more trees from pencil size to milk jug size are getting cut. Sticks for firewood, brush for a big bonfire.

The previous owner of our property had clear cut about a half acre. A few years later it had grown into a jungle/thicket/mess. This is after I had planted a few fruit trees and was still re-clearing sections of it. I cut one large Beech tree and at least a million saplings. One brush pile of a half dozen or so 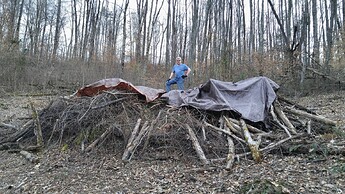 I’ve planted thousands more than I’ve ever cut, so I feel virtually no remorse in taking one down… and it’s usually an ‘undesirable’(sweetgum, elm, honeylocust, boxelder, hackberry, etc.) or an invasive, like Ailanthus, callery pear, burning bush.

Removed a row of boxwoods and a sizeable Magnolia grandiflora at the lakehouse last week, all planted by the previous owners… they were ‘in the wrong place’, and seriously blocking views. Had previously removed seedling black walnut, peach, a big Euonymus nd some diseased dogwoods. Their removal was a ‘plus’.

I need to get a tarp over mine…keep it dry…so I can burn it next to the woods when things are otherwise too damp to burn, including the forest floor. (Otherwise I may have to burn when things are snow-covered.)

I take it the OP doesn’t have cottonwood around. I keep fighting them, if I let one stand by the end of the second year is going to be 30’+ tall. So no, I don’t feel bad from cutting the correct trees every year.

On the other hand breaking a branch while installing a spreader on a fruit tree feels like I just broke one of my own bones.