And leads to colorful, emphatic (though useless) self-recriminations.

In the last few years… yanked, took out, cut down and ground… or dug up… a few things…

No bad feelings… they were not working and I am trying things in those locations that i have much more faith in… moving more to low maintenance no spray stuff.

What does not work… has to go.

I’ve got a black walnut that i’ve been using as a shade tree that is destined for the chainsaw. Amazing at how fast (and big) this thing is after not that many years. If i had a lot of room i’d keep it, but i don’t so its a goner. I also have a second one that is also being used for shade that will also meet a similar fate. The squirrels planted both of them.

I cut down so many large trees in my previous home. Three Poplars that were nothing but trouble and three Monterey Pines that were dropping 12 inch branches on us. One of the tree trimmers who came over for a quote marvelled at how cool the microclimate was in my yard. Broke my heart to take them out and let my house bake. But eventually, my fruit trees grew big enough and brought the greenery back.

Haha, I definitely don’t feel bad at all about killing prolific, self-seeding trees! It’s the ones that someone clearly carefully planted and tended 25 years ago in the wrong spot that I cry about at night.

I have 3 rows of red cedars blocking the noise and sights from the somewhat busy road I live on. They dont do the best at blocking sound or sight anymore since the bottoms have been trimmed up 15ft by previous owners. I’ve contemplated cutting these down and getting something better for blocking the road noise, but they do help some and they have been there for over 100 years. Planted by the original homeowners, 3 generations ago. I have a picture of them that is from the 1920s and they are good sized back then already. They are not pretty with the tops broke off all of them, been that way for a very long time and doesnt seem to bother them. I’ve planted some spruce between one row and another row of cedars on the inside row (heavily shaded yet growing some) Well see if i can bring myself to cut them if these new trees ever get some size.

By ‘cedars’, do you mean the tree JUNIPERUS VIRGINIANA commonly referred to as ‘red cedar’?

Or something else such as arborvitae? Or white cedar? (Thuja occidentalis)

Atlas cedar, cedar of Lebanon and deodar cedar are the only real “cedars”, but many things get called cedars. Incense cedar, Alaska cedar, just a couple more.

@BlueBerry yes i mean juniper or red cedar. I get used to just saying cedars since i dont think we have any of the other kinds around. Could be wrong though.

my property is ringed with red pine and black willow. love the pine but the willow shed huge limbs in windy times and smaller branches all the time. id get rid of all of them but would have to win the lottery to do it. we had one of the biggest at 36in. leaning dangerously over the back of the house that cost me a grand to be removed. got lots of woodchip mulch. 20 more to go. 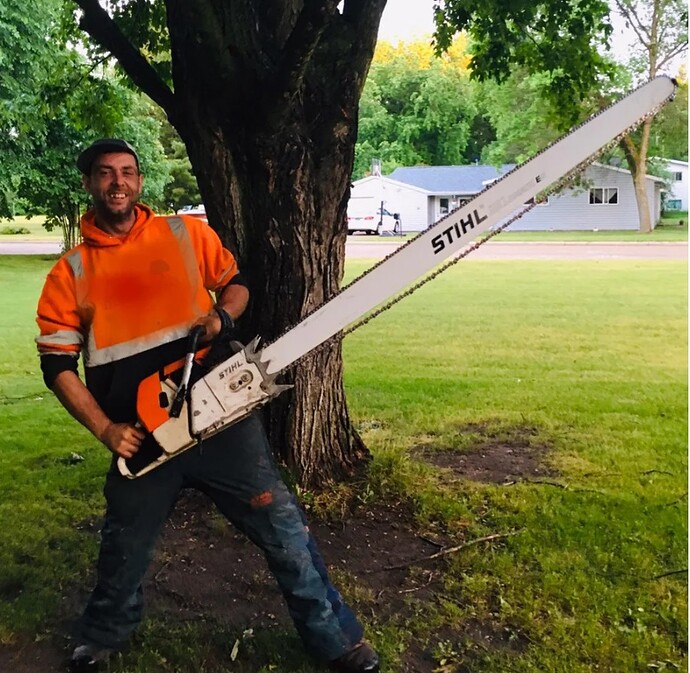 now thats a saw! i saw one at a local lumberjack museum that was long like that with a handle at the tip for a 2 man operation. motor on it was huge. circa 1952.

I always feel guilty chopping one down something already in place, but I only do it if it is improving the chances of the others around. I currently have several things growing that I wasn’t sure how much would make it. I will not feel so guilty for thinning the stands as they begin to crowd each other or one or more demonstrates dominance.

I Had a 360 year old Doug Fir in my front yard cut down. I keep thinking about all the things it must have seen in all those years if it had had eyes

I cut down a beautiful 40 year old maple and several other trees. I felt guilty, but now two maples and many other trees are growing in their place. If you have a good reason, don’t feel bad about cutting down a tree.

That’s an old tree…you counted the rings I suppose?

Not sure what kind. If I could do it over, I probably would have left it (because now I know I could have tapped that tree) but I have two beautiful autumn blaze in its place.

You can tap them too…but it takes twice as long to boil to get syrup.

I save sugar maples if I can. Red maples have become over-planted, both in nature and in yards. They are a much higher % of the forest than the case was 150 years ago.

Sugar maple trees are slow growers. One I planted in 1977 is no bigger than some Autumn Blaze I planted in 2005. But, it’ll still be alive probably for 100 years after I’m gone, and the autumn blaze probably not.
(Though if farms keep becoming subdivisions…the sugar maple might get dozed over and a quick growing tree planted in the new yard…you never know.)

there is a silver maple that St. Lawrence nursery sells that produces sap in half the time, is more water tolerant and its sap is twice the sugar of sugar maples. id love to grow some once i get land. yellow birch is another that grows quick and is tappable. it actually likes wet ground.