If anybody needs to be desensitized they are welcome to come by every spring to chop down cottonwood. Don’t worry if you miss a year, they’ll be plenty more the next one. They can put 12’ of growth in a year which means that the ones from last year I failed to get around to are now about 24’ tall. 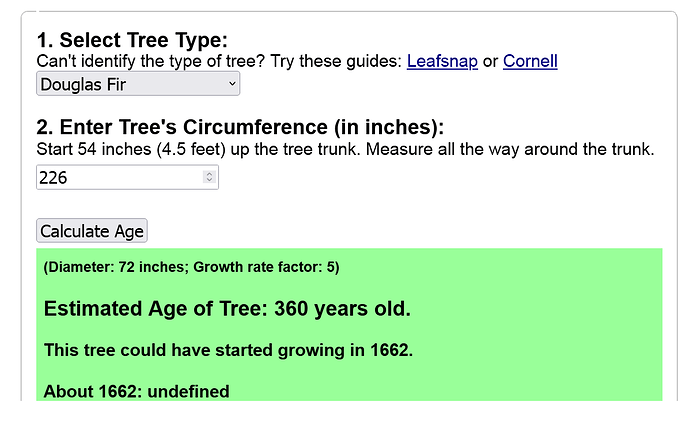 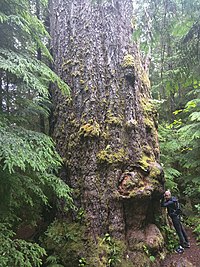 The Red Creek Fir is a large Douglas fir (Pseudotsuga menziesii) tree located in the San Juan Valley of Vancouver Island in British Columbia, Canada. By volume, it is the largest known Douglas fir tree on Earth. The tree was seeded sometime around 1000 CE. It flourished due to its location on the shaded southern slopes of the San Juan Valley and being no more than 0.5 km (0.31 mi) from the San Juan River.[citation needed] Despite various attempts by the Ancient Forest Alliance, it does not yet ...

Guessing based on diameter or circumfrerance isn’t nearly as accurate as counting rings though!

But it is probably a tad less invasive…

Maybe they did a core sample for ring counting and or carbon dating?

cottonwood looks like our quaking aspen here and acts the same. you cut one down you wind up with hundreds of sprouts from the roots for many years.

I don’t have the heart to dispose of fruit trees that I’m removing just because I don’t like them. I think I’m influenced by the fact that I was going to remove my golden delicious tree one year. Lots of disease issues and spindly growth. The first apples were small and not tasty. After some soul searching

I decided to wait one more year.

The next year the apples were plentiful (maybe 30) full sized and really good. I was so glad I waited.

I have a tree holding place that the “misfits” are relinquished to. No pruning, no spraying, pretty crappy soil. I think I have four there now, with a few that have been moved into the orchard over time. Some are still doing terrible but some have proven themselves to me. I’ll be looking for another spot to move them back to. Red free is a good one. I have had terrible luck with Virginia Gold and mutsu. No reprieve for them.

I’m getting overwhelmed with the orchard and garden and was thinking of cutting back some on the vegetables or using some of the space for other things. I would like to plant more of our favorites but probably less variety. I could do an espalier of apples along one side of the fence. Close to water, good use of space.

I always feel bad about it… I have to kill a lot of trees in my yard - we just bought a house and though land is big, it is also shady, so all sunny parts are taken by decorative trees - small and large. I counted at least 10 Dog wood trees, from huge to about couple years old… They all have to go, as well as mature burning bushes, and some other things… Feeling sad about it.

But, you enjoy it…so that’s the prize.

No reason to feel bad if you replace a tree you don’t need and plant a more useful one!

I’ve found that just in general it’s easier to get rid of things if they go into the ‘last chance’ bin for a year or so! That, or if I’m giving them away to a new owner who wants them… that makes me feel better about getting rid of trees. I just don’t have the heart to kill them otherwise.

I’ve taken down too many trees over the years, but some brought a bout of remorse as I pulled the cord on the chainsaw. The worst was when I took down a huge maple along a city boulevard, as I was working for a landscaper. It was the last mature tree on the commercial strip, and now you know why all those strips look that way. They just wanted people to see their sign better.
But now nothing I cut goes to waste. In the woodstove or into a Hugel pile while I try to make soil.

Yeah, we are surrounded by Doug Fir well over 100 feet tall. It’s secondary growth so I assume they are mostly of similar age. The trunk diameter varies greatly.

You could try finding new owners for the small ones! I’ve found that I can post them up on certain FB groups or FB Marketplace and someone will come and dig them up and cart them away, and think that they got themselves a deal. Not the large ones though, unfortunately.

Im usually pretty heartless when it comes to removing things that dont work, but i chose to remove a row of healthy but young (easy to uproot) apple trees in a prime location to experiment with avocadoes. The first few came out and went through the chipper with a smile on my face, but the last one held into the earth like nobodys business and s.p.o.k.e. t.o. m.y. s.o.u.l. i thought i was going crazy, seriously may have lol I felt i was walking a wrongly accused man to the gallows as he cried. It still haunts me. My DH just shakes his head when I have in depth conversations now with my plants thanking them and explaining exactly why the pruners,are in my hand…

We have an agreement with previous owner that she will try to get the small ones. My problem with it, I have a deadline in moving my trees from old house to the new coming soon as we are in the process of selling the old house. If she doesn’t take what she need before October first, I will have to remove them by just pulling them out with a truck, digging them out carefully will take too much time that I don’t have. 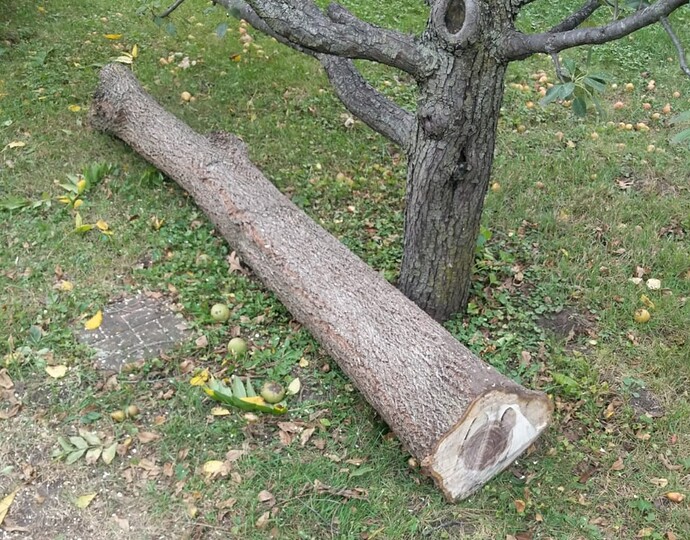 I dropped the 2nd black walnut in my yard this morning…the 1st one is cut up. I’ve got to chip all the small branches of this second one still. It’ll end up as firewood next year. I’m glad i took it down before it got any bigger…those upper branches were really getting tall.

I do hesitate to cut black walnut…valuable timber and also nuts. But, it can sure mess with other trees and bushes you might like to plant nearby…juglone toxicity.

They are great trees if you have the space for them. They do fine near oak but it was starting to kill a pear tree. The wood is very soft for hardwood–below oak. They are neat if they have a lot of heartwood, this one is still young so it doesn’t have too much. I just was reading they have their maximum growth rate between 40 and 50 years of age–so it needed another 30+ years to really take off.