Can anyone identify the disease on this peach tree?
I know the picture isn’t really good, but it seems to have brown spots all over the twigs and the leaves are pale . the tree in general is in poor health. Out of all my peach & nectarine trees
its the only one doing so poorly.Uploading…

I’m having issues uploading the photo. 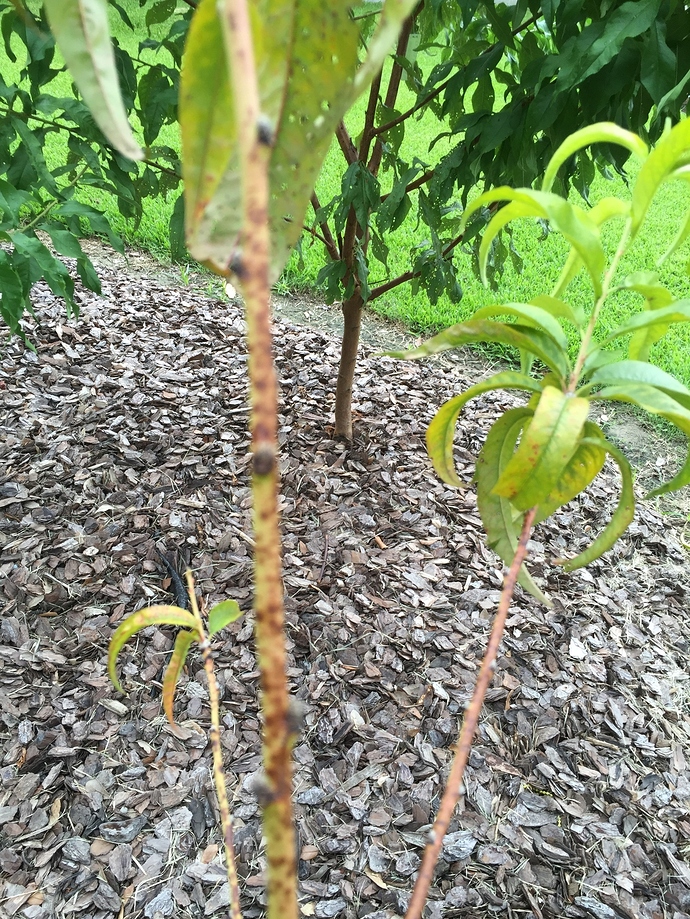 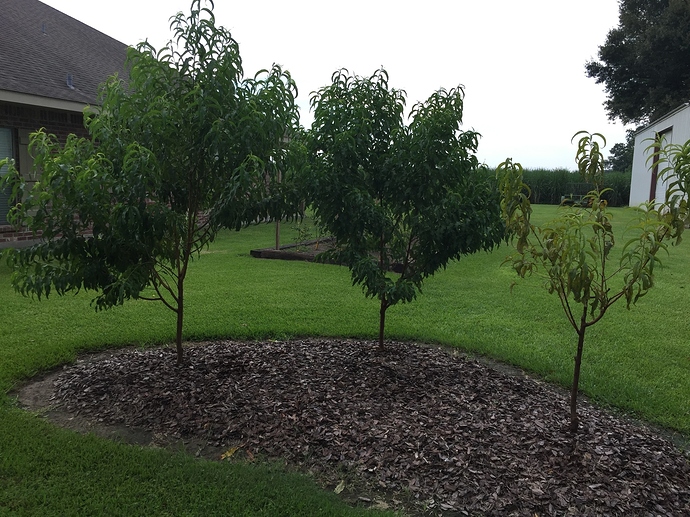 Citation has done very poorly for me. It has very low vigor. Out of 3 trees, all showed signs of nutrient deficiency. When I pulled them up they had very little root growth. All the other peaches and plums were growing well. The plum on citation also grew well. In our area the citation root stock is considered a short lived root stock. I will not use it again. One is still alive after I it in a 20 gallon pot. It has grown very little. This the the third year of growing in a pot and it has only grown about 12 to 18 inches total.

I would say rootstock. All my nectarines and peaches that are on citation look poor this time of year, while the ones on guardian and lovell look fine.

Yeah the citation rootstock has it growing poorly, the other two are on Lovell & nemaguard and are doing fine.
I bought that tree as a pollinator for the Indian free (middle tree) and it was only available on citation.

I’d like to buy a bunch of guardian rootstock this year coming but can’t seem to find anyone that sells it.

Perhaps next winter graft branches into Indian free just in case the tree on citation gives in. Yep I agree bad rootstock is the only trouble.

Do you grow any of the LSU peaches? I have always heard that La Feliciana is a good freestone and pretty disease resistant. I know they have other releases that sound good also.

I have 3 La Feliciana’s , 2 La Festival’s and 1 La Peche but just planted them last year and haven’t had any fruit yet. There’s some other LSU varities as well. And yes they’re pretty disease resistant.

My Double Jewel on Citation didn’t do well on Citation, but I attributed it to letting it overbear as a juvenile and stunting out.

I do not like citation either. But that tree looks to be infected with bacterial spot. I would not put another Double Jewel in. I wanted to do something similar, 2 in one hole. Red Baron and Double Jewell, I’m not doing that now. Seems to be a bacterial spot magnet. I might try Double Delight nectarine instead. Pink double flowers,

Drew, is double delight nectarine the tree you use to pollinate Indian free?

Drew, is double delight nectarine the tree you use to pollinate Indian free?

No, just one I would like to try. I don’t have either Red Baron or Double Delight. I use Arctic Glo nectarine, PF lucky 13, and Spice Zee Nectaplum.
Even though Indian Free blooms later than all three, it always sets a full amount of fruit. I did try and make specific crosses this year. I used Nadia, Satsuma, and Arctic Glo. I collected pollen, dried and used it for pollination. I also collected pollen from White Gold Sweet cherry too. Not sure if it worked? All pits will be grown out. I didn’t protect blossoms from other pollinators, as I want fruit first and foremost. Any that germinates though has to be a cross. I’m looking forward to any possible hybrids.

I’d like to buy a bunch of guardian rootstock this year coming but can’t seem to find anyone that sells it.

Guardian is a great rootstock for the SE. However, I’ve had trouble with it this year. I have a few Glenglo trees on Guardian which are doing fine, but my one JulyPrince on Guardian looks horrible. The leaves are all chlorosis looking, while all the trees around it are nice and green. This tree obviously has something wrong with it, it sticks out like a sore thumb.

I can’t imagine it’s the peach variety, so I think it has something to do with the rootstock. We’ve had lots of rain this year, but the trees are up in a terrace. Still I wonder if Guardian is extra sensitive to water. Other than that, the only other possibility I can think of is that Guardian may be more sensitive to crown gall. I know I have crown gall in my orchard. It doesn’t seem to affect other peach trees much, but I wonder if Guardian reacts differently.

I know I have crown gall in my orchard.

That being the case stay away from Citation. You probably already do.

the blade of his peach is holed, is a clear sign that the tree has suffered what in my country called “screening” (Coryneum beijerinckii Out.)

Went ahead and took a pic today, so I can show what I’m talking about w/ Guardian. You can see the tree sticking out on the left about the middle of the photo. It’s the only peach tree in the orchard like this, very light colored chlorosis leaves. Every other tree in the orchard has dark leaves.

As I mentioned the tree is JulyPrince. I actually harvested a lot of fruit off this tree. As @rayrose has mentioned, this variety is a big winner. Loads of big delicious fruit, despite frost events which nailed other peaches. I just wish I knew for sure why this tree is sick. The only thing really different is the rootstock, but as I’ve said, I have a few other trees on Guardian and they look fine. 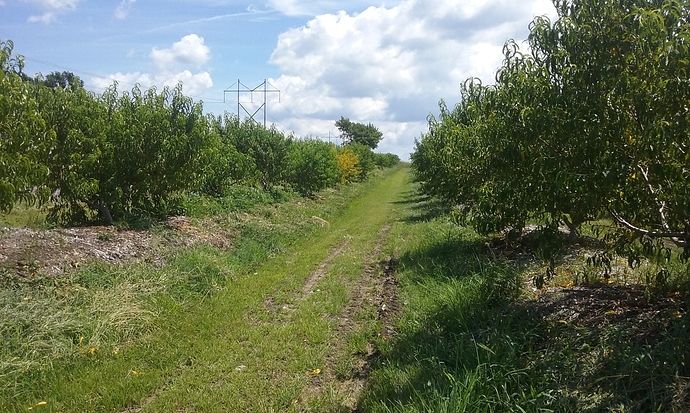