For years I’ve ignored this J. Plum and ran with Methely as my earliest plum of the season. Black knot is a little too loving of Methely and given that descriptions of Early Golden suggests its a tastier plum thant Shiro I’m considering giving it a shot.

Anyone have any experience with it, or better still, some wood?

This was my entry from July 19 two years ago.

What fruits did you eat today? General Fruit Growing

Early Golden plum. 14 brix. Tasted good after a bike ride on a hot evening. I don’t need a whole tree of these but it is a nice early plum. I’ll keep grafting other varieties onto my EG tree but I’ll leave several branches as is. Hope I get a few more next year. [eg3]

My Methleys have Black knot. Leave it or treat it? If treat it how do you do that?

Cut it down to clean wood as soon as you identify it and keep a tarp under the tree while you work so you don’t leave any on the grown. Dispose of it like toxic waste or burn it. I like to make a clean edge of bark to wood.

I am pretty sure I have wood. How much do you want?

After letting my Early Golden fruit for 3 years, I finally grafted it over to Hollywood. Because its color was really incredible - a kind of translucent yellow/orange that people would comment on as it was ripening - my mouth would salivate anticipating its taste. Is it going to be apricot-like or nectarine-like? But one bite was quite a letdown - mealy and blah.
If the color and flavor match in your climate, it might be worth a try! Perhaps my cool climate keeps its taste from matching its looks.

Just need a couple of sticks. Need anything?

Maybe I’d heard that and was why after all these years I never grew it. Recently I saw a plum rating here from the U. of NH or something that rated it very good and Shiro as poor. But what I’m getting here is that it really isn’t much worth growing so I’m having second thoughts.

Thanks folks. I love this forum.

No thanks. PM me your address and I’ll send it as soon as I can.

I’m getting a scion of La Crescent hybrid Plum from Bob Purvis.It’s a yellow one that sounds good flavored.

I’m looking for very early- I have plenty of delicious plums, just not in that season.

Are you sure you aren’t interested in Rema, one of my favorite and hardiest J. plums?

When your La Crescent leafs out, can you post a photo of the leaves? I bought this scion from fruitwoodnursery, and grafted it to Black Ice. It grew 5ish feet, and is taller and thicker than all the Black Ice branches. No sign that it will bloom this year, yet. 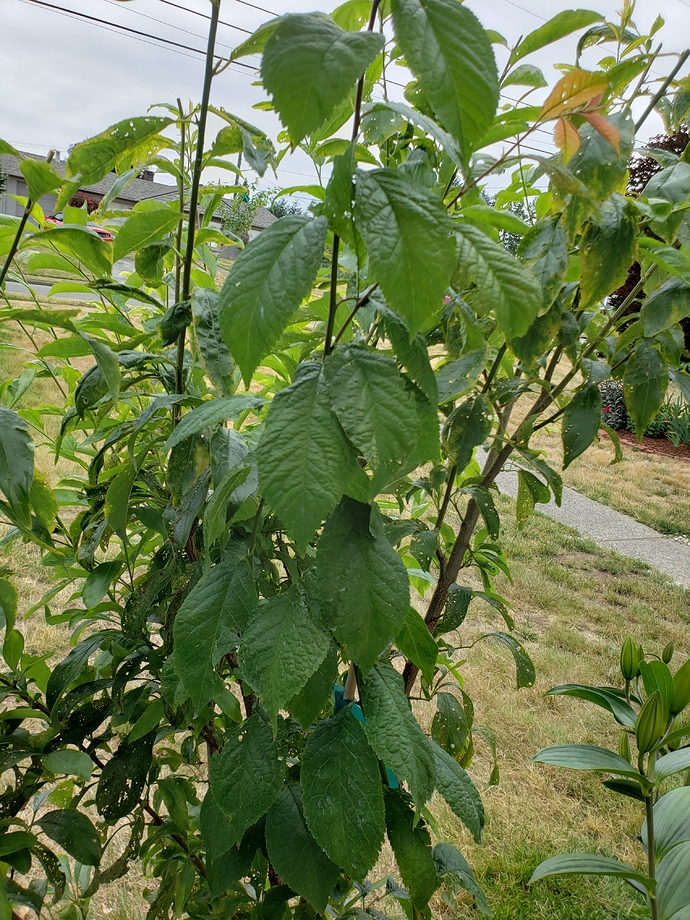 Alan, please describe Rema a bit more. Flavor, zone, ripening time, and so forth. I tried to look it up but didn’t find anything. Thanks in advance.

You talked me into it. I’d rather you move out here and take over my orchard and teach me what you know, but I’ll settle for the Plum wood.

BTW, Rema is a midseason plum, although I can’t remember precisely its ripening time. Last year there were no plums because of hard late freeze and the year before Rema bore fruit but not much else did in mid-season. I think it ripens just after Santa Rosa, 2-3 weeks after Shiro.

It is small and highly flavored just because of its high brix. It’s my favorite of non-blood plums. The best one I grow is Elephant Heart but it is quirky as hell as a producer, proned to freeze out from late frost and exceptionally slow to come into production for a J. plum.

We can do an exchange- I need to find out if early golden is a decent plum here because Methely is so prone to black knot. The mixed reviews are weird.

I gorge myself on ‘Early Golden’ every July. It’s insanely productive with branches bending to the ground under weight of the crop despite shaking lots of fruit out of the tree early in development. I don’t find it bland unless over ripe. When eaten at its prime I sometimes get hints of peach or apricot, but it is it’s own flavor really. All my family loves it too.

The tree is very vigorous and prior to it beginning to fruit I was worried it was getting WAY too tall. Then it lost half its height the first year it fruited and has been kind of umbrella shaped ever since then.

I’ve had pretty low rooting success for cuttings of ‘Early Golden’, but it layers really easily. I actually just planted one today to make a new stool bed for propagation.

I need to find out if early golden is a decent plum here because Methely is so prone to black knot. The mixed reviews are weird.

I didn’t notice this thread until it got bumped. I’ve had Early Golden from the farmers market a few times. I like it better than Methley and a lot better than Shiro (too juicy). But that is more about me not liking those two, than liking Early Golden. It’s passable and pretty decent for its season. I don’t think I’ve had it in the last few years, as I don’t make any special effort to get it.

I personally enjoy Early Golden and my Shiro for different reasons. I love all of my plums.

I forgot to mention, ‘Early Golden’ is amazing for pie. While it tastes sweet fresh, any type of processing seems to bring out a tart flavor in it so it can be used as an alternative to sour cherries.