I have a giant Thai lime that I faithfully drag in and out of the house each winter. Despite its spikes! Last year, I finally figured out how to get it to bloom and managed to get two limes. I forgot about one until after my move in the fall (it was quite large!). The lime is blooming again, but I seem to get mostly male flowers. Or, at least flowers that have no pistil. Is there any way to encourage more lime-producing flowers? This year, the tree is covered in blooms, but I’m not seeing any that look like they will have limes. 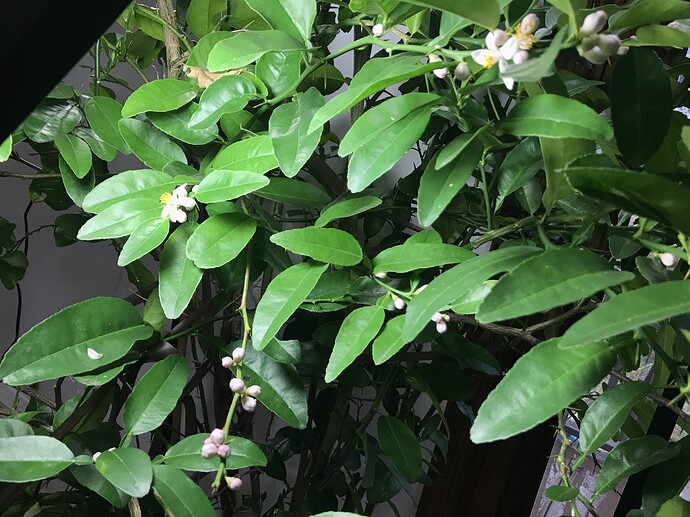 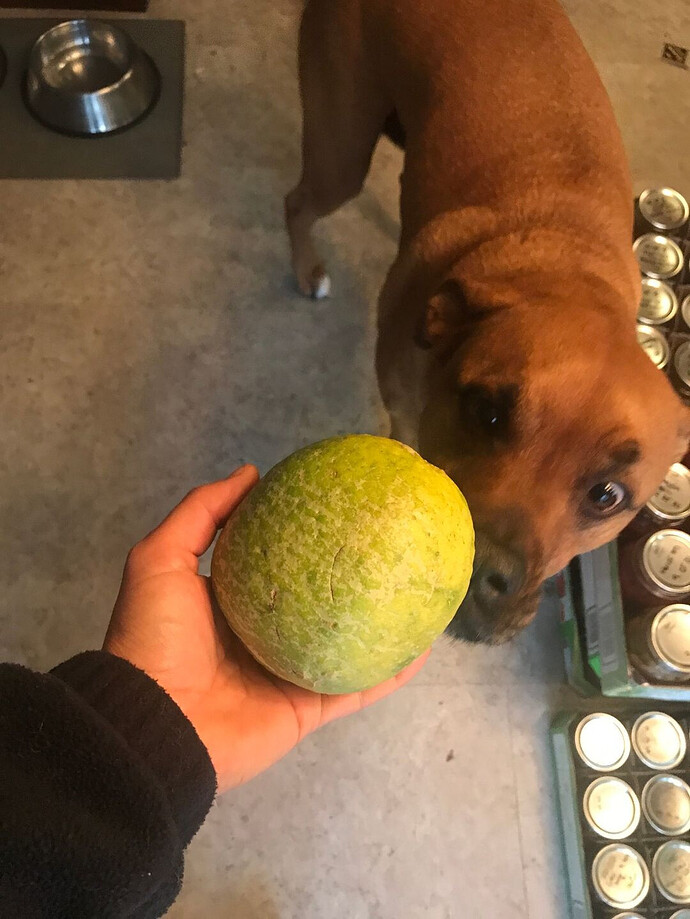 Forgot to add, I am in SE Pennsylvania, US. Zone 6b.

Sorry that I cannot help you but I love the pic with your dog!

What species is that lime specifically? “Thai Lime” usually refers to Makrut Limes (otherwise known as Kaffir Limes), which that most certainly isn’t.
Sometimes Bergamots are mislabelled as makrut, is that what it is?

The only reason I’m so focussed on what specific tree it is, is that even with a dozen different varieties of citrus under my belt (and some extensive googling), I can’t seem to find a “Thai Lime” that looks like that, or that has specifically gendered flowers (I can’t find ANY gendered flower citrus honestly, nor even the mention of it…)

Any extra details may help us point you towards some good info on helping increase the yields when overwintering!

Side note: How do they taste?

What species is that lime specifically?

It isn’t a Thai Lime?? I bought it maybe 10 years ago and I think it was sold as a Kaffir Lime (but I try not to use that word). I use it mainly for the leave in Thai cooking. It seems to have most of the characteristics, sharp spikes, lobbed leaves, very fragrant leaves. When the lime was smaller, it was more bumpy, but not as bumpy as the images I am seeing now. I’ll see if I can find a picture and, maybe the tag is still in my garden journal. I bought it specifically for the leaves and if it isn’t what I wanted…Aghhhhhhh!!!

How do they taste?

The skin is extremely fragrant and the juice itself if very…limey? Sweetish, fragrant…I’m not sure how to describe it :).

This is the lime, smaller 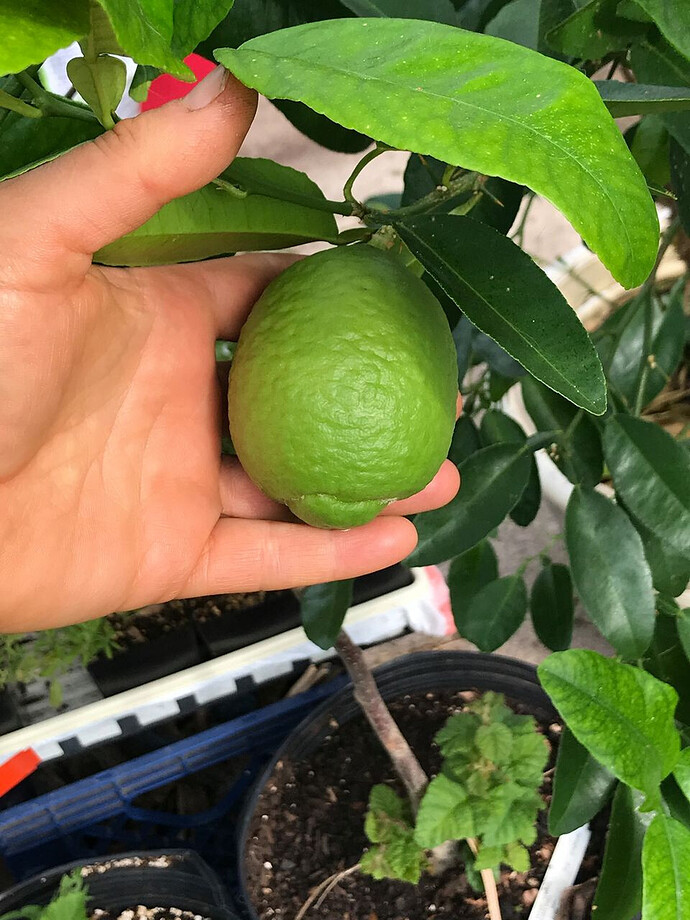 Close up of the thorns and leaves. It the summer, outside, they become larger and more deeply lobed. 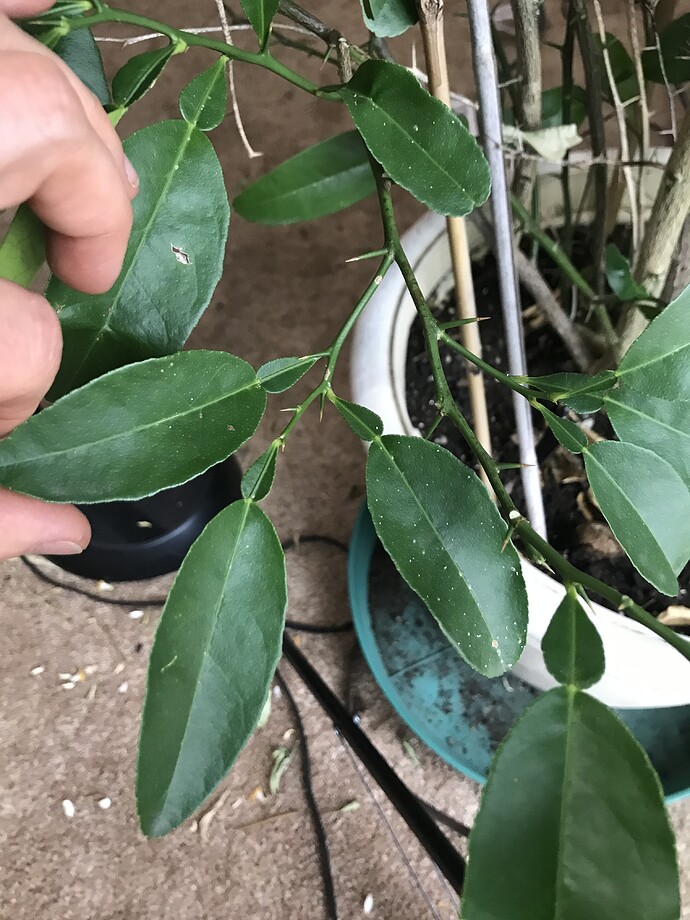 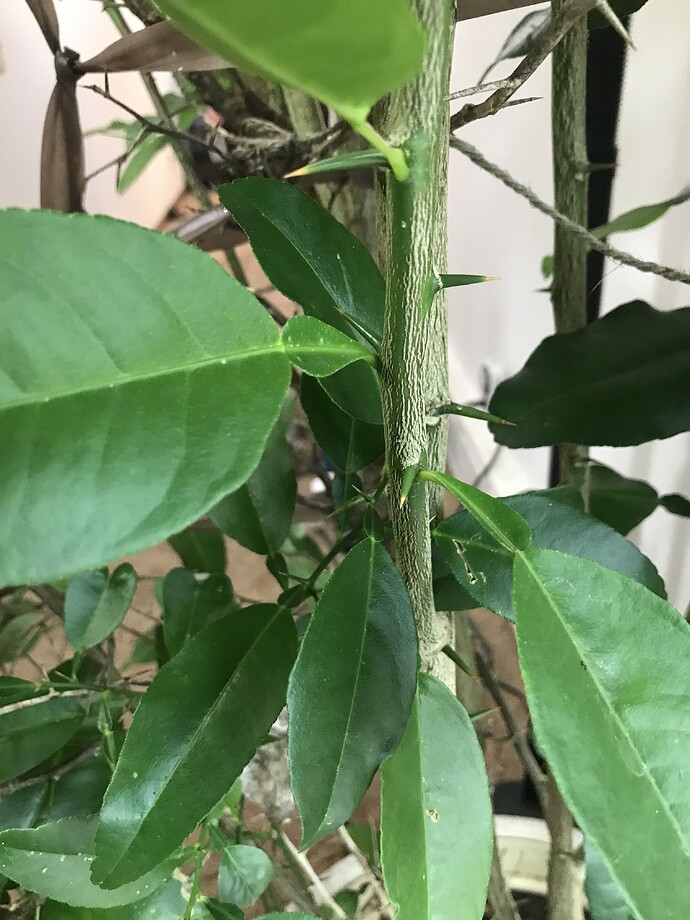 Not thai lime. Leaves should have equal petiole and leaf size. Fruit should be bumpy 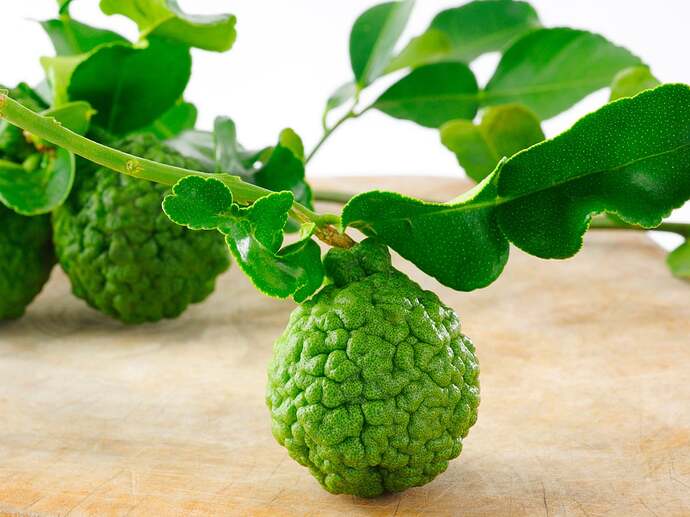 I had no idea about the etymology of that term, thank you for motivating me to look it up. In case anyone else wants to know why it might be better to use other common names for this type of lime, here’s the Wikipedia explanation:

This is the lime, smaller

That doesn’t really look anything like makrut/Thai lime to me. The fruit is too smooth and the leaves lack the distinct double lobes. Here are some photos from online that match what I think of as Thai lime fruit and leaves: 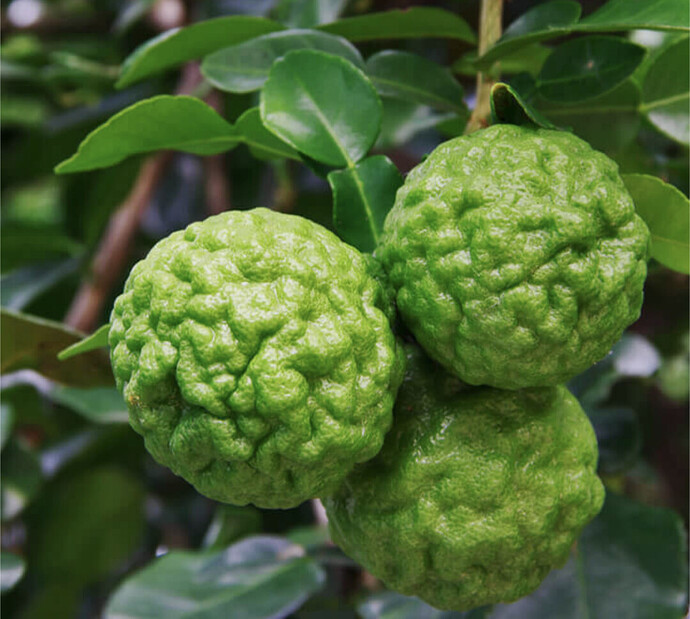 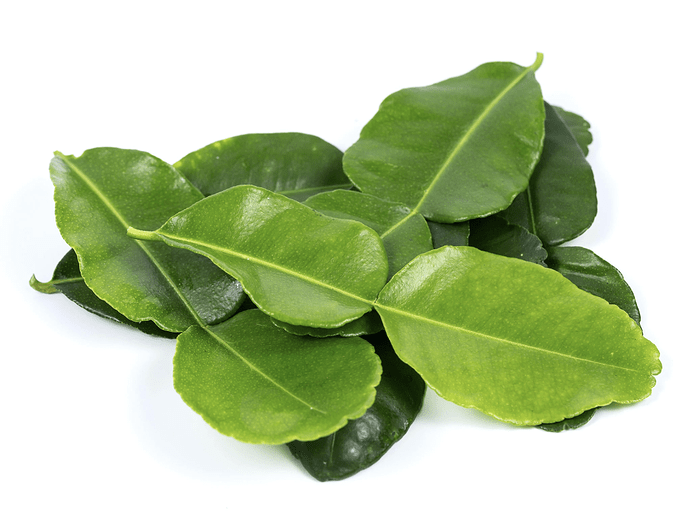 Aggghhhhhhh!!! I’ve been dragging a 6 foot tall, spike-y, lime tree in and out of the house for the last 10 years and it isn’t even the right lime??? The thing is heavy and bites. Great. Now I will have two spike-y, heavy lime trees to drag in and out, because I’m going to need to buy a true Makrut lime. Any suggestions on where to purchase them? Obviously, I cannot trust my local nurseries. Can anyone identify it? I’ve been using the leaves for cooking and they do have a lovely aroma, but if the true Makrut lime is better, I need it. (side note on Kaffir, the term is used as a racial slur in some parts of the world, so I try to avoid it; but if Makrut is a better description than Thai, I’ll switch to that).

@swincher [quote=“swincher, post:10, topic:42665”]
distinct double lobes
[/quote]
In the summer, outside, the lobes get deeper and doubled; but not quite as equally double like the picture you posted.

You can buy a grafted makrut from Logee’s or One Green World. It won’t be anywhere near as spiky as a seed grown plant. Mine has the tiniest thorns that aren’t even a hazard other than a minor scratch here and there. It also fruits prolifically.

When I had a makrut lime fruit, I juiced it, and tasting it ruined my mouth for at least a day. That was an unpleasant experience.

I actually like the juice in sauces. It’s very fragrant, but probably more acidic than a regular lime. I haven’t tasted the straight juice yet.

Check out this great video by Weird Explorer about how confusing and muddled the names for “Thai Lime” are: https://youtu.be/2cyTYfD_3ZI

He’s where I first heard the less offensive alternative term “Makrut” which I’ve switched to ever since (I’m an Aussie, but have many South African, and Zimbabwean friends)

Thanks, all, for your feedback! I’d really like to identify what lime it is that I have! Pictures are in the thread, but here is a recap:

Could it be an accidental hybrid grown from seed? 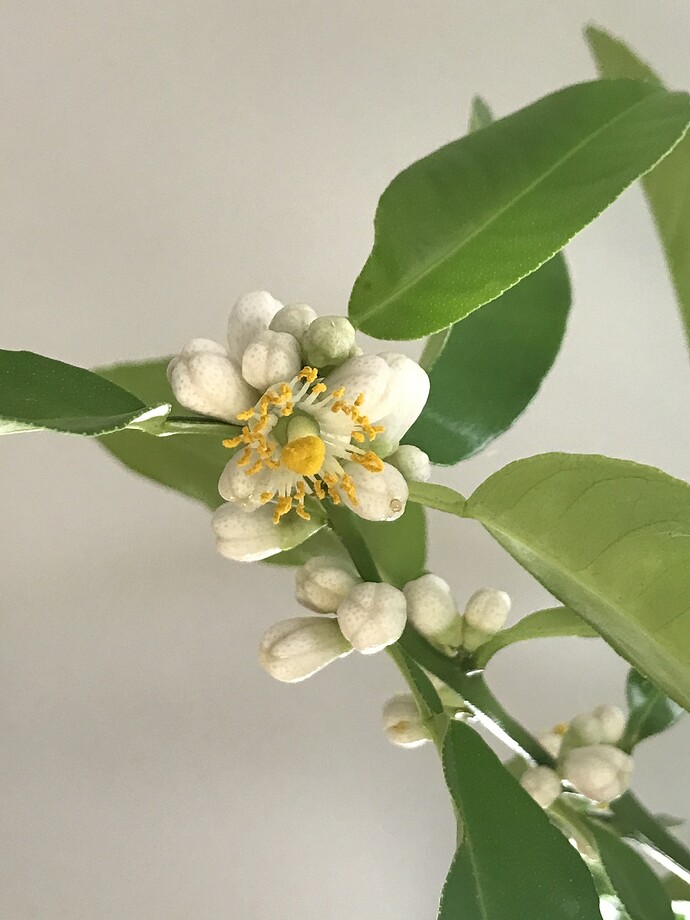 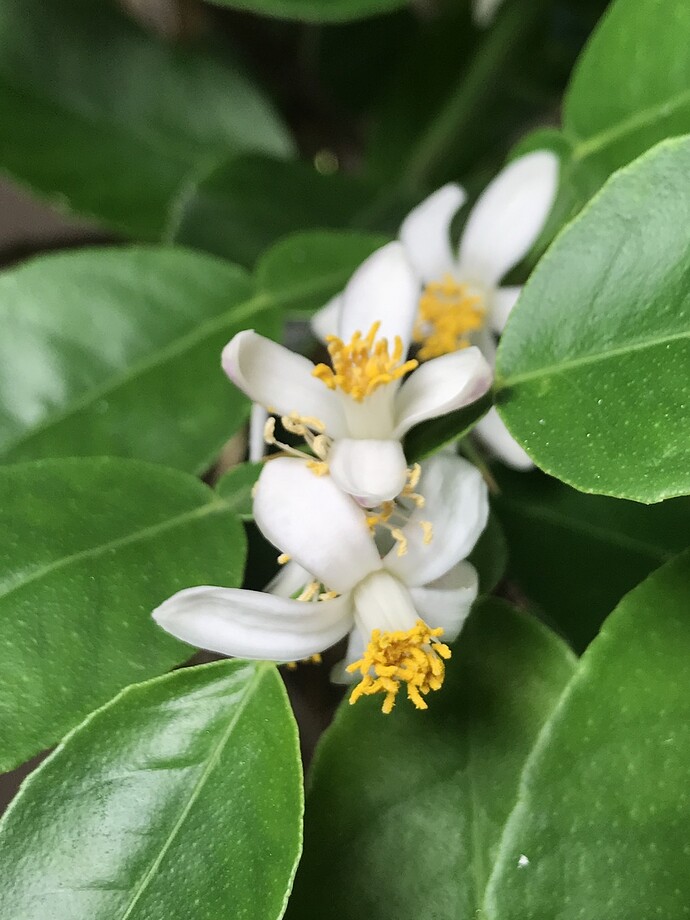 It definitely looks like the top is just more mature; are you able to take one of the flowers that looks like the bottom and open it up?
Fused stamen is usually just the early stage (helps prevent its own pollen from being the only pollen it gets), and they open up like the top after a little while- This is especially true of Limes, in my experience (my 3 usually take another 9-10 days after the open to finally show their pistils).

I work for a University that has free access to a pretty massive journal access, and I’ve yet to see mention in any journal database of any known citrus that is either single gendered, or has separately gendered flowers, with all references pointing to citrus flowers being “perfect” meaning “contains male and female parts together” (also sometimes called bi-sexual).

To get to the root point: I’m not sure why your fruit take is so poor, how do you usually go about pollinating it? (or are you blooms during high bee/pollinator activity periods?)

Citrus are usually parthenocarpic, not requiring pollination to create their fruit, but I’ve found that I’ve had better take on early blooming (earlier than when pollinators are active) citrus if I take a small makeup/blending brush and just go flower to flower getting a bunch of pollen and really making sure the pistil is coated (citrus as great for having a very sticky pistil, so easy to get lots of pollen stuck on). Even better if there’s two different breeds of citrus to go between.

Last note: I reckon it’s a Tahitian lime breed (also occasionally called a Persian lime), the leaves look pretty similar, and the fruit can look the first fruit pic, but typically look exactly like the pic of the smaller fruit pic you posted, and it’s name is easy to be confused with Thai, especially if just relayed orally (but I’ve definitely seen nurseries mislabel pots when the original tag has gone missing…).
They taste of “Lime ™”, no under or overtones or other flavours, just lime flavour.

The ones on the bottom never develop a center like the one on top. They eventually dry up and fall off. Last year, maybe 6 flowers had the center; from that I managed two limes. I wasn’t sure if they were self-fertile, so I did use a paint brush.

Sigh. I’m really annoyed that I’ve been using the wrong lime leaves in my Massaman curry for this long! 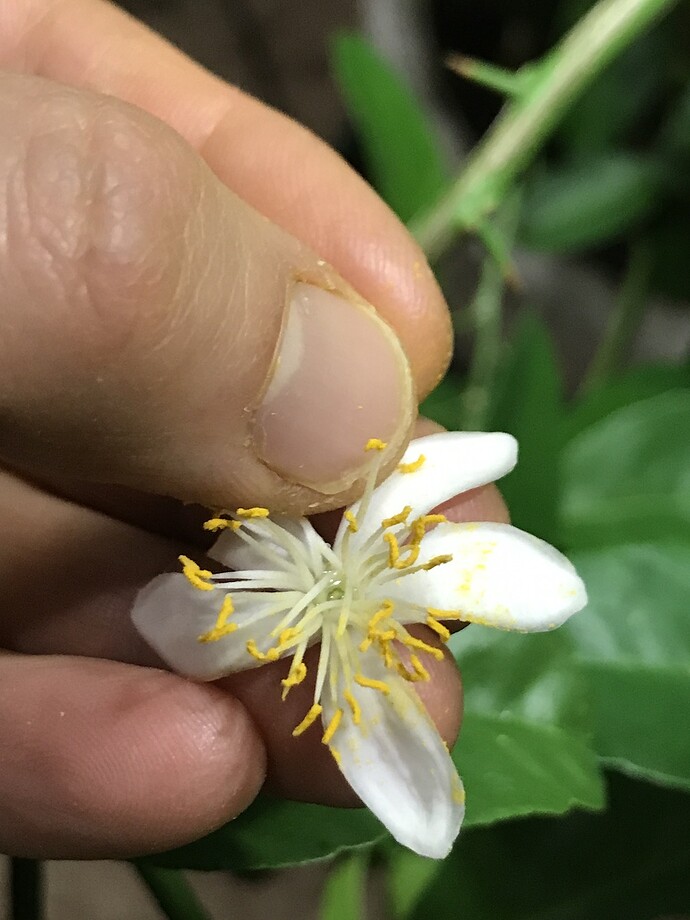