It sounds like you may be confusing vegetative “shoots” with fruiting “spurs”. They are not the same.

Spurs will develop from the shoots that you have been pinching off. ( and develop on their own directly on the arm).

You can let the fruit grow and still pinch off other vegetative shoots.

I don’t know what the equation is for espaliers as a tradition but I would want a minimum of about 15 leaves serving each fruit. On a tree you want at least 30 but the leaves aren’t harvesting as much light on a tree.

How about some recent photos.
It’s been almost 2 months and woul like to see how things are growing.

I’ve been a bit busied last couple weeks. I’ve pinched off all new growths at least once. Here’s the updates. 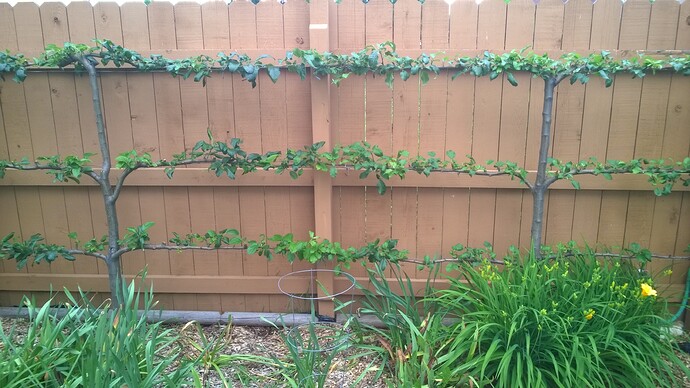 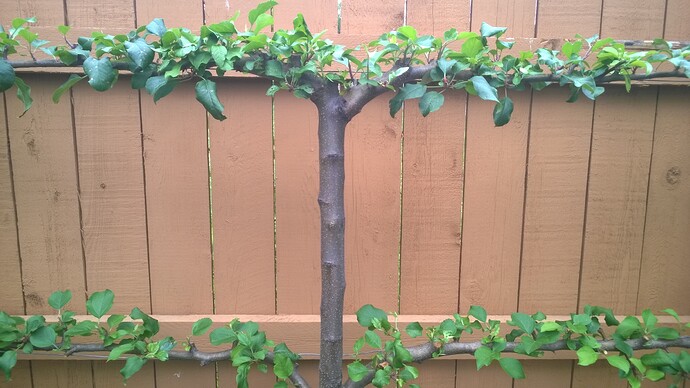 It’s scary feelings that I over-pinched everything! Just wondered if I made missed-steps again!

Thanks to Mike and Alan for your guidance.

Two more close-ups of the pinching activities! Not much high hopes, but at least, I still am hopeful… 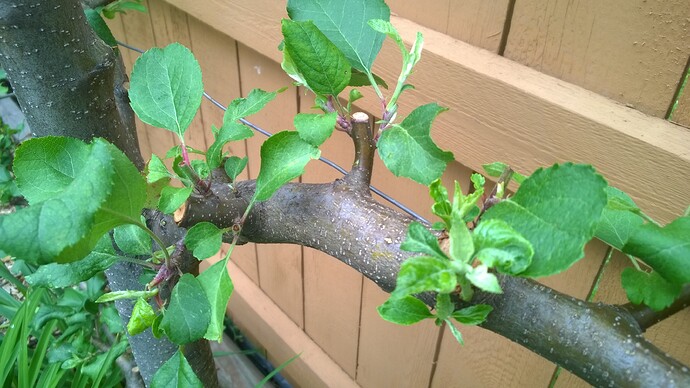 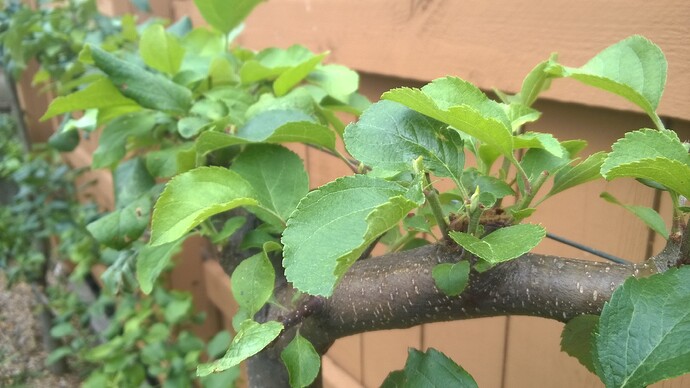 Please let me know if I have done correctly or need improved strategy. Thanks.

Looking very nice. Very much improved over what you had before.

You are forming new growth that will become fruiting spurs. Just keep pinching. You notice that you are getting 2-3 or 4 shoots developing from each stub that got cut back.

For the rest of the season until late August I would just let one half of the shoots from each stub to grow out a little and develop some leaves to gather and store some energy in the tree. These will be pruned back later when the tree is just about to go dormant.

Energy produced early in the year goes to grow the tree and the fruit, after harvest the energy use is switched more to producing next year’s buds and later still more of it is shuttled to the roots for winter storage.

After going through the initial shocks of loosing so much last year’s growths, I think I started to understand your instructions!

I’ll keep updating of the next few months’ growth on this post.

Thanks to you, MES111, Alan and others for your supports.

Perfect, that’s exactly what it’s supposed to do. You’ll be shocked at the blossom next season. This is the only way to get apple trees to fruit in the tropics also, or else those water sprouts get 8-9 feet tall and the tree looks like an Italian cypress. 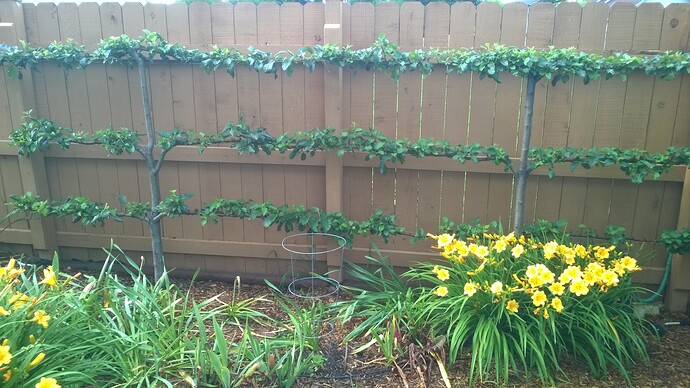 With so much rain lately, both trees are on power boost, …with aphids as a bonus! 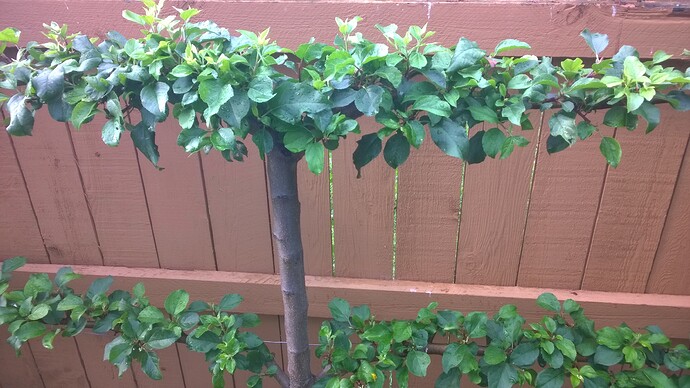 A close-up of the Fuji top rung 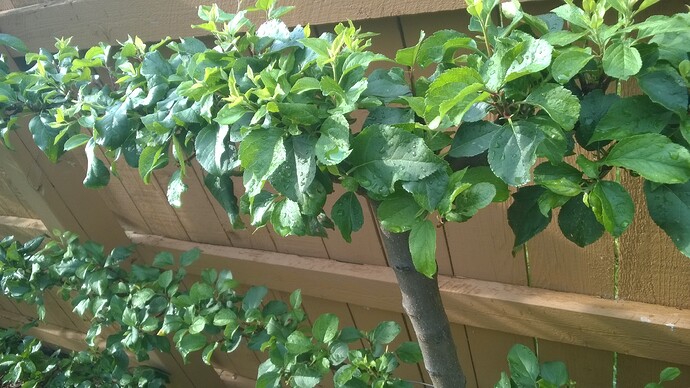 A close up of the Hudson’s Golden Gem 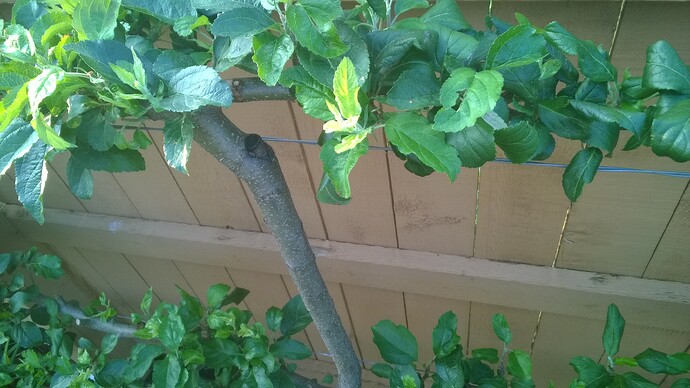 I think they look great. Some growth you have going! But it looks well trained in. Lovely.

Tom, you’ve gotten those to be absolutely, totally, fantastically beautiful!

Beautiful… and with the espalier setup… spotting and dealing with aphids, and other maladies, is much simpler too.

Your early fears proved needless. Just compare these to the photos you had at the beginning … nothing else needs be said.

Fears of losing years of growths proved further delaying any positive result if it ever going to happen. Treasuring but not knowing tree growth’s behaviors only piling up those fears.

It’s a lesson learned, Mike. I’m sure more lessons down the road for me to pick up as well!

Thank you for pointing out the right direction.

Tom, that looks damn nice…very, very neat, compact and out of the way. When they start bearing will you leave more foliage? It really adds to the ambience of an already nice garden space. Super impressed.
I’m going to do this someday, Good work my friend.

I did another pinching just yesterday. I’m going to slow down this process to allow for some growth as suggested by this board experts. 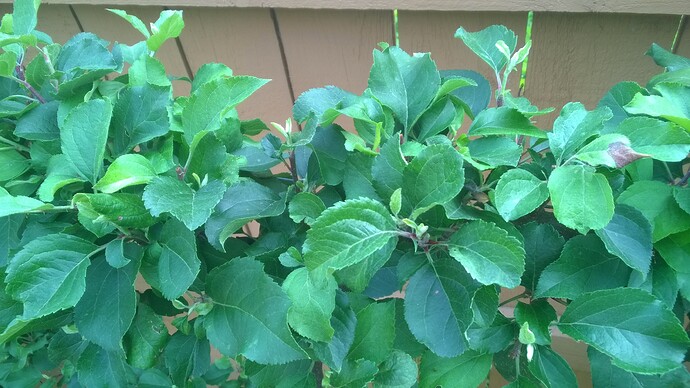 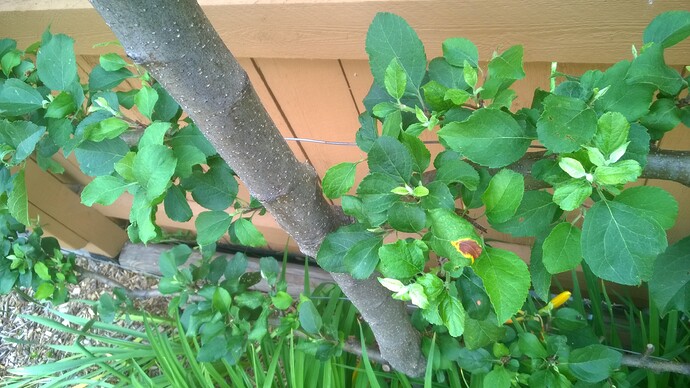 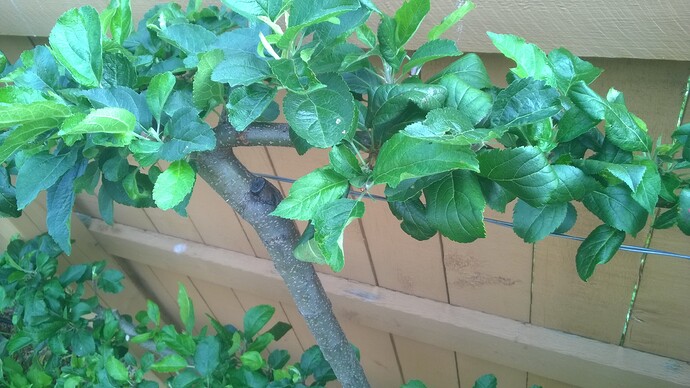 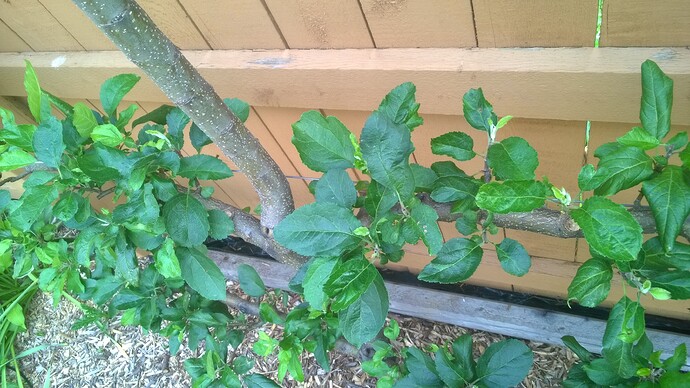 I did this same thing last year, and my Anna espalier apple is so full of fruit I can hardly eat it all. And, just a few years ago, when we moved in (2009), there was NO fruit. This tree is almost all shade all day long, too. You did such a nice job, Tom, your tree looks just beautiful.

This is a 6-in-1 apple espalier, the last of my apple espalier collection. I did the same pinching technique but have no heart to pinch away the few Gala that are left on the top right arm. 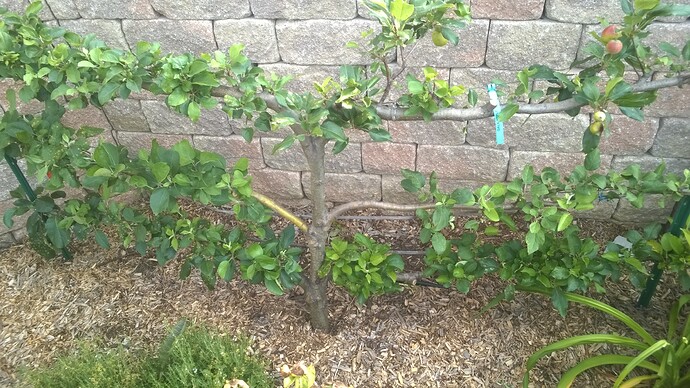 I do hope to get a few home grown apples next year from them! It’s been almost 5 years in the making and I still have yet seen a single bloom from either one!

With lush foliage as seen, I’m holding my breath until next spring! If they don’t bloom, I would be very disappointed. But if they bloom, I’ll lose my breath! You know what I mean?