Base on MES111’s advices, I’ve re-worked my 4 year old espalier apple trees this past weekend. The “crown” is pruned down to 1"-2".

Below are the “before” and “after” of the work. Hopefully I get it right this time and get me fruits next year! Or at least some flower to prove that I did it right!

I’ve also just read that Alan’s (Harvestman) advice to cut the big fat stubs down to the main arms to recycle its fruiting woods. Does it applied to my trees here that it never has any fruit to begin with? 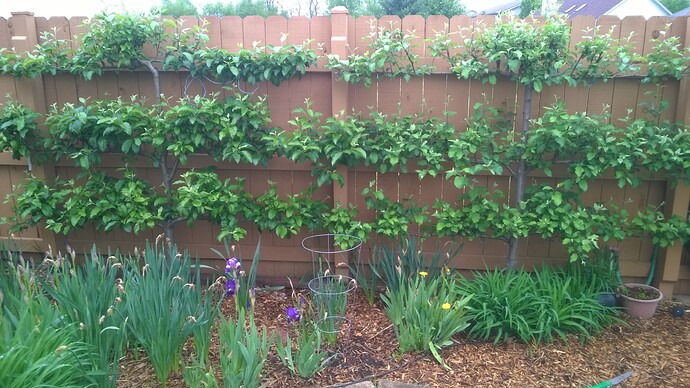 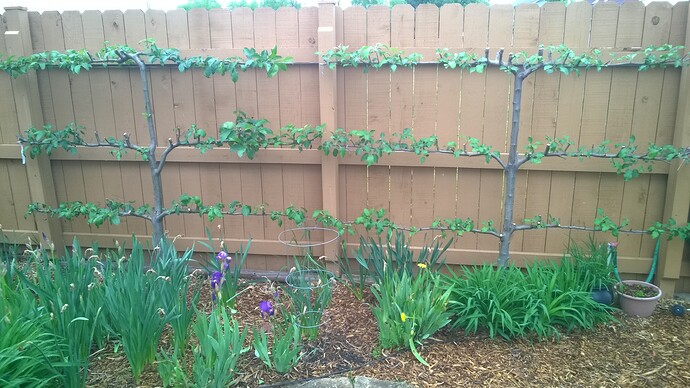 One of the two up close, after pruning - 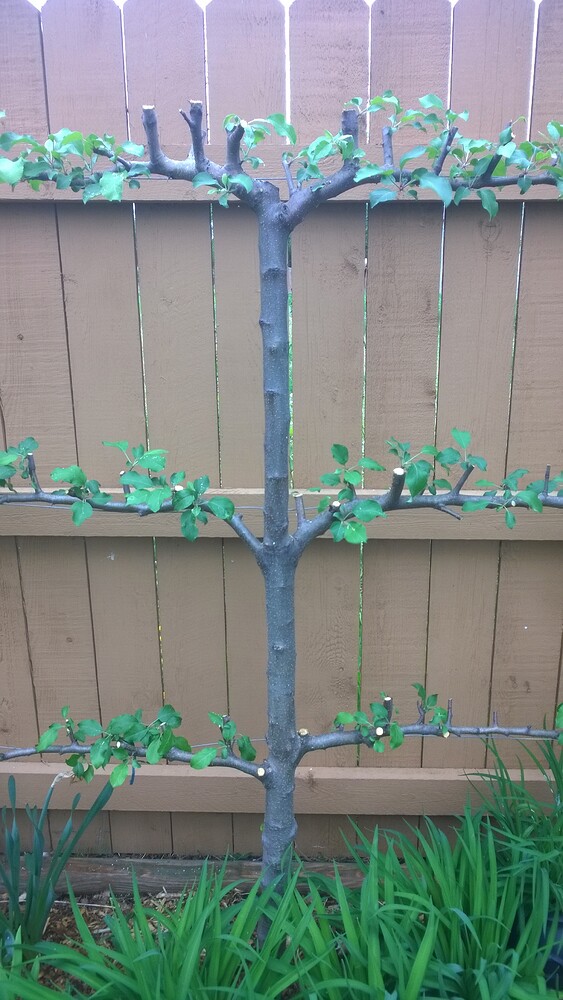 No expert just my 2 cent thought. Looks like you have alot of vertical growth which tends to be vegetative as opposed to fruiting.

I’m no expert on espalier. I’ve never even tried to do that. But I don’t think cutting off that much growth right now will give you flowers next yr. Nearly all the buds left, some of which may have set flower buds this summer, will be forced to become vegetative. I hope I’m wrong. But in general heavy pruning delays fruiting.

At this point, I can only cut more but not less. Even having to sacrifice next year flower/fruit, at least I hope to correct my mistakes of the past. It’s been like 4 years since I strung them up as espalier with no satisfied result, only unduly growth everywhere, especially around the center of the trunk.

Hopefully some espalier experts can chime in and give me further advices/guidance.

First, the 1/3rd rule might be helpful- that is entirely removing pieces off the arms whose diameter exceeds 1/3rd that of the arm branch, at least when there are thinner pieces nearby. You mentioned that you followed my advice but the pictures seem to show a lot of thick stubs.

On the positive side, I think I see some spurs (small leaf clusters) in the mix that come straight out of the arms that could produce flower buds this season if they continue to have adequate light and you don’t let vigorous growth from those thick stubs shade them from light- particularly in spring.

So it’s okay to cut all the big stubs falls under the 1/3rd rule to its main arms? Should I cut it down flat to the arm branches or give it some space like 1/2" or 1/4" stub? What to do with the stubs that has no nearby thinner pieces? Should I leave it alone or cut further like others?

I’m still learning too and some of this depends on the variety of apple, but all will function under the ratio rule, some spurry types just don’t require strict adherence to it.

Cut it just short of flush so you don’t cut into the collar (the tissue from the arm wrapping around the shoot). A very slight stub in other words- less than a quarter inch. If you need a shoot there then leave a quarter to half inch.

From the pictures, the Hudson’s Golden Gem is to the left and Fuji is to the right. I hope both these are suitable for the same pruning regiment?

Some fat stubs have a small cluster of leaves (future fruit spurs?) situates at about an inch (or more) higher compares to the main arm, should those be retained until the rest of the arms grow out a bit more before selectively prune again in summer?

Otherwise, I’ll cut them fat stubs to 1/4 or 1/2" as suggested. I’ll post another set of picture after the work is done, hopefully soon.

I agree with Alan. Those really thick ones can be cut down to barely a bub. you’d be surprised at new shoots developing right off the arm.

I’ll re-prune them soon. Hopefully get them right this time. Thanks to you and Alan for the advices.

Ouch! I don’t think I’d want to try Huds GM as an espalier. That one is an exceptionally shy bearer for me no matter how I manage it. I’ve rejected the variety for that reason, although it is an exceptional sweet- at least the few you may actually harvest. If you make it work you can teach me how to manage an espalier.

All those stubs will be pushing vegetative growth. As they do, keep pinching the tender tips off the new growth; you’ll have to do that 3-4 times in the season, sometimes even more, keeping it back to three leaves. This will make them set a fruit bud, which will calm down the vegetative habit and revert to a fruiting mode. It’s much easier the ensuing years.

It’s 4 years in the making so I want to at least grow a few more years to wrestle down my espalier routine before thinking of a conversion, if it’s fruitless as espalier.

Here’s the re-work after this morning 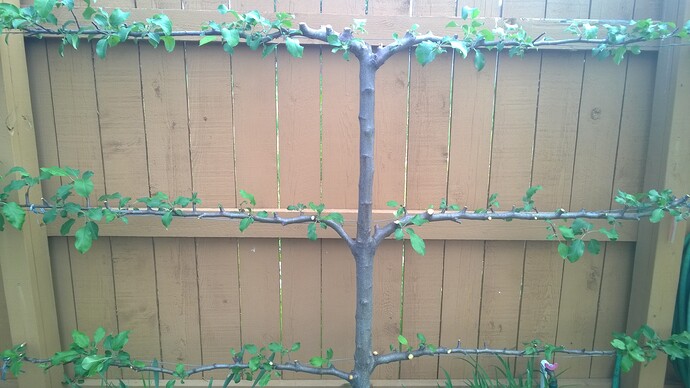 And two of them (Hudson’s GM / Fuji), re-worked! Most are down to half-inch stubs. 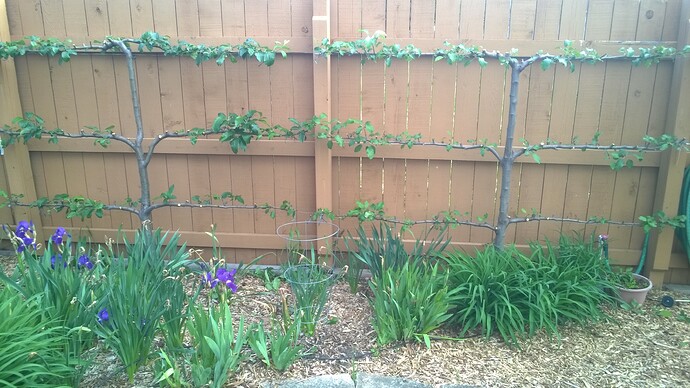 Pinch them anytime they get past three leaves in length; you may need clippers if they got too thick.

I have few more questions to ask. 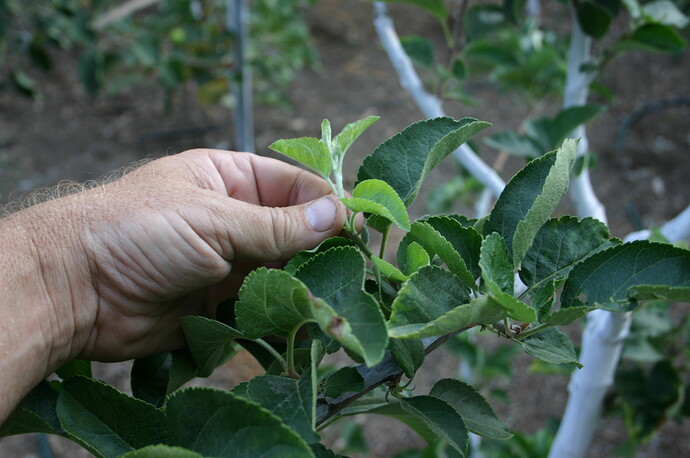 Also if you just do as A. N. suggests the tree itself will teach you much of the rest over time.

I don’t manage espaliers exactly as he does and adjust to the variety as well but there is more than one road to Rome and for establishing the tree his is pretty much the same as mine. I just don’t like to leave larger diameter shoots if I can help it and once the tree begins bearing I begin rotating bearing shoots in and out. Eventually even upper arms need to be removed and rebuilt to maintain a balanced espalier in my experience but that issue is long in the future if you don’t allow the upper arms to shade lower ones.

Thank you Applenut and Alan for your advices.

I have no clue and had been spinning around wrestling this subject. Now I’ll practice what’s taught!

I have another espalier apple (6 arms grafted with 6 varieties) that’s currently produces its first year fruits (only on 2 top arms out of 6). How do I allow the fruits to grow to harvest size if I keep pinching its new shoots?

Great topic. I have a trellis with 6 1 year old trees and 5 trees just planted this spring. Have learned a lot from this thread. Thanks