Now, there’s an idea. Lots believe things that aren’t so and should reevaluate.
Have a good one.

I will finally get to see the blooms on Redfield this year. It will be first to bloom, so hopefully there’s something to pollinate it with. I wouldn’t mind if it crossed back with Niewzwetzkyana, which is growing three trees away, but even that one isn’t going to be as early as Redfield. Nor is Granny Smith, which used to be my first bloomer until I got red fleshed apples.

Redfield has gorgeous flowers & little trouble setting fruit. I consider it partially self-fertile. The one I care for lives across the street, separated not only by the street from my back yard trees but also by this enormous two-story house.
It was the only apple blooming when it set its first 17 fruits. You’ve been warned.

BTW, I was just told I can get a scion of Erwin Baur. It is also early blooming; am thinking Nutting Bumpus, Redfield & Erwin Baur would make a nice trio of early bloomers giving a range of harvests & uses.
Redfield is a life-changer.

And in answer to a previous question: a scion of Nutting Bumpus came from Fedco last week. It blooms early, like its seed parent, Duchess of Oldenburg.

Sure curious to see when Otterson will bloom & ripen here…

With Otterson on Antonovka, may be awhile for fruit.
I sent somebody a scion of it, don’t know that I kept an extra, should have put it on B9.

(Actually, don’t know where my Otterson plant on Antonovka is at the moment…must have moved it to the farm…hope nobody has stolen it. Was on the list to plant in-ground this spring.)

I haven’t grafted Otterson yet, but got four pieces to play with. If yours goes AWOL, let us know. Chrisl or myself could get you restarted.

I’ll find time this week to look. I am getting forgetful I think, but quite often nobody around to keep an eye on things either.
I grafted about 3 pieces of wood, and the Antonovka took, but G890 did not. Just 2 buds per piece of wood, and both grew into good limbs. I snipped one and the other will be the trunk.

I need to get it into the ground, but I also need to spray. Could have done that today, but planted a rock garden today instead. Rain tomorrow.

(Speaking of Chris, three of the 4 apple varieties he sent me earlier this year are already growing…all grafts took. I only grafted the 4th one last night.)

Nutting Bumpus and Chris I found my Otterson on Antonovka roots…so it wasn’t AWOL, I just forgot where I put it!

And this one is blooming first, ahead of Redfield: 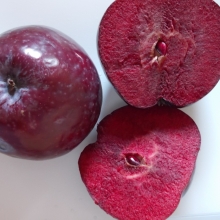 Otterson on antonovka grew vigorously for me the first year of grafting. More than redfield.

Yes, mine grew dual leaders from the two buds on the scionwood….both about 2 feet long.
One I snipped off (and shared the wood).

I had the apples in my nursery bed close together (too close), so they generally all made one nice leader. Otterson is taller most of them at maybe 6 feet tall and very thick (from a graft at 1’). I need to move it yet before things wake up too much.

Instead of a nursery bed, I have over 300 black plastic containers of various sizes for my “nursery” and can move them to larger pots as the need arises. I thought I was going to be cutting back on grafting this time, but considering “Frankentree” additions, and topworking a callery pear with 27 pieces of scion, this is going to be a record year for me, exceeding the 106 I did last year by quite bit.

Still have some skinny pieces of scionwood of some of the red fleshed apples, so plan to make quite a few more grafts in the coming week.

These things took off too quickly. I’ve been popping them out as best I can with a tree spade, but I’m too old to be too careful about it so they will have to suck it up!

In the future, I just need to plant my rootstocks in a permanent location. I’ve got a “red” frankentree that I’m working on. The otterson flesh looks so cool that I wanted to try it on a tree of its own.

Did I say Otterson bloomed early? I’ll have to go back and read.
Redfield blooms early, I don’t recall commenting on bloom time for Otterson…for the only info I have on Otterson is from the University of Michigan.
(The deep red one pictured is not Otterson.) (It’s the one that bloomed first.)

Burst me bubble why don’t you?

OK, if it survives my grafting I will notify everyone at the first occurrence of Otterson’s bloom and ripening.

Well, my Otterson won’t be blooming as I put it on Antonovka roots last year. So, I’ll look for your pictures and descriptions!
Serious, it (Otterson) must be pretty well colored, and the antioxidants were the highest of any red fleshed tested in the Michigan trials…as reported in Fruit Grower News about a year ago.

Simontornyai Veralma I have made two new grafts of the pretty deep colored apple…and if any fruit set, I’ll let one grow.

I’ve also made two ‘backup’ copies of WineKist already this spring. And Burgundy and Red Devil and Redfield, too. Also Alatau. Didn’t cut on Bakran this year, but it is pretty well established on my Frankentree, so maybe next year I’ll put it on B118 or something.
Nursha I have 3 of thanks for 2018 scions from one of our members in Arizona, also Pink Parfait. Have one Giant Russian, and then there’s Winter Red Flesh and Bill’s Red Flesh…and that’s just some of the 30.

Waiting to see how many of my six Odysso bloom, probably just the two that bloomed last year. (But they are not as early as some red fleshed…their Gala or Braeburn genes I guess.)

Quite a few of my early grafts are doing great and growing, but most still too early to report on, and I also have about 4 dozen rootstocks still to do something with. (I can always grow them and bud them in summer, or graft to them in 2021, so no biggie if I run out of scionwood.

Update…I kept wondering why my other apples were all blooming, or at least had large buds, and Odysso was ‘late this year’. Turns out, all it has are vegetative buds. After having 100 or so blooms last year between two trees I got from Jungs.

Oh, well.
I do have a total of 5 plus made it a main branch on my Frankentree…so next year maybe I’ll hit the jackpot.

This year I’ll have to be happy with Redfield having it’s first crop.

Does anyone have experience with Active Apple ‘Aroma Best’? This link is in German. https://www.baldur-garten.de/produkt/4774/detail.html?marketingActionGrade=327&campaign=affiliate_DE/zanox

I tried to order RedLove Odysso scionwood but the vendor told me the wood he had was too small. He suggested Aroma Best as a substitute, but there’s nothing about it on the internet aside from the German website info, which makes me dubious… if it was great wouldn’t more people be talking it up? Thoughts?

any first hand reports about the eating quality of red love apples? How do they compare with the best regular white apples?

I’ve been trying for 4 years…last year allowed 14 to set on 2 trees…and birds (I think) thought they were cherries.

I do have one little bitty piece of scionwood in the fridge…but thought I’d stick it somewhere before spring is over. I do have 5 trees already, plus a limb on Frankentree #1. But, Odysso didn’t bloom this year!

“too small” scionwood I’ve paid quite a bit for in years past…with care the grafts still take, it just requires additional time to fruiting.