That’s interesting timing for the blooming. I wonder why. I have Redlove Odysso too, good growth but no flowers this, its first, year. I agree with you on the bags. I put mine into organza bags, which saved figs from birds and maybe saved these red-from-the-start apples too.

Yes impressive, and so many flowers on both trees! By the way they say they ripe on September to October.

I hope that’s right about the ripening time. More time for size, flavor, and sweetness. I’m sure it will vary by climate. Meanwhile, I’m glad I got an early look and taste!

Red love odysso apple… I pick her too soon to show her to one familiar. Still too acid. 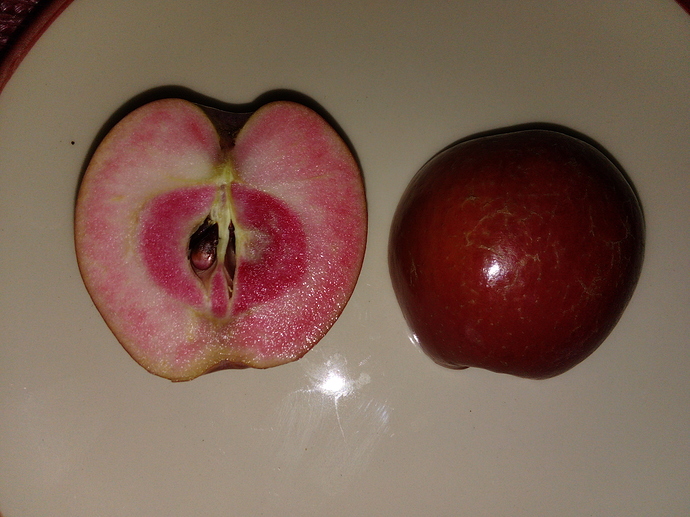 I know some one of us can breed a better red fleshed apple. Still, waiting to experience this one.

Purple Passion
Flowers are bright pink. Leaves have a reddish hue in the spring but turn green.
This has not been a vigorous tree for me but that may be the location… it’s in a flower bed so i don’t mind if it stays smaller. Pretty good as a landscape tree.
It gets just over half a day of sun.
I’d give the taste a five out of ten. It’s a bit dry, not too sweet. I think it would get better if i left it on the tree, but the squirrels have found it so it’s either pick today or watch the wildlife have them.
Next year I’m taking up squirrel hunting so maybe I’ll have a better report on taste later in the fall. 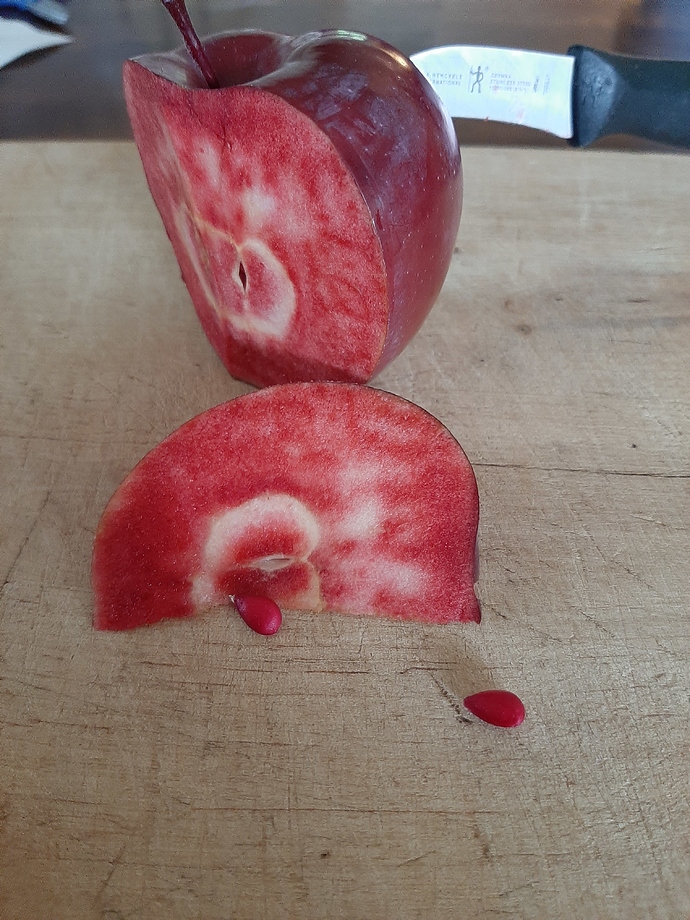 10-4 on the squirrel hunting…can in the country, but unfortunately not a lot of places in towns.

This Red Love Odysso was dropped by squirrels, so I decided to follow Marcus Kobelt recommendation to store it for a couple weeks and then taste it. Tried it today, it is so delicious! Tasted sweet, just like a cherry jolly rancher to me. Much better than the one Calypso I tried, that one was juicy, but very tart. 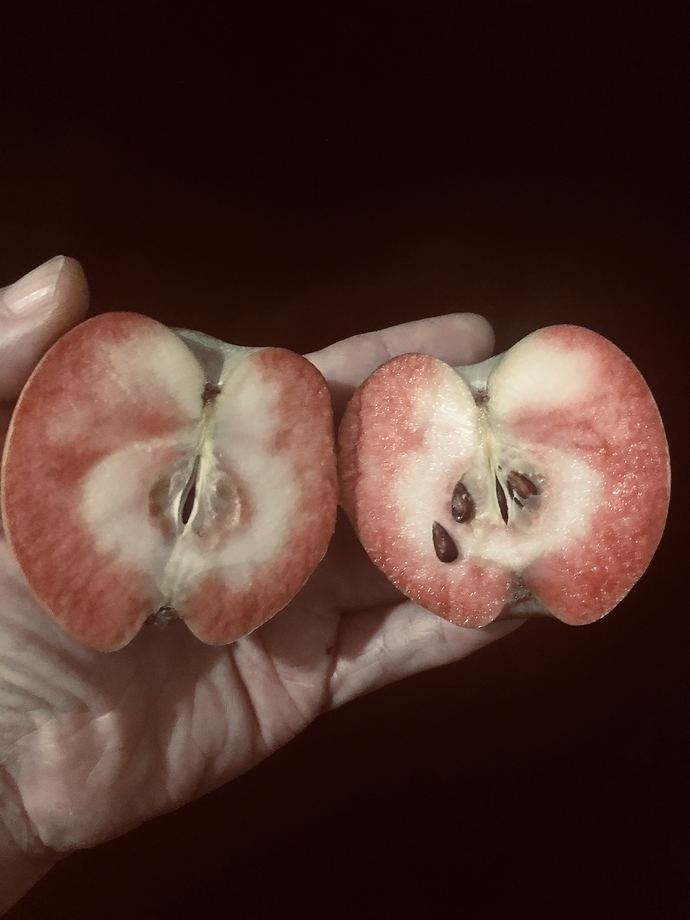 Here is Cranberry, not sure if anyone has already brought up this variety. It is about as ripe as it will get at this point for me. Just starting to drop from the tree now. Flavor is about 5 out of a scale of 10. It is about the size of plum. I think it could be a decent add to color up a sauce, or cider. 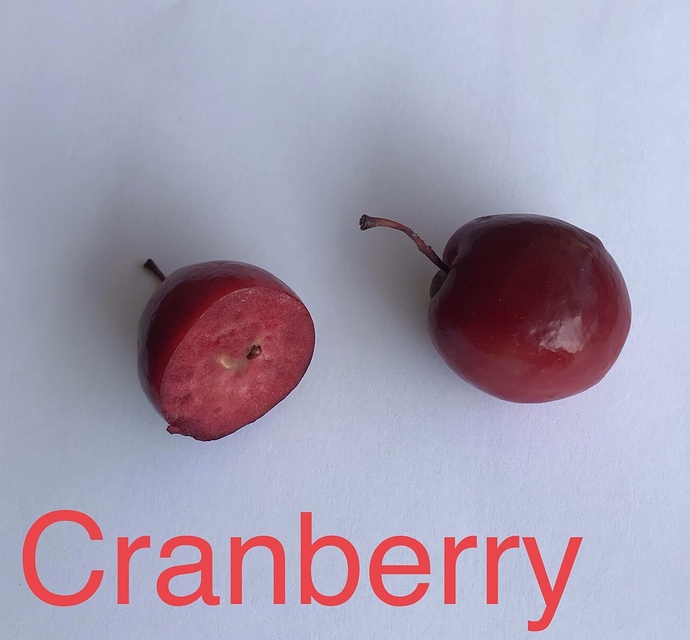 Today I picked a few apples. This was the first of my Redlove Era (second leaf) and the second apple from Redlove Calypso (first leaf). For comparison, some of the photos show Airlie Red Flesh and Liberty.

Both of these Redloves were quite small. They are young trees, so maybe that is part of the reason. I kind of suspected that, because I did not see comparisons to other apples.

These are I-phone photos. I forgot to send myself the photo of uncut apples. 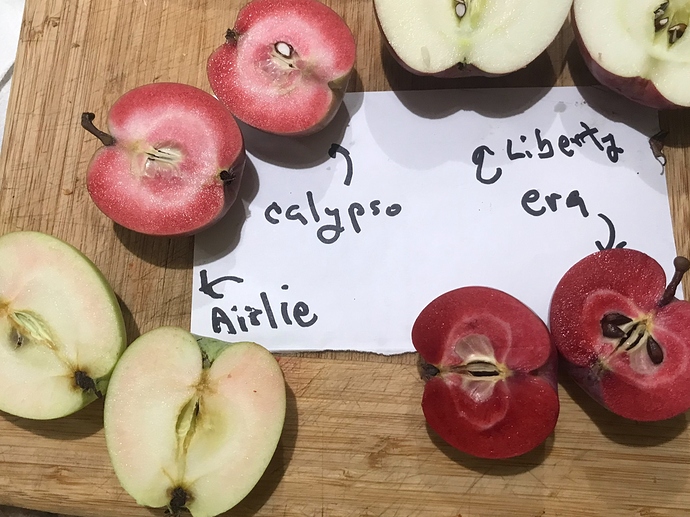 Usually Airlie Red Flesh is pinker than this one. This year the Airlies were my most scabby apples. The Redloves were completely disease - free.

Era came out much deeper red. I thought it was nice and crisp. Calypso was also crisp. 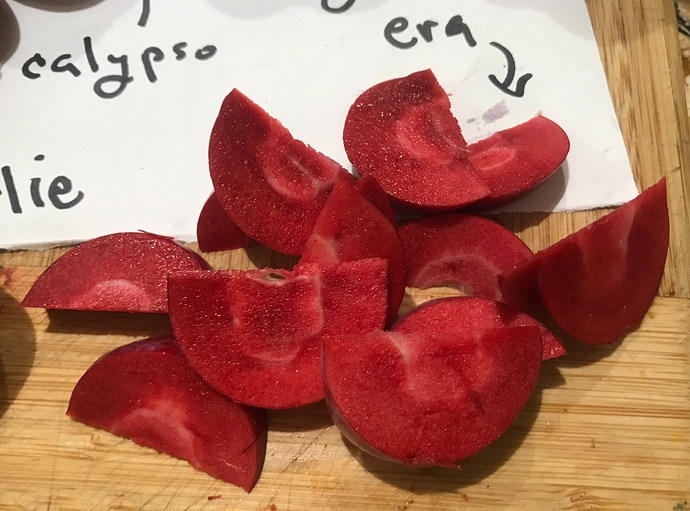 Airlie had a much more sweet apple flavor. Calypso was quite tart. I did not notice much special flavor or aroma. Era was tart and sweet, crunchy, and had a delightful flavor, sort of cherry or berry, I’m not sure which. Maybe a bit like cranapple. 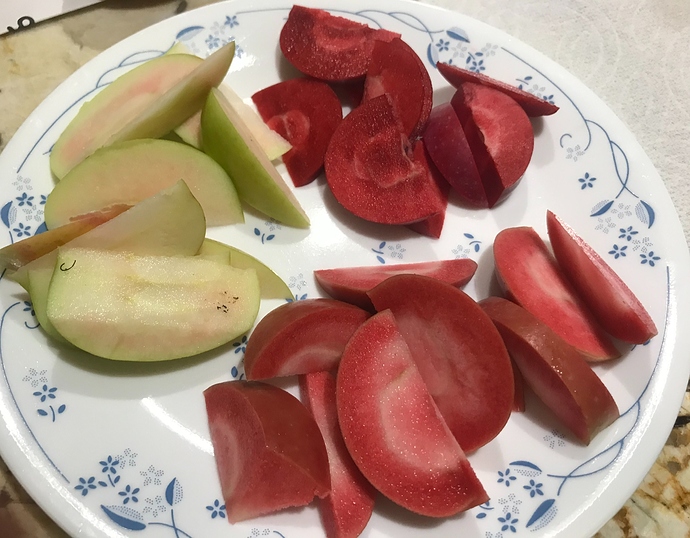 On the plate, the Calypso slices look larger than the Era. That is just perspective. The app,es were the same size. This is one moment in one maritime Pacific NW garden, one season, and is the first bearing for these small trees. I also have Odysdo, but no fruit this year. I’m planning to train them all as espaliers. The Era is already 2/3 of the way trained.

I had these on a white paper towel for a few minutes. They colored the paper red.

I wondered if there would be some astringency. I based that on one of the Lubera Redlove apples, Jederman’s (I think) being described as nonastringent, which was not in the other Redlove descriptions. nI did not detect any astringency at all.

Those are some beautiful colors!

The way I look at it is if a young tree produces a great tasting apple, then you know its potential. If instead, it makes mediocre apples for a couple of years, I usually give it a pass.

My red veins only ended up making three fruit this year. I noticed one had bird damage and was going downhill today, so I picked and ate it. So. Good. Like taking a Granny Smith for tartness and then giving it ten times the flavor. Ounce for ounce, it’s hard to imagine more flavor from an apple. Sweet with good tartness and just a rush of flavor… such a great apple!

Uygi, have you rated any of the other red fleshed apples? Interesting on the red vein.

Nope, that’s my only one fruiting. I’m hoping to get several varieties next year, though. I think I would have had winekist this year, but it was a rough spring here and everything bore pretty poorly.

Red love odysso apples piked on right time…
They are very sweet, a bit tangy and crunchy! I love them! 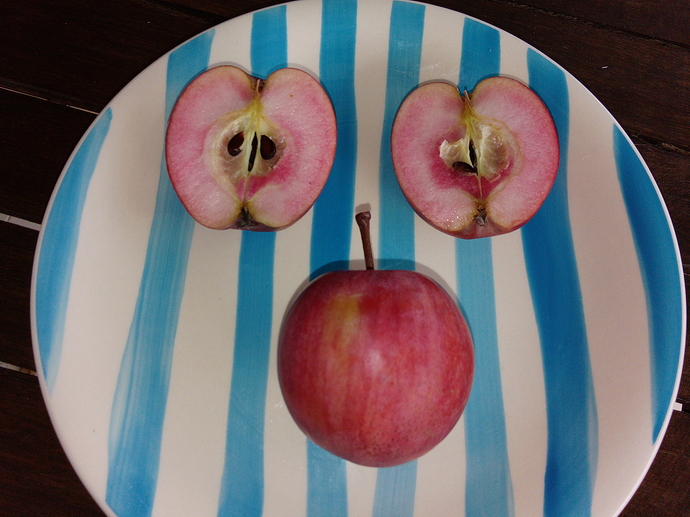 That is the first report on era apples for this country i have heard and we both are hot and dry!