The Fake Type of Nutrient Deficiency that is seldom discussed in textbooks and often not at all. It is NOT caused by lack of available nutrients in the soil but in my speculation is caused by the adaptation of citrus plants to cold subtropical winter temperature. These “symptoms” are more pronounced with the cold hardier types such as those of the Fortunellas that include Kumquats, Calamondins, Limequats and their hybrids. Lemons whose leaves that turn pale yellow as winter time approaches would be cold hardier and suffer less damage than those with dark green leaves. Come summertime, they’d all turn back to green and nutrient deficiency symptoms often disappear. The yellowing of the leaves as winter time approaches could be due to translocation and also lower root nutrient uptake and metabolism caused by lower temperature. With less functioning chloroplasts, the leaves would suffer far less chilling injuries in the presence of full morning sunlight and low temperatures in the morning. Correcting for these “deficiencies” in the winter time could be done via foliar application but that’s not advisable. During warm winter days, the treated citruses could go into new tender growth flush only to be damaged by frosts. Apply corrective action only if dangers of frosts are long gone and symptoms remain but often you don’t need to do anything as it will correct on their own and regreen as temperatures warm up. For zones 10 and above, the normal textbook nutrient diagnosis is fully applicable the whole year. 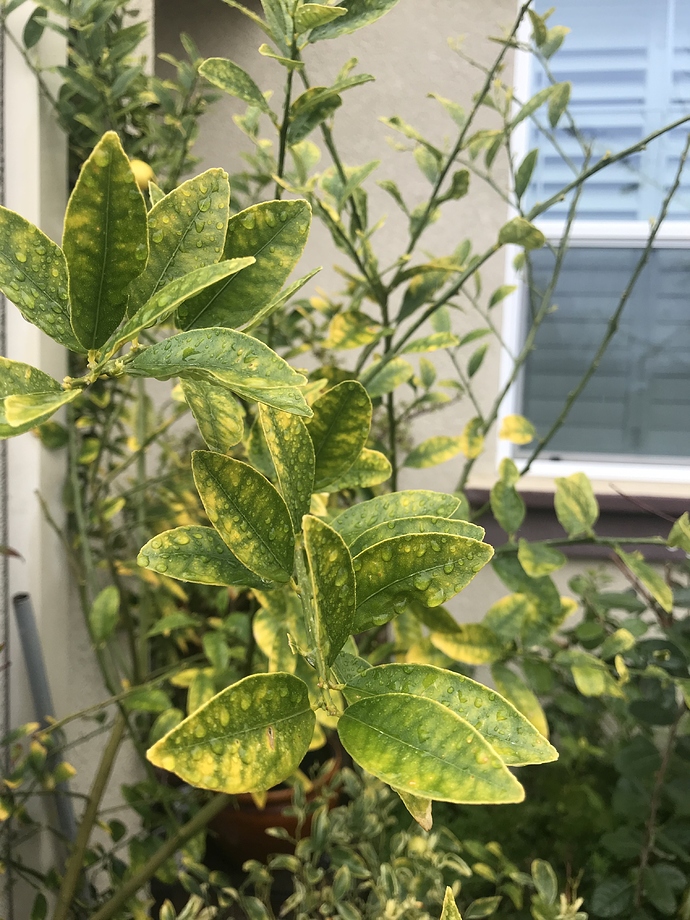 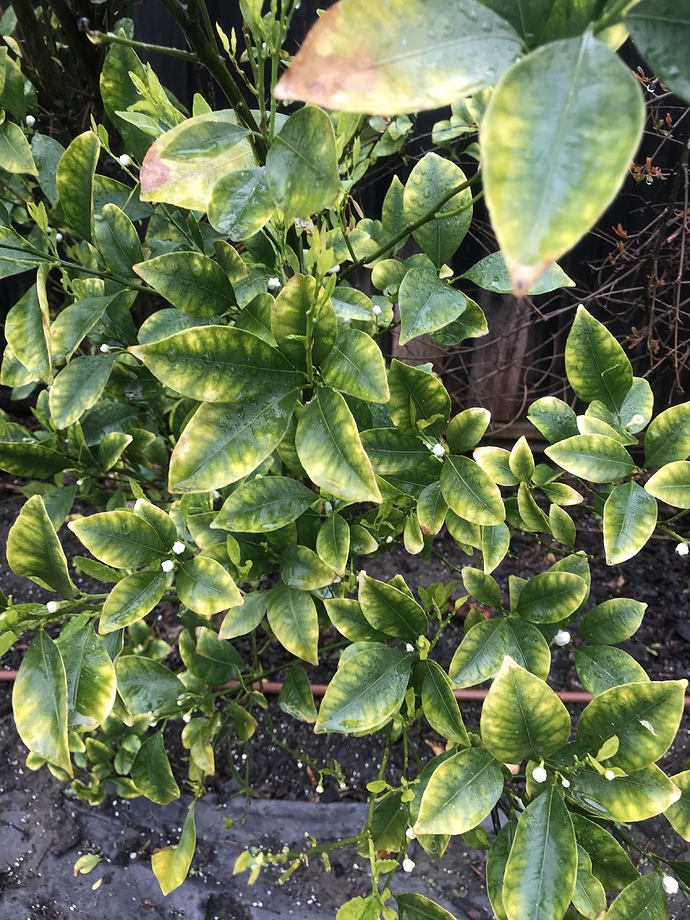 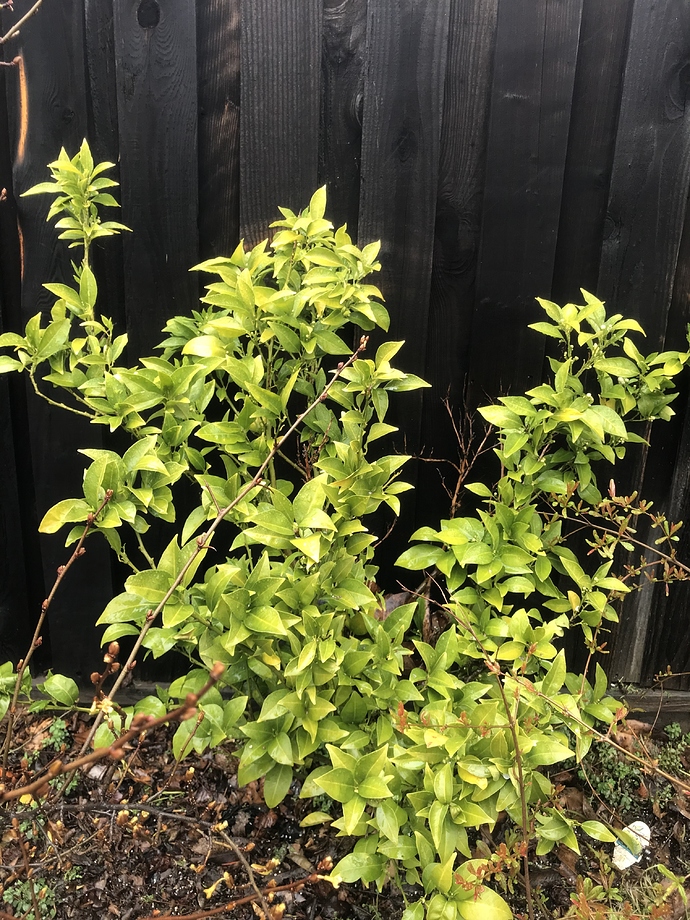 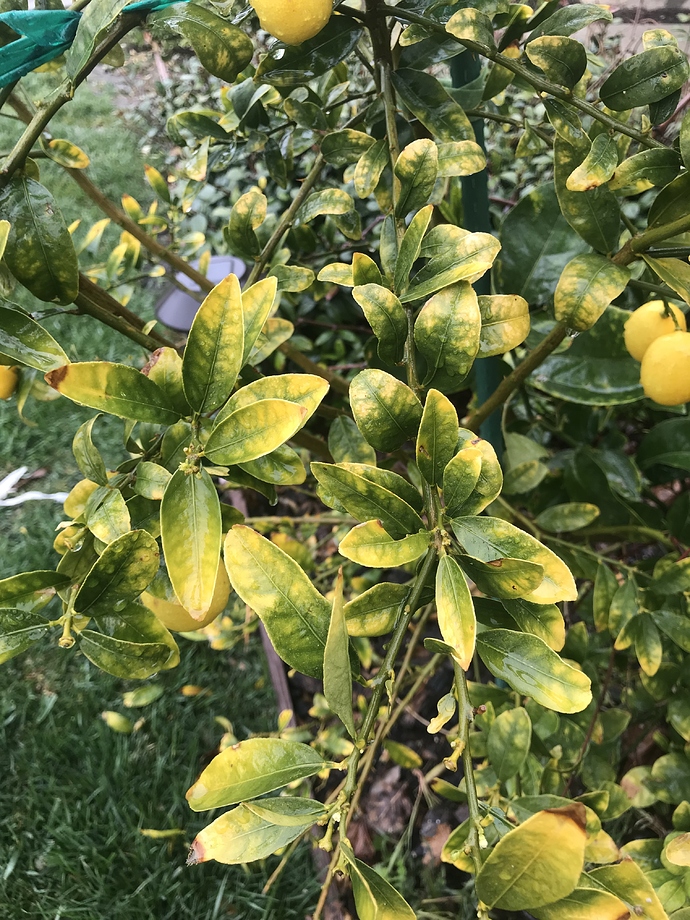 That’s exactly how my mandarins look like in winter. The Washington Navel orange doesn’t look that bad. I hope you are right!

More than 30 years of observations my friend! But give them a boost of fertilizers as soon as the dangers of frosts are gone! Oranges and some grapefruits aren’t affected very much.

@JoeReal – you’re correct that is not a nutrient deficiency but rather nutrient suppression from planting condtions, typically poor draining soil. When planted in DG and adequately fed those symptoms are not seen in winter or summer.

Perhaps in the warmer Southern California like Vista, cold temperatures aren’t much of factor but poor drainage is, especially that they get the rains during the winter.

My citrus plants are all on excellent elevated soils with good porosity for drainage. Never had a problem even if it rained for weeks at a time. The suppression that you think is actually lowered root nutrient uptake caused by low temperature in the winter, or in conjunction with translocation.

Having studied plant adaptations in Agroecology, especially the fortunella types, I would say it is an ecological adaptation to the cold temperature. This is also noticeable on leaves of trifoliates. They either turn yellow or drop off. The deciduous plants dropping off their leaves as winter approaches is an ecological adaptation and before the leaves fall you see all sorts of nutrient deficiencies as nutrients are translocated into the stems, trunk and roots. Some cold hardy citruses tend to be deciduous, such as the Flying Dragon.

All the rain we have had has not helped but we sure need it! We have had close to 5 inches here in the last 3 days. A lot of my trees are looking yellow too. My apricots are really sad again this year. Wish we could get our rain earlier in the winter!

We have had close to 5 inches here in the last 3 days.

Surely, 3 days of rain isn’t a factor in causing the yellowing. The effects isn’t very quick, and if any should show a few weeks later. The cold temperature has been with us and the effects are gradual.

Agreed, but it’s been pretty much non stop rain all month. I like your observations, but I think too much water factors in a bit too.

Yes. Prolonged water is surely to affect the plants. That’s why appropriate rootstocks need to be chosen well especially if you are weighing between drought and too much water. I often select for drought tolerance as waterlogging occurs during the winter for us when plants tend to be less active.

Joe, my experience with Citrus spans the entire state – both private and commercial growers. The photos you presented show leaves with green veins and yellow panels. This is classic nitrogen lockout. A raised bed on top of clays doesn’t help much in the winter – not because of cold temperatures on leaves but because of poor underlying drainage of saturated clays.

Here are my mandarins planted in poorly draining soil (more like concrete sludge). I dumped heaps of compost and piled up a ton of wood chips in that area. The trees seem to be responding to the treatment. But yeah, you can see the nutrient deficiency in the older leaves. 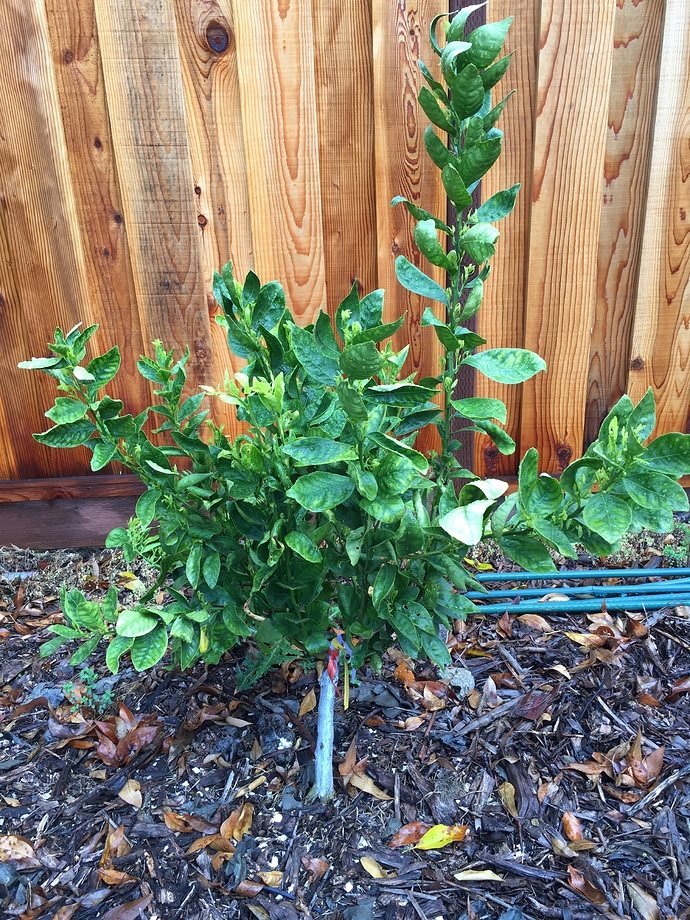 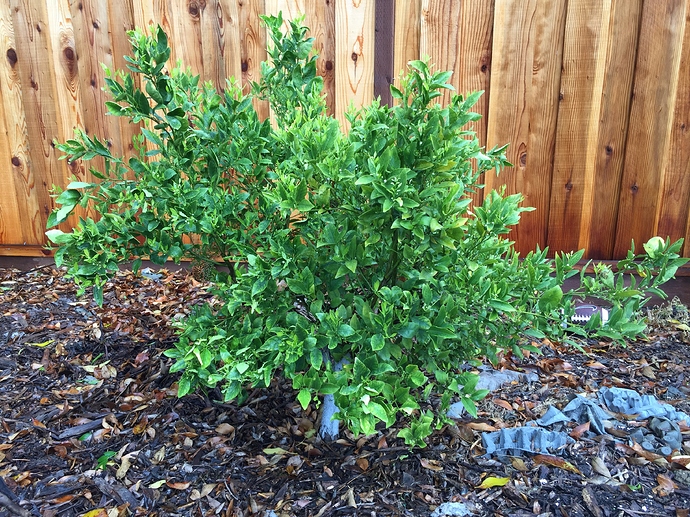 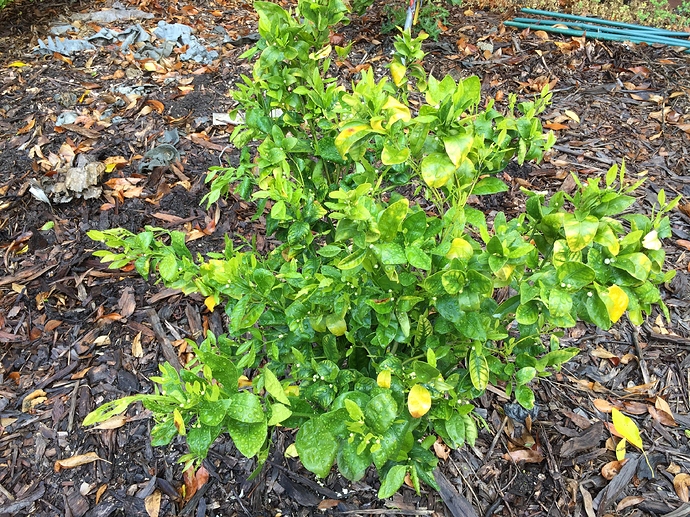 A raised bed on top of clays doesn’t help much in the winter – not because of cold temperatures on leaves but because of poor underlying drainage of saturated clays.

I think it is about time to rethink this. I can subject my garden beds for inspection. They’re from a specialty garden soil of excellent porosity that I have ordered. Proper mix of sand, silt, compost with gypsum, vermiculite, decomposed lava rocks. Excellent porosity. The yellowing doesn’t happen in the early summer to late fall and poor drainage is an impossibility.

Of course we don’t discount the fact that poor drainage is also a big factor. In my case it was eliminated and though hard to believe must look for alternative explanations and I have given them from ecological perspective. Low temperature slows down metabolism, that’s a fundamental ecological fact.

The observed yellowing during the winter is very commonly observed by many of us rare fruit growers in the northern climate and we have observed it with other subtropicals and tropicals as well. Even the annonas such as Cherimoyas, Atemoyas get it, also star fruit, wampee, ooray… And it can’t be fixed until it warms up.

Joe, you’re an excellent software engineer and an enthusiastic horticulturist. When you planted your citrus et al did you dig planting holes 4’ in diameter and 3+ feet deep, then fill them with water in the winter time to see how long it took for them to drain? Do you supply your citrus with a significant source of nitrogen (not mulch) at least twice per year? Do you keep the soil pH in the plant root zone between 6 and 6.5? Is the root zone free of anaerobic pathogens? If not, then I think there are variables missing from your “experiment”.

the most obvious ‘fake type of nutrient deficiency’ in citrus may well be the color/hue differences between fruits grown in cool regions vs ultratropical regions. Not sure if anyone here has grown valencia oranges/tangerines/grapefruit in southeast asia, but most citrus there retain their green coloration(pretty much would have the appearance of yellowed foliage posted above) even when fully -ripe and already at their prime in sweetness and flavor. Most reach the wrinkly and over-ripe stage but still retaining yellow green or greenish-yellow coloration. Apparently cold temps destroy certain chloroplasts, so other natural pigments(such as reds, oranges and yellows get unmasked). Even here in usa, oranges are a deeper orange in cali than in certain regions of florida.
thus said, if the fruits were actually leaves, oranges in california would be deemed having a ‘worse case of nutrient deficiency’ compared to those in florida

@jujubemulberry –
Larger citrus (oranges included) ripen in the continental US in 12-18 months, while in the true tropics in 6-9 months. Lack of color in the fruit skins is due to potassium deficiency – a serious problem in the Philippines. Again, single-value assumptions about coloration are not helpful.

Again, single-value assumptions about coloration are not helpful.

well you just posted a single-value assumption. Moreover, you can’t steer a valencia orange into turning ‘deep california’ orange even in the most fertile volcanic soil if growing them in climate conditions of ultra-tropics, even with foliar fertilization and soil amendments. That’s impossible @Richard. Only cold nights/cold winters can do that for you.

Richard, I am not just a software engineer, I have graduate degree in Agronomy and Agricultural Ecology, and I did a lot of plant phenological modeling and Expert Systems for Agriculture. In modeling plant physiology and phenological stages, we’ll have to know much more than the variables you have mentioned.

So I really know what I am talking about and know when I could not find my proposed theories here from literature and encourage people to investigate on it. I am so glad I took Agroecology as it has given me a better perspectives in looking at problems beyond what individual disciplines can do. I’m not insulted if you don’t believe that I know about soil porosity or soil pH the fact that I built many mathematical models of them, including the floodwater chemistries and diurnal fluctuations of pH published in various credible scientific journals.

Here is another proof that it would be very hard to dispute. Why would a multi-grafted citrus tree, mind you, I was able to graft 101 different kinds of citruses in 1 tree, would have its lemons, kumquats, calamondins, trifoliate hybrids have yellow leaves on it while the oranges and mandarins grafted on the same tree do not? They all regreen when it warms up and there is practically nothing you can do to correct their yellowing until it has warmed up. They have the same roots, and the idea about nitrogen being locked up in clay don’t hold. While it is a factor there is obviously more to it than that, and that’s what I call opening our minds about ecological basis of adaptation to the cold that is unique for each cultivar. I make a lot of multi-grafted citruses, and no matter where I plant them, most of the responses of the cultivars on one tree with respect to the cold are the same with different rootstocks.

It is okay if you won’t change your mind, but for me it is an excellent observation that is worthy of further investigations. Many of us growers of citruses here in Northern California have observed this.

Many of us growers of citruses here in Northern California have observed this.

And yet when I visit commercial groves and private plantings in northern CA I rarely see it – and when I have the issue has always been poor drainage.

to make this correspondence even more interesting, here’s my private planting in southern NV. A couple pics below of my ‘blonde bombshell’. She’s so lush and often steals the lime-light(if that is a pun) with her bumper crops, but the question is–
does she have a genuine deficiency or a genuine-fake deficiency?
if there’s anything certain, it is that citrus and their chloroplasts have intriguing idiosyncracies. Even more intriguing is that blondie seems to hold on to her leaves more intently(in borderline freezing or sub-freezing temps)than her brunette sibling who has no scruples about stripping at the drop of the mercury 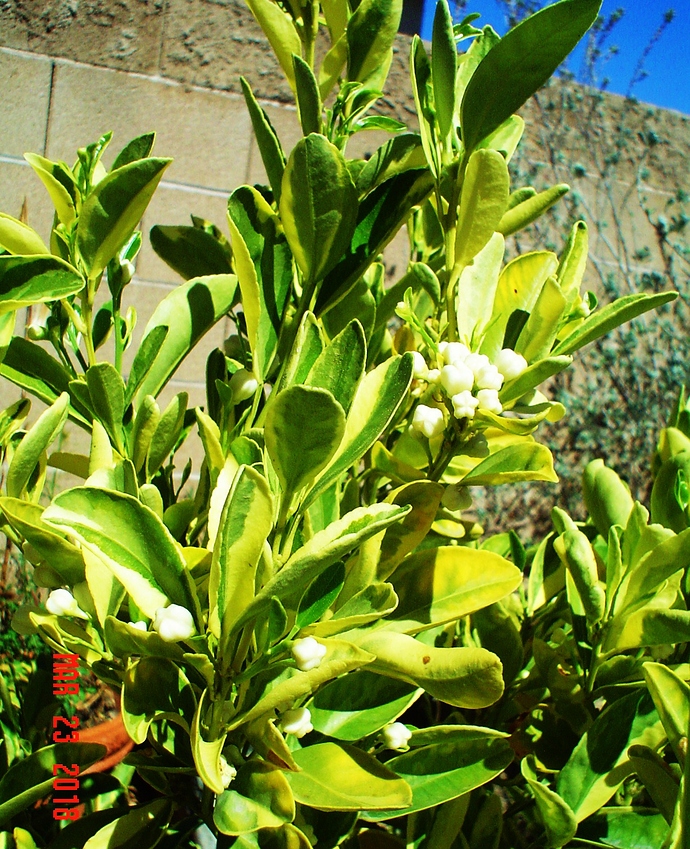 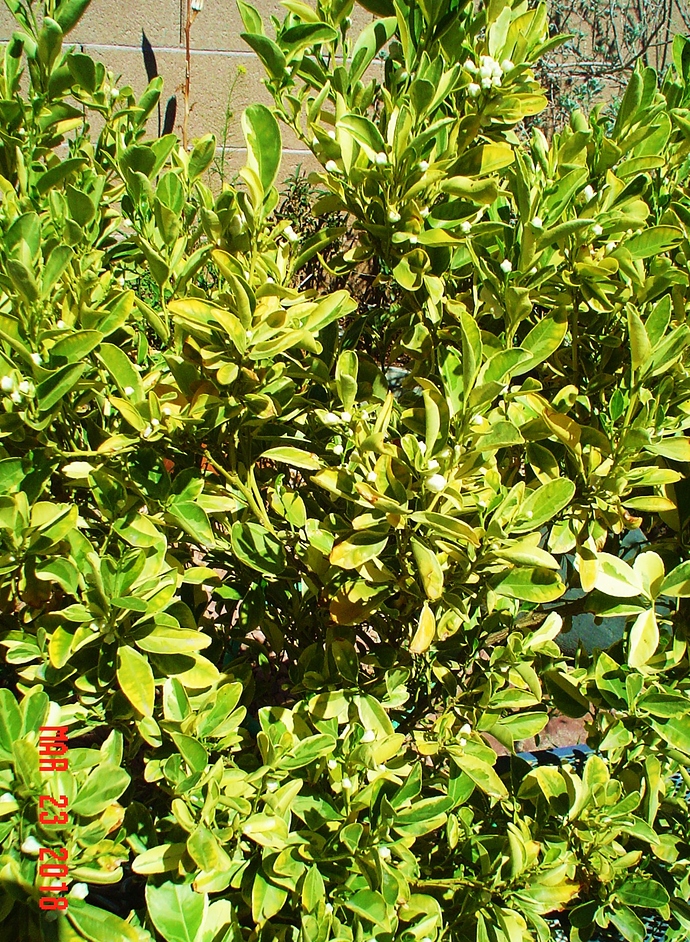 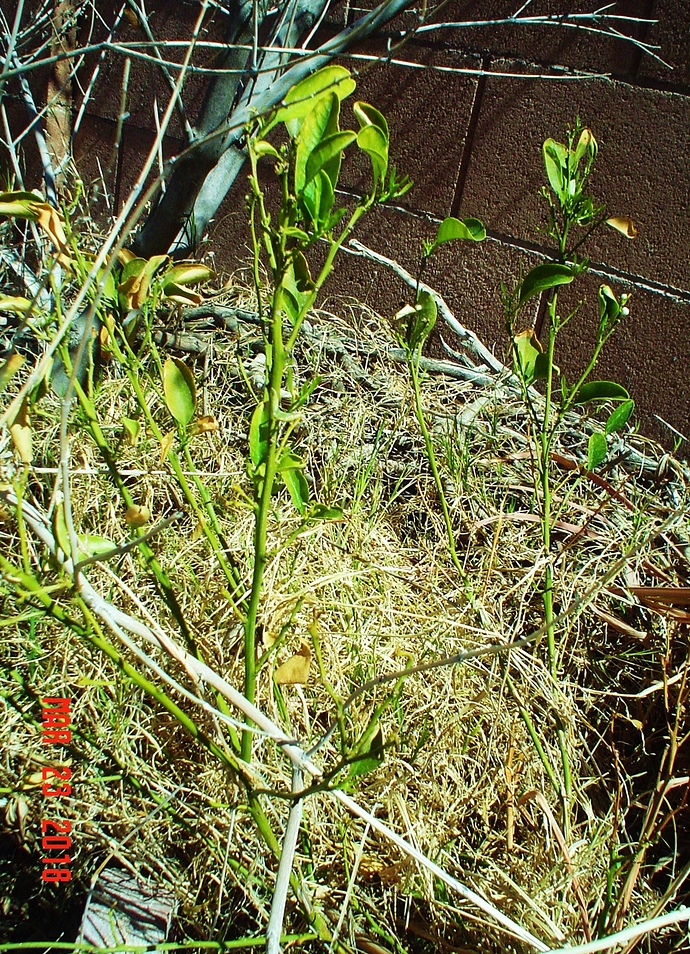 Agricultural studies of volcanic soils in Malaysia and the Philippines point out that the have good drainage but are low in mineral nutrients esp. potash in a form that plants can uptake or soil biology can break down.

even with foliar fertilization and soil amendments

Potash is difficult to deliver in significant amounts via foliar and typically processed by plant roots to produce enzymes and proteins that increase fruit quality.

So that leaves the soil amendments – were they just compost or was potash included?