Today we stopped by a friend’s and they said they’d gotten some real nice apples from a wild tree in a nearby field, did I want some, there might be some left? Well, I wan’t exactly dressed for an apple picking expedition on a barely above freezing rainy/snowy day but of course I said yes. I really didn’t have high expectations; seedling apples are a dime a dozen around here and folks interpretation of “nice” are widely variable. But to my surprise there was this moderate sized tree that was still very full of very nice apples, and not the usual seedling types we have around.

But the different shape and quality makes me wonder if it might be a named planted variety. I don’t know how old it is, maybe from the early to mid 1900’s. Though neglected and in a wild field it wasn’t that far from an old farmhouse, in fact it was pretty much in the backyard, and you could see it had (and could still hve with some work) a nice form. And the apples were pretty much insect and disease free and decent sized. A couple of buckets were quickly filled and I was happy to head home to dry out and warm up. Unfortunately, the flavor doesn’t equal the looks of the apple. Husband thinks they’re fine fresh but I think they’re rather tart with just a little sweet though they are nicely crisp and juicy. They’ve gone through a number of low 20’s nights and still in good shape. I think they’ll be OK for sauce. I looked around the interenet photos but I couldn’t find anything that matched well.

Does it look familiar to anyone? Thanks, Sue 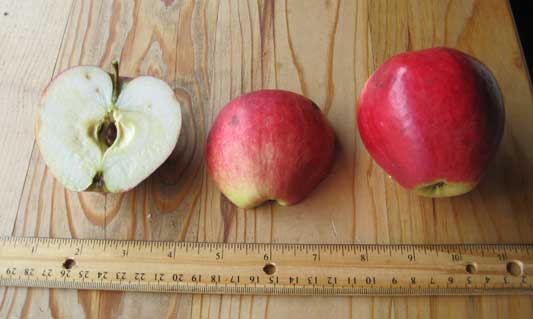 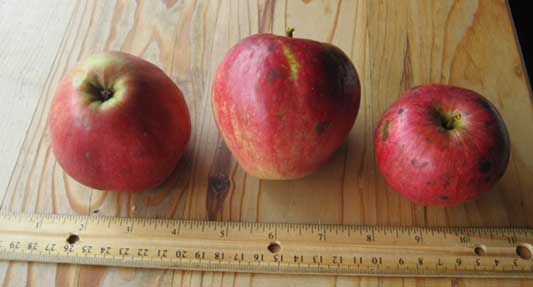 Thanks for the suggestion. I did think of that but the apples I have are more round than oblong which the photos online of sheepnose seem to be. I’ve never seen one in person though there are some old trees of that variety in the U.P. Reports online mention sweet, and rich flavor, which these don’t have, unfortunately. Since these have such a distinct shape – heart shape, or cat face shape - I thought it would be easy to ID but so far I haven’t found anything similar online. Maybe they are indeed a seedling of something.

I agree its not Sheepnose. Its a striking apple and I don’t recall seeing anything exactly like it. If it was a little better tasting you’d have yourself a real find there!

Whatever it is, it is apparently northern hardy

Should be a good one to graft for folks up north.

Around the turn of the century, there were a good number of Russian apples imported into the U.S. to try to get apples in the coldest climates. Some of them are still with us today, like Livland Raspberry and Antonovka. A lot of them, however, have been lost to time. I did a quick little search on line and discovered in a Wisconsin horticultural journal around the turn of the century a gentleman who named about 50 total Russian apples and when they ripened. Most of them I have never heard of.

If you are very interested, you could go down that road and research more. Otherwise, it seems likely to me that this could have been one of the cold hardy Russian apples that were imported at that time.

I’ll probably never know for sure if this is a named variety or a seedling but the closest possibility I’ve found so far is Scott or Scott’s Winter. Thankfully after a few days my apples warmed up and had more flavor. Still tart but not excessively sour. I’m hoping they’ll be good keepers and develop more sugar in storage, especially since I have a half bushel of them. But since my Dudleys are now done, the Black Oxfords are for later, and I have no others fresh I’m happy to have these attractive unknowns.

I also realized that this tree isn’t necessarily real old. I noticed today the trunk size of our 40 yr old Beacons, which, since we planted them, I don’t consider all that old. They’re bigger. Funny how one’s perception of “old” changes as the years go by.